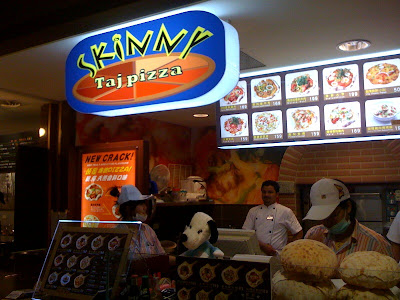 There's quite a bit of change in the 101/Taipei City Hall MRT area- the addition of the Taipei City Hall bus station center and addition/extension of the MRT station there has another food court-looking space to explore. Later this year (or next?) will also add the Le Meridien and W Hotel to this busy Taipei area. Looking forward to seeing what restaurants open up in those hotels.
Posted by joanh3 at 12:17 AM

The skinny Taj Pizza is new and attractive. It is skinny and cracks. It is good for people on diet. Less oil, less cheese and good for health.

Sababas at Yong Kan Park is shutting down, maybe moving, but they said they are closing soon.