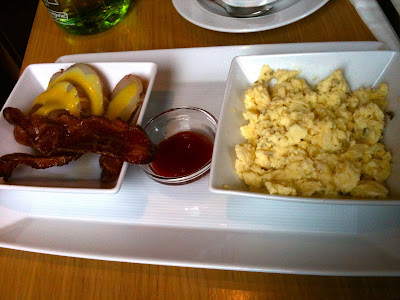 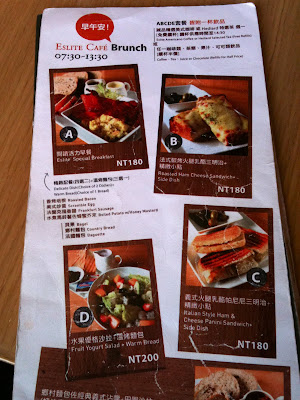 When I'm jetlagged in LA and wanting an early breakfast at 7am (or earlier), I have a bunch of options to hit up like IHOP. But if you're looking for eggs and bacon or pancakes at an early hour in Taipei, it's a lot harder (apart from pricey hotel breakfasts or McDonalds!)

One peaceful place you can grab your coffee and toast is the Eslite Cafe which has a few breakfast options and opens at 7:30AM. Brunch sets are NT$180-200 and is available daily until 1:30PM. You can also order off their regular menu, as my friend did, getting a sandwich that had way too many sprouts for me and a hot chocolate that probably cost as much as my set. 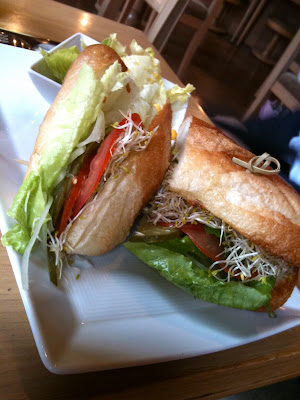 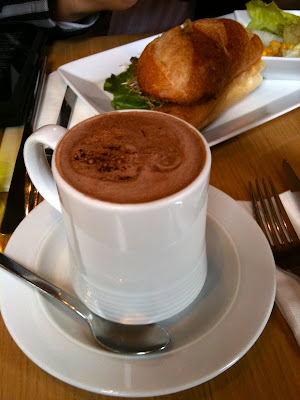 Instead, I got set A, which has a deceiving picture on the menu, brimming with food. You're only allotted the choice of 2 of the 4 things (bacon, eggs, sausage or potatoes) and 1 choice of bread (bagel, country bread or baguette). After some convincing, the waitress let me trade my starch choice from bread to potatoes. 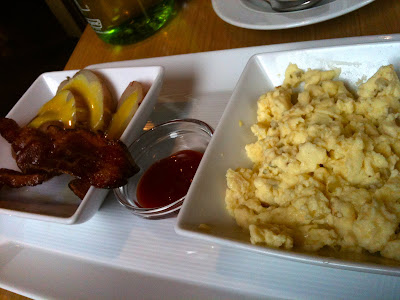 As you can see it's not really a generous amount, and even worse, the bacon wasn't crispy.

More filling sets are probably the croque monsieur or ham and cheese panini. Overall, the taste was not too bad, but it's most likely that they are just reheating whatever was premade since there isn't really a kitchen in that coffee shop space. But on this early morning, it's a nice space to enjoy an early breakfast and then have an excuse to browse the books afterwards.
Posted by joanh3 at 9:38 AM

Aw, I'd been hoping the cafe would be good! I've been to that Eslite branch a few times but never eaten there :P

hi sparklewolfie! i usually grab stuff from the food court downstairs. or go to the xinyi eslite. but the cafe is open early.