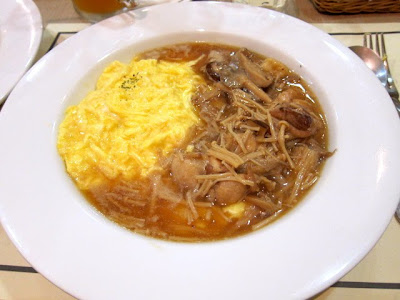 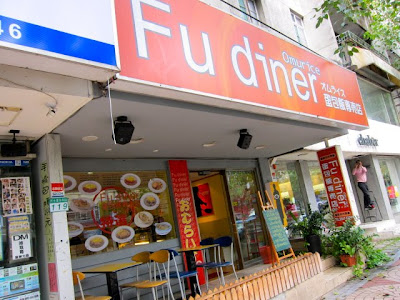 If you've wandered around enough Taipei food courts, you've probably spotted an "omu-rice" dish or two- looking like an oversized omelette drizzled with ketchup and stuffed with ketchup flavored rice. But have you ever tried one? I think before eating at Fu Diner, I've had a bite of one, once or twice, so it was with curiosity that I checked out the menu at Fu Diner, a whole restaurant dedicated to different variations of omu-rice. 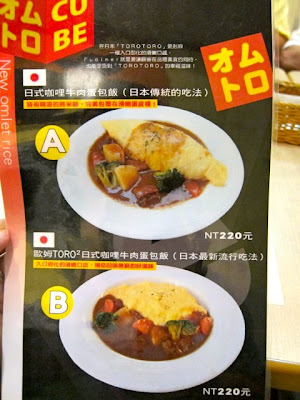 With about a dozen ways to choose from, little international flags mark the flavor profile of the various omu-rices on the English and Chinese menu-- Japan flag for the traditional japanese rice omelette (crisscrossed with ketchup!) or Japanese teriyaki chicken, to the French rice omelette with beef stew or baked with cheese, to the Indian rice omelette with spicy pork curry sauce. 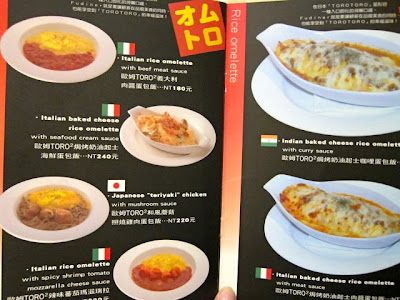 I order a set with my lunch, which is an additional NT$70 for soup, salad and a choice of milk tea/fruit tea/tea. You can also get a set with dessert and tea for NT$70 extra, or add everything for NT$120.

The corn soup is creamy and sweet enough, and the salad has more corn on it. 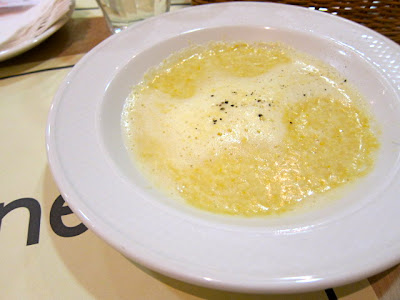 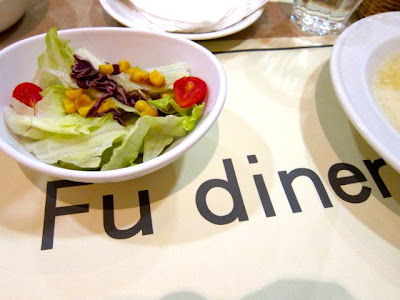 My Japanese "teriyaki" chicken rice omelette with mushroom sauce (NT$220) seems more like a mushroom, chicken stew and to my surprise the rice in the omelette is devoid of any red, ketchup coloring or flavor and there's no teriyaki sauce on the chicken. The egg is silky and runny unlike the omelettes I've seen the food courts and mixes together with the rice and the sauce quite well. 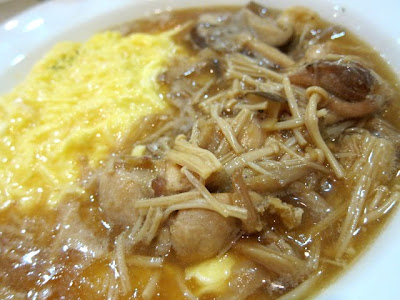 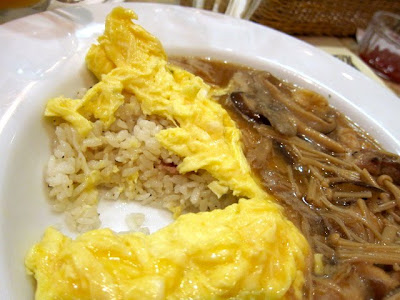 The omu-rices are made to order and come to the table one to two at a time. I notice with a bigger group at the next table, some people are halfway done with their food before the last of their table's food arrives. Fu Diner is out of their chiffon cake, so we opt for vanilla ice cream and tiramisu which has too much cream and not enough sponge cake to my liking. 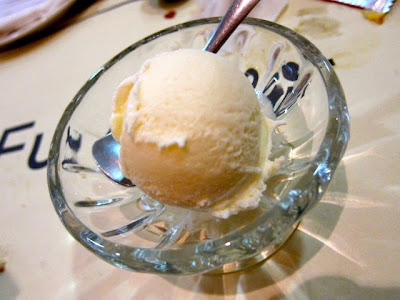 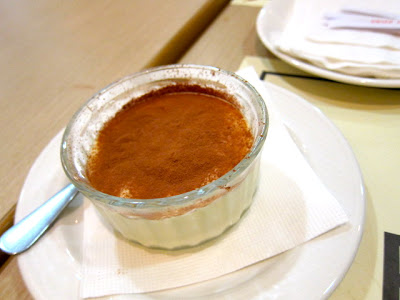 Longtime readers of my blog might remember a restaurant or review about a restaurant called Moga, which served fusion Italian-Japanese fare. Turns out the owners of Moga reinvented themselves and opened up Fu Diner. The good thing is that they also put their waffle fries on the menu, which makes for a tasty side. 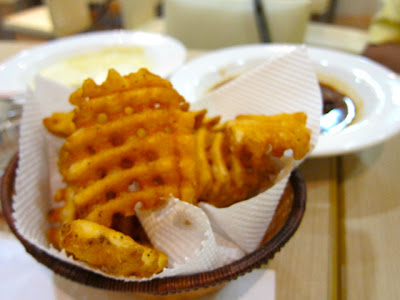 If you're not a fan of omu-rice, they also have a few pastas on their menu. My grandma got this vegetable pasta which I didn't try. 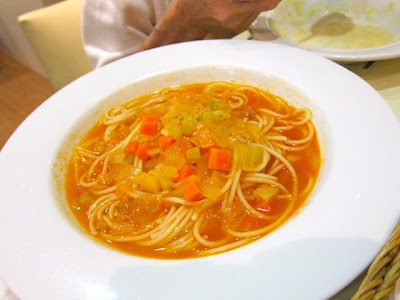 The decor is cheery and bright and fills up with groups and businessmen after noon- when we sat down at 11:30AM on our second visit, the restaurant was empty, but the 30 or so seats were filled to capacity when we left. 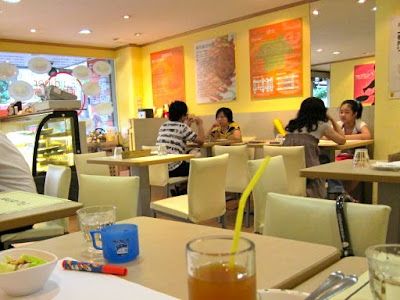 I'm not entirely sure what the name of Fu Diner has to do with the food- in mentioning the restaurant to a friend who said "What is it called?" I said, "Fu, like F-U" which of course resulted in laughter.

Love your blog! I was born in Taiwan but moved to the US when I was ten. I've only been back a couple of times but have always loved the food. I would love to eat my way through Taiwan especially after reading about all these places. Seriously, ketchup and rice? Totally up my alley!

I like to read your post, really interesting. But I wonder if u can put in different grading like rate it up to 10, rather than Strongly Recommend most of them. Just a way of thinking, sorry if I have offend u in anyway.
Pls do keep posting more, so we can enjoy it with u.

that's a very interesting omelet dish! wonder how it taste like?

jchokie: thanks for your comment! the more time you spend here, the more you'll discover!

kior: thanks! no offense taken! i have strong recommend, regular recommend and neutral, so you can consider strong an 9-10, regular 6-8 and neutral 4-5 and a few don't recommends. Otherwise, I think a number system is still subjective and would always be changing.

vietfoodrecipes: it tastes like a runny scrambled egg.. you should try it if you get a chance

I think FU pertains to "FEELING" as has been always remarked by tv stars here (i.e. to do something with FEELINGS in Mandarin that will be " hen you FU") . LOL........
Another word worth sharing is "MAN" as used often an adjective by Tv stars (in Mandarin da hen MAN)- He is so MANLY. LOL........ btw love your blog....keep it up girl

Looks good! Hubby's office is right on minsheng but i've never been to Fu. Looking forward to trying it out!

fertilemyrtle: haha! hope you get a chance to try it out!

Anonymous: thanks for the update. i never got a chance to try out that location.. just was mentioning it to someone today.