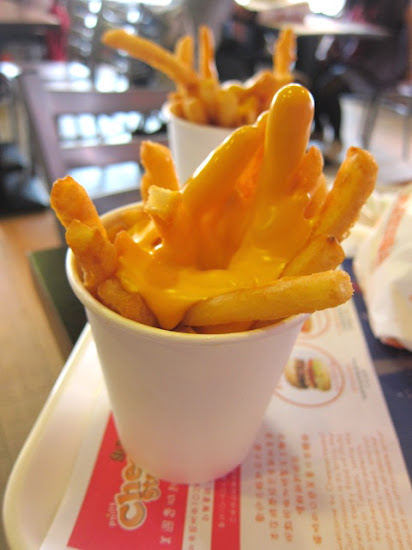 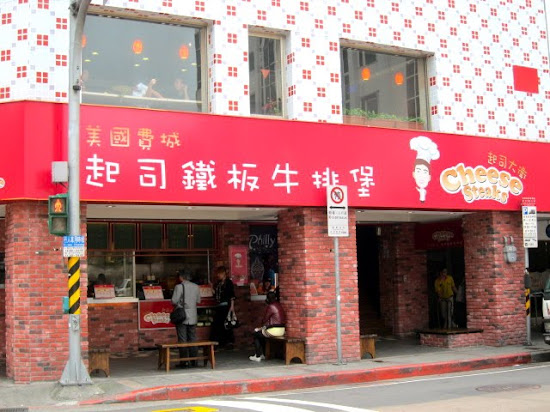 After moving back to Taipei, I found myself craving all sorts of things that I never gave a second thought to in the states. Fajitas. Subway cookies. Meatballs. And philly cheesesteaks.

So when I heard about a philly cheesesteak place opened in Taipei, I knew I had to give it shot, especially after hearing that it was opened by a Taiwanese American who lived in Philly and had moved back to Taiwan.

There's probably a good portion of Taiwanese people who have never been to Philadelphia, so this would be their first exposure to a philly cheesesteak. I've never had a cheesesteak in Philly either, so I can only imagine how awesome they might be. My memories of the smell and sizzle of philly cheesesteaks are from Steak Escape at the Galleria Mall in LA (but I think I usually ended up with Chick-A-Fil or the orange chicken from Panda Express).

Cheese David is located in Ximending, closer to the theaters than to the MRT stop. Once you get onto E Mei St., it's easy to spot with its red and white three stories. 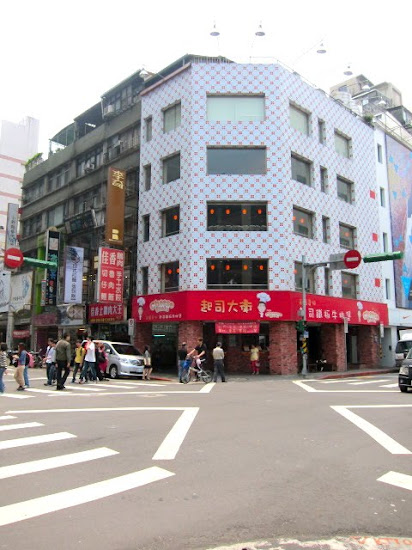 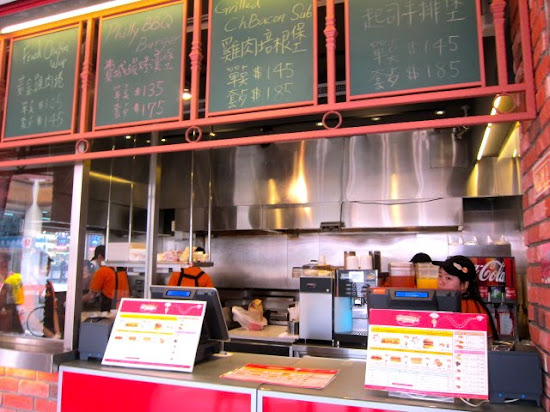 The plastic menus have English and Chinese as well as pictures. Besides cheesesteaks, there are burgers, chicken sub sandwiches and tuna salad sandwiches. I was also surprised to see waffles and desserts on the menu, though the desserts looked slightly Costco-ish. 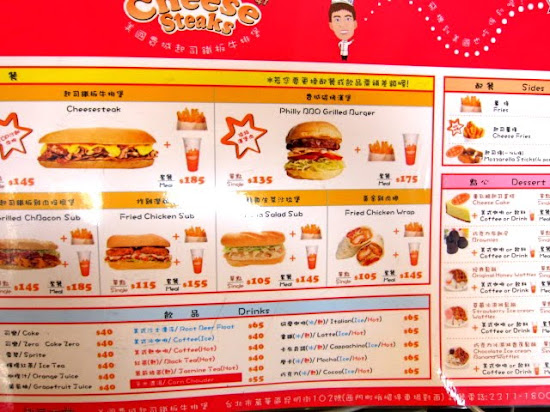 Once we placed our order at the counter, we had to wait for the food to take it upstairs where the seating is. So I wandered over to the window where they were grilling up the beef and spotted the tub of cheese sauce. Scoops of cheese sauce going on fries, going on cheesesteaks. 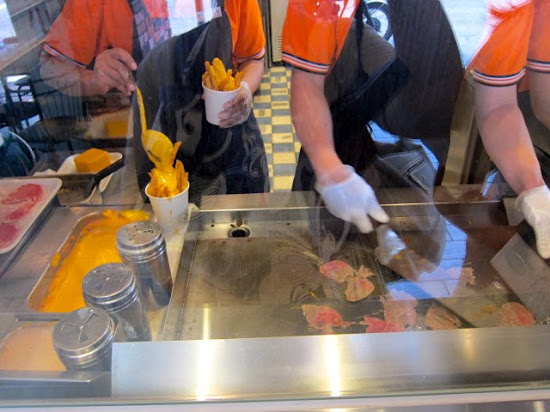 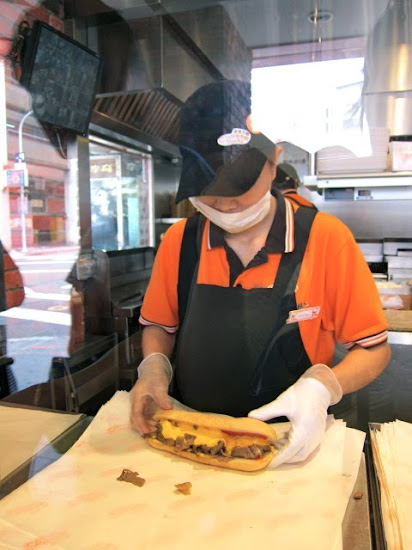 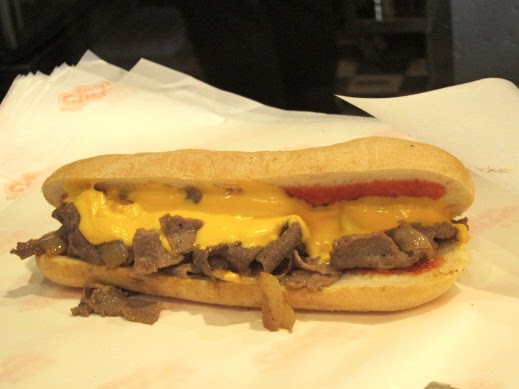 I have to admit that the packaging and concept is pretty well thought out. The bright orange logo is on all the wrappers and cups and the cheesesteak even has a sticker with the cartoon image of Cheese David. 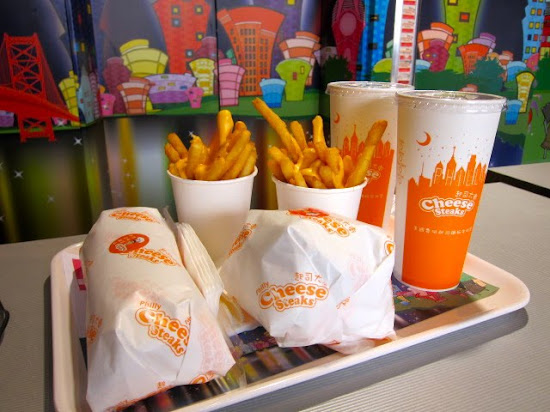 Upstairs, we can't wait to dig in. I asked them to cut the cheesesteak (NT$185 set meal) and burger in half so my friend and I can each try half. 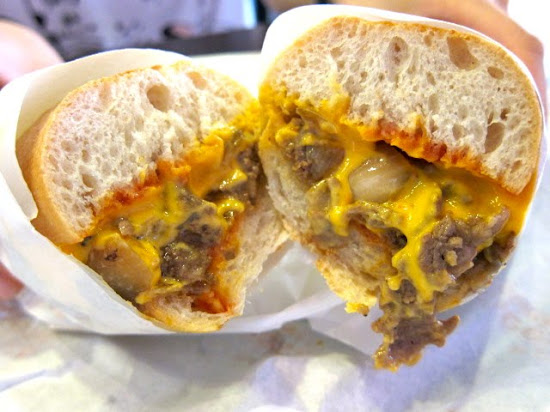 I wished there was more steak after my first few bites. At least twice as much, if not more. Is it too American of me to want a huge pile of meat overflowing out of the bun, or is that a reasonable expectation for a philly cheesesteak? Just google "philly cheesesteak" if you want to see what I mean.
So I can't help but to be a little disappointed, even though the flavors are good, especially if you enjoy gooey cheese whiz-like cheese sauce. 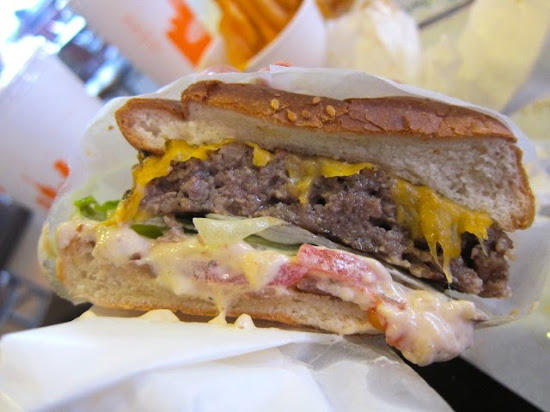 The burger (NT$175 set meal) is decent too, with a better meat to bun ratio, though the bread on the cheesesteak is better than the bun on the burger. It's a good size and I can't really think of other burger places in the Ximending area besides McD's. And I devoured my cup of cheese fries and probably some of my friend's. 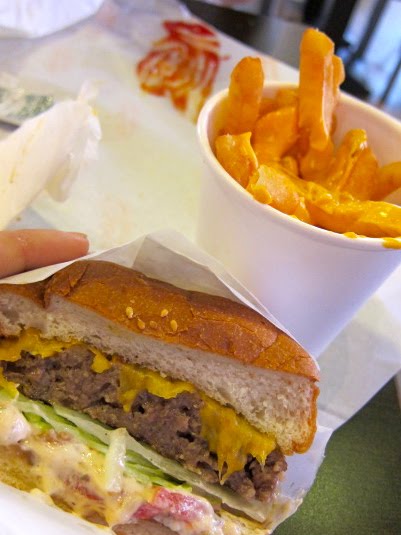 I can imagine how this place is popular with people looking for something different and there seem to be a lot of students hanging out and studying in the seating area. Hard core cheesesteak lovers might want something more, but for some looking for a taste of "home," this might do the trick. 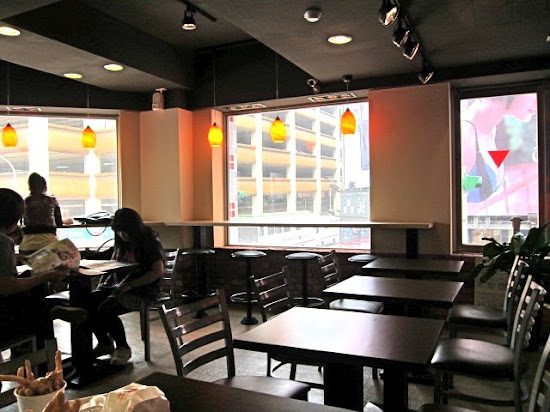 At the end of the meal, most of my friends agreed that we might not come out of our way for a second visit, (especially since I had started experimenting with making my own cheesesteaks at home!) but it is worth trying once to see if you like it or not. I could totally see how if you're really jonesing for cheese fries, and in the area, Cheese David wouldn't be a bad place to hang out for an hour or two.
Posted by joanh3 at 11:34 AM

Being from philly, I can say this is a pretty good rendition of a philly cheesesteak. The bread is the right texture; cheese whiz, fried onions, tasty sliced steak - it's all there. The meat ratio isn't too bad, a little slim but not unusual. Granted, in philly you'll get more choices and options (provolone instead of whiz, w/ or w/o onions, and usually ketchup + peppers on the side), this will satisfy a good deal of philadelphians. It gets better -- Dave's cheesesteaks is also one of two places I know in Taipei that serves root beer. Although Dave's doesn't give you straight up root beer, only as a float. The other place is Tacos 2 GO which also has mountain dew.

by the by: you've got a great blog, keep 'em coming

Can you comment on the quality of the beef? Every cheese steak experience I've had in Taiwan has been marred by beef as tough as leather.

it doesn't look too off! more meat sounds about right though. also, is there ketchup on there or something?? never had one with that...

It's sad that they only offer Cheez Whiz cuz i'd like more cheese options at cheese david. Saw someone at NTU eating this in class and wanted to try it out. It seems like they went for top round cuts, but I like rib eye slices better. You could prolly whip up a better one in ur kitchen.

amy: thanks for reading and commenting! cool to have a philly opinion! i think i've seen root beers at more places- i'll have to pay more attention next time.

brent: it was not tough but not gourmet

johnny: it would definitely be nice to have more cheese/pepper options, and yes, i think we can make better cheesesteaks at home.

I had a few cheesesteaks while I visited Philly and while it's good to have an option like this in TW, I think they need to give the customers more options. I like the provolone option, but whiz was quite delicious. Also, hot peppers gives a cheesesteak a much needed boost.

My husband & I stopped by to check it out last night. He ordered the philly cheesesteak, and I ordered the tuna salad sandwich (trying to be healthy), but in the end he definitely had the better order! I suppose, being from Texas & Oklahoma, our philly cheesesteak standards may be a little more lax.... but, I think for anyone missing a gooey cheese & meat sandwich on some great bread - this place hits the spot. Not to mention it's nice to eat reasonably priced 'western' food that is not always a burger... Thanks for the recommendation!

I tried it. I like it except for when I forgot to hold the ketchup and other veggies. They said he uses top sirloin but you'll have to try it to gauge your feel

This was the worst cheesesteak I have every put my mouth around. FAIL! FAIL! FAIL! (Cheese David is correct.......the sandwich is mostly cheese)

I would go back to cooking Local TW Food or study more carefully on you next trip to the East Coast, USA. While eating my overpriced cheese sad-wich, I couldn't help wondering if the owner has ever eaten a real philly cheesesteak?

The only positive thing we really found was the "Root beer" and window watching the students workers remove the skin top of the cheese.

I won't go back or recommend this place to my friends.

I wish I had 4 hands, so I could give this place "4 Thumbs Down". Major Fail!

Just went there recently and the place is no longer called Cheese David. It's now "Love Park". The decor looks more upscale (based on your photos). The philly cheesecake's still on the menu, but at a much higher price.

I wouldn't go back there again.

This place is closed now. It is now a hair follicle center. No joke!