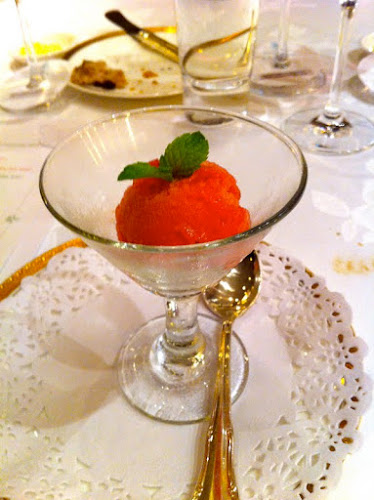 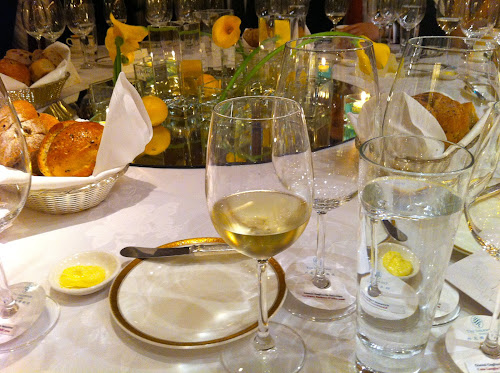 When I first started this blog almost six (!) years ago, I had never heard of or knew about Michelin stars, palate cleansers or foie gras, much less experienced that kind of fine "wining and dining." Even Top Chef wasn't on the air back then to teach us about amuse-bouches and sous vide!

But after many seasons of Top Chef and the Food Network and blogging, I've picked up enough to not feel out of place at those fancy restaurants. And after eating my way around Taipei (and a few other countries here and there), I still believe that a meal that costs $1 can taste as good as something that costs $100. Good food is good food, no matter what. (After all, a high price tag doesn't guarantee good food!) 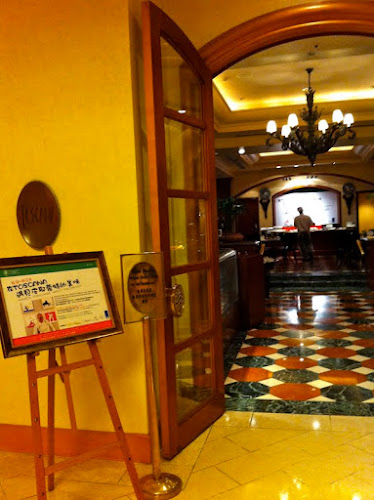 If you can afford to splurge, then you should make your reservations at Toscana while Chef Nicola Batavia is a guest chef there, from June 8- June 24th. I was lucky enough to be invited to the Taipei Sherwood Hotel where I enjoyed an amazing meal and got to peek in the busy kitchen. His dishes are available as sets or ala carte, for lunch or dinner. 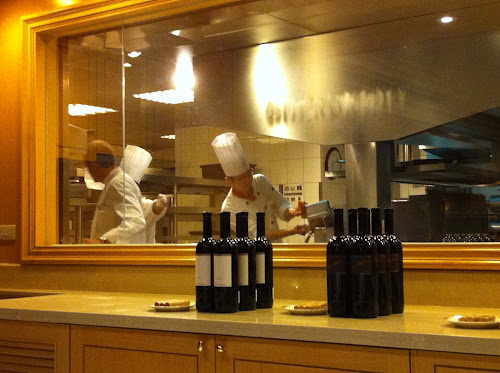 I didn't know until after the meal that Chef Batavia has two restaurants in Italy, Ristorante Birichin, which was awarded a Michelin star, and La Kava, and recently opened a third in London, Casa Batavia. I've never been to Italy, but after this meal, I know I have to make the trip one day! 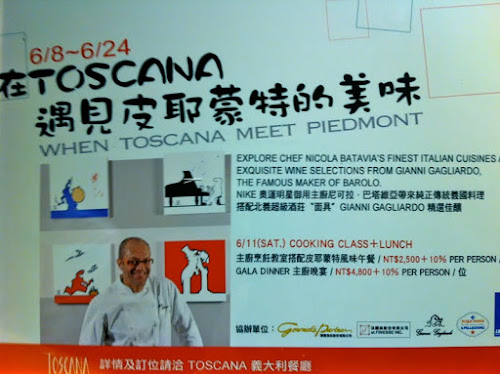 The first amuse bouche was a cold tomato and vegetable soup. The second amuse bouche was sweet shrimp presented four ways, including with frozen fresh mint on top. Two were kind of citrusy, but only the one with the mint was cold- all were super fresh and had that melt in your mouth sea bite that I love about sweet shrimp. 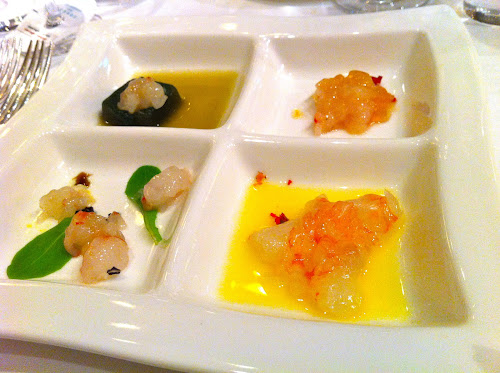 So many parts of the meal were so memorable, but hands down, this was my favorite dish of the night- split pea soup with brown sugar flavored foie gras. 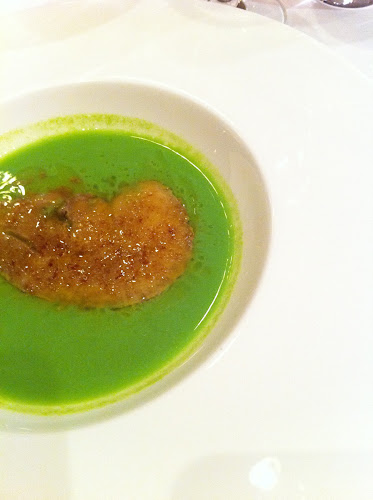 The startling bright green soup had a sweetness and almost milky texture, not grainy at all from my previous experiences with split pea soups. The sweetness was accented by the carmelized brown sugar on top of the creamy foie gras which was cut into a super thin layer that might be mistaken for a crouton. It was the perfect amount, which means I savored each bite and after I was finished I was left wanting more. 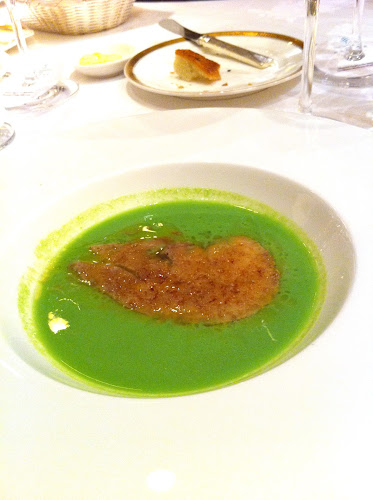 I loved the taste of the freshly made pasta in the Paccheri filled with prawns and pecorino cheese sauce dish. It was cooked perfectly and the sweetness of the prawns here echoed the earlier sweet shrimp. It wasn't drowned in sauce or cheese, rather they were accents to highlight the flavors of the pasta. 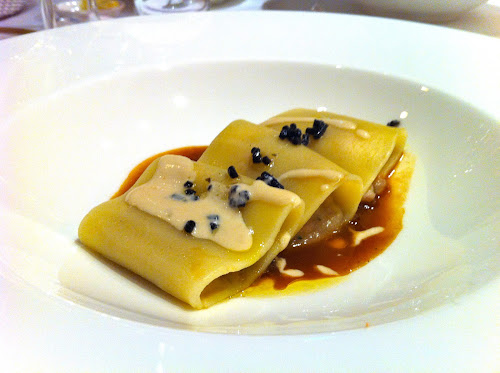 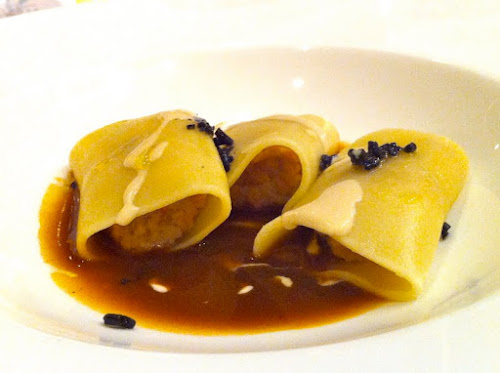 Everyone oohed when the monkfish, parma ham and potatoes served with red piedmont sauce and pistachio and crispy onions with the vertical plating. I thought the onion rings were a little out of place tasteon the dish, but I ate them on the side. It was also my first time having monkfish, which surprisingly had a shellfish springiness and taste to it. It didn't flake like fish, rather it was firm and sweet like lobster. 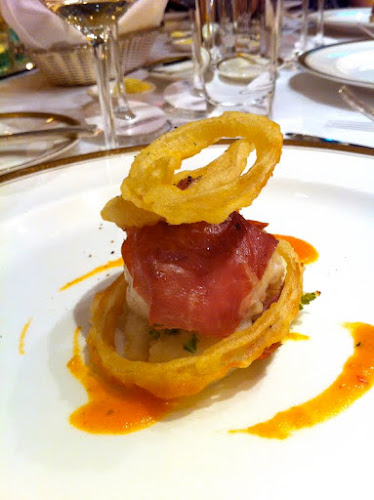 One diner at our table asked why we were getting dessert in the middle of our meal when the tomato strawberry sorbets arrived, and our friend explained about the palate cleanser, which is supposed to refresh and stimulate your tastebuds for the next dish. The tomato flavor was stronger than the strawberry, so the ice was almost savory. 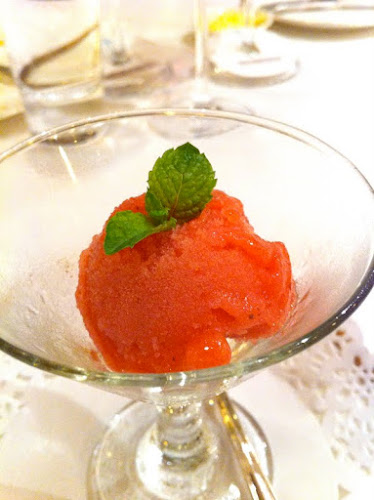 I would have never expected for tuna to be used in a sauce for veal, but in the veal with tonnato is a variation of one of Chef Batavia's signature dishes, vitello tonnato. The tuna flavor was very subtle and I almost thought the sauce was a bland mustard, until I tasted the tonnato by itself. The veal was very tender, but being used to heavier seasonings, my only complaint about the entire meal was that the meat could have used a touch of salt. 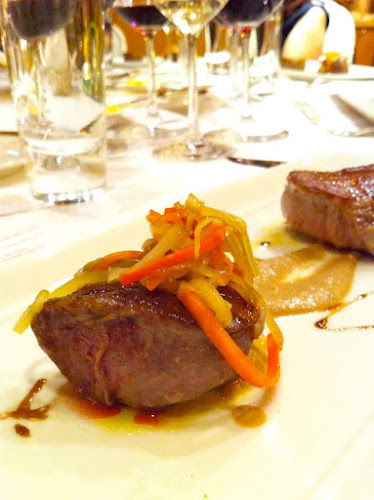 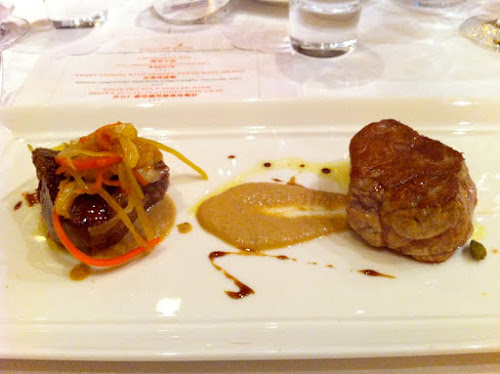 One of my friends that night had a vegetarian set so it was cool to see how his dishes contrasted to mine. He had an asparagus, poached egg appetizer I had my eye on, and the plating of his "pasta" dish was gorgeous, with super thin slices of eggplant and sweet potato. 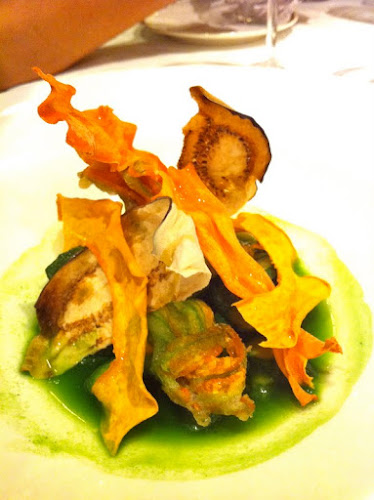 He said that these deep fried flowers tasted like crab, as they were stuffed with some sort of creamy cheese and the long petals almost like the legs of a deep fried soft shell crab. Haha! 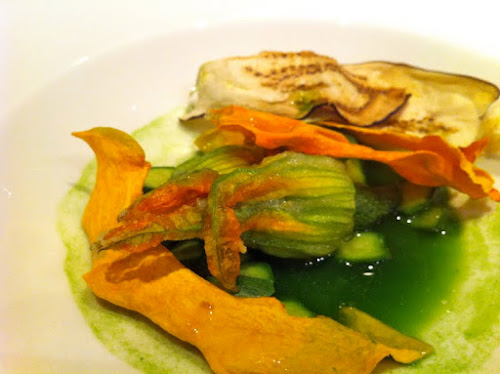 I was also impressed with the creativity of the pearl barley dish. Most of the time, vegetarian options are  a creamy pasta tossed up with mushrooms or sliced bell peppers, or veggie pizza, but all the elaborate dishes in the set course were unlike any other vegetarian dishes I'd seen before. It's too bad my mom wasn't in Taipei, as I would have treated her to it to see what she thought, as she's been vegetarian for over 20 years. 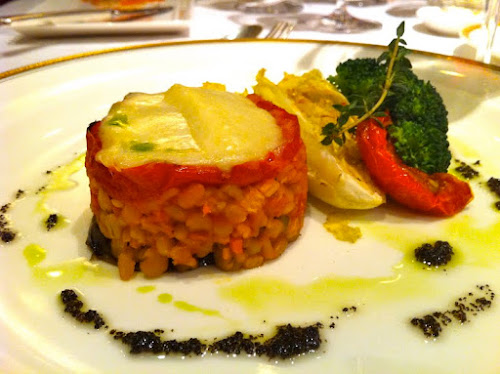 Lots of wine on the table, as Gianni Gagliardo red and white wines were paired with the various dishes. 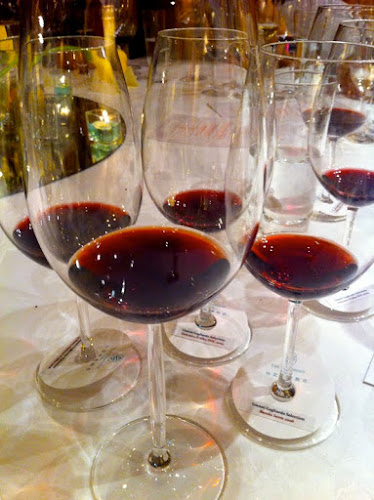 I loved the delicate pistachio and white chocolate ladyfingers that came with the Italian Sabayon, as well as the chocolate dipping sauce. While the sabayon had too much alcohol for me to have more than a few tastes, I secretly spooned all the chocolate into my mouth when no one was looking. 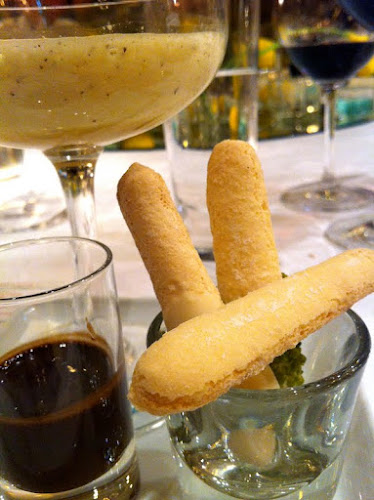 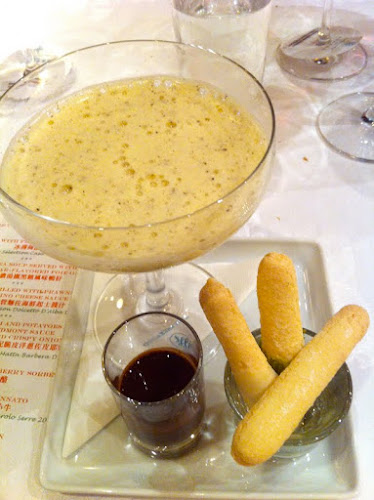 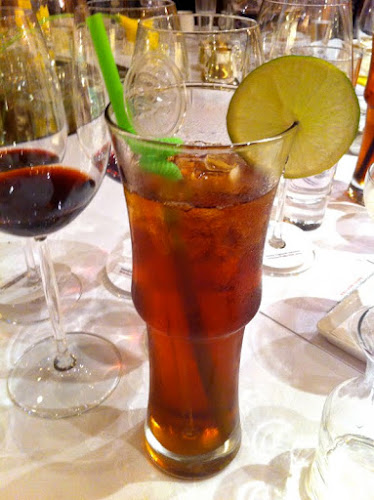 The meal was a taste of Italy transported to Taipei and Chef Batavia's light touch on all the dishes showcased the quality ingredients and made for a memorable meal. I don't always get to hear about these special events, but I'm glad I caught this one. Toscana also offers a luxe weekend brunch and a big salad/antipasti/dessert spread for lunch, dinner and afternoon tea. Maybe I'll have to return before it's over for a bowl of soup.
Posted by joanh at 12:20 PM

wow, that looks mouth watering good. Is there still a chance to make reservations before the 24th? Anywhere I could compare lunch with the dinner menu?

anonymous: i'm sure if you give Toscana a call, they can give you details about the lunch menu vs the dinner menu, as well as tell you availabilities about reservations. please let me know how it was if you give it a try!