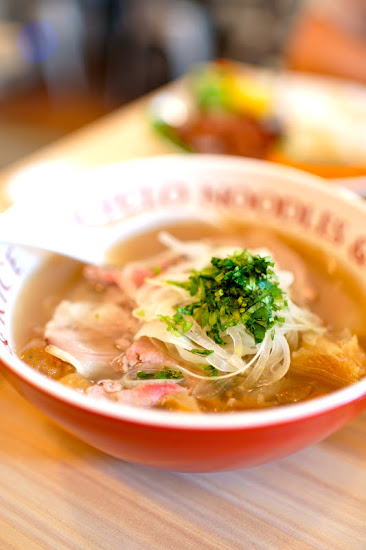 Kid friendliness: no high chairs spotted. semi-tight seating except for one table in the front 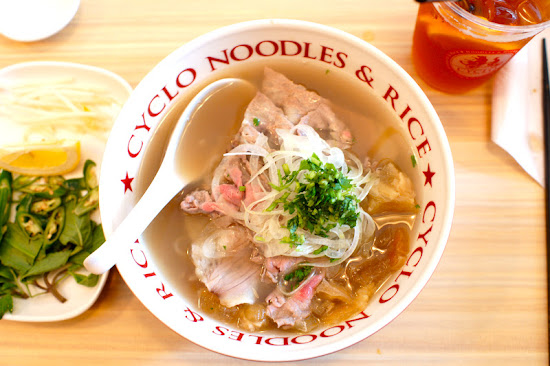 Cyclo is a newly opened LA style Vietnamese pho and rice restaurant, seating about 25 people in a bright, new space with a row of tables leading up to a semi-open kitchen. Bubbles of thoughts appear on one decorated wall like a stream of consciousness mission statement- "Pho!!! Fresh, casual, healthy... Create your own! Fast, delicious!" 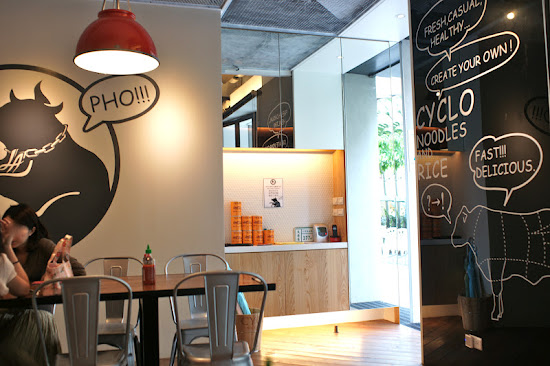 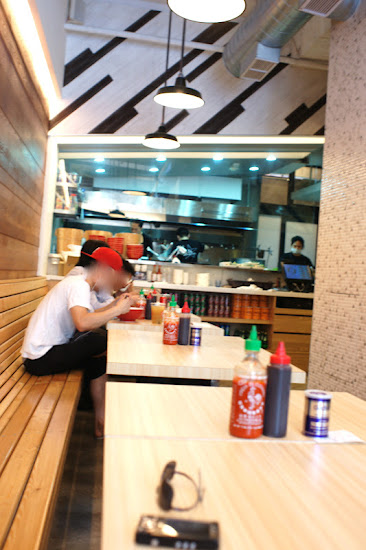 Bottles of Sriracha and hoisin sauce sit on each table, waiting to be squirted into diners' bowls. Seats fill up fast, so show up a little early if you want to make sure you get a table. 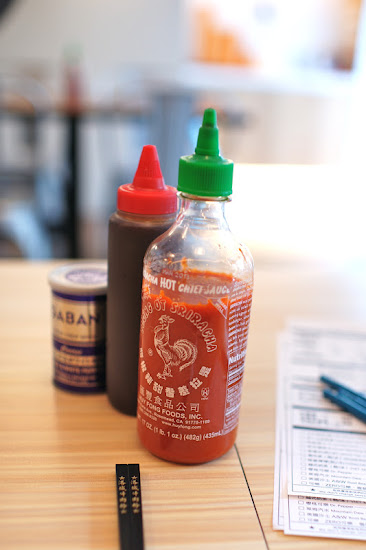 If you don't get handed a menu, grab one from the pile next to the door and a pen. It's one menu per person and mark your initials in the top box so you know who's order is whose. Cyclo's menu reminds me a bit of the Counter, but instead of building your burger, you're building your bowl of pho. I love that there's English and that there's even a sense of humor- "For People who Don't Eat Beef" and "For People who Don't Eat Noodle." You can choose your type of noodle, 3 items for NT$190 or 4 items for NT$230, yes or no for richness in the broth and your choice of herbs. Appetizers and rice plates are listed at the bottom in Chinese only, but our server that first day helped us out with swift and patient English translations. 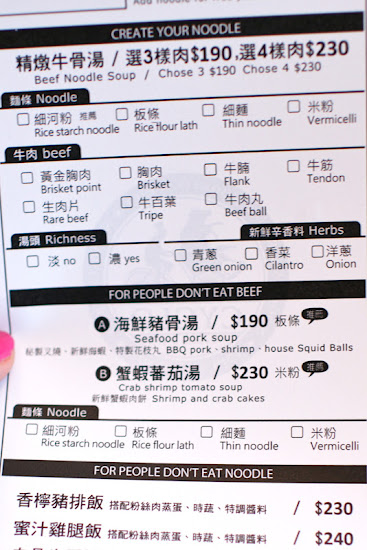 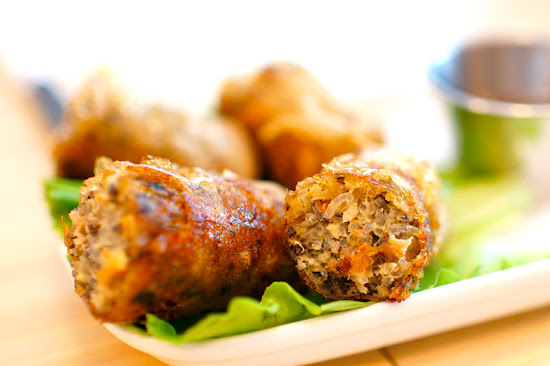 Vietnamese spring rolls with spam. (NT$55) Yup, spotted cans of spam in the back on the shelf. Spring rolls are also available with fried shrimp. I preferred the fried ones, over the summer rolls at this shop. 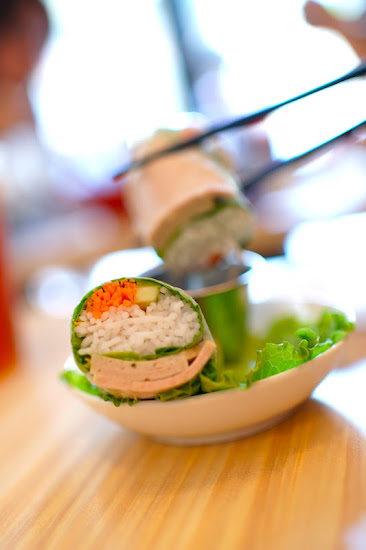 Lemon ice tea (NT$70) was nice and refreshing, with sugar to adjust your own sweetness. My friend said it was like lemon ice teas she's had in Hong Kong. It is also the only drink to come with free refills, so a better deal than the honey lemon and the lemon sugar cane drinks. 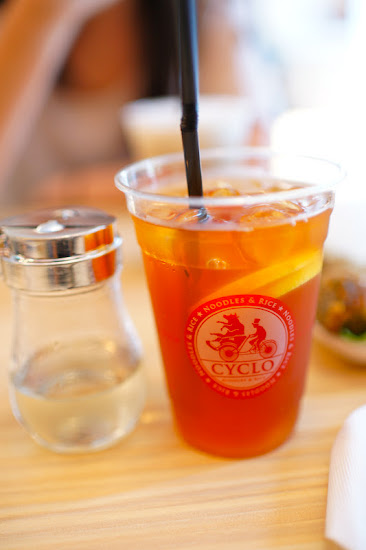 One of my lunch dates ordered one of the rice plates, I think this was pork (NT$230). Or was it chicken? Haha, I didn't try it, but it looked delish and filling. 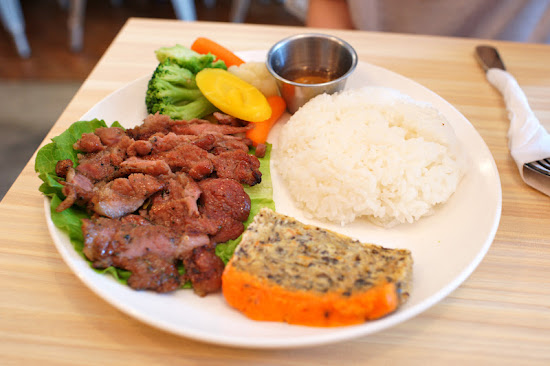 Not too long after we ordered, our bowls of pho came out. If you write your name on your menu, then it would be easier for them to ask which bowl goes where. The waiter waved the menu at me and I didn't know what she wanted until I realized she wanted to know who had ordered on the menu she was holding. 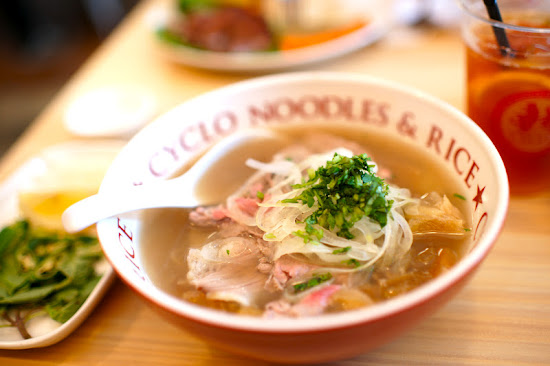 My rare beef, brisket point and tendon pho with rice starch noodle (NT$190) was pretty awesome. The brisket point was so tender and I kept savoring it as I chewed. The rare beef was pink and cooked a little more as I swirled it in the golden broth. The slippery noodles were the perfect texture. And like in LA, you get a small plate of basil, sliced jalapenos, bean sprouts and here a slice of lemon to add to your pho. I tried the "rich" version of the broth on my second visit, but while it wasn't salty while I was drinking it up, I was a bit thirsty later that day. 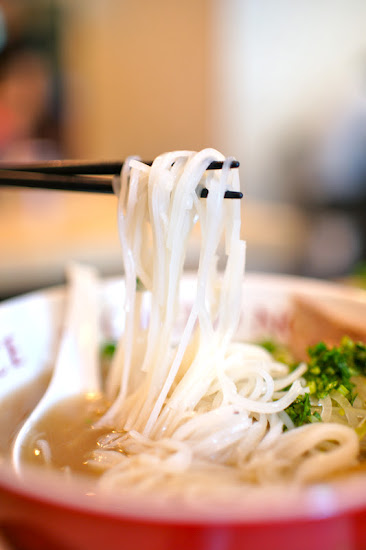 Cyclo will be sure to have strong word of mouth. The day my friends told me about it, they had gone for both lunch and dinner. The last time I went, I ran into three separate groups of friends, without knowing that they were going to eat there too, which was pretty funny. I even wasn't sure if I wanted to blog about it yet, but I figure it can't be more crowded than it already is. Some of the days I went, the waitress was even turning away people from empty seats because the kitchen was slammed with an entire restaurant's orders at once. Personally, I would have let the poor hungry people just sit, mull over the menu and wait for their food... after all, some people in Taipei wait in insane lines for a bowl of noodles (at the newly opened Ippudo and Santouka), so why not for pho. 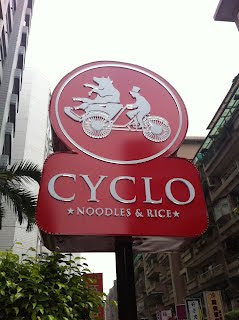 I go there every week!! Good pho, but the crowd's a bit overwhelming!!

What is that orange spotted rectangular piece of food on your lunch date's rice plate (the photo after the lemon ice tea)?

Sunny- thanks for commenting! yeah the crowd was so crazy on my second visit.. Hard to go with large groups

This is one of the worst restaurants I've ever been to. Totally commercialized, the pho accoutrements were so scant it was ludicrous, and it's expensive for Taipei. One spring roll is 75nt. If you get drinks, you'd be hard pressed to get out of here for less than 1,000nt. Totally depressing fake LA steez, there's no bahn mi on the menu, and while the pho broth was tasty, the meat was worthless. If you want more than three bean sprouts, two thin slices of jalapeno and like four tiny basil leaves to flavor your pho, that will be 40nt. I can get better pho in St. Louis Missouri.

I have to agree with the people above, Cyclo is overrated

Their location changed. I just went today and ordered their social bowl for 290 (relatively more expensive than Montreal.)

That being said, broth was similar to the ones I had in Cali. The one thing that struck me was the surprisingly flavorful beef balls. I normally don't care much for them but this place had some really good ones.

Veggie condiments such as basil were pretty dry and given in lower than usual quantity.

Overall satisfied except for the steep pricing but I guess the quality of the May makes up for part of the cost.

Thanks for the review!