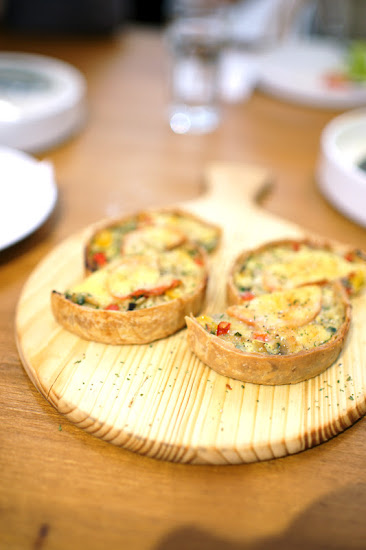 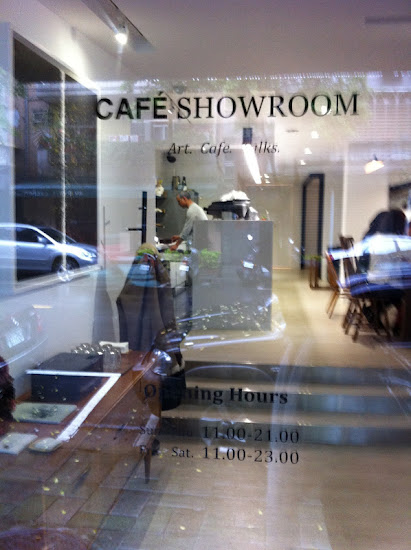 Those of you that follow me on Facebook know that sometimes I post photos of things I'm eating in "real time" or before I have time to organize the pics and write up the post. One photo that caught the eye of many readers was of the quiche from Cafe Showroom, an interesting cafe & art gallery space in the Song Shan district near the airport. The whole street was lined with interesting shops and cafes to revisit someday, and Cafe Showroom was the perfect place to start. My friend said it reminded her of Brooklyn somehow, or maybe the Larchmont Village for those of you in LA, a neighborhood to walk around and shop. 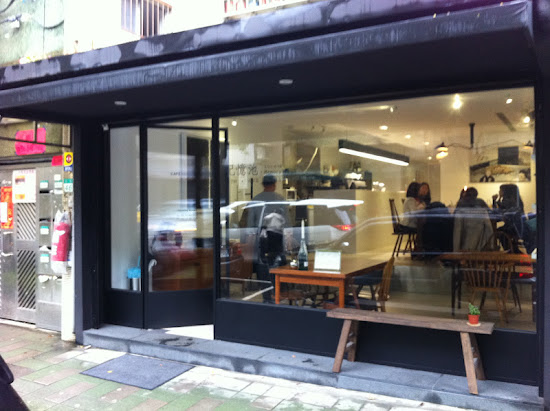 The front has about 3-4 seating areas for groups with spartan white walls and a few pieces of curated art dotting the walls. 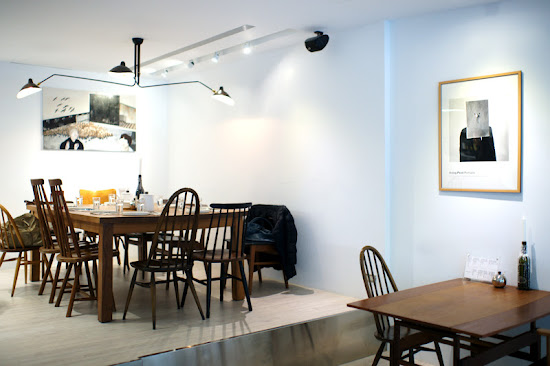 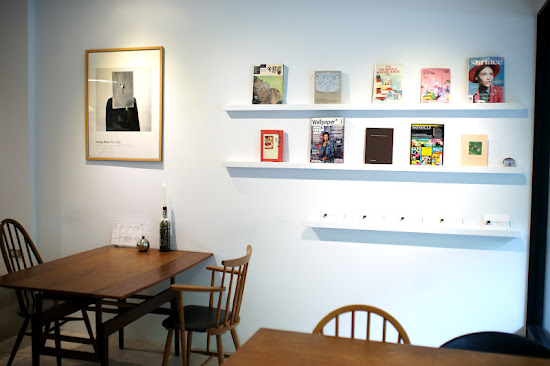 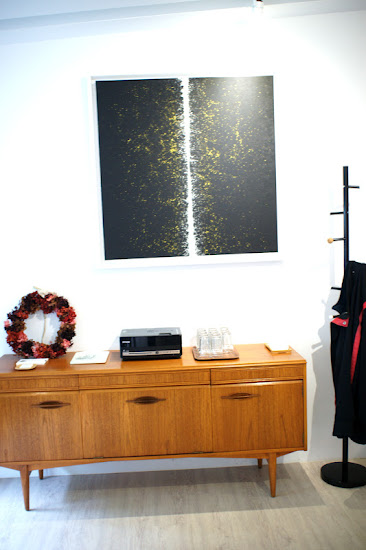 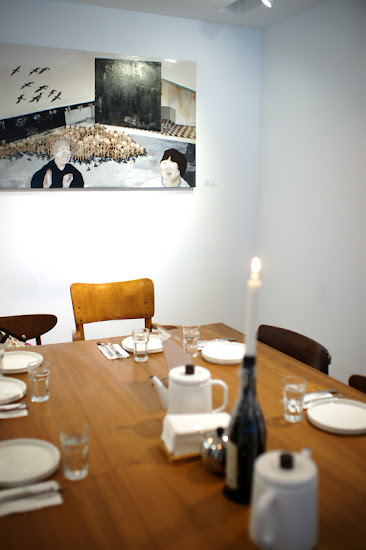 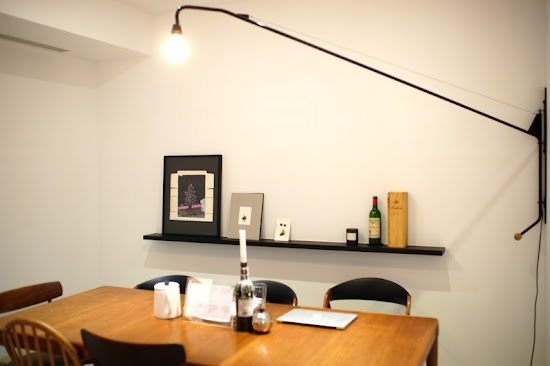 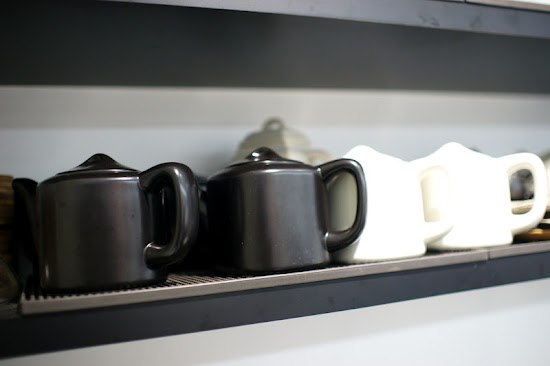 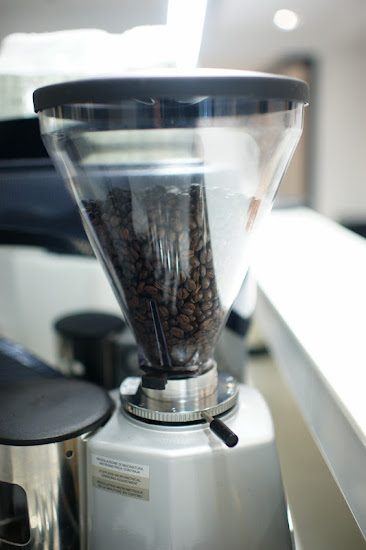 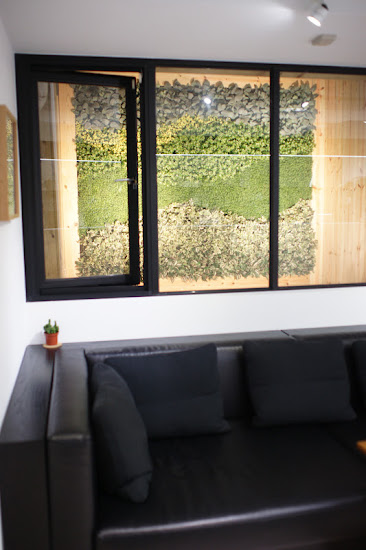 Tucked in the back is the art gallery space, or the Showroom, where there are new exhibits every few months. 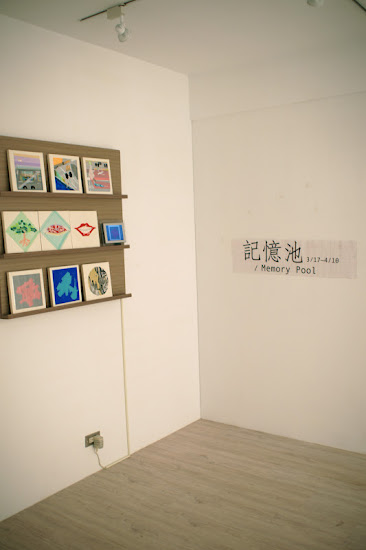 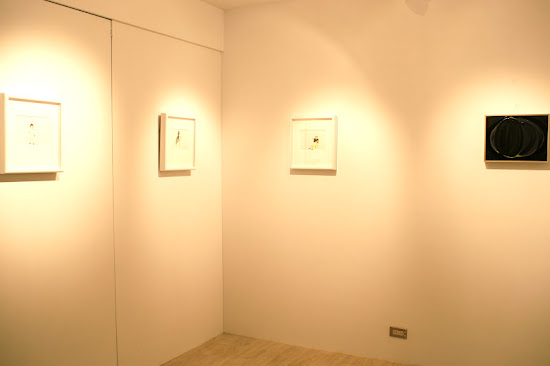 After glancing at the restrained menu, I realized everything was vegetarian, which sounds limiting, but once the food arrived, the simple yet fresh fare fit the atmosphere quite well. There's only four main dishes available, but on weekends, brunch sets are offered. The cafe's coffee offerings include Chai Tea Lattes and various teas like sweet ginger peach tea and high mountain Oolong tea. 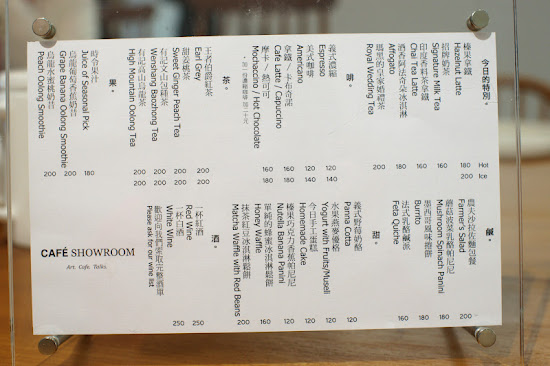 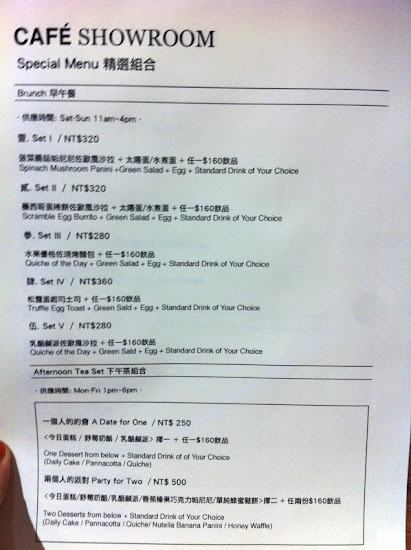 Farmer's salad (NT$200) was quite bright, and the only salad on the menu. 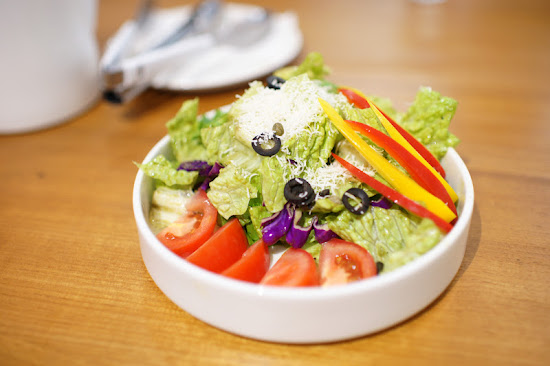 The crowd pleaser was the feta quiche (NT$160) which had soft broccoli, tomato, peppers and olives in it as well. The thin flaky crust was a nice contrast to the creamy egg. We ordered to share that day, but usually each order comes with a small side salad. 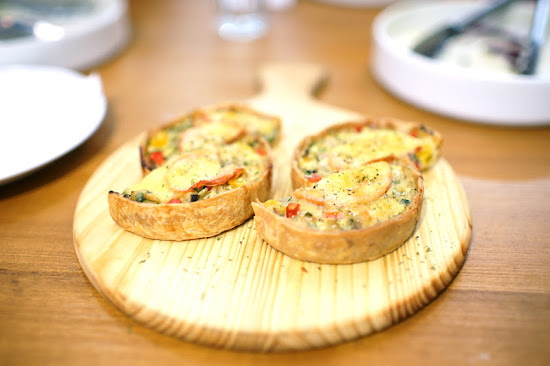 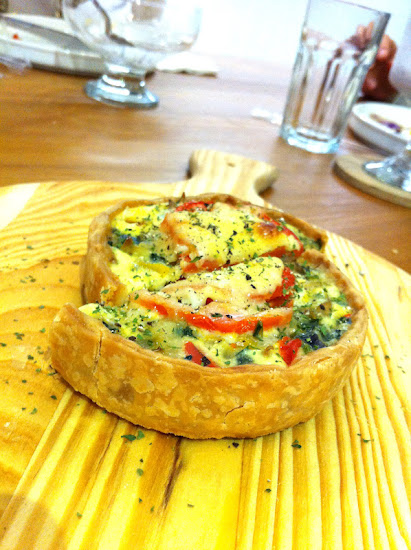 I was also pleasantly surprised by the mushroom spinach panini (NT$180) since it didn't sound that exciting, but the bread was so good and the touch of balsamic vinegar gave the sandwich an extra boost of flavor. 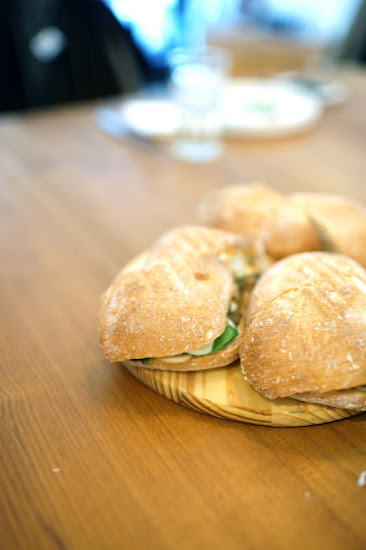 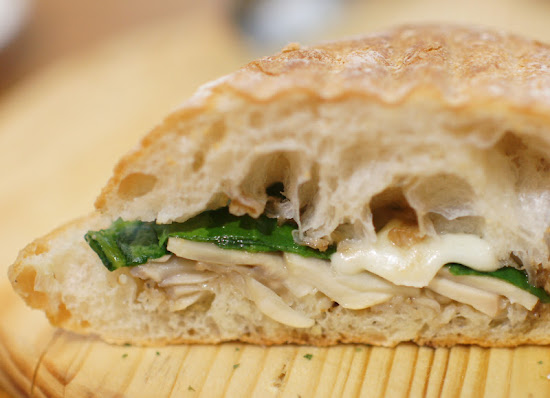 The burrito (NT$180) on the other had fell a little flat- it was more like a veggie wrap or pressed soft taco and not as fulfilling as the panini and quiche. 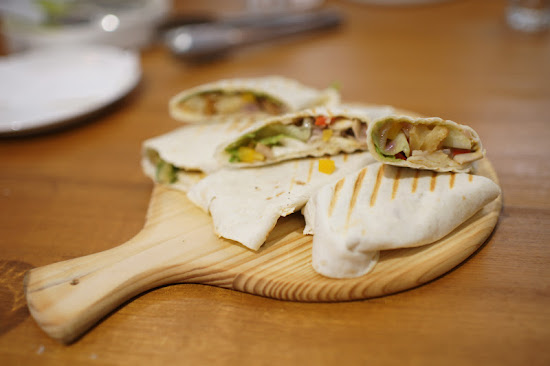 The yogurt with fruits (NT$120) was served with the sweetest fresh peaches and blueberries and served in a cute glass jar. 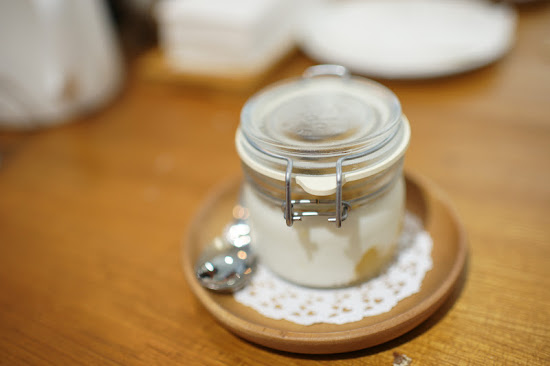 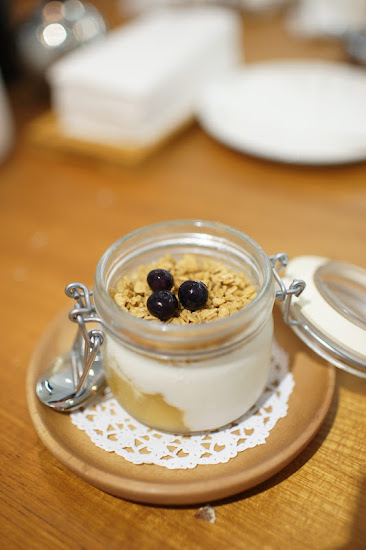 We split the desserts, so I didn't get a shot of the originals, but cheesecake and waffles are also available. 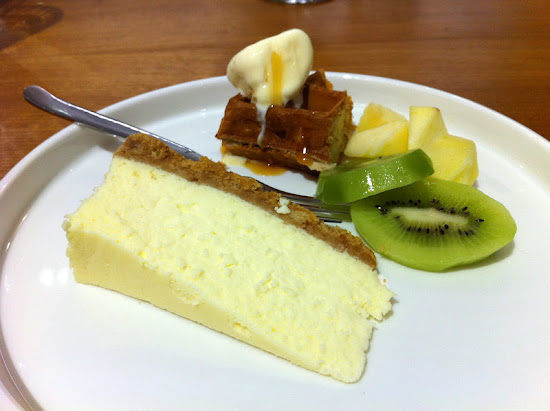 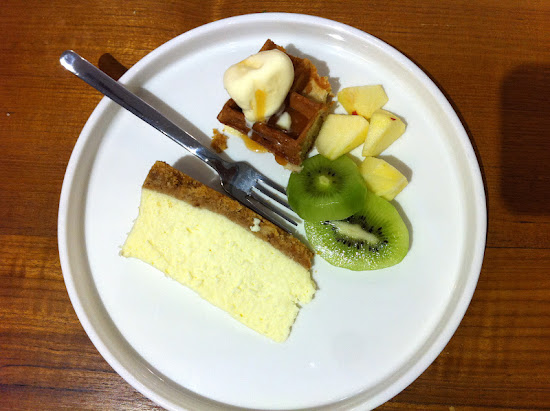 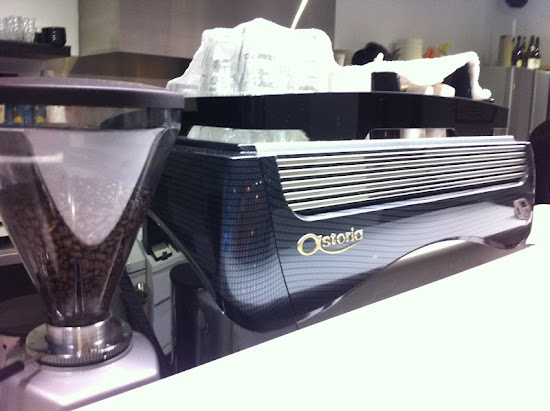 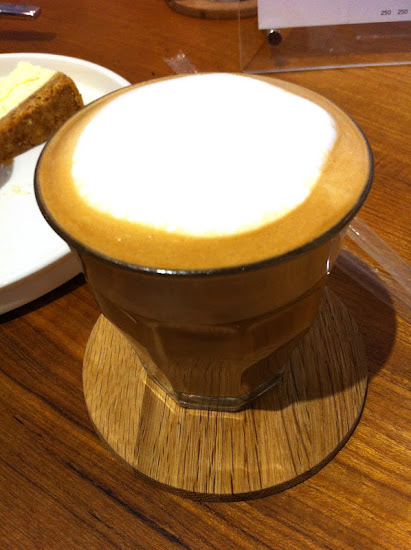 But save room for the nutella banana panini (NT$120) which you could totally make at home with a jar of nutella smothered atop some good french bread, but if you don't want to keep a jar around, this is the place to try it. 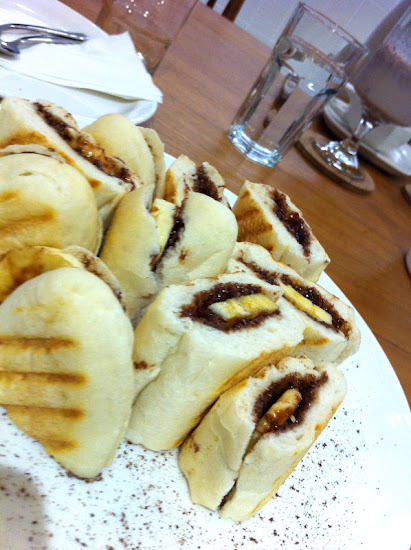 So another neat little space in Taipei, probably the perfect place to bring a notebook on a rainy day, drink some coffee and detox from last night's mala with a light lunch.
Posted by joanh at 12:00 PM

Just by the picture the quiche indeed looks delicious and well executed, with a thin crust and a good ratio of filling.

Btw, are you just using your iPhone for your blog pictures or a dlsr?