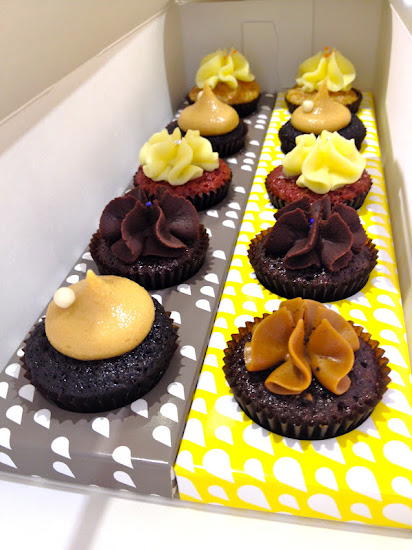 MRT: DaAn (Les Bebes is near Yong Kang St, so about 20 minute walk from nearest MRT)

Kid friendliness: cupcakes come in both mini and regular and lots of sweet flavors kids will love 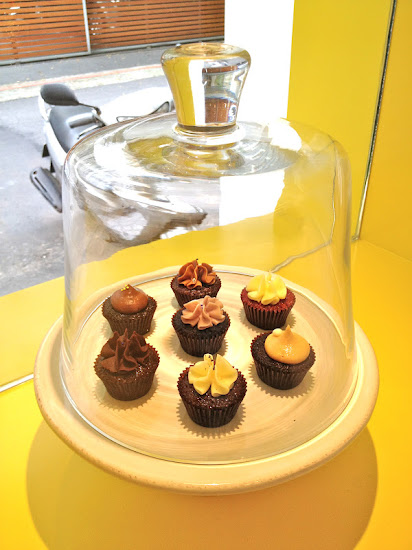 Before I even stepped foot into Les Bebes Cupcakery's shop, I loved their cupcakes. I had received a box of six as a gift and even though not all the frosting survived intact, it didn't change that the cupcakes were moist, sweet and fluffy, unlike many of the pretty, but dense and not sweet enough cupcakes I've tasted in Taipei.

Opened a little over a month ago, Les Bebes Cupcakery is adorable inside out- from its cupcakes to its presentation to its store. Even the storefront looked like the entrance to a giant dollhouse on an unassuming, old school alley near Yong Kang St. The owner also founded the cooking studio Mise En Place, and when they kept getting custom order after order for their cupcakes, she decided that they might as well open a cupcake shop for everyone to be able to buy them. 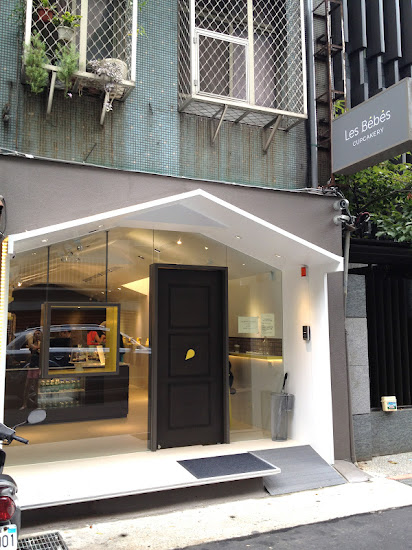 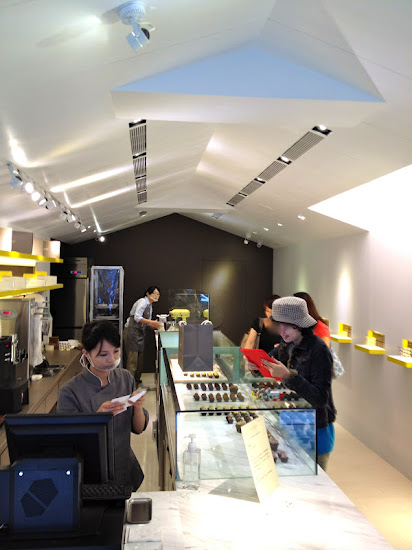 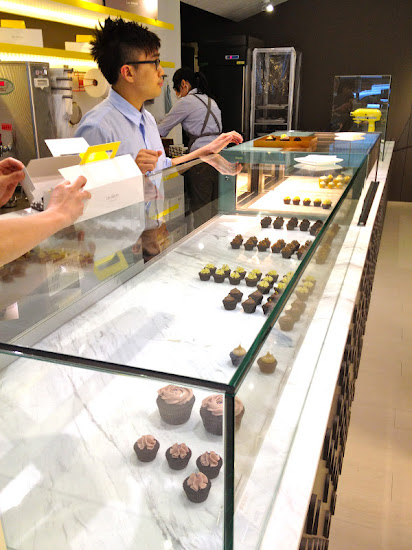 Once you step in the narrow store, you are drawn to the countertop where rows and rows of cupcakes sit under the glass, wearing little hats and crowns of frosting, waiting to be chosen. 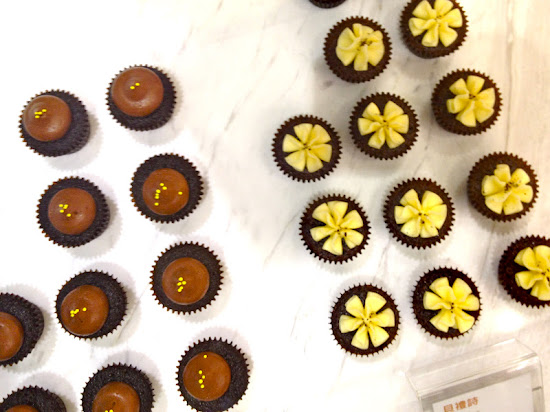 Both regular (NT$80) and mini cupcake (NT$30) sizes are available in about 10 or so flavors, with favorites like chocolate, red velvet, carrot cake (called Bunny Eats), strawberry shortcake and more unique ones like Bailey's or Earl Grey. I love how the frosting on the cupcakes is simple yet elegant and different for the various cupcakes with the tiniest of sprinkles as a finishing touch. 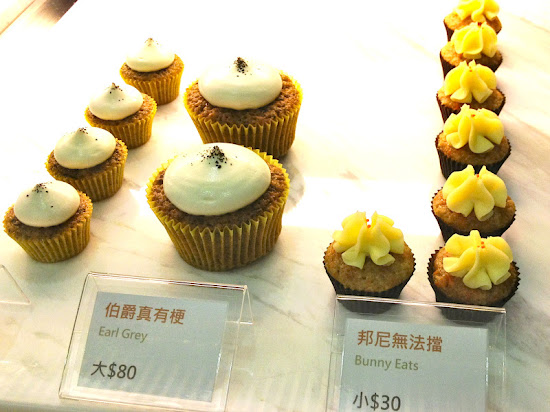 Carrot cake is foreign to a lot of Taiwanese people, as is red velvet, so there's a small learning curve for locals. "Why is the cupcake red?" "Is the carrot cake sweet?" I could hear the other customers asking the shop. 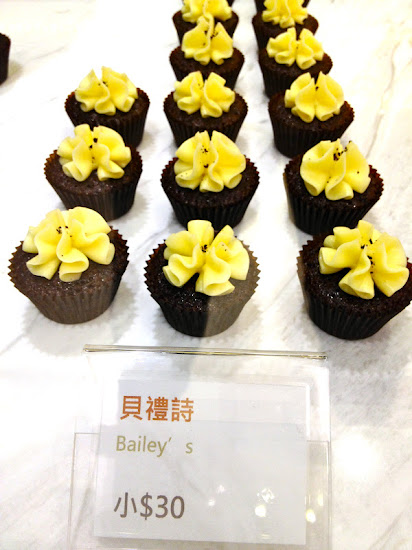 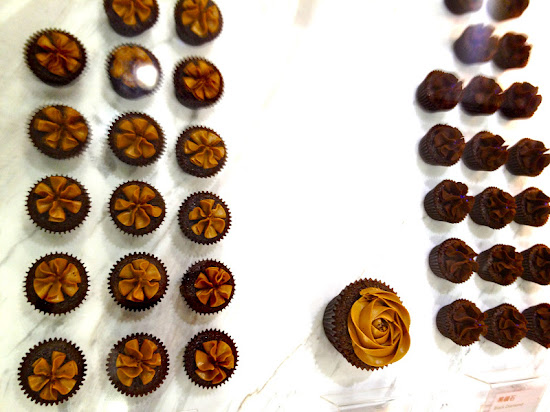 My favorite cupcake and must order is the peanut butter chocolate which comes with creamy peanut butter frosting atop a chocolate cupcake, perfect for those who love Reese Peanut Butter Cups or spooning peanut butter straight out of the jar. (I gotta figure out the recipe!!) Close seconds are the red velvet and the carrot cake. 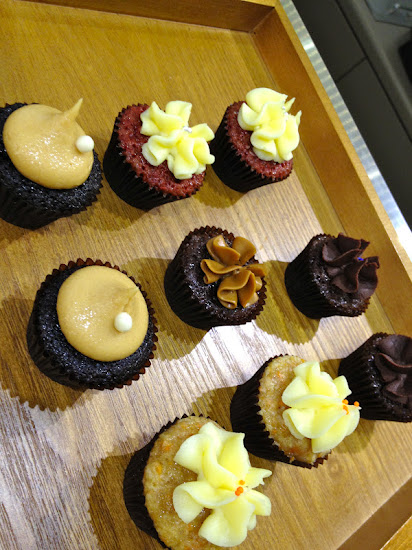 Their Kitchen Aid mixer even fits in Les Bebes' color scheme in the shop and packaging, where bright yellows pop out from the white and grey. I totally covet this! 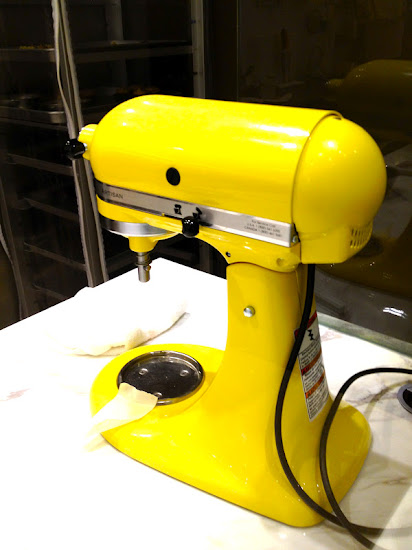 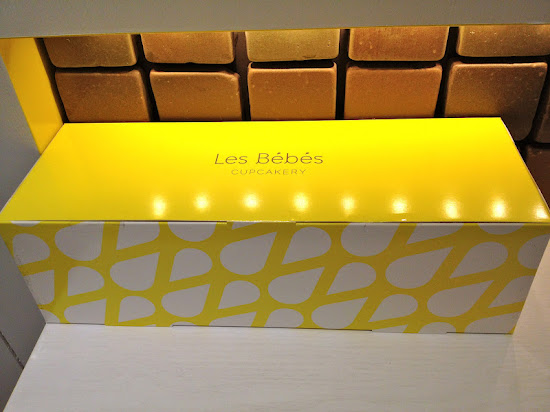 Once you decide what flavors of cupcakes you want and how many, they take them out and put them on a wooden tray to pack up. Mini cupcakes boxes come in 1, 3, 5 or 10, while regular cupcake boxes come in 1, 3 or 6. I asked for a sample when I saw others getting a mini cupcake as a tasting sample and for a limited time, if you post a photo on your Facebook or check in, they will give you a free large cupcake or 3 minis free (the signs were in Chinese so I didn't know until I asked).

I ended up getting 10 mini cupcakes- the red velvet and carrot cake came with sweet cream cheese frosting, the coffee cupcake had what tasted like ground espresso beans in it and the chocolate cupcake was rich on the darker chocolate side. That way you can find out which one is your favorite. The cupcakes and frosting are the closest I've found in Taipei to taste like the ones that I make myself. 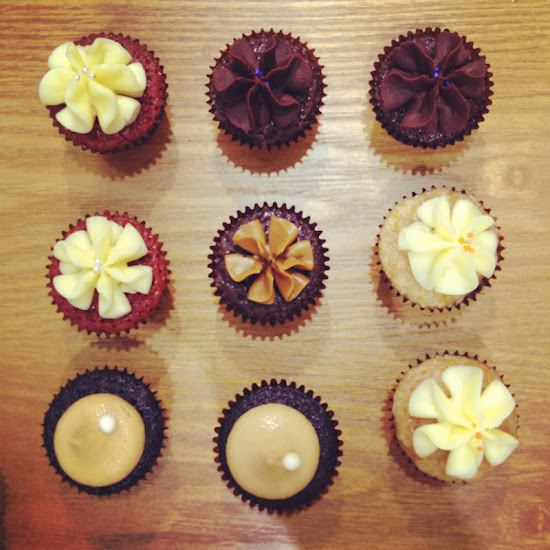 I love the bright, mod patterned packaging too, where the cupcakes sit into little slots that then fit perfectly in the takeaway box that comes with a handle. It keeps most of the frosting from getting mussed up, but you still do have to be careful not to tip it over. I even saved some of the packaging to transport my own baked mini cupcakes a week later. 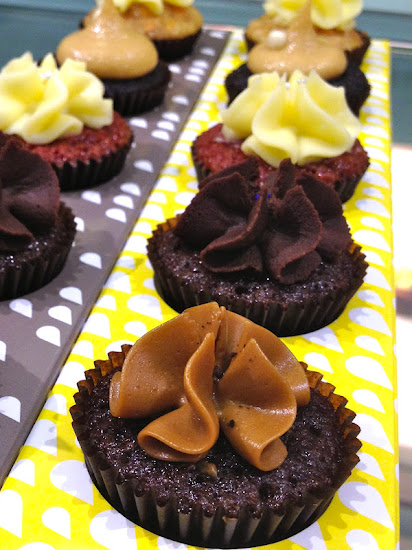 We celebrated a girlfriend's birthday at mala hotpot and the mini cupcakes were the perfect bite to end the meal. Mostly everyone tried Les Bebes' cupcakes for the first time and oohed and ahhed at the cuteness and then became fans after eating them. A few even returned to buy a week later. 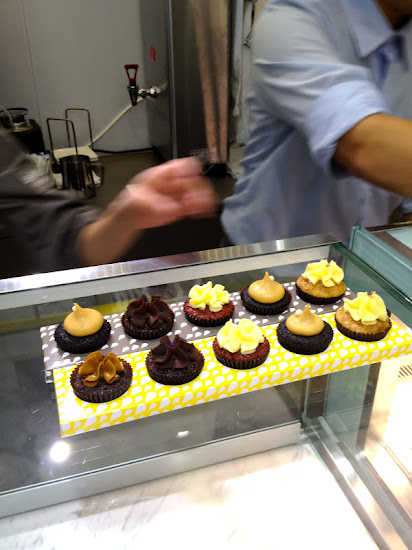 Cupcake lovers will flock to Les Bebes Cupcakery and fall in love too.

thanks for posting this!! will definitely have to check it out, especially with the new MRT stop close by!

This looks so nice :)

Beebs: yes! give it a try. i'm excited to check out the new MRT! and i'll have to update the post

We went Sunday (still soft opening) and left with 1 each of Baileys, Carrot cake, and choc w/ PB frosting. I liked them all. They really were delicious. I'll be shocked if they can make it at that location though. That coupled with their high prices will make it an uphill battle.
www.thebellsite.com

Hi! I'm preparing for a party, and I plan on bringing cookies/cupcakes, etc... I'm debating between

Do you have any advice? Preferences? They all look so goooood!! Thanks!

@cristine- all are good choices so it depends on what you feel like and how quickly you need it. Cookie Jar needs preorder time and We love cookies isn't always open (usually only evenings).
Les Bebes packaging and presentation is always so pretty- so perfect for a party. Hope that helps!