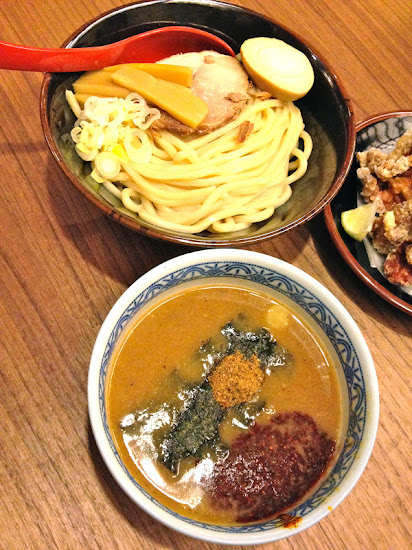 Kid friendliness: no high chairs available, no room for strollers, may be a long wait in line. 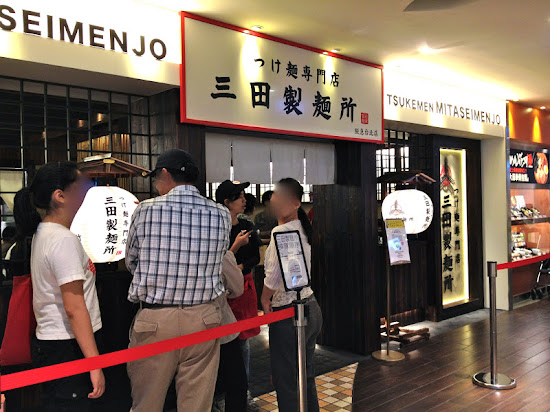 Taipei diners love to wait in line. Or maybe they love food so much that they are willing to wait in line for it, no matter how long. The first time I passed by Mita Seimenjo (aka the tsukemen place) was after lunch at Smith and Hsu upstairs and there wasn't really a line since it was already late afternoon. But I was curious since I had become addicted to tsukemen in LA at Tsujita and I made mental note to return.

The first time I tried to eat at the Taipei  branch of the Japanese tsukemen chain, I made a last minute lunch date with a friend and started waiting in the line. She hadn't arrived by the time I got to the front of the line and I was promptly informed that I couldn't be seated until everyone in my party arrived. It was annoying seeing people pass me by, at least 4 groups or so, while I was waiting at the front. Once my friend arrived, they still didn't seat us at the open seats since the kitchen was so slammed. Since I was in a bit of a time crunch that day, we ended up eating next door at the roomier Azabu Sabo. 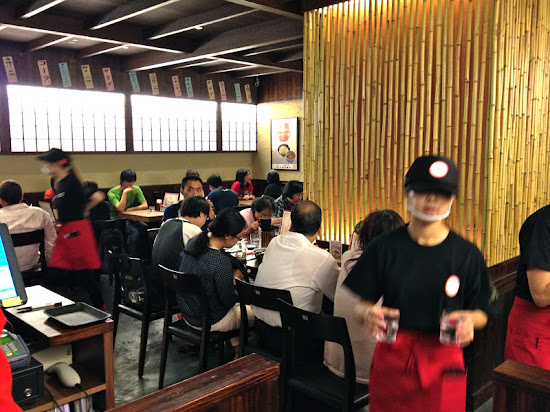 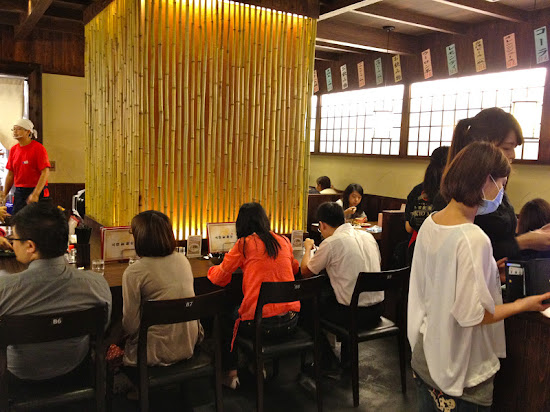 So the next week, of course, I had to return. I went with a different friend a little before noon and the line took about 10-15 minutes to get us inside. Mita Seimenjo's interior is a bit cramped, with small tables and booths surrounding a large table in the center that serves well for solo diners. Printed on the back of the shirts on the waitresses rushing around is "Tokyo Mita, Japanese soul food, serving tsukemen since 2008." 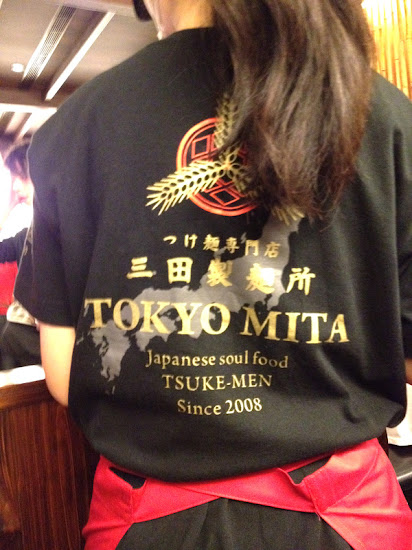 While waiting in line, we discovered that the price was the same for a small, medium or large bowl of tsukemen (NT$230). Only the extra large bowl cost extra (NT$270). Or you could get a regular ramen if that's what you were craving. 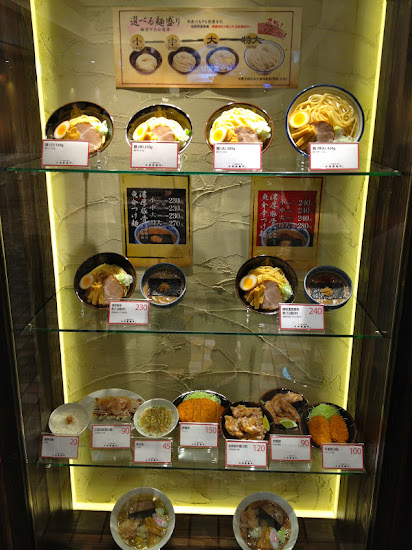 And what the heck is tsukemen? Literally, it's dipping noodles.  A dish where you dip the noodle into the broth, instead of the noodle and broth being served together like ramen. 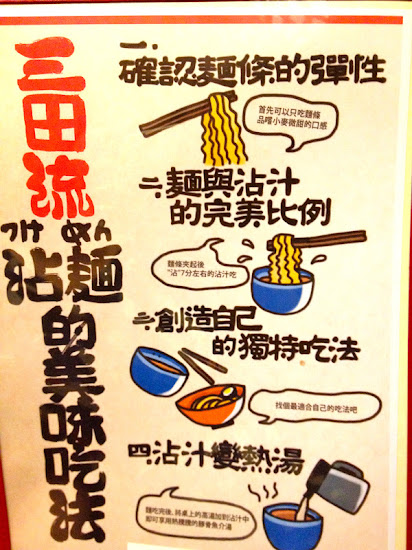 Tsukemen's broth is typically thicker and heavier from being boiled down longer, so that the sauce sticks to the noodles, and has both a fish and pork flavor. If you want to drink the broth, you can pour hot water into it to dilute it and drink it that way. At Mita Seimenjo you can order the noodles either hot or cold. We decided on cold since the waitress said that's how people typically order it in Japan. 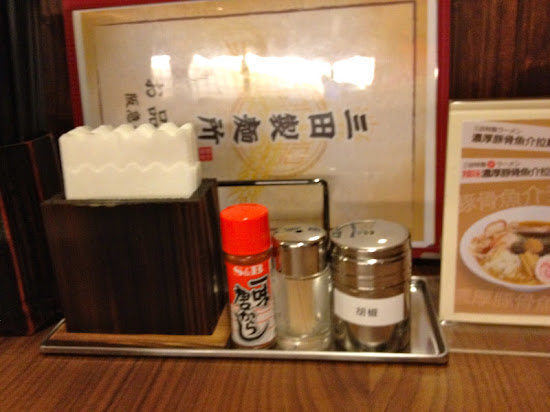 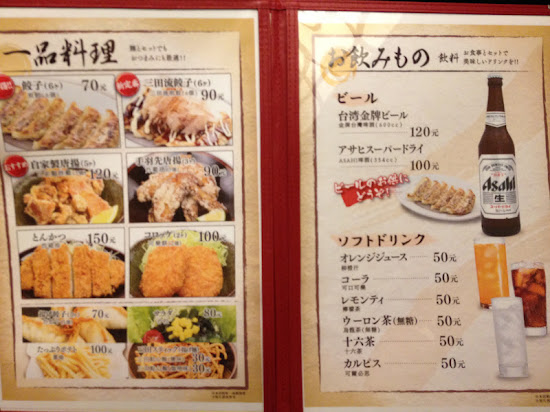 The fried chicken (NT$120) arrives first and it ends up being my favorite dish of the day. Crispy, burning hot at first bite, juicy karaage. 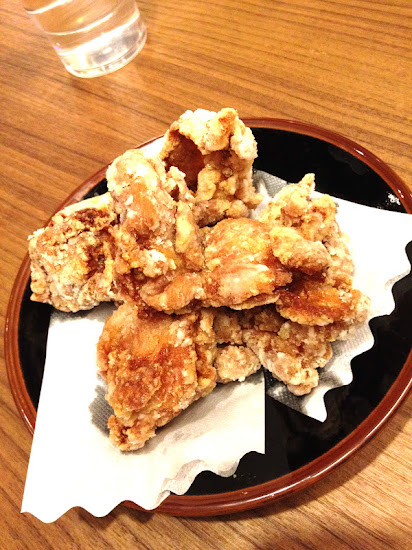 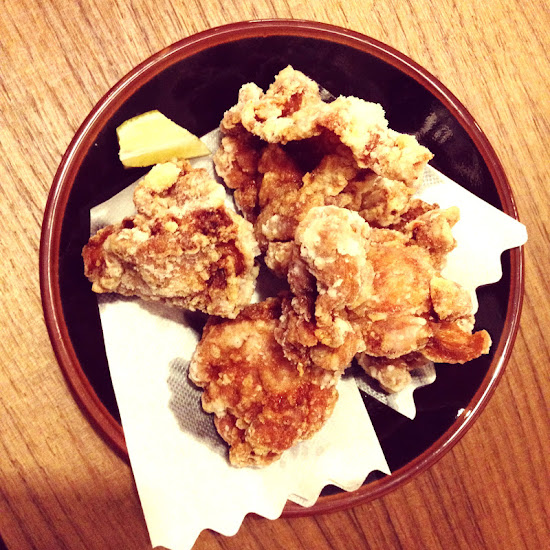 The spicy tsukemen (NT$240) arrives not too long afterwards, and to my disappointment the pork and egg are also cold. The egg is also a regular hard boiled egg, not gooey like the soft boiled egg I've favored elsewhere. 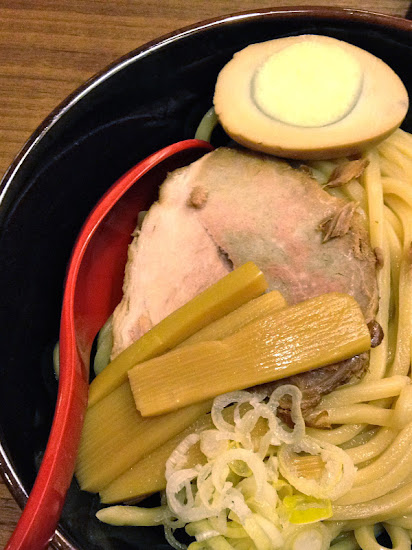 I guess you could warm it up in the broth, but the broth is hot, but not steaming hot. I also ended up ordering the spicy version which was a tad too spicy for me and overpowered the flavors of the rest of the bowl. 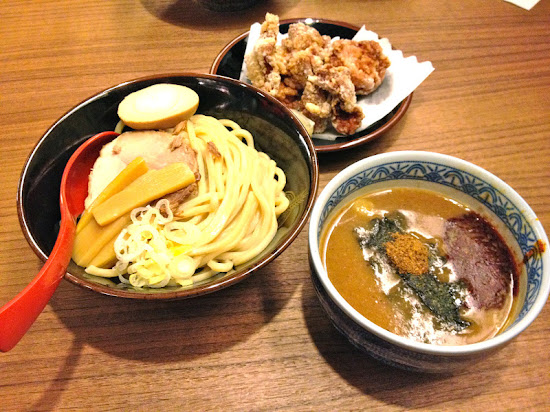 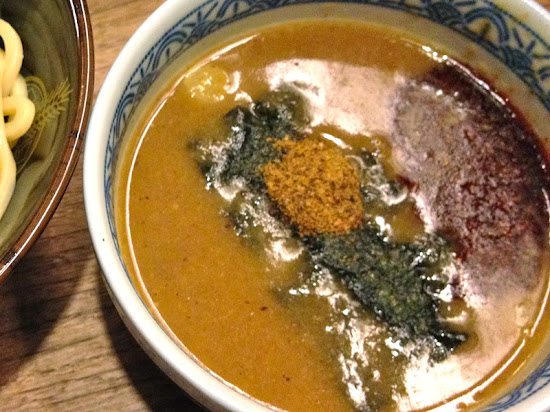 The noodles are also thicker than regular ramen, like a fat spaghetti. It's very chewy, but the medium bowl was quite filling. 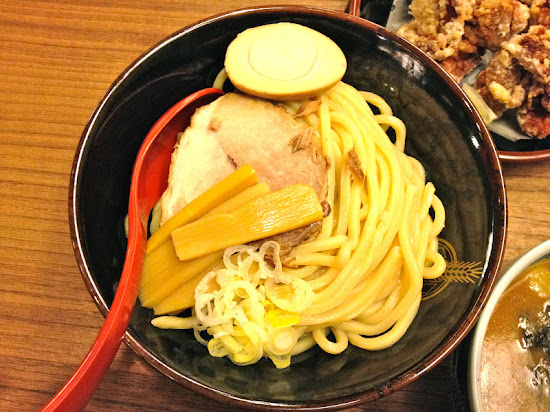 The gyoza (NT$70) were alright, stick to getting crispier guo tie elsewhere. 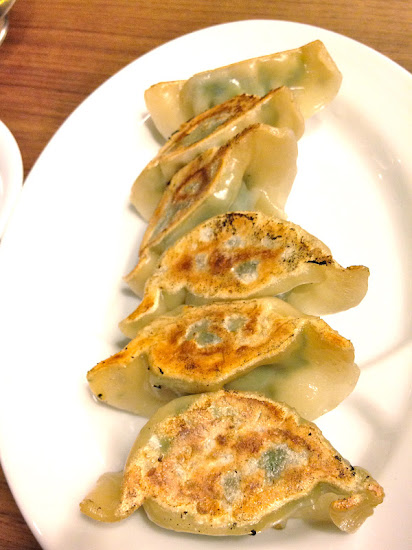 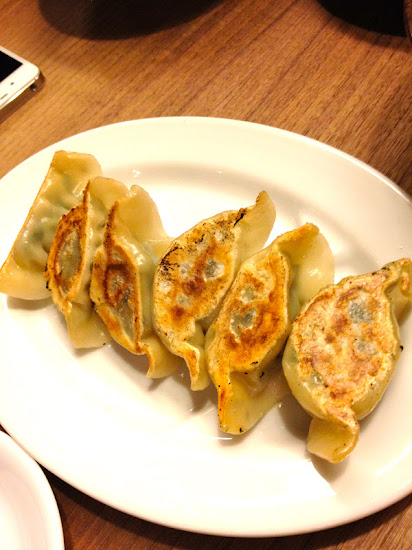 All in all, I was slightly disappointed. It definitely didn't live up to the flavors from Tsujita and it definitely wasn't worth waiting in a long line for (twice!). Maybe I would have been more dazzled by it if I hadn't tried Tsujita first?

If you still want to give it a try, I'd suggest avoiding peak times (go before 11:30AM or after 1:30PM, and don't go with too large of a group, and of course make sure everyone is there when you get to the front of the line). My noodle/broth/eggy egg craving was left so unfulfilled that I ended up trying Ippudo the day afterwards. Do you get the tsukemen craze or do you prefer the standard bowl of ramen? 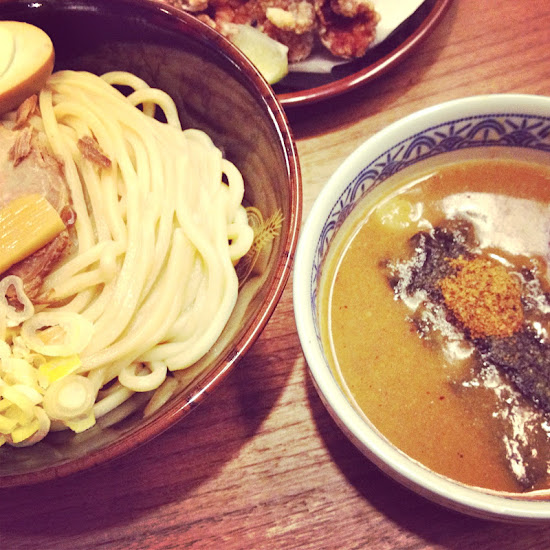 I go to this store all the time here in Tokyo. One thing I agree with you is that the egg should be "hanjukuk", half cooked. Other than that, I guess you have to develop a taste for it. The noodles, menma, pork, etc all have to be cool and then dipped into the warm/hot broth. It's especially good during the summer. But I suppose Taiwanese aren't used to eating cold foods.

I am not Japanese btw, so I wouldn't say it is a Japanese thing only to like it. I personally loved it the first time I ate it here.

Anonymous: thanks for your comment.. I like dipping the noodles in the broth to make it warm, but I don't think it works for the meat for me. I don't know about other Taiwanese eaters, but I compared it to the tsukemen that I had in LA at Tsujita which was also very popular there.. And I think better, personally

I went there today and I noticed that the egg wasn't just a regular hard boiled, the yolk was runny. It was pretty salty though. This was my first experience with tsukemen and I am definitely going to try it at Tsujita back in LA.