news/restaurant roundup: where can you find... Thanksgiving in Taipei 2012? 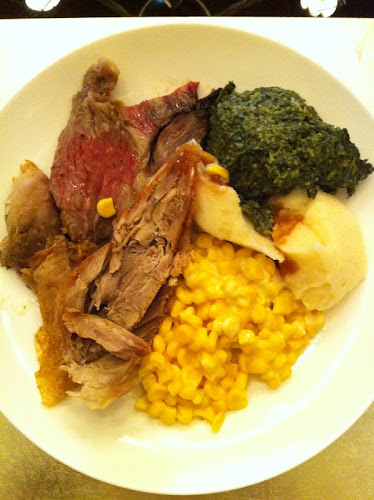 I'm thinking about turkey already. When I first moved back to Taipei over seven years ago (!), one of the holidays I missed most was Thanksgiving. It is really one of the holidays I remember celebrating with my family growing up, and our meals were always a unique American _and_ Chinese spread on the table... turkey stuffed with sticky glutinous rice (my mom's recipe), stir fried green beans sweetened with sugar and soy sauce (my dad's recipe), my favorite candied sweet potatoes, or creamed corn out of the can (my sister and my contribution as kids). Ha ha.

Being apart from my parents and family in Taipei for this holiday, I always tried to figure out how to capture the experience away from home, not always succeeding, especially since I didn't know where to find it. (Anyone seen Stovetop stuffing boxes or cornbread mix in Taipei?) Now I have a great group of family and friends to share the night with, and I take a moment to remember to be grateful for them and all that I have in my life.

So whether you just moved to Taipei, happen to be here on a business trip, or are just craving some turkey, here's a round up of options for you and yours. Some pricing may vary, had to base it on last year's pricing for some.

DINE IN-
Make your reservations now and if you pick buffet style, show up early to make sure you get enough turkey. Some restaurants offer turkey dinners throughout the weekend.

TO GO -
A great option so that you can have that turkey carving experience and make some of your sides on your own. For most, at least 3 days advance notice and available until the end of December. (And thank you Google Translator and no thanks to hotels that don't put their info in English)

Check last year's Taipei Times article for details on the above restaurants.

So where have you had Thanksgiving in Taipei? At home after slaving over a hot oven all morning? Or taking it easy at one of the other restaurants in town? Let me know if I've left one off the list, or if there's one that's better than the rest! It doesn't quite feel like a holiday with most people having to go to the office or school on Thursday and Friday, but at least we can eat some turkey.

Email ThisBlogThis!Share to TwitterShare to FacebookShare to Pinterest
Labels: thanksgiving, where can you find

Thank you so much for this list. I've been getting the Caesar Park/Checkers turkey basket for the past couple years and it's always been fantastic. It might be time to try a new place.

Makkah Market is a Middle East restaurant that provides their products 24 hours online, with an assurance of making it simple to get those hard to find ingredients.

tanya: you're welcome! it's good to know the caesar park turkey has been great.. post some feedback if you try a new one!

thanks for sharing joan! which place do you think would be the best? hahaa! just by pure...guessing? we're ordering a turkey this year but my mom wants to order one from hsing tung yang; i think it'll be awful!

Thank you! This is an Amazing list and is very appreciated. All of my homesick American friends will be using this.

I have a full size oven and want to cook a turkey myself. Where can I find a raw turkey to buy? I checked with Costco in Neihu and they're not selling them this year. Any leads?

You can buy your own frozen turkey to prepare by yourself here: http://www.thomasmeat.com.tw/eng.htm
They may also have frozen turkeys at Costco?