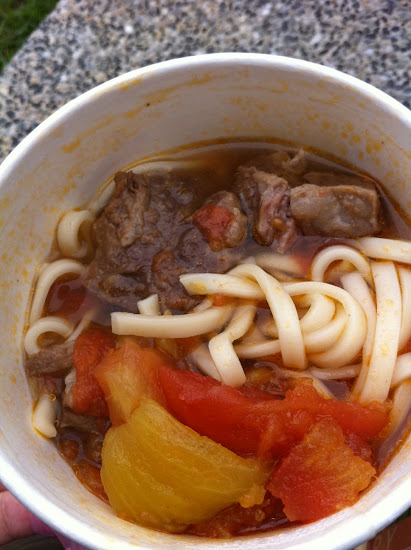 website: tbnf.tw (official site has English but hasn't been updated since 2005)

A bowl of beef noodle soup is like the chicken noodle soup of Taiwan- a bowl of comfort, one of the must eats if you visit Taiwan, and one of the top things missed once you leave.

It's almost that time of year again, so I thought I'd pull out my photos from last year's 7th Annual Taipei Beef Noodle Festival and post them up to prep us for this year. If it isn't on your calendar, then save the date now, as it usually happens every fall (and hopefully the details will pop up soon!). A few years ago, I caught the festival in front of Taipei City Hall, but last year they moved it to the Expo Dome near the Yuanshan MRT. The Expo park might look familiar to those of you who caught the Flora Expo there. 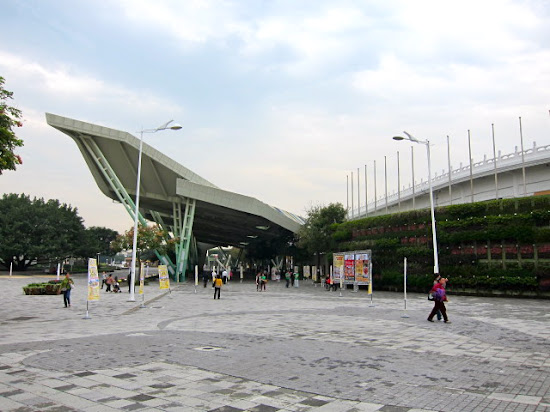 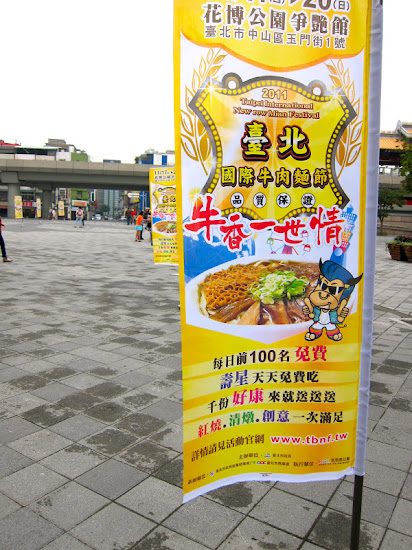 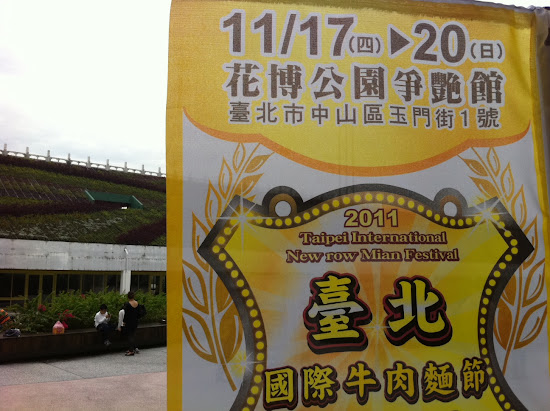 If I could offer a few friendly pieces of advices to the organizers, it would be (1) If you are going to romanize the Chinese for the event, then please use "niu rou mian" and not "new row mian." I know that it's probably too late ("new row" is now even in Wikipedia for beef noodle soup), but when I saw it last year, I was confused. Heck, if you are going to try to make foreigners try to pronounce it correctly, it would be closer to "neo" than "new." Or at least capitalize the "r" in Row if you are going to separate the words. Anyways, probably not going to happen, but I had to get that off my chest.
But maybe they can hear me out about my next point. (2) All the pamphlets and information at the event are in Chinese. There's a handy booklet with all the beef noodle shops at the event, and their addresses to visit after the event, but it's ALL in Chinese, and no separate English information whatsoever. If Taipei wants to become a top international foodie city, or have tourists flocking from around the world to come sample bowls of beef noodles, then they are going to have to do the homework and help us out by printing up some English. I (of all people) know that it's a tedious task, but it would make a world of difference. And the demand is there-- I know because the readership for the blog has grown so much and that's because of the lack of information in English out there about Taipei destinations, and not the lack of love for Taiwanese food. If you need an English consultant, let me know! 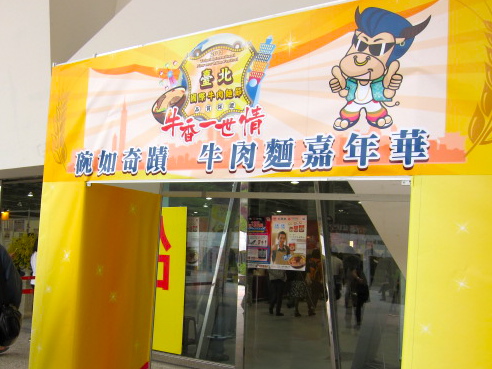 At the entrance, there's a small entrance fee and the inside is split into two sections- one is various vendors selling foods to eat or take home, like Taiwanese sausages and the other (more crowded) side is where all the beefy, soupy goodness is. 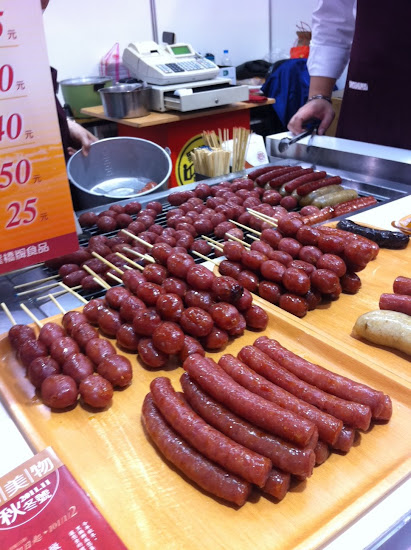 Be prepared to wait in line and to take some time to find seating. If you've ever been to an Asian food court on a busy weekend day, you know what I mean. Even though the seating was more than in previous years, it still wasn't enough. Bring some friends and tag team. Have one save seats and switch off browsing for beef noodles. 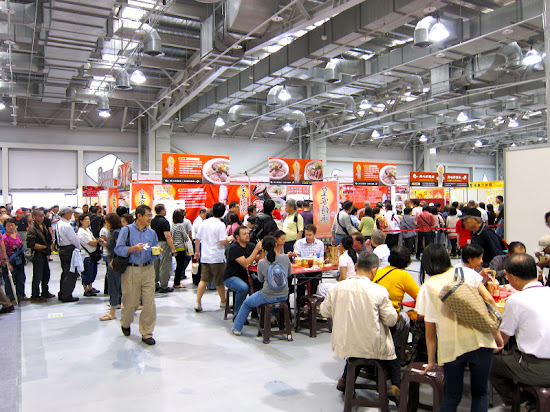 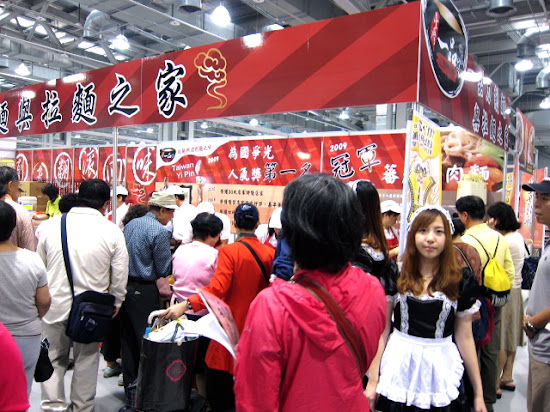 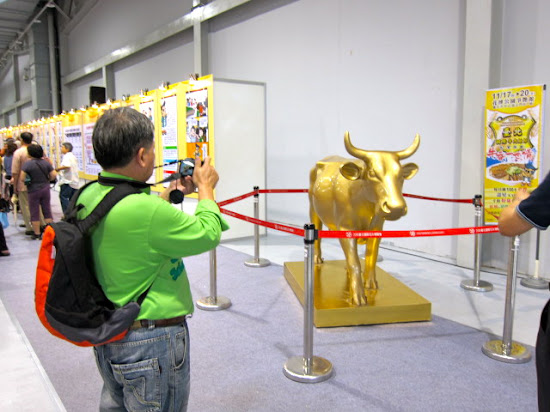 Over 30 vendors bring their best to create a one stop shop for beef noodles lovers and sell small bowls for NT$50 each to sample and slurp. Besides being a food carnival for the past seven years, there's also a competition for the official title of Taipei's Best Beef Noodle Soup. There's different categories to compete for- best traditional spicy braised, best clear broth, and most creative. Last year's winner for best hong sou or red brothed niu rou mian ended up being first time participant Chef Hou Chun-sheng whose bowl can be tasted at Room 18 beat out 200 competitors. I didn't get to try it last year, but maybe I'll look for it this year. 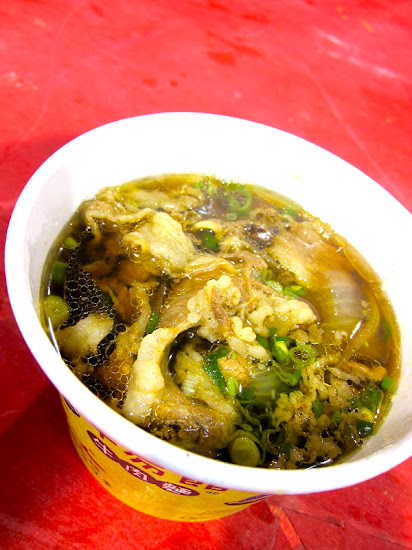 I was a bit impatient, so I opted for booths with the shortest lines. I figured that I could always try the champions on another date and I didn't want to wait in long long lines for lunch. Others might have a different approach, only wanting to wait for the best. 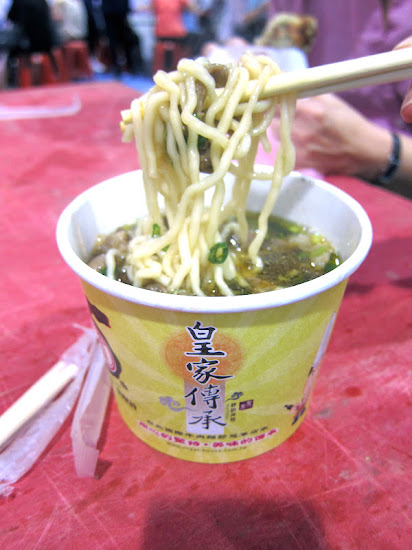 I didn't do a great job remembering which noodles were from which booth since everything was in Chinese, but I'll try to take notes this year.

Lots of food being prepped on the fly, like tripe and tendon to eat as a side dish or in the noodle soup. 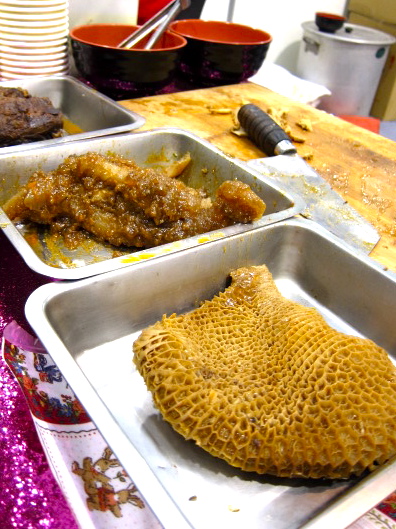 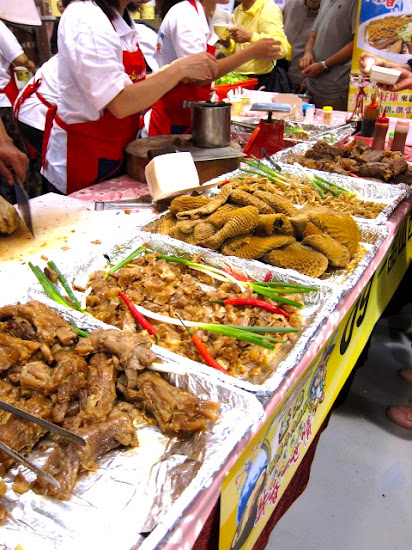 I waited in line for some beef rolls, but I probably would skip it next year. There was barely any beef in the roll, filled with mostly lettuce, and I've had better at the food courts. 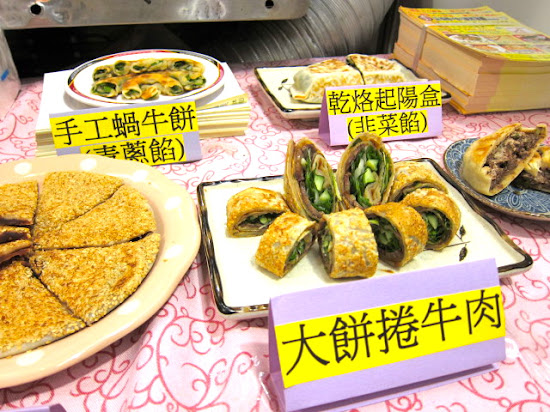 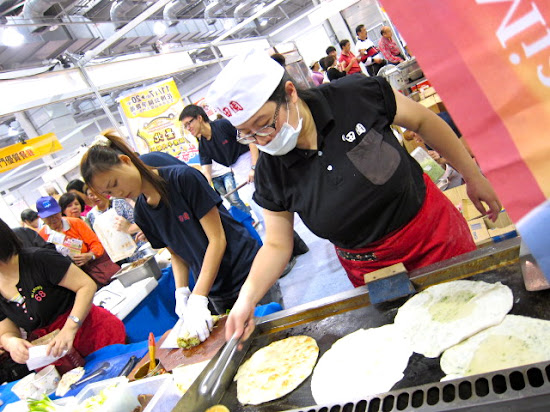 Working as fast as possible for the hungry people in line. 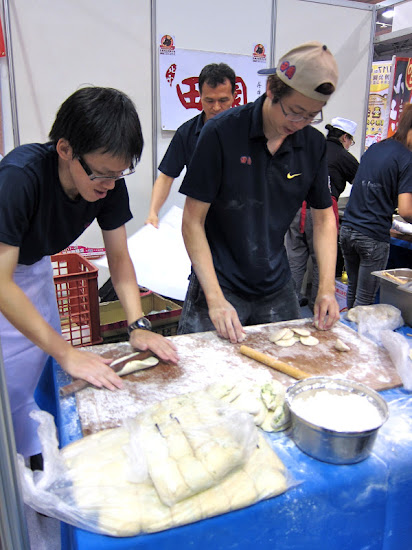 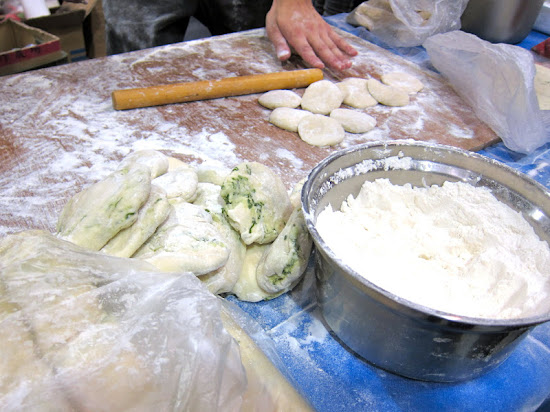 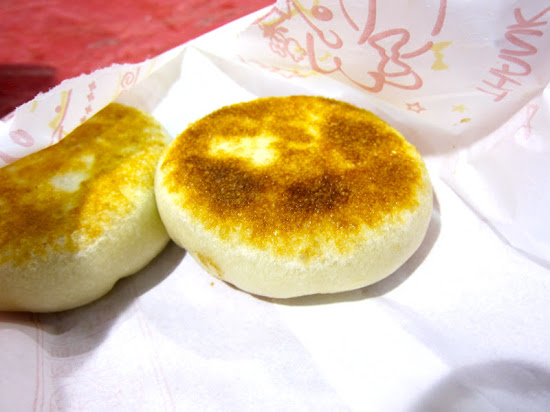 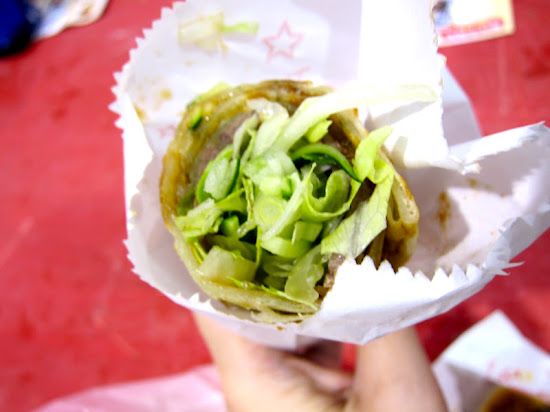 A good bowl of beef noodle soup should have equally delicious sum of its parts- the broth, the noodles, the beef and the flavors all play a role. If you've never had knife shaved noodles, where the chef sends slivers of dough flying into the boiling pot, you must give it a try. This was probably my favorite bowl of the bunch I tried that day. 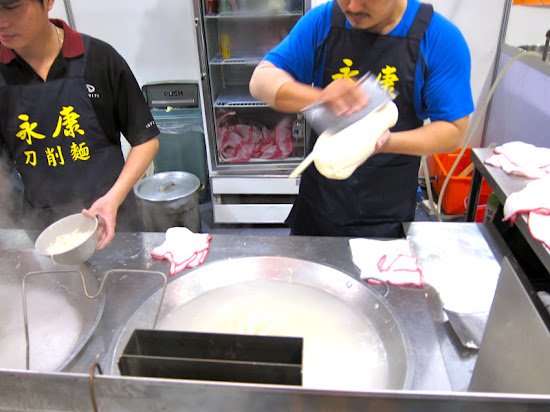 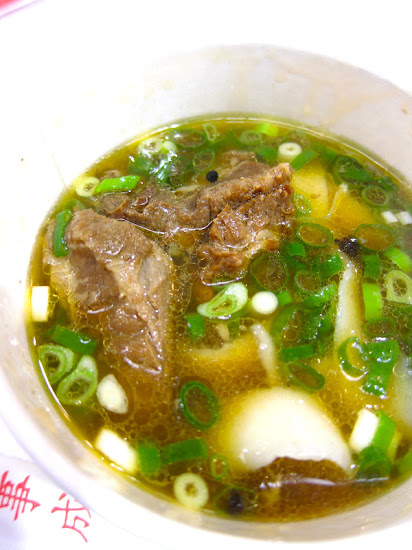 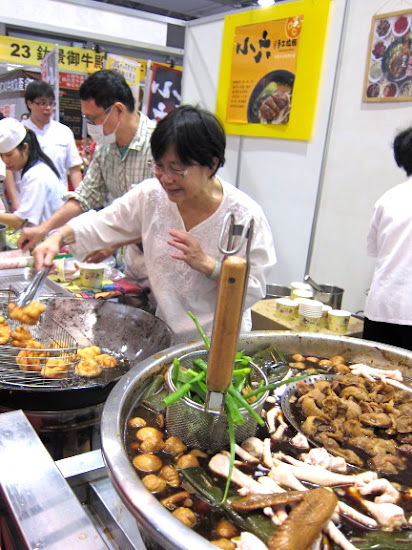 My last bowl was also chosen because there was no wait, but definitely not a traditional bowl. It had udon noodles and kimchi and thin slices of beef. Probably most like something I could make at home, but maybe this year I'll have to wait in line for some of the previous winners. 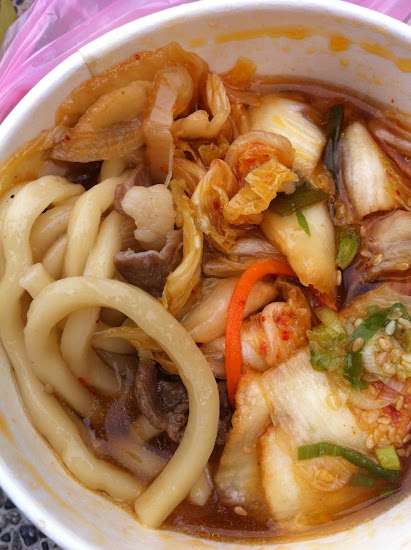 Hungry Girl, the noodles that you tried, were they "rice" or "wheat" noodles?

Looks very beefy and yummy too! I love noodles :)

mendel- thanks so much for the link.. definitely buried deep in that website!

I dint know they have a beef noodles festival until I came across your blog. Thx for sharing. Do you by any chance know the top winners address locations and opening hours?