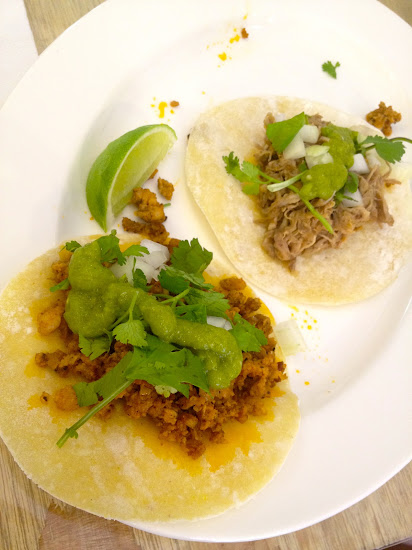 MRT: Liuzhangli or DaAn (probably a 20-30 minute walk away) 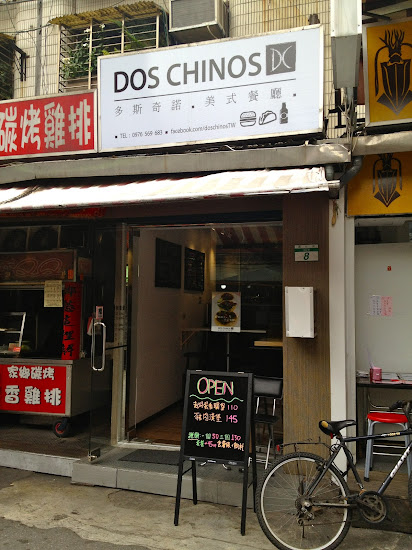 Barely four weeks old, Dos Chinos is the newest "Mexican in Taipei" spot to try. While not as small as Taco to Go (which I saw smartly revamped its space to make the kitchen smaller to make more seating available), it's pretty dang tiny with only seven seats inside. 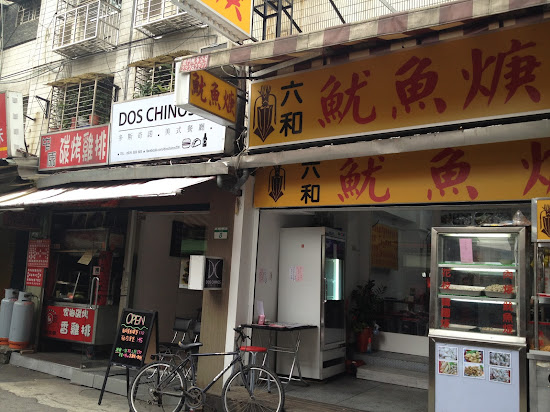 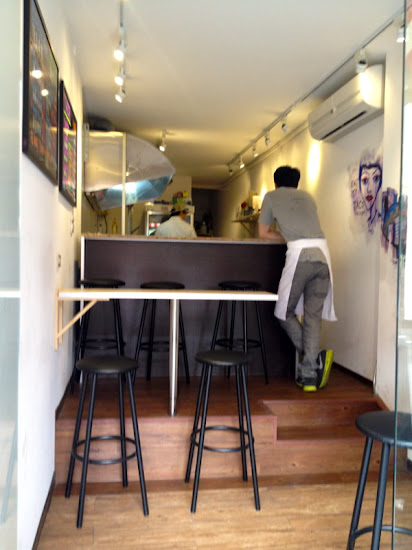 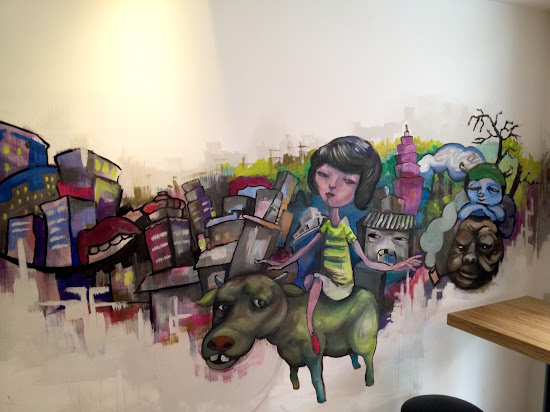 Dos Chinos keeps it simple by offering only soft tacos and burgers with fries and drinks. No chips, no pico de gallo, no hard taco shells, no quesadilla fussiness. Just chorizo, carnitas, chicken and veggie tacos. Don't know if that will change in the future, but they make the most of their supplies by also offering a pulled pork or chorizo egg and cheese burger. 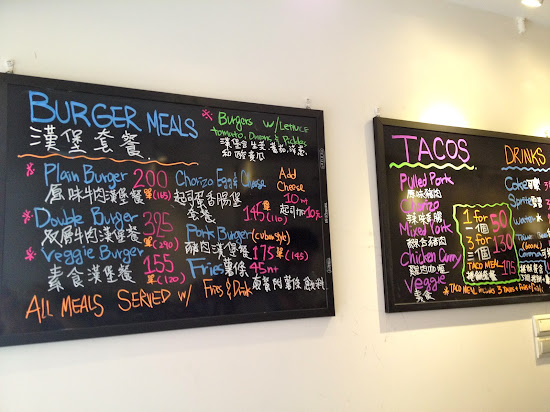 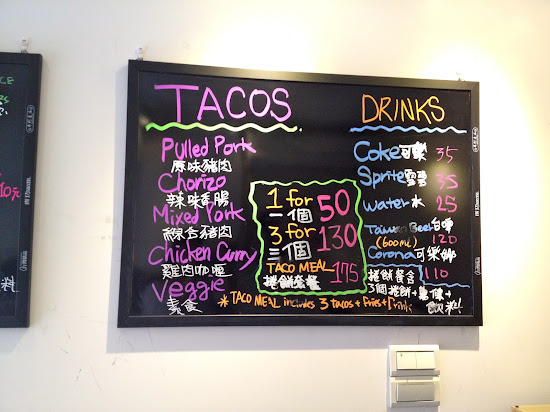 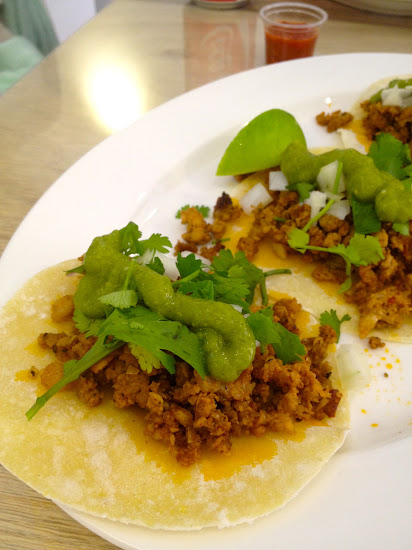 Chorizo is definitely a rare find in Taipei and Dos Chinos makes a good rendition of the spicy ground pork. Tortilla, a pile of meat, cilantro, onions and some green chili sauce. Squirt on some lime and you're good. 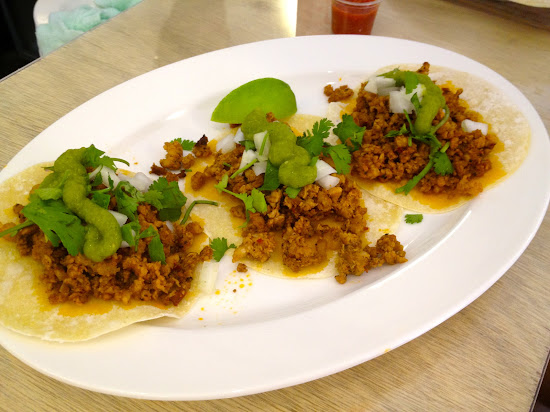 There's also a spicier red chili sauce that we had on the side.

I like how everything is made to order so the food comes out hot. While places like Juanita are quick, a complaint I've heard from friends is that the food sometimes is not hot, especially towards the end of the day. I also don't mind that the tacos have only one tortilla instead of two. 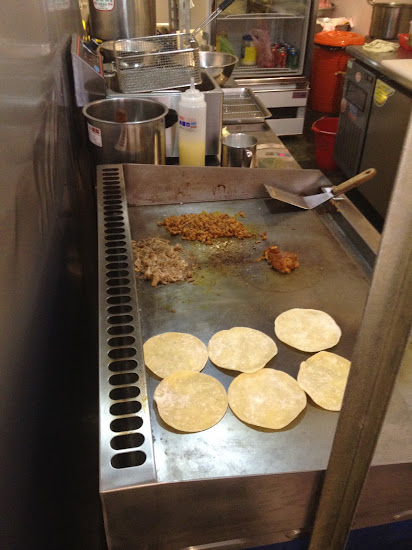 Next up, the pulled pork tacos. Spot on. While the tacos are not huge (as they are not supposed to be), I think they put a fair amount of meat in them. That being said, one would probably need to eat 4-6 of them to be full. 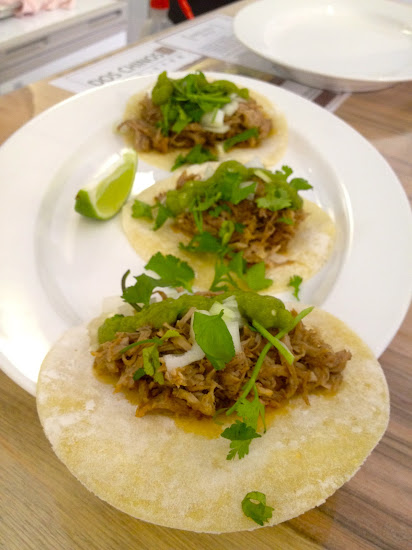 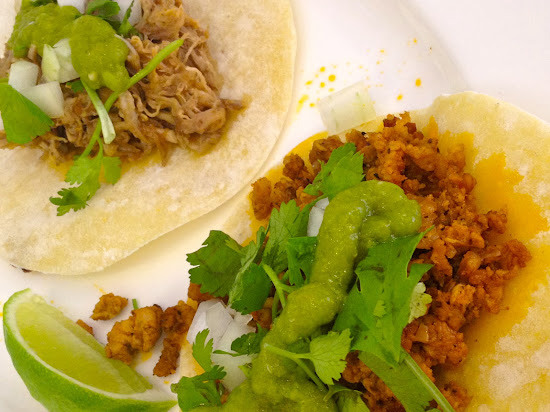 My two friends and I shared two trio of tacos which wasn't really enough, so we ended up trying (and splitting) a pulled pork burger (cuban style) (NT$175) which came with muenster cheese and pickles.  The chef was kind enough to cut it into thirds for us. Haha. Mostly everything at Dos Chinos is housemade, including the pickles and the chorizo. 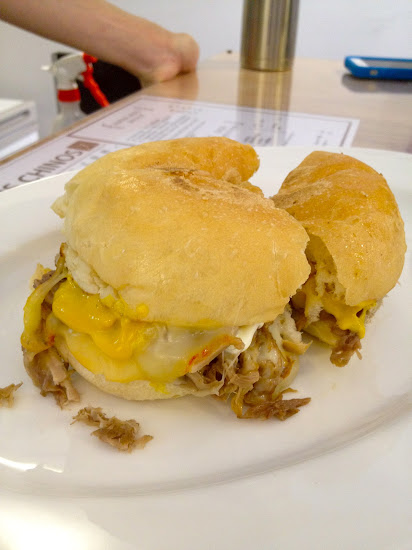 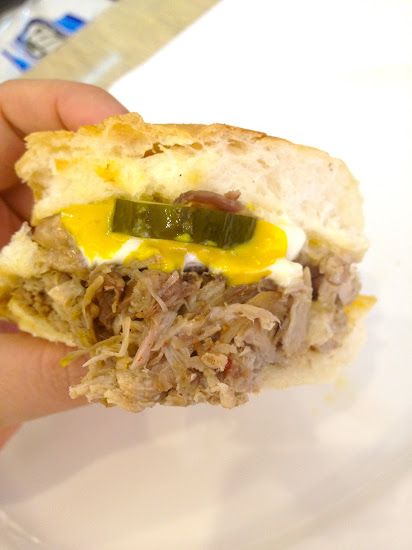 While Taipei will probably never get a taco stand that will please everyone, Dos Chinos is one step closer and definitely worth a try. It's definitely better than the overpriced tacos you'd get at many of the sit down restaurants around town. You could drop by before going to the Tong Hua night market or late night on friday nights for their happy hour. Thanks to reader Jackie for giving me the heads up!

I just went to check it out. Not bad, especially for Taiwan, I much enjoy this more over Juanitas and Machos, taste more dirty authentic to me ala taco trucks in LA.

I spoke to the owners and they mentioned eventually they'd like to add carne asada, but beef is just too expensive to buy until they get steady customers. they would also love to add california burritos (san diego style) and have specials.

def approved. I had them crisp my chorizo a bit. chef also mentioned he would love to use stomache/tripe/belly and cabeza... but who knows if people will take to it.

hey Sean! thanks for commenting. glad you liked it too! that sounds good to have them crisp the chorizo! i'm definitely going to have to try that. And i think locals would totally be down to have tripe etc tacos..

I just tried this last week and I loved the pulled pork and chorizo tacos. I had 3 pulled pork and 3 chorizo. lol My only complaint is that it's a bit out of my way and not really in a convenient location. Not sure how often I'll come here because of that.

I LIVE RIGHT BY THERE! I'm really excited and can't wait to try it out tonight! I no longer have to walk forever to go to Juanitas!

Thanks Hungry Girl for the rec, finally made it out there and had some great pork and chicken soft tacos! I concur with others, much better than Juanita and Macho, just a shame it's a bit out of the way

Great taste! I would eat this Mexican even if it were back in the States. I hope they get enough support to grow. It's by the night market so there's some sight-seeing too.

now that Dos Chinos is temporarily closed(hopefully only temporarily), any suggestions for a place to go for Mexican? other than macho & juanita?