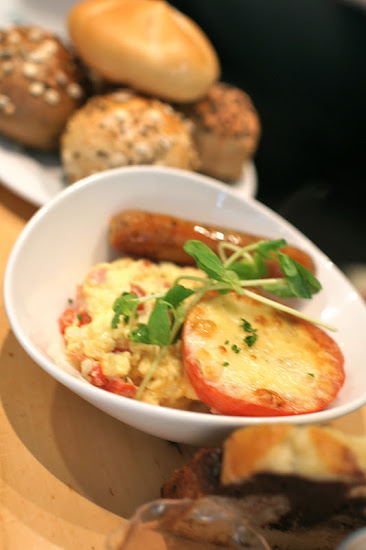 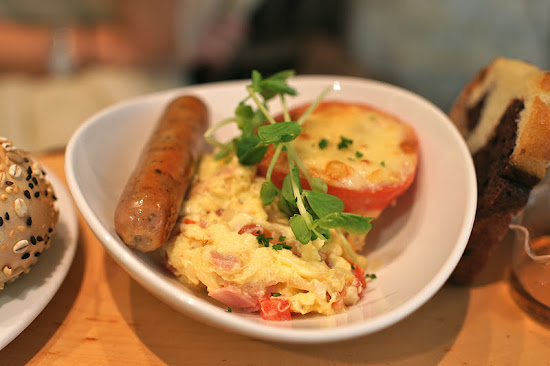 Wendel's is a German bistro/bakery that has been in Tianmu for over 10 years and opened up a branch in East District last year. It was last year at TAS' food fair last year (or was it the year before that) that I got a taste of the sauteed mushrooms and was convinced I had to try more. Besides having a wide array of breads and cakes for in house or take away, there's also a breakfast and lunch menu to dine from, including pizzas, salads, bratwurst, pork knuckle (which I heard is very good) and goulash. 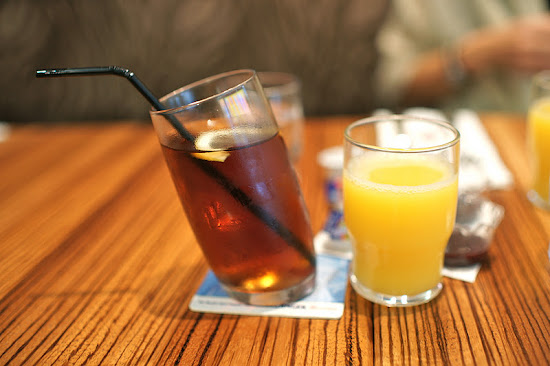 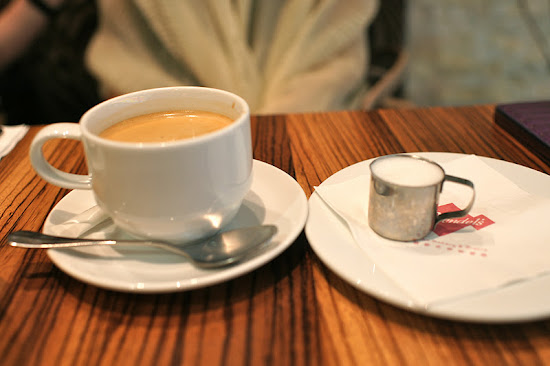 Their breakfast sets include various options such as the Heidi Klum (NT$260) which includes an egg white scramble, or a gourmet brunch for 4 people that has the works plus champagne. 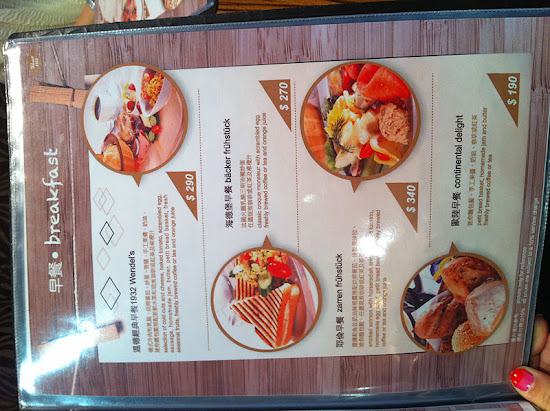 Each breakfast set also comes with a basket of their breads, in miniature sizes, as well as orange juice and coffee or tea. 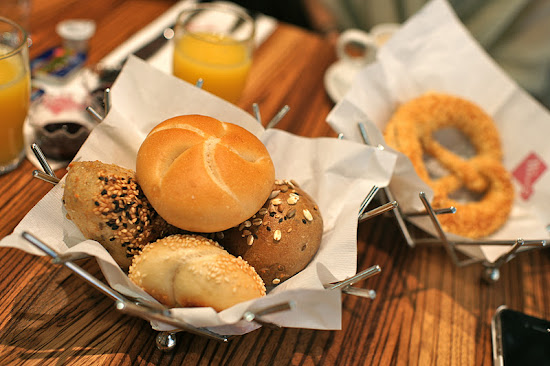 I also like their bretzels and if you're super hungry, you can order one to eat there and they will warm it up for you. 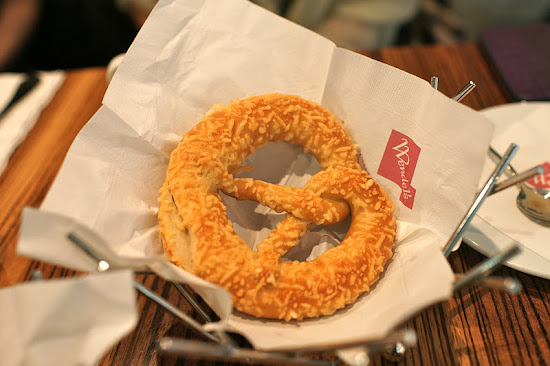 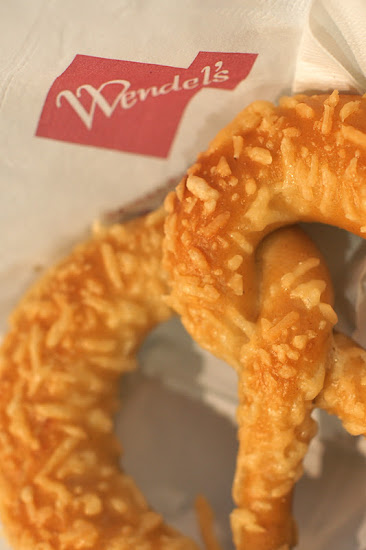 My friend got the 1932 Wendel's (NT$290) which looked pretty impressive as it arrived to our table, with cold cuts and cheese, baked tomato, scrambled egg, sausage, petit bread basket and fresh fruits. 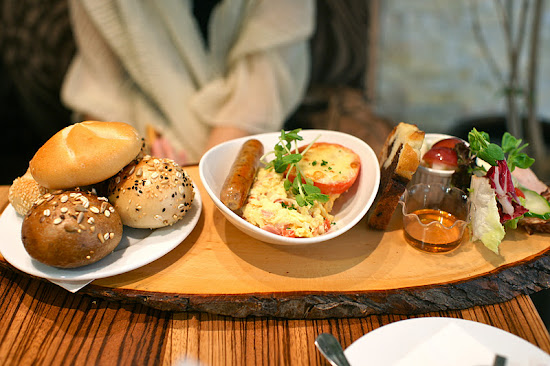 I really wanted the mushrooms and since they were only available on the vegetarian choice set (NT$260), (and ala carte during other times) that's what I ordered. But something got lost in translation when I asked for no watercress and bean sprouts with my eggs and no eggs came with my set. 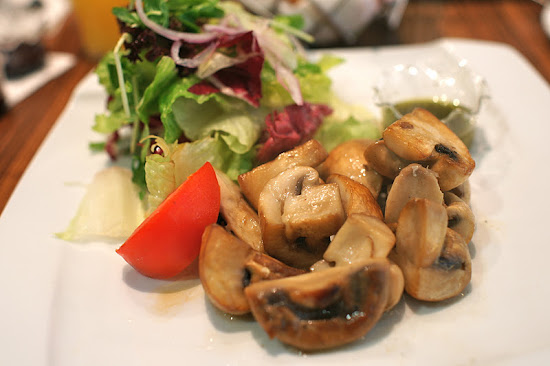 But after letting my server know, they were quick to talk to the kitchen and a turkey ham and tomato egg scramble was served to me. 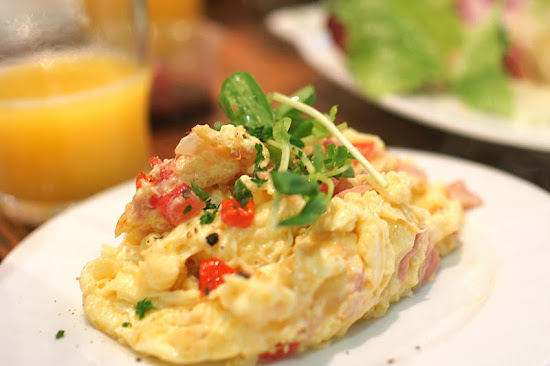 Everything tasted so good, the eggs were creamy and not overcooked and the mushrooms were hearty and juicy as I remembered. The little touches separately Wendel's from many of the brunch places in town like the cushiony petit breads in very MoMA-ish bread baskets and the tilted cup of ice tea that had a slightly dizzying affect on us. 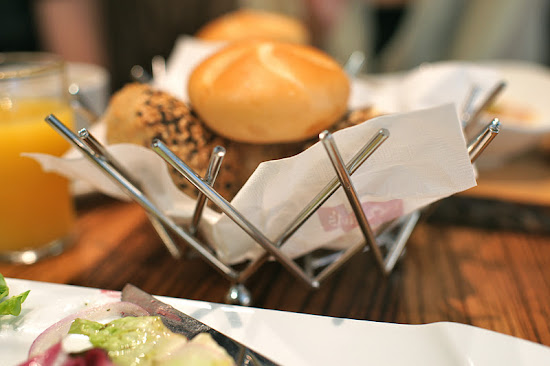 And the tasty housemade jam that complimented the chewy breads perfectly. Larger versions of the semmel, walnut rye roll, sesame twist and malt roll can be picked up to take home at the counter. 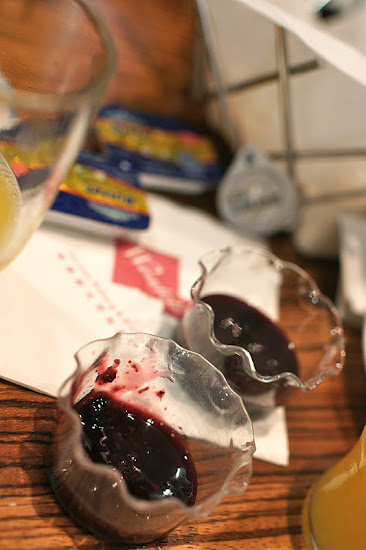 Even though the sets seem on the pricier side, it's tastier than the typical scramble eggs with bacon and hash browns plate around town. Also, when it's not busy, Wendel's is a nice place to chat and brunch with friends. 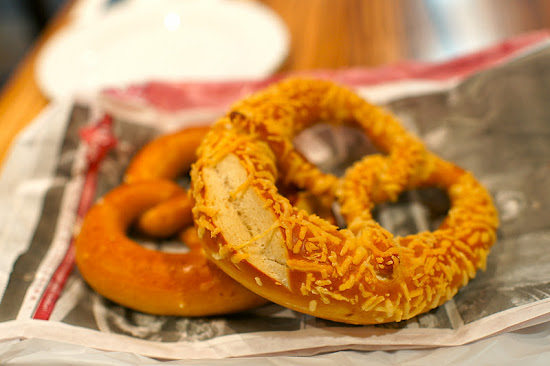 Wendel's Da An branch is having its one year anniversary soon on November 22, and doing special promotions that day with their baked goodies. Perfect day to pop in and try it out. 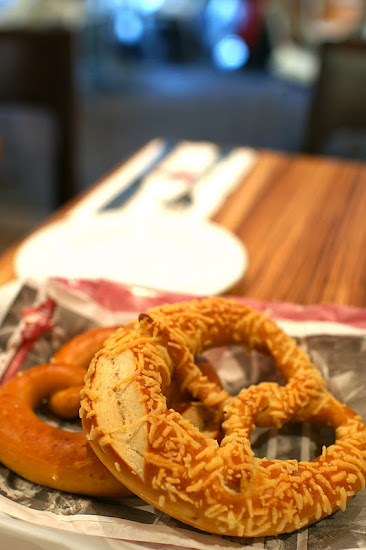 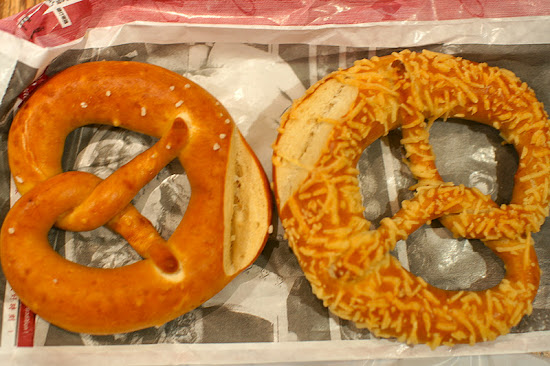 I think, now, I have to go there! To see for myself!

My biggest impression of Taipei foods when I visited (thanks, hungry girl :D ), was the large selection of quality items to be had, at reasonable prices. Looks like Wendel's is another winner in that category...

Just a heads-up: their website is at http://www.wendels-bakery.com/ (missing www results in awkwardness)

Regardless, that looks like a place I got to visit...

If you plan to stop by their Da an bistro, I recommend making a reservation. When we stopped in on Saturday, they did not have any tables for walk ins. We had to wait for cancellations. Their pork knuckle and bratwurst left much to be desired. The sauerkraut was average. The bread basket was disappointing. They charged extra for subpar "homemade" blueberry jam. The pizza bread was good though. The desserts were also pretty decent but overpriced in my opinion. Note that breakfast dishes are not offered after 11:30am which I find to be odd on the weekend.