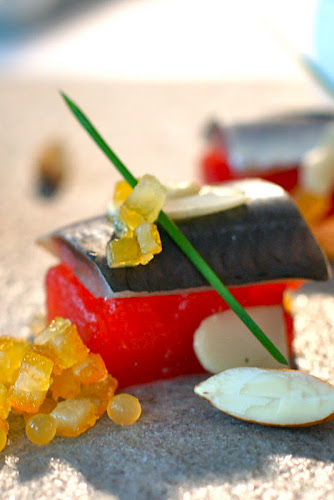 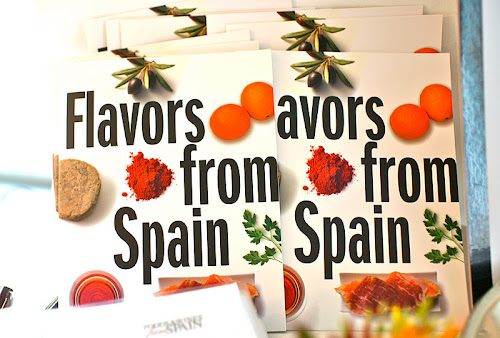 Ever since Robuchon set up shop in Taipei, it seems that "Michelin Starred Chef" has been the buzzword around town. So for three nights only from November 9-12, Chef Ruben Trincado, owner and chef of Michelin-starred restaurant Mirador de Ulia in Spain, takes over DN Innovacion to showcase his avant-garde techniques and dishes. 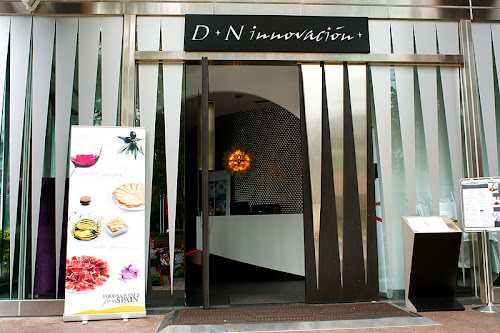 Thanks to the Spanish Chamber of Commerce in Taipei for inviting me to the press luncheon to get a taste of Chef Trincado's special menu. I don't often go to media events, so it's been an interesting learning curve. At this one, they had plated dishes on a table for bloggers and media to take photos of which looked slightly different from the samples we were served cocktail style later on. 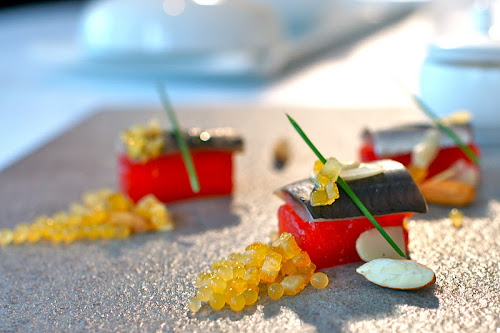 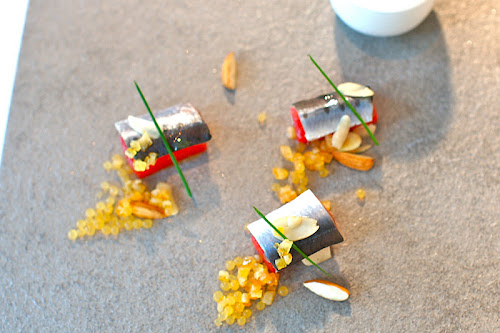 The Sardines Ajoblanco Watermelon and Bitter Orange featured a thin slice of raw sardine and strong flavors underneath the creamy foam. 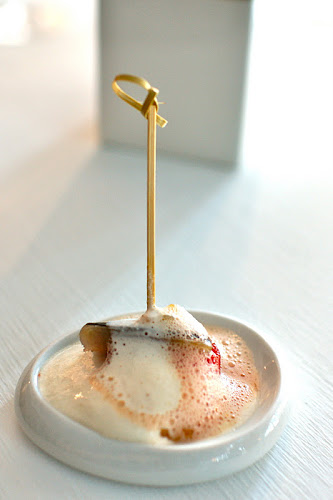 Introductions and speeches in Chinese and Spanish. I didn't know that Fun Taiwan's Janet Hsieh spoke Spanish! She sounded fairly fluent, joking with the chefs and beverage sponsors. 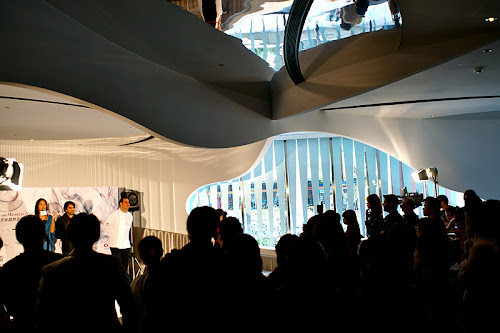 Chef Daniel Negreira has a roster of Spanish Michelin starred restaurants on his resume- El Bulli, Arzak, Akelarre and Mugaritz- and had a Spanish restaurant in Taipei, El Toro, before opening DN Innovacion.
. 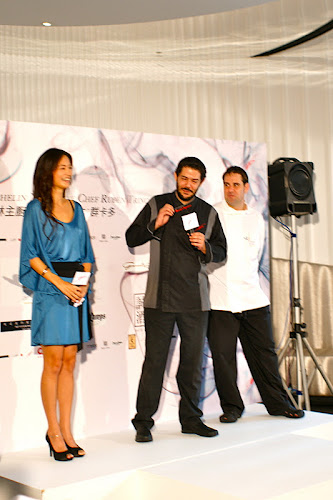 The Wild Italian Porcini on His "Ambience" featured porcini mushrooms on a bed of black sticky rice, playing into the visual that we were plucking and eating them from the field and soil. 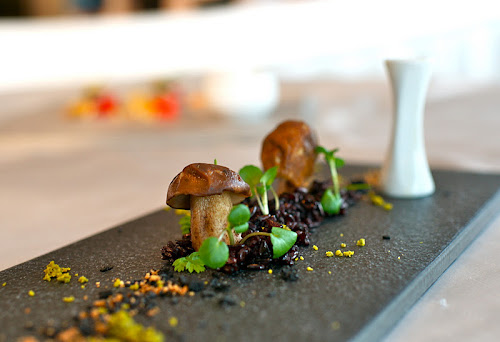 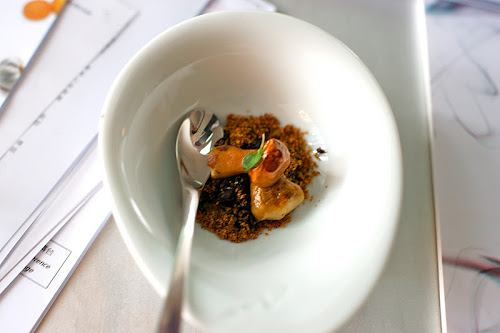 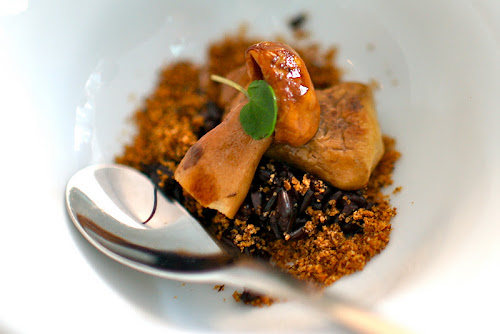 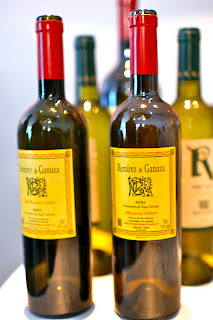 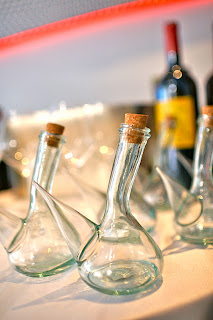 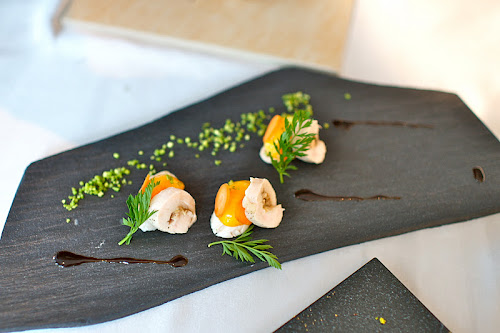 Which came first- the chicken or the egg? Well with this dish, named The "Farm" on a Plate, they come together. Tender chicken roll slices with slow cooked egg yolk made for a creamy bite. 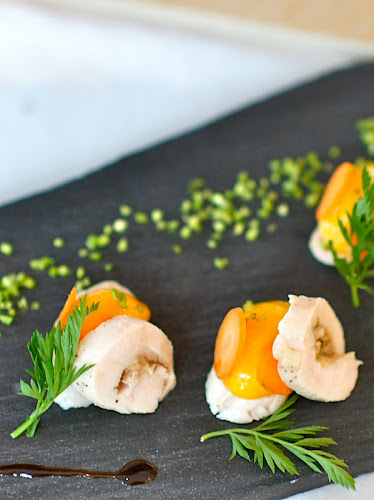 For a while there wasn't any food coming out of the kitchen to eat but this, so I might have eaten three spoonfuls of them. 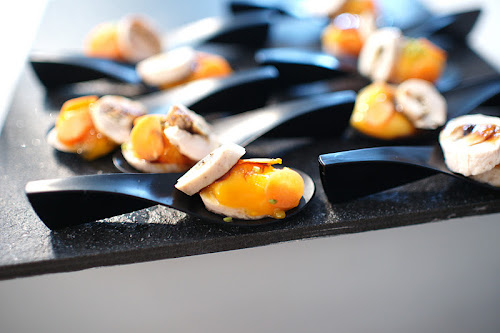 All of us Top Chef fans have seen various things being frozen or made into ice cream, but this was the first time I've seen squid ink getting the liquid nitrogen treatment. 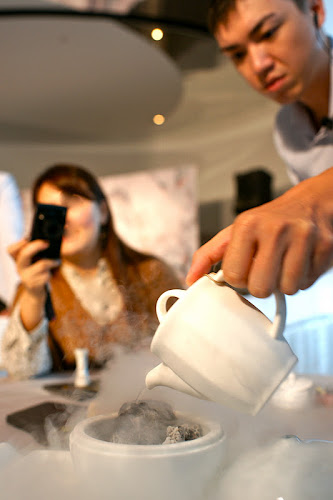 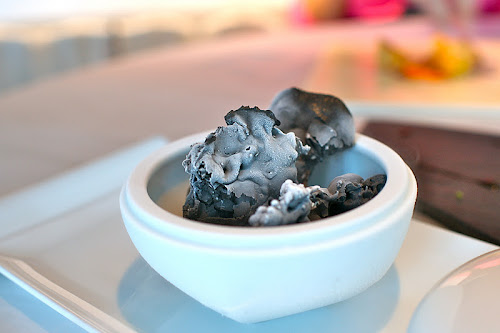 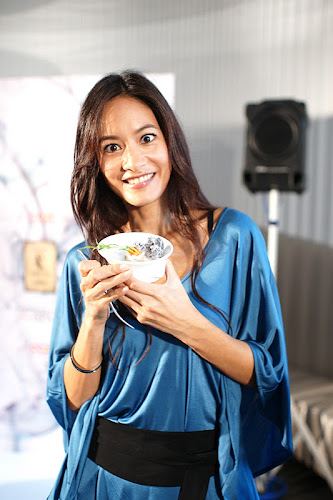 So Grilled Squid was paired with the Freeze Dried Ink Sauce which kind of melted in your mouth.


Digestive liquors Meigas Fóra to be paired with dessert. 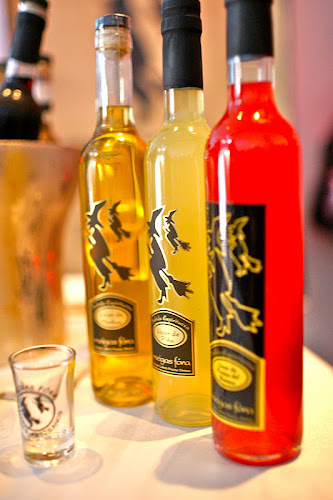 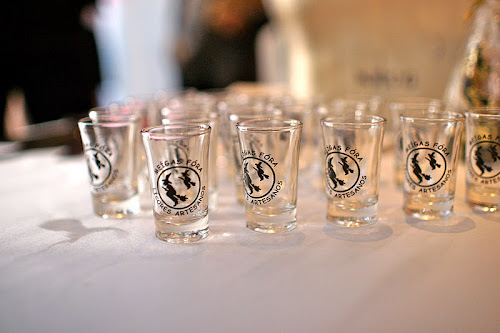 My tastebuds were unsure of what to do with Foie Gras "Stone" with Smoked Almonds, sort of like a foie gras pate ice cream. Rich, creamy, savory and cold. 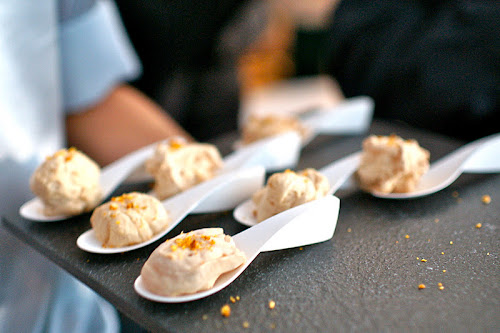 Coated with a edible metallic coating, the Chocolate Screw and Nut looks a lot like the real thing. 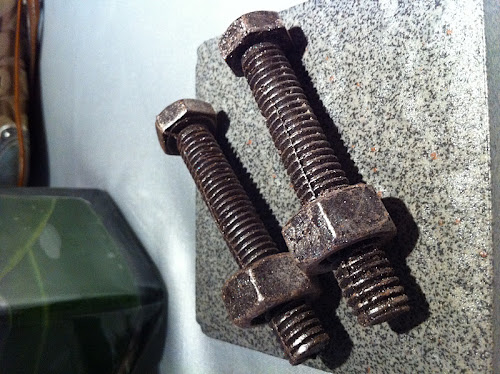 Chef Daniel Negreira's DN Innovacion has been open for a year and I've been wanting to try it since it opened, but haven't had the chance. I was definitely encouraged by the delicious bites I had at last week's TAS Fair- Galician styled octopus with "pimentón", a sweet and smoky Spanish paprika, and mushroom croquettes to try out Chef Daniel's creative menus after this international Michelin star chef pop-up is over. There's no where else you'd find Spanish molecular gastromy in Taipei!
Posted by joanh at 11:01 AM

Email ThisBlogThis!Share to TwitterShare to FacebookShare to Pinterest
Labels: CLOSED, PR/event (this meal was free), spanish

BTW i love that freaky picture of Janet