Today I headed to AALEJA again, getting a seat right before the busy lunch hour. Good thing too, especially as the restaurant started to fill its tables, it was hard to get service, and it was hard to wave someone down for more water, a forgotten bowl of basmati rice and the bill. Though the two waiters were friendly, it was too understaffed for the six to eight tables that were there when we left. STRIKE ONE: not enough servers during lunch hour

The Tandoori Chicken (half order) was disappointing as the pieces seemed bony rather than meaty. I felt a little this way last time, though I thought it was because I got the leftover pieces from a group of eaters. However, with a half order, we got a bony thigh, a medium meaty breast, and a tiny leg upon the hot plate of onions and tomato. The flavor was still tangy and tender, but just expected more bites out of the order, especially in comparison to experiences at other Indian restaurants. STRIKE TWO: more bones than meat from the Tandoori Chicken

STRIKE THREE: Another disappointment this day- the Naan! It was dense and heavy, like pita bread rather than fluffy crispy naan I've come to love. Did I order wrong, I thought to myself? I asked for original flavor in chinese, but this was not like the Naan I had before. I even compared it to the picture from the last visit. As the servers were busy attending to other customers and we were ready to leave, I didn't bring it up to the waiters.

The Mutton Korma and potato side we ordered were still very good. The rice was a good accompaniment, though more like sticky rice than basmati rice, maybe to accomodate to the Taiwanese tastes. As I heard other customers order the lunch special set (which I didn't know about since I didn't see it on the menu and the server didn't mention it), I was a little curious- but it definitely on the light side with one meat dish and rice, naan, soup, fruit, drink (though I heard there are different levels of lunch sets). Our lunch for two ran about NT$1210 (with service fee), as my friend also ordered soup and a strawberry lassi. I will have to try the other Indian restaurants before returning to AALEJA to compare, but for now I'm revising my "strongly recommend" to a neutral recommend because of their three strikes today.

I really enjoy Indian food, and I think that I've had some of the best Indian food in Asia- Singapore, Hong Kong and now Taipei. There are actually quite a few Indian restaurants in Taipei to choose from, but sometimes that becomes more confusing- which one is "authentic" and which ones cater too much to the Taiwanese tastebuds?

On this occassion, I was actually searching most of the day to choose one Indian restaurant for a group family excursion and set with the near impossible task of finding one that might have a private room- as they do in many Chinese restaurants. Calls placed to Tandoor, Ali Baba and New Delhi asking if they had a private room resulted in varied interesting responses (one "no" and then hang up, one confused no and one polite no.) After scouring various internet boards, quite a few TaiwanHo! forum posters recommend Aaleja. To my surprise, they actually had a private room available (and were friendlier than some of the other restaurants on the phone I had called)!

After a few twists and turns, you will find the entrance, which at night is light by a neon sign and a large lit entrance collage of food photos. 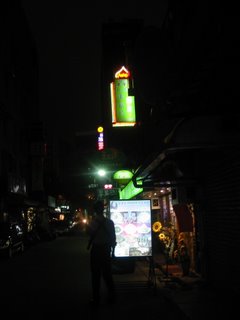 Each of the curries were had distinct and complimenting flavors to another, and the meats were stewed to tenderness . 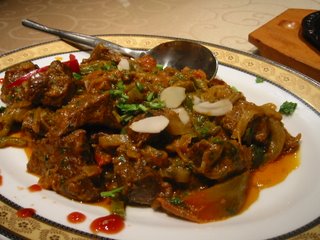 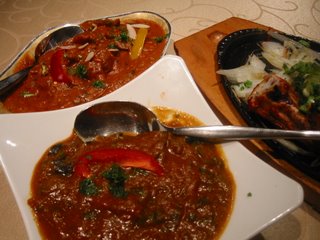 Our full order of chicken tandoori was split into two hot plates. The chicken was tender and flavorful. 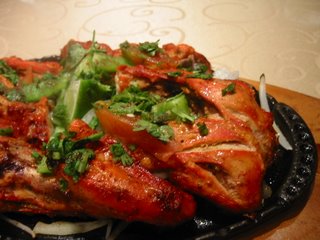 The naan was soft and crispy. 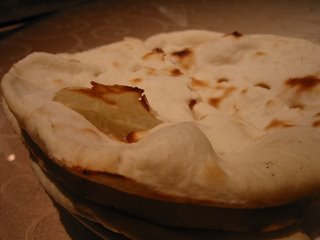 The samosas was the only disappointment because the skins were slightly soggy and not crispy. 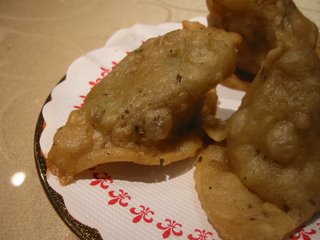 Our table of seven people finished everything!

The private room had very cool mural along one side of the wall and a tv in the other corner that played Bollywood films, perhaps to help transport you to India. The restaurant area was crowded and boisterous. The service was friendly and accomodating. The food took a little while to be served, but once the food came, it all came fairly quickly. I'd like to return to try their weekend brunch buffet, mmmmm.
Posted by joanh at 5:17 PM

Email ThisBlogThis!Share to TwitterShare to FacebookShare to Pinterest
Labels: $$ depends on what you eat, area- Da An, buffet, indian, kid friendly, taiwan

Interesting! I didn't know you were into Indian food that much. Too bad that the revisit didn't play out as well as the first time. Maybe third's a charm? :)

hi
i am an indian girl in taipe and since u are so much into indian cuisine with sincerity i wd suggest u try the alibaba restaurant. the food and service are better than others in the genre. a la'carte is good but u can also go for the weekend buffet that has great variety of veg and non veg dishes. visit it next time and write in ur comments. keep smiling and eating:-)

anonymous: hi! Thanks for reading my blog and making the suggestion. I will definitely put Ali Baba on my list to try next! Can't wait..

I think you very like Aaleja,
you want go to Aaleja again....again...
at least third times.
(who will go second time
for no good food)
you angry beacuse you hope they become better.
I like Aaleja too.
I always bring my important customers to Aaleja.

zoe: You're right, i wouldn't have gone a second time if I didn't like it the first time. The problem is trying to get someone to go with me again. I'd give it another try- I'm glad that you recommend it

Hi, Awesome blog! Thanks so much!

Last night, 6/17/07 we went to AALEJA. It was some of the worst Indian food ever! We ordered butter nan, garlic nan, full order of tandori chicken, mutton Korma and prawns something... The bread tasted stale and had no color and was flat. No golden brown edges or golden buttery flavor. The chicken came and looked like someone's leftovers. It was overcooked, dry, and actually tasted like old, old leftovers! The sauce for the mutton and the prawns were tasted good. However, the prawns were not fresh. The first prawn I got had black liquid oozing out of it's head. The next piece I got tasted powdery and had the wrong texture. Sorry. I don't want anyone else going there with high expectations like I did. :(

cjc: hi! Thanks for your feedback. Yeah, I don't know if Aaleja has changed chefs or management or something since the first time I've been there, but it's gotten progressively worse.. see my buffet review for Aaleja- it was AWFUL! Next time I will be trying Cafe India or Spice Shop I think.

I crazy for Aaleja's food
When I saw cjc's message,
I very worry. last friday,
we went to Aaleja.
thanks god! food still delicious!
who will stupid pay for what cjc said.
maybe cjc come from other competitive restaurant.
Aaleja have very big problem....
have too much customers...
everyone must waiting.
they should be have another shop in taipei.

Naan is not always crispy and fluffy - dense, pita-like naan is actually quite common in India (I happen to prefer it). There are a million variations on naan in India (it's a big country after all), so no, it probably wasn't a mistake!

I used to eat there a lot but haven't spent much time in Taipei recently. I always went to the lunch buffet on the weekends. Loved the naan and variety of foods.

writer: i do want to go back and try it out again and see how it is these days

jenna: i know there are other flatbreads that aren't fluffy, but i thought it was strange because i had a strong memory that the naan that i ate from the first time i went was different from the second.

katrina: thanks for leaving a comment! i'm glad you had a good experience with their buffet