I am always drooling over food- whether it's meals made by a TV chef or a photo on a food blog- I think it's true that you eat with your eyes first. So from the minute I saw a picture of the "Fried rock lobster glazed in caramel with Japanese mountain pepper" in the Weekend section of Taiwan News last week (Sept 22, 2006) and the accompanying article about the "zen-like" beautifully presented and delicious Kaiseki set course, I started daydreaming about eating there. 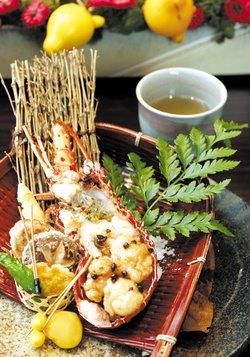 It was also perfect for this month's Dine and Dish, LIKE A VIRGIN, where I would be trying new things all around- a new restaurant and my first food blog event ever, hosted by the Delicious Life, which happens to be one of the very first food blogs I've ever read and started me into a spiral of must-read list of daily drool-worthy blogs.

Imagining the morsels of LOBSTER! glazed in CARAMEL! doing a happy dance on my tastebuds kept a smile on my face all the way to the restaurant when I finally made my way there. I called in for a same day with a reservation for 5, and was actually even able to get a private room in the left side of the restaurant once we were there since it was on a slower weeknight. The entrance on the right included a giant wall size fishtank lit an unnatural shade of bright blue and the decor is elegant modern Japanese, even with rock gardens and mini-fountains on the way to the restrooms.

We sat down with the menus and I started to get nervous.. there were a few set courses on the menu, but the Kaiseki course (NT$3000 ~ US$100) reviewed in the paper had a Tempura Red Snapper instead of Rock Lobster. Even the slightly more expensive Chef's set menu (~NT$3300) didn't have it. A million thoughts raced through my mind- (1) They changed the set menu already (2) I only read the article a week ago! (3) Maybe they ran out of rock lobster? (4) Maybe if we ask really nicely they'll make it for us? (5) Maybe it's on a even more special menu onesheet that the waitress forgot to give us? (6) Maybe the chef changes the menu everyday?? (7) Why the heck did the paper focus on the rock lobster if it wasn't even going to be here!!!

We asked the waitress about it and after some back and forth with her and the kitchen, she said that the only thing was the lobster in the Autumn menu (pointing to a placard on the table) but the shell was fried, but not the lobster. If I could do it again, I would have said, okay, let's order that, maybe it's the same thing. But in the moment, I pictured morsels of rock lobster tempura and didn't want something that wasn't what I drooled over. Now that I have the photo in front of me, I think that was what it was and I'm super sad that I didn't get it.

Instead, I ended up making my own quasi-set course by ordering things that appealed to me off the menu to share with the table, and there were quite a few things. Pecan and Soy Paper Crusted Fried Oysters, Mushroom and Asaparagus Salad, Dragon Roll (Tempura Prawn and Avocado), Eel and avocado, fish chin, and Mushroom soup. I will say that the pictures don't capture the food and ambiance with justice, as it was very dark so I had to use my flash and when I didn't, it's harder to see with the diim lighting. 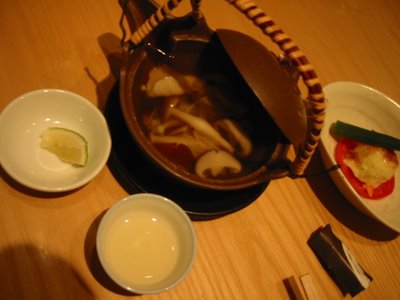 The asparagus mushroom salad: I wished the tangy, sweet dressing that came on the mini-bed of lettuce was on the rest of the salad, since the mushrooms and asapargus tasted sort of plain in comparison. Even as a mushroom lover, I felt tasted a bit slimy. I also didn't know what to do with the accompanying piece of bread- it was stale and hard as a rock. I don't know what the orange crunchy shreds on top were, but they gave the salad an overall nice bite. 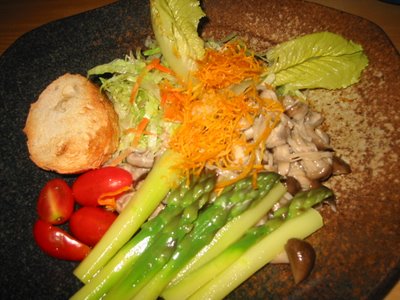 The pecan crusted oysters: These were a lot more dense than I expected, although I guess I should have expected the slivers of pecans to make the deep fried dish a lot heavier. I like my deep fried oysters big, like these were and I haven't had them in awhile, so I was excited. The pecan and soy paper add an interesting texture to the soft body of the oyster, they gave each person a tonkatsu dipping sauce that was not bad. 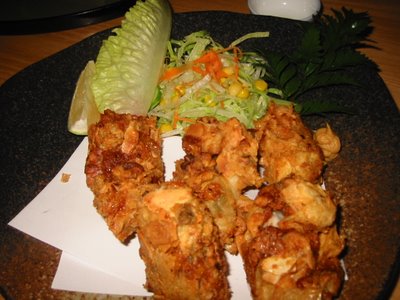 the Rolls: Both rolls were okay, although, the avocado was barely noticeable in both. I was also very surprised to see the prawn/avocado roll was entirely fried, rather than just the prawns. Not only deep fried, but with onions- again, it made the dinner a lot heavier/greasier than I was expecting. 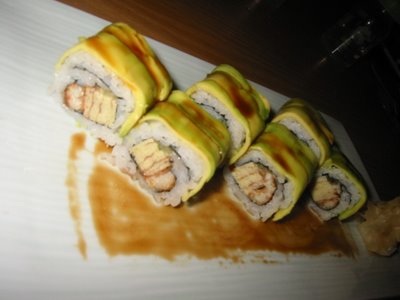 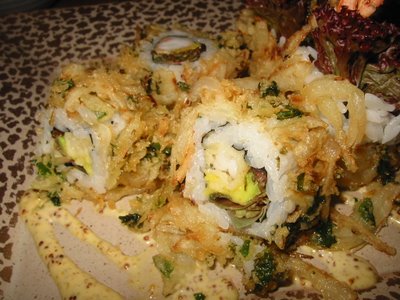 Several people ordered the set menu- a tempura set menu, the beef set menu and a vegetarian set menu. Here are a couple glimpses of what I saw. I also didn't take a picture of the fish chin- though it was a lot of meat, I found it slightly fishier than I would like and not as crispy. 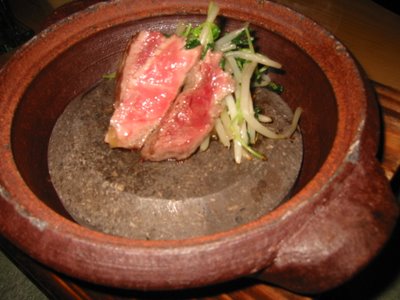 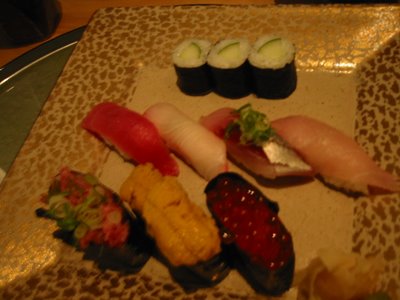 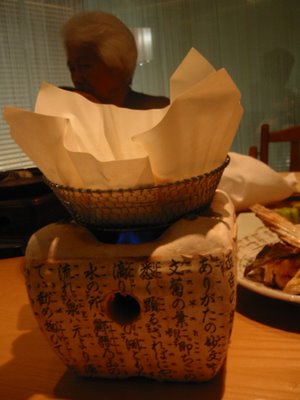 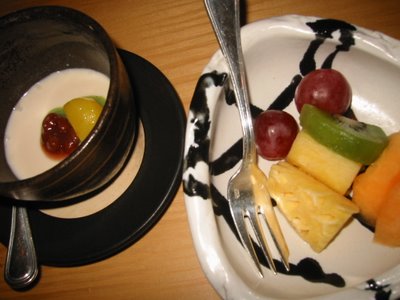 My overall impressions- it's definitely an upscale restaurant with upscale prices to match, but I think that you can get just as good food for half the price at other upscale Japanese restaurants such as Sumie. Like any relationship, I think I end up comparing all my experiences to your first- which in my case is Sumie, which has various set courses, but one at NT$1500 is mouthwatering and filling and so beautifully presented. I wasn't blown away by the food that I had at Suntory, and maybe it's because I didn't order the chef's special set menu, but I don't think that you should have to order the most expensive thing on the menu to be blown away. I liked it better than the often stuffy Peony Japanese restaurant, but I didn't get what I hoped for when I read the review in the paper. Sometimes the fantasy is better than the reality, but you don't know until you try it.