Does anyone else remember when they used to make fried apple pie in the US? It came in a funky shaped green cardboard box, with an warning in small print about how hot the filling would be on the side. The crispy fried goodness of a crust, the sticky sweet sugary filling and the bite-sized chunks of "baked" apple? It was probably one of my favorite desserts as a kid and suddenly McDonalds was health conscious and switched to baked apple pies with a stiffer, drier crust.

If you do remember and ever have a craving for it- they actually still make fried apple pie (NT$20) in Taiwan!! I think it was almost ten years ago we first started re-appreciating it in Taipei, and thankfully, it hasn't disappeared here like it has in the US. 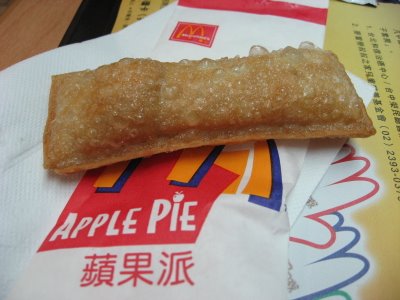 It's not the healthiest thing in the world, but who eats at McD's to be healthy? Although the portion seems much smaller and there's less apple in the filling, it's just enough of taste to make a good snack on the go. If you need something salty after eating something sweet, you can try their new steak fries. They are over crispy and fatter than their well-known fries, but don't provide the same satisfactory salty crunchy oomph. Stick to the original for the fries. 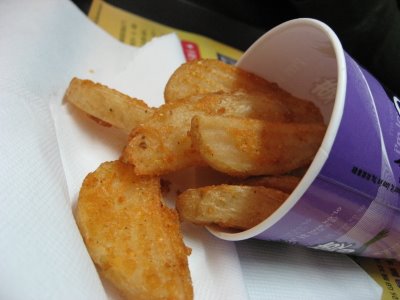 As for the rest, everything is pretty standardized compared to other McDonald's I've tasted in other parts of the world and on occassion, I like to eat a Sausage egg biscuit and hotcakes and hash browns. Mmm. I heard tha they might start serving breakfast all day at some McD's in the US.
Posted by joanh at 3:01 PM

yum.. i miss fried apple pies in the states. maybe it's better that they're not here cuz i'd be eating them every day!

maybe next time we should try it with ice cream!

another plus about taiwan mcdonalds.. they wrap their food in hello kitty paper!