hours: afternoon to early AM


It's so great having relatives in town because it gives me an excuse to go out to my favorite touristy spots, and sometimes even go somewhere new. I had never been to the Raohe Street Night Market, but my mom says it is a favorite of my dad and grandparents. Heading into the entrance, we almost got lost in a group of Japanese tourists. 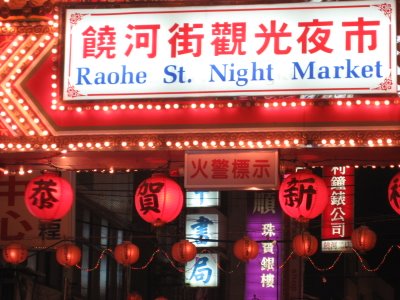 We went after dinner around 830pm or so on a Saturday night and it was crowded, but not like Shih Lin night market where you barely have room to move.

I didn't get the chance to try it- but they had something I'd never seen before- a super long curly chip, basically a spiral carved out of a potato and deep fried. They place it on a stick for you to eat and season it with your choice of seasoned salt. 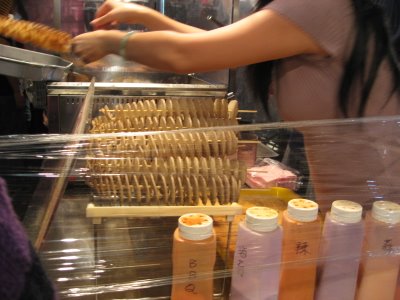 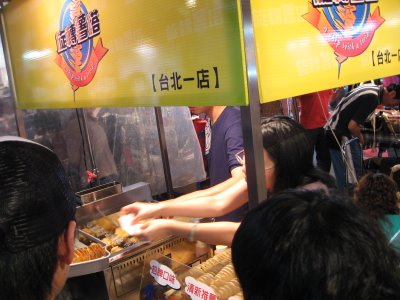 I did get to try a lamb wrap (NT$80) from the Allah Din, after spotting their grilled kabobs, which was fairly close to the entrance. The guy making the kabobs called out to the crowds in Chinese to try it and spoke a little English as well. 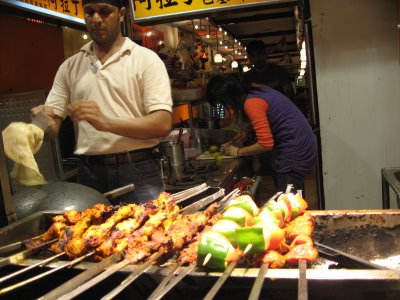 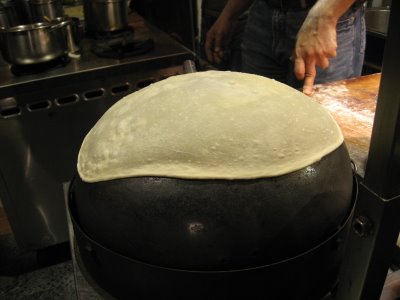 They "baked" the fresh paratha (Indian flatbread) and you could choose lamb, beef or pork for your filling. The signs were only in Chinese and I ordered lamb, thinking I'd get the kabob. To my surprise, I got minced lamb to which I tried to tell them that I wanted the kabob meat. They said that what they were giving me was better and that I didn't order the kabob, I ordered the wrap, even though I saw them wrapping a chicken kabob meat in the wrap for someone else. I ended up just deciding to try it. 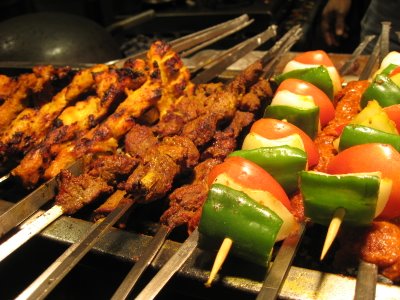 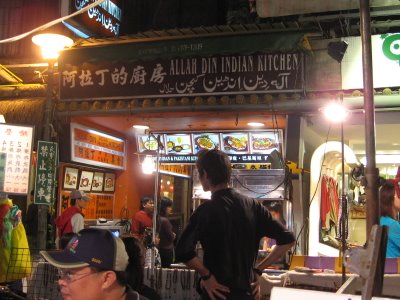 It was not bad- it was warm and spicy. The paratha (Indian flatbread) was chewier than naan which is usually crispy and chewy. They added pickled carrots and cucumbers which gave it a nice crunch and added the green sauce which gave it some heat. I would love to try the tikka chicken next time. There's also seating in the back, if you want to sit down and order a plate. I've never seen this in the states, but I've seen it at the Shih Lin night market as well (with English signs). The guy at Shih Lin also has more room to toss up his paratha bread (kind of like pizza throwing) which usually draws a crowd. 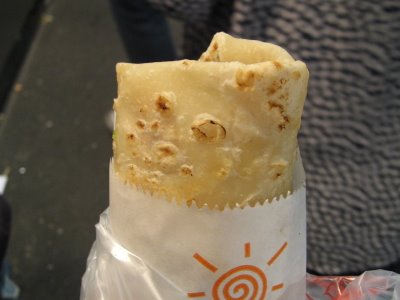 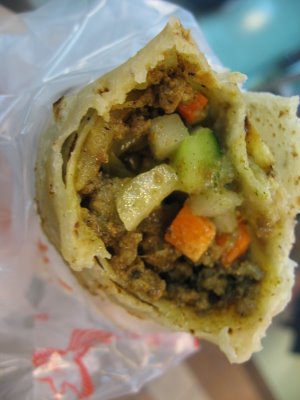 I also shared some shaved ice (NT$50). If you've never had shaved ice, you can usually choose up to four toppings from an assortment of toppings or just choose one. My sister liked the powdery texture of the ice, sort of like eating fresh fallen snow. 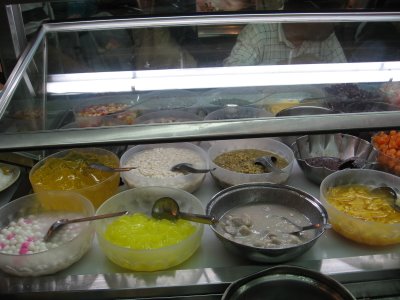 Although the ice wasn't enough for us, the owners gave us more shaved ice when we asked for it without any trouble. One of the women who worked there was very pregnant and it turned out she was five days away from her due date. 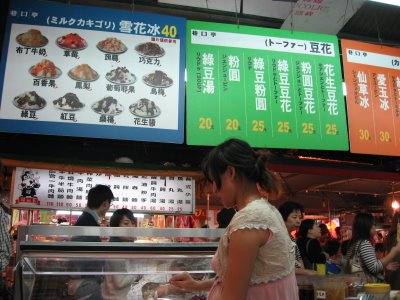 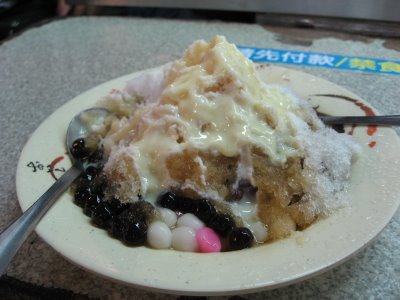 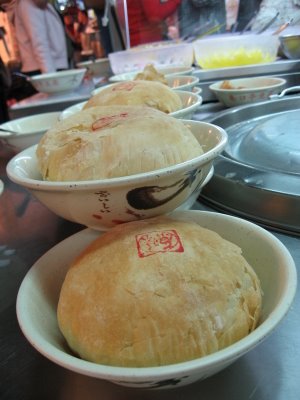 does anyone know what this is? salty or sweet?

If you don't eat your shaved ice fast enough, especially in hot weather, it will melt into a puddle like this. 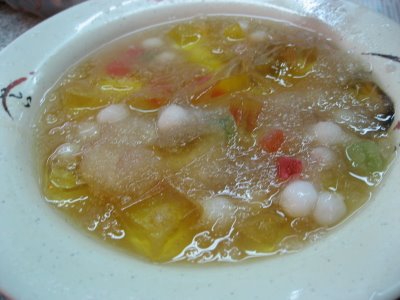 Once you walk into Raohe night market, you basically walk down a LONG row of eateries and shops until you exit the other side. There's also quite a few NT$10 shops so you could end up with a bag full of things before you leave. Come with an empty stomach and you can hop around the different stands to find your spot to sit among the crowds. 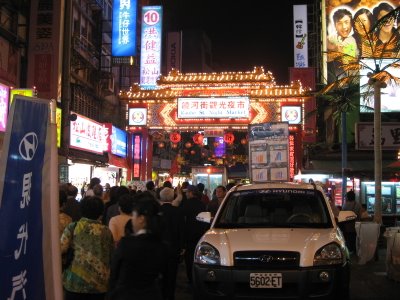 Hi Joanh, thanks for posting this. I've been wanting to go to Taiwan to eat at the nightmarkets. I'll be in HK this x'mas eating at nightmarkets too. But I know HK doesn't compare to Taiwan's.

eatdrinknbmerry- yeah I never know where to go for night markets in HK! if you find out, please let us know on your blog. and if you stop by taipei, let me know!

chubbypanda- it was a rare treat for me too! :) save up your money to come do your own tour and i'll come with.

Joanh, I've only been to stalls in Tsim Sha Tsui district. In Mongkok, there's also a few stalls but not that great. But when it comes to wonton noodles, HK is flawless. I am counting down the days...

mm.. shaved ice is my favorite. the evaporated milk is a definite must!! i liked the shaved ice here better than shih lin. and the indian burrito was good - too spicy for me (and too many vegetables.. hahaha)

Hehe, I adore Raohe NM too! The atmosphere is different to Shilin MN...

If you haven't yet, you must try the 雪在燒...three scoops of fruit/red bean 叭噗 (Taiwanese gelati) + shaved peanut candy and cilantro (optional) wrapped in a thin, just-made crepe. It's amazingly good.

Thanks for the recommendation, I wanted to try that Allah Ding stall last time. I will definitely try next time.

There's also a lady at the temple end who sells really cute and well-crafted traditional jade/bead decorative dingley things that go on your mobile or keyrings or whatever you like. She says she's going to stop making them soon because the work is very hard so...

amy: hi! thanks for commenting! i will have to try the crepes. and yes the atmosphere IS totally different than Shih Lin. you'll have to let me know if you liked the allah din next time.

Rao He is also famous for the Hu Jiao Bing, pepper pork roasted bun. It's a few notches better than the Shihlin location. It's near the end of the market.

at raohe street market, have you guys tried the sparerib herbal soup?
its dark colored but tastes yummy.
comes with spare ribs. rice is a separate order

Went to the Allah Ding stall last night. Although the wrap looks good, I sat down and ordered a plate. It was terrible. The curry was a pot of oil and the nan was like more like white bread than flat bread. I though nan is not suppose to fluff, but this was more like dipping bread. I love Indian food and this was a definite miss.

hi~First time drop by your blog ^^ I am going taipei with another 3 friends of mine in JUly. May I know which night market (or shopping mall) sells cheapest one-piece-dress? like about or below 300NT.