Monday-Saturday 6pm~2am
Kitchen closes at 12am 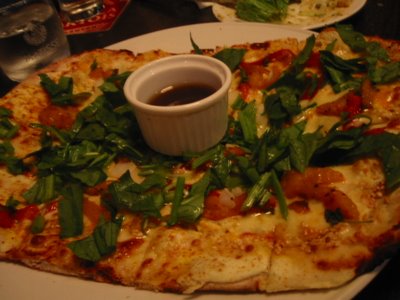 I had been hearing a lot about Citizen Cain for awhile before we found the time to go- maybe it was their ads in English language papers, or the mentions on other blogs or forums or their "Mexi-cain" night on Wednesdays. I even checked out their website and menu to see what looked good. Their menu focuses mainly on pastas and pizza, with a few salads, appetizers, main dishes and sides- as well as full bar of drinks, but no desserts. Some of the features are very unique from other American or Western eateries in Taipei- with items like hummus.

When I finally made it there, it was almost a last minute decision to go. My friend and I headed over first, and then called over some other friends to join us later. 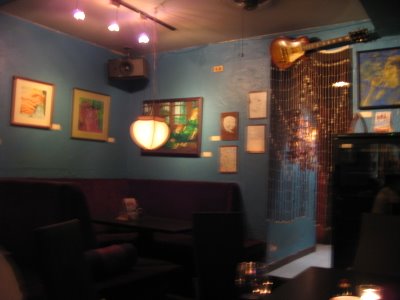 We walked into a candlelit lounge-like atmosphere, with purple velvet-like sofa seating along the moody turquoise blue walls. There were both locals and foreigners, though probably more foreigners than I've seen at other places. The manager came with the menus and was quite friendly, making suggestions on what to order. We ended up taking her advice and tried the stuffed chicken (NT$370) which was stuffed with pesto and feta cheese and served with tumeric mashed potatoes and sauteed spinach. It was a lot going on on one plate- sauces, paprika, tumeric, feta... the chicken was cut in half with the feta in the middle rather than "stuffed" as stated on the menu. The flavors were strong, bordering on being too salty. 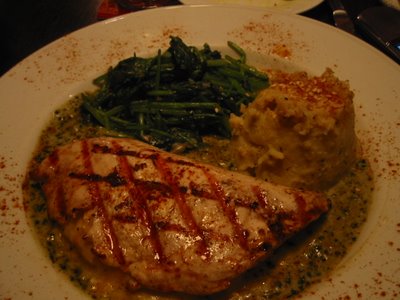 With only two salads to choose from, we initially ordered the Cain's Garden salad (NT$250), which has sliced apples slivers, grilled onions, spinach, sundried tomatoes, and a warm vinagrette, and later added the caesar salad to share. I felt the vinagrette was a bit oily and the salad wasn't really blended as a cohesive taste. The dressing for the Caesar was very lemony. 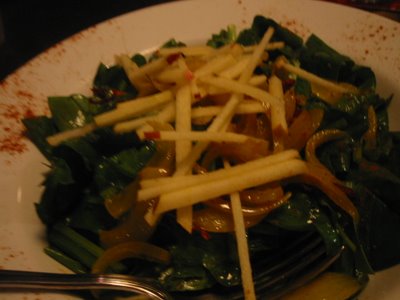 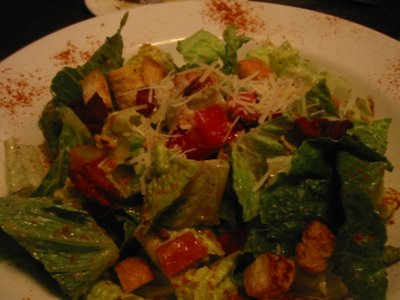 I was going to order just the Hummus, but the manager strongly suggested we get the Middle Eastern Platter (NT$290) instead which also included Hummus, baba ghanoush (roasted eggplant yogurt spread) and falafel served with olives, fresh tomatoes,tahini and pita bread. It was pretty addictive, though we needed to order another side of pita bread (NT$50) to finish all the dip. The falafel was also hot and crispy, straight out of the fryer. 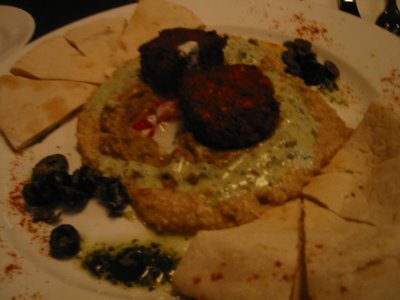 The pizzas (NT$220-320) are quite tasty as well, with an assortment of different toppings. It's more oblong than round and has sesame seeds sprinkled around the crust. They are quite satisfying and disappeared fast. The toscana pizza comes with spinach, but it's chopped and topped onto the pizza, not baked in. We also added shitake mushroom to ours. 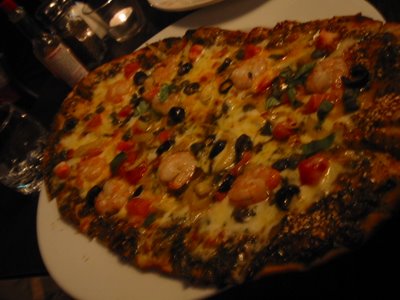 Prices can be very affordable, especially if you go when they feature specials on different nights- Monday is two pizzas/pastas for NT$299, Tuesday is any main dish for NT$199, Wednesday's Mexican food for NT$199, Thursday features burgers from around the world, Friday NT$100 beer specials and Mexican night again, and Sunday with NT$199 set menu NY style brunch.

While the food and the presentation is more homemade than polished, taste wise and for the price, it's definitely worth a try. It's also a great late night option for a late night snack, after a movie or a semi-romantic casual date, as they are open until 2am, with last orders placed at 12am midnight. While the bar has an extensive list of cocktails, spirits and beers, Citizen Cain doesn't serve desserts, so don't go expecting to fulfill your sweet tooth. 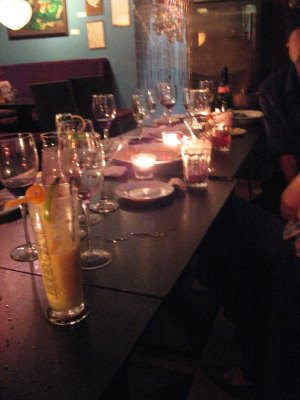 If I went again, I'd probably stick to the appetizers and the pizza. Another appetizer they have is the hard to find Canadian snack, poutine, which is mushroom gravy, cheddar and mozzarella cheese over french fries- I suppose a Canadian version of American chili cheese fries. I'm looking forward to trying their Mexican food and their brunch! Anyone else have any favorite dishes to recommend?

You're amazing. You've got me wanting to eat Western food in Taiwan. =b

can't eat chinese food ALL the time! btw, who is rosebud, or is that some new OC slang i don't know?

you definately have to go back for the poutine. It is the best I've ever had and I'm from Canada.

tobi: wow! okay, i definitely will and will let you know.. what else do you recommend there?

Orson Welles' character in the movie Citizen Kane uttered the word "Rosebud" as he died. They spent the whole movie trying figure out what that meant....

Have you been back lately? Thinking of trying their ribs since Tony Roma's is closed.

anonymous: ohhhh.. goes to show that I have a lot of movies to catch up on. : )

I haven't been back in awhile. Heard they revamped as well.. due for a visit soon.

The pizza looks and sounded good on your blog so I invited some of my Taiwanese friends to eat at Citizen Cain with me. They called for a reservation and found out that they have not been in business for a several months now. You should update your blog, labeling CLOSED.