breakfast/american: i strongly recommend THE DINER 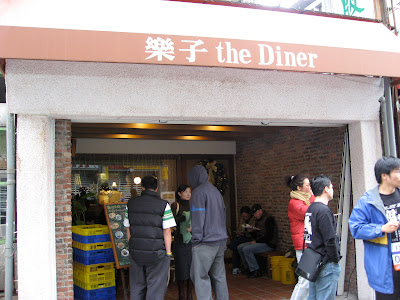 the outside- look for this storefront

As we approached the restaurant, it was not yet open at 7 minutes before 10am, and a few other people were waiting already. My friend who had spotted THE DINER awhile ago said that the last time he passed by, it was packed with quite a long wait, so he was excited that we had timed it just right to get a prime seat on this busy Sunday morning. The inside is cozy and more cafe-like than diner-ish, with simple wooden furniture and various lamps hanging down above the tables. It was decorated for the holiday season with hand-drawn cards and a "merry kissmas" image of two snowmen kissing above the counter/kitchen area. 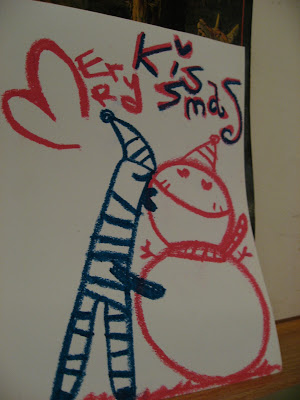 one of the very cute hand drawn cards 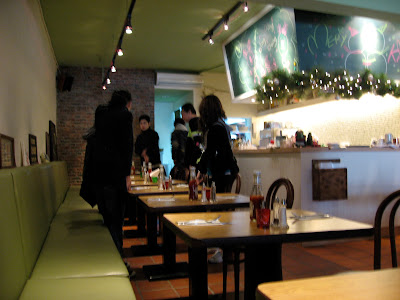 We sat down around 10AM and got our own menus to order and the place quickly filled up. The forty or so seats was completely full by 1021AM. 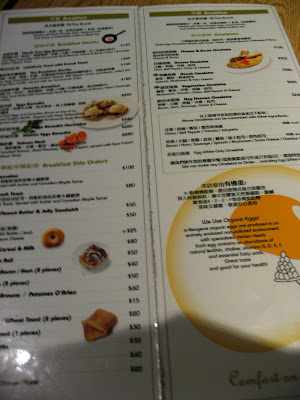 While the menu features such American staples such as meatloaf and country fried steak (served daily after 11:30AM), the reason people mostly come is for their all day brunch options like omelettes, pancakes, french toast, eggs benedict, eggs florentine and breakfast burrito. I ended up getting the eggs benedict (probably the first time I've had them in Taiwan) and most of the other people got omelettes. The breakfasts come with choice of hash browns or o'brien potatoes as well as a small cup of OJ, and bottomless cup of coffee or tea and a side of fruit (in this case, 1 strawberry with condensed milk on it). The omelettes also come with a slice of bread cut into triangle halves. 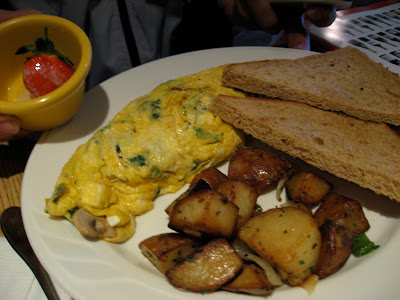 We lingered over conversation, our hot drinks and the morning paper, and our food trickled in a few at a time. The omelettes seemed to come out a lot faster than the eggs benedicts, which were the last to come. One of our eggs benedicts came so far after all of us were done, we thought maybe the kitchen forgot about it and a couple people decided to order more to eat.

Overall, the food was pretty good. They only use organic eggs and the omelettes were fluffy, flavorful and full of the ingredients. It didn't taste or look processed like some omelettes sometimes do. The o'brien potatoes were also very tasty- probably pan fried with a lot of butter. 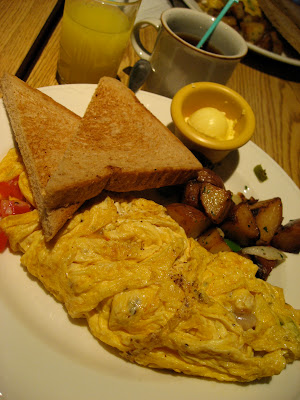 My eggs benedict looked pretty delicious by the time they came. Fluffy poached eggs resting atop the english muffins, with the sunny hollandaise sauce spooned over it. It was very good, and just a few notes from being awesome - (1) the hollandaise sauce was too runny/watery than I prefer and there was too much- it made the muffins soggy, which I don't like, (2) the muffins didn't seem toasted- they were soft and mushy rather than the crispy soft texture of the toasted variety that I prefer, (3) it needed few sprinkles of pepper and salt. The side of potatoes though were a home run- I probably could have eaten a whole plate of them if I wasn't careful- they were tasty, bite sized and had some herby flavor that made them unlike any breakfast potatoes I've had before. 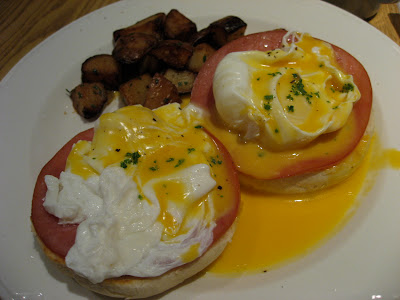 I didn't get to taste the breakfast burrito or the pancakes, but everyone's plates were emptied pretty quickly. The pancakes looked golden brown and fresh off the griddle, unlike the dry, hard pancakes from NY Bagel. 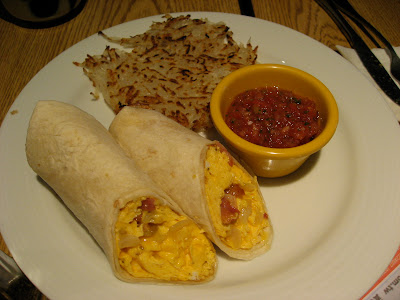 breakfast burrito with hash browns and side of salsa 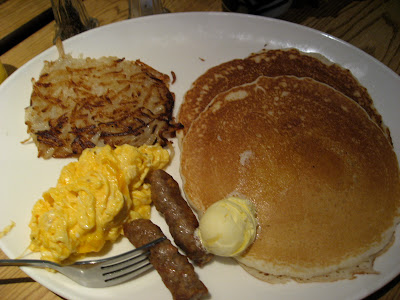 The next time I come, I will probably try the pancakes or french toast, or get an omelette. I also spotted on the lunch menu a pastrami sandwich that made me very tempted to order one for lunch later that day. The authenticity of their American-style breakfasts bode very well for a potential authentic pastrami sandwich- and how great would that be to be able to eat a pastrami sandwich whenever you wanted in Taipei? (hahah.. you see I've been here too long!)

Everything on the menu seemed appetizing and very affordable, and it also featured kids options for only NT$100 each. There's also a parking lot available at the corner of Rui An St and He Ping E Rd.

I almost didn't want to write about the Diner since it's one of those brunch places that have a wait-time for those in "the know" in the Shida area, and I didn't want to let the secret out so that the wait would be even longer the next time we went, but it's definitely too good of a find not to share. If you're going to wait on the weekend for NY Bagel, you might as well give this tastier, fresher, more authentic and faster option a try- but if you go, let me know what you thought!

Oh man, i just looked at this post and am now seriously craving some eggs and pancakes. I'll definitely try this place when i go to taiwan and will inevitably start to crave american food.

Those lip balm conspiracists are truly crazy. Go to http://www.kevdo.com/lipbalm/ if you want a good laugh. I thought it was a joke when i first saw it!

thanks for the comment and visit! if you try it or any of the other places here, let me know..

re: the chapstick: definitely craziness

Good call, hungry girl - my wife and i just checked out this place last week. got there right before their last call at 10:00 pm. Their burgers are also quite good, and much more affordable than, say, chili's. And while the chocolate milkshake was not quite "just like home", it was better than any other we've had here thus far.

luke: thanks for the feedback! i will definitely try out their non-breakfast meals another time then.. like i said, the pastrami sandwich was calling me! or maybe the meatloaf.. mmmm. prices are definitely more affordable than chili's!

Taipei sure has changed since I was last there. I couldn't even imagine getting this type of food.

chubbypanda: yeah a lot has changed in the last five years or so, not to mention however long since you've been here!!

i think people who visit though, want to eat taiwanese/chinese food, so they wouldn't even look for food like this if they didn't live here for an extended period of time.

excellent recommendation. Went there for dinner the night before. I arrived around 6:00PM. The place was half full so I did not have trouble getting a table. For the food, I was contemplating between Philly steak sandwich and a burger. Since I have been craving for a good burger, I ordered the mushroom and cheese burger. It did not disappoint me. The meat was juicy and still a little pink in the middle. The frys was perfect, crispy outside and fluffy inside. The portion was just right, I was full after I ate the whole plate. I will go back and be sure to try the steak sandwich.

ron wu: awesome! thanks for the feedback! i will definitely have to go back and try the pastrami sandwich then!

The diner. I went there in June '08. It's the best Western Style Breakfast I have had in Taipei. I had the salmon benedict. Overall, it's a good place. The only negative is the egg yokes were between soft boil to the hard boil. The Hollandaise sauce wasn't very good. Overall, I would rate the experience: food - average, ambiance - average. Overall, I would recommend going there. There aren't a lot of options in Taipei.

is the shop still there? coz the website is no longer valid..

The diner is a very nice restaurant because regardless who you are with or what you are eating, it always feels like eating at home. It's a very cozy place.

went there last year and the food is definitely good. But I was somewhat dissapointed with the attitude of the door staff. We booked in advance for a specific time and then when we got there we were made to wait for over 30mins. These things happen sometimes but it was the arrogant attitude of the doorman that really pissed me off. He was such an arrogant and dismissive toad. We ended up leaving as he made us feel like dirt on the bottom of his shoe.

@luke- thanks for your comment and sharing your experience.: that's annoying to wait and have to deal with attitude even before your meal. I've had some experiences like that, though not at the Diner.