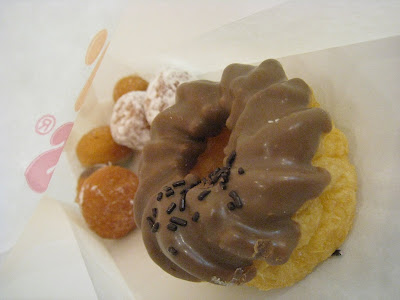 Kid friendliness: Self serve donuts, so kids can pick their own. Cafe style seating to eat the donuts right away!

Before Dunkin Donuts hit Taipei, I was able to nosh on some in Pusan, Korea where the American brand donut shop is also self serve for pleasant and take your time browsing. I was pretty happy with the experience, thinking if they can bring it to Korea, why not Taipei?

A short year later, DD hits Taipei, but has the American donut successfully translated over here where Mister Donut seems to be the reigning king of hole-y desserts? 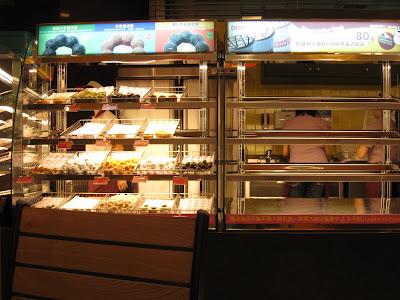 Well... unfortunately, no. At least not from my first impressions from a late afternoon gathering of Munckins and a mocha frosted cruller. The munchkins were stale and made me yearn for the light chewiness of Mister Donut's mochi ring donuts, which the local DD has also presented its own variation. I've heard mixed things about the Dunkin Donuts debut in Taipei on various expat boards- supposedly the tastes were spot on in the beginning and then slowly adjusted (ruined) to local tastes. What's the point of having an American brand if you are going to make it taste like anything else you can get here? 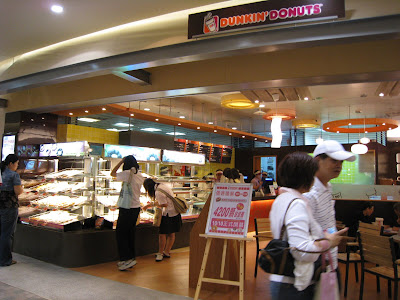 Maybe the donuts just don't age well over the day or aren't the freshest in that particular location. Maybe my childhood cravings for Munchkins just built my expectations too high for what I wanted to taste. Maybe I'll give it another shot- another location, earlier in the day. Until then, you might spot me buying a mochi ring if there's no line at Mister Donuts.

If you happen to want to try it out yourself, the donuts average about NT$20-35 each, with hot and cold drinks and sandwiches also available.

PS- Again, I know it's a lot of work- but I still have a problem with international companies who do not put both English and Chinese on their info pamphlets. How am I supposed to find these other locations if I don't have a friend who can translate for me?

other locations (to come after I figure it out!):
Hsi Men Ding
Nan Jing East Road
Posted by joanh at 4:11 PM

hungry girl: the only DD I've been to in Taipei is the MinQuan W. Rd. branch (to the right of the MRT station, where, not coincidentally, Mr. Donut has decided to open a new branch). Actually I rather like it, though I haven't tried the particular donuts you had.

My favorites are the jelly-filled and cream-filled donuts (much better than in the States, in my opinion, because there's a higher donut to filling ratio). And if you want something more along the lines of American-level sweetness, try the glazed chocolate or the glazed bowties or the glazed apple fritters (basically anything that's glazed).

Stay away from all the copycat "pon de ring" style donuts. You're much better off sticking to Mr. Donut for those.

It took me months to check out DD after it had moved into town.

I was totally dumdstruck not at the donuts or coffee drinks (which don't really taste any different to me than their american counterparts) but at the interior design and layout. They have leather couches and flat screen TVs!

Therefore, I was totally shocked when I walked into their shop on Nanjing East Road, selected a chocolate glazed donut and plopped onto a very comfy, plush seat.

To be honest, I'm not surprised that they've catered to local tastes because ALL global chains have to do that when they sell their goods in other markets. Otherwise they have a hard time selling their product.

McDonald's has that technique down brilliantly. Every regional Mickey D's sells products just a wee bit different than everywhere else.

I really like the mochi ring dount. I can't tell the difference between their version and the Mister Donut one. They seem practically the same to me...the only thing is MD as more variety in flavors than DD.

abstractpoet: thanks! i will have to try some of the other kinds, though personally I'm not a big fan of jelly filled donuts. I had the feeling it might have been that location.

rose: me too! I think I was less shocked by the poshness of the Dunkin Donuts after seeing the lounge atmosphere it had in Korea... and yes, McD's does have its customized globalization down to a science, including its Hello Kitty happy meal toys and corn soup and mos burger rip off rice bun hamburger.

I think there's a DD outside Taipei Main Station now (but I'm not totally sure). There's one all the way out in Dansui too.

I agree with abstractpoet, the jelly and cream filled donuts are definitely the way to go. I like the Boston creme the best. Boston creme actually grosses me out in the States, because there's usually way too much cream, but here I find the amount of cream to be just right. Oh, and the cinnamon apple donut is pretty good also.

I'm going to disagree about McDonald's.

Yes, they have a winning format, but they don't tamper with their main products for the local market. A Big Mac in Taipei tastes exactly the same in Singapore, Japan, England and Canada and those all taste the same as they do back in the US.

McDonald's genius is adapting both the periphery products like rice burgers and fried chicken to compliment their main products, and adapt the environment in which they serve the food.

No McDonald's in the US would ever consider having dining space large enough to let half the population of the nearest school spend all evening there doing homework while sipping one glass of tea.

They make their product popular with the local market whenever possikble.

Companies that go in and change their core product based on local taste devaluing their own brand by loosing consistency across markets.

That said, DD in Taipei tasted fairly normal to me when I was there earlier this year, but I'll only touch the chocolate-glazed donuts, so my exposure to other types was limited.

(And since Mr. Donuts' chocolate tastes more like lightly-sweetened mud, DD's were a hands-down winner. AT the time, at least.)

emily: thanks! i will have to try the boston creme or the apple one then and let you guys know...

gridman: i don't think we were disagreeing about the core burgers/fries etc tasting the same. that's part of what keeps me happy- that you can get chicken nuggets and fries anywhere around the world and it should taste exactly the same. but i'm happy to get the hello kitty toys here!

Oh, and I also like the self serve approach better than ordering at the counter--I always feel too much pressure to decide at Mr. Donut.

The degree-of-sweetness rating system is a nice touch too--don't know if you noticed that when you were there, joanh. 3 stars would be "too sweet for Taiwanese". =)

Other locations that always seem to make my jaw drop upon finding them:
- Shilin;
- Zhongxiao West Road, across the street from the Main Station;
- Danshui.

I'm a slave to Boston Creme and Bavarian Creme. And in Taipei they have Strawberry Creme, which suits me just fine.

I've rarely had a good experience at Mr. Donuts. And as a flag waving American (not really), there's no question DD will always trump Mr. Donuts. What they hell do the Japanese know about doughnuts anyway?! j/k. Like, what is a doughnut shop opening up at 11:00 (Xinyi) about? But of course that's a Taiwan thing, not Japanese.

Unfortunately, DD is closed in Taiwan now. However, you can check out Krispy Kreme. A bit of a different style, but good nonetheless.