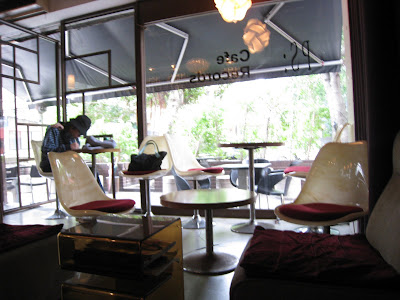 Kid friendliness: coffeehouse by day, lounge bar by night- not the kid friendliest place with smokers and hipsters drinking their coffee in loud music.

Looking for a new place to have some afternoon tea, I was tempted by someone online who declared that PS Cafe's brownie were the "best in the world." So why not give it a try at NT$100.

When I got to Dun Hua South Road, I spotted a tall office building with the address that I written down. Confused, I peered inside and the guard asked what I was looking for. I said, I was looking for a restaurant. PS Cafe? He pointed me through the building and making a left onto the alley parallel to Dun Hua where I spotted the small patio. If you know where Haagen Daaz is on Dun Hua, then it's sort of "behind" it.

PS Cafe is pretty tiny, but with cozy lounge seating and a full drinks menu for coffee, lattes and alcohol, with a strange assortment of snacks and dishes for its food menu- including such items as paninis, lasagne, poutine, nachos, popcorn and hash browns (all for under NT$200). 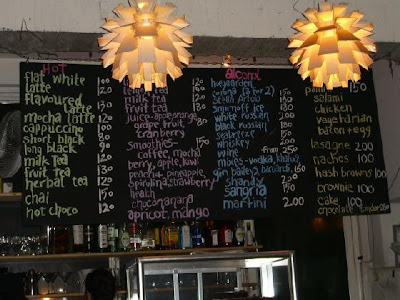 The service is friendly enough, though I think two of female servers were bored and putting on their makeup at one of the tables while everyone was being hosted by the guy server. They were happy to show us a sample of the nachos when we thought about getting something salty after eating something sweet, and they had made one for the other customers (microwaved shredded cheese w/ meat sauce atop of corn chips, btw. I miss goopy nacho cheese out of a jar). I'm curious about the other foods on their menu- though the servers seemed to be putting everything together themselves, so I think they microwave/reheat everything rather than cook it. 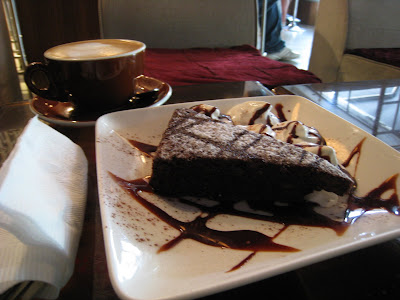 But back to the brownie. We ordered one brownie to share (NT$100). They were out of vanilla lattes, so I ended up with a decent milk tea (NT$150) and my friend got a latte (NT$100). The brownie was served warm, but was more like a dense cake than the traditional fudge brownie. It was still a good solution for a chocolate craving- dipping each bite into the whip cream on the side- but I couldn't help but to think that it wasn't a brownie. For those who prefer cake-like brownies, it probably won't bother you a bit.

PS Cafe is a good alternative to Starbucks or the nearby Haagen Daaz to chill with friends after work or shopping, or for a late night snack since they are open until midnight. It wasn't too crowded in the afternoon and if you didn't feel like coffee, you could get a drink with something a little extra instead.
Posted by joanh at 10:39 PM

Now that you mention it, I do like cake-like brownies. And chocolate cake for that matter. So this seems like it's worth a try! NT$100 isn't too bad.

yeah it's a sizeable piece and i like that it's served warm....

We swung by here after going to Pasta Della Rosa, and it was pretty good! I like cake-like brownies, so I was happy with the brownie. I also recommend the vanilla latte!

Olá Girl1
I took a survey over your blog and found it quite interesting. I would say that I like chicolate.
Best wishes from Brazil
Geraldo

emily: cool! i will have to go back for the latte... hahaha. that could be a good name for an italian place..

geraldo: thanks for visiting my blog from brazil!

I hope I am not mistaken but we went looking for Ps Cafe, for the said brownies and found only a place that is called PS Tapas, it is in the same location, (behind Haggen Daas) so they must have recently changed. However, it was more than a disappointment. Service was odd, the tapas were TINY and looked like were sitting around for awhile, and they tried to pass ground chicken liver for Hummus!! No brownies in sight :( :(

just wanted to mention that ps cafe has been closed for some time. the new ps tapas is run by the same people.
i went there one night for some food with a friend who had just arrived in taiwan and some of my close girl friends. we started off with very nice drink but it went down hill from there. it was very busy but i don't think that was a good enough reason for the extreamly poor service we received. there were about 6 of us and we ordered a lot of food. it took about 20 minutes for the capraese salad to come. after waiting for an hour for the rest of our food (bread and some other small tapas) we ended up having to cancel everything and leave. not a good impression. how long does it take to cut up bread and bring it to the table?

Actually PS Tapas is not run by the same people. PS Cafe was originally owned by two guys from New Zealand. The only things that remained the same after PS Cafe closed were the P and the S.

astar and anonymous: hmm, maybe i should mark this post as CLOSED then...

anonymous: so PS Tapas is in the same place as PS Cafe.. that's confusing!