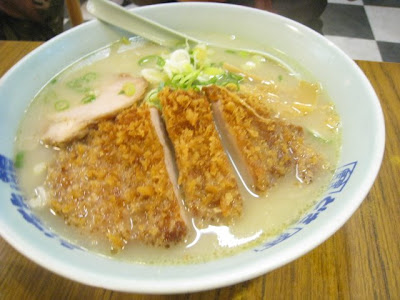 ED NOTE 9/2010 The menu is back to Chinese/Japanese... no English menus anymore.. Weird!

ED NOTE 11/9/2008: Went back for dinner and the menu now has English with still pictures for every dish. Lots of set menus or stand alone bowls of ramen. Onion Rings have also been added to the menu!

I'm not that picky about ramen, I think. But I've run into so many medicore bowls in Taipei. You'd think it wouldn't be that hard to serve a bowl of hot, slurpable broth with fresh ramen and a variety of equally hot, tasty toppings. Even places I thought that were pretty above average ended up being not as good on later visits, such as Noodle Shop (it was work rather than joy to eat the whole bowl and the broth wasn't up to par that day. Maybe watching them put together the bowl assembly line style didn't really help) or Watami where the cold noodles were so tough/chewy they were hard to bite apart and the soup was vinegary but not sweet, so sort of bland actually.

But then you find a little shop like Dosanko Le San Nian Ramen and want to try everything on the menu. Every so often, I visit my grandma and relatives and I ask them to pick a place to eat. They were the ones to take me to Celestial, THE place to go for roast duck in town, and the equally crowded Chinese Restaurant at Brother Hotel where the dim sum is still offered tableside by carts and everything is fresh and good enough to order seconds. Anyways, relatives will always take you to their tried and true favorites, so I've gotten a lot of "strongly recommends" from them, and Dosanko is no different. 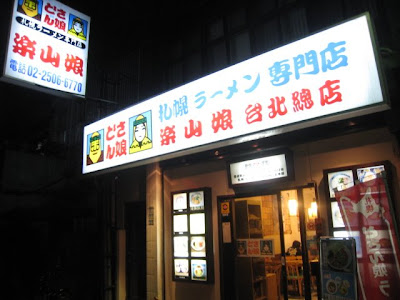 A totally non-descript shop with a bright sign outside in a small alleyway, it quickly filled up after we sat down. (But after digging around on their website, they have four other locations around Taipei and even a location in the Bay Area). 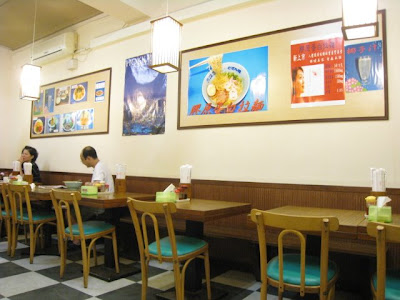 The menu is in Chinese and Japanese only, but there are a lot of pictures. And a lot of choices, with all the ramen from NT$145- NT$210. Everything from the stereotypical hot ramen with cha-siu, to vegetarian cold salad noodles, there's ramen in curry, topped with tonkatsu,or with options for pork broth, miso broth, spicy mala style, shoyu broth, or even topped with corn or butter! 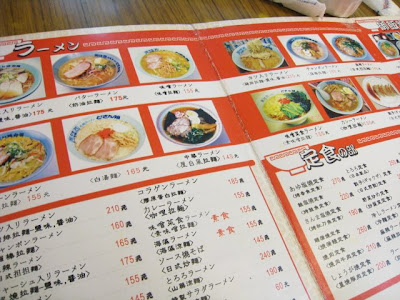 On my first visit, I ordered what my grandma ordered, which was the Chiang Pon Ramen which is kind of like Chef's combo with slices of pork, egg, fishcake and some bamboo in a pork broth. 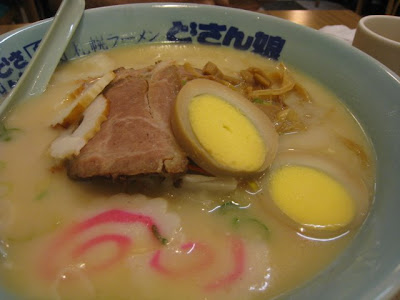 I devoured it. Everything just fit together and made it a complete meal. But I also sampled from the other people at the table and I could not stop eating my mom's cold salad noodles. 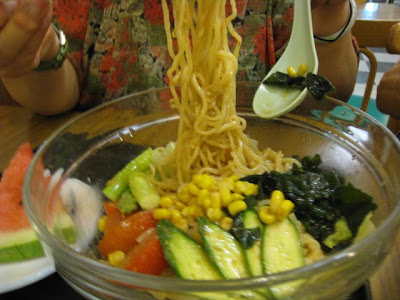 With miso dressing that was sweet and vinegary, it was full of sliced cucumber, tomatoes, asparagus, corn and seaweed. These two were my favorite two and what we ordered again the following time I went.

I had a bite of my cousin's tonkatsu ramen (pictured up top), and it was also good.

It made me want to try the curry tonkatsu the following visit, but it was a bit of a let down. The curry was less thick than I like it and filled with too much onions. 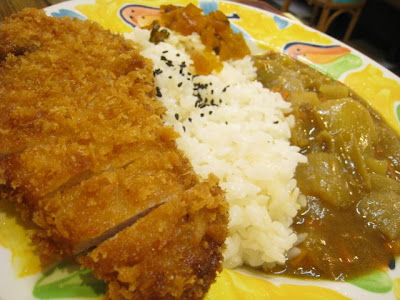 Stick to the ramen.

My friend also ordered the cold soba, which was cold green ramen served soba style. The texture was definitely chewy like ramen, not like buckwheat soba. He liked it, it just wasn't I thought it was going to be. 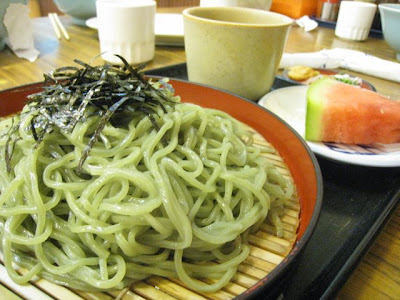 When we were finishing up with our meal, the owner was chatting with my grandma. He had moved here from Japan over 20 years ago after spending awhile in NY. It also amused me that he sat down to eat himself and read the paper, and he had freshly made onion rings!

If you are ramen lover, you will totally have to try out this shop. I hope it won't disappoint and maybe I'll see you there. It's a great place to take the family, yourself or even a date who will be amazed that you found this little shop.

loving the new google map feature. i don't live in taiwan, but i love torturing myself by reading your blog and looking at your pictures of food...while i'm HUNGRY. :)

Ooh, the map is key! I didn't recognize the street name, but now know how to go on the way to work.

I've just discovered 鮮芋仙 in the last month, and I'm addicted. I'm doing everything I can to get sick of it as soon as possible, if you get my meaning.

green noodles!
i unashamedly appreciate superficiality with food.
and it sounds like it bit much chewier than its buckwheat counterpart.

irene: thanks for reading and for commenting! hope to hear from you again if there's anything that makes you REALLY drool..

keauxgeigh: yeah. I'll try to get in the habit of putting a map. Let me know how you like it if you get there. I haven't been to Meet Fresh yet! maybe that's a good thing? :)

sera: yes.. much chewier. kind of like spinach and tomato pasta, right? :) pink soba is fun too!

Hello, nice blog. However, to be truly helpful to would-be Taipei visitors listing the nearest tube stations would be brilliant. Just my tuppence.

jan: hi! i don't always take the subway/mrt so i don't know the closest stations to every place. in a effort to help though, i've added google maps. so you can either use that or call the restaurant.

Was that green noodle "Cha Soba"?

says it's a specialty store for Sapporo Ramen.

That means their Miso Ramen should be especially good. It should be worth a try!

Forgot to mention, チャンポン or Champon ramen is a Nagasaki specialty (South). I also like Champon - it's one of the healthier ramen-type out there: the picture looks yummy.

Very worthwhile piece of writing, thank you for your article.

Might be closed, Joan. Not coming up on Google Maps for Taipei and the website 404s. I see a hit for LA, though... XD