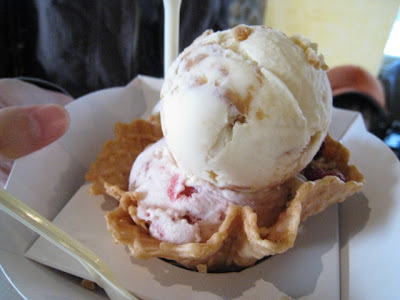 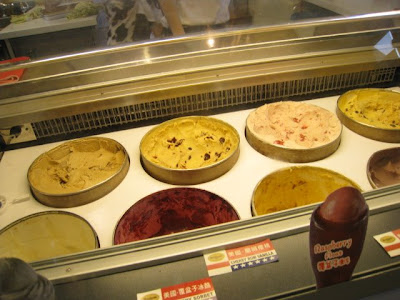 The first time I had Big Tom's ice cream was probably over 4 or 5 years ago- at the cute and cozy location near SYS Memorial hall, hidden behind trees on Ren Ai Road. Although I loved the Peanut Butter ice cream and my fuzzy memory thought their waffles for afternoon tea were quite good, somehow I didn't make it back that often.

So I was excited to see the huge Big Tom's in Danshui after visiting the Fisherman's Wharf and had to see if the Peanut Butter ice cream was good as I had remembered. 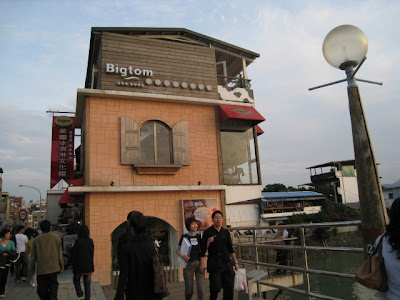 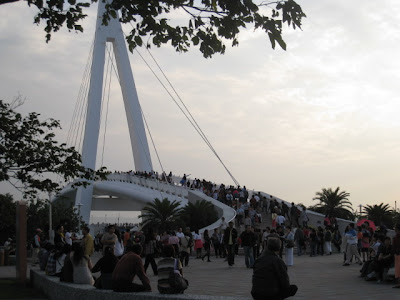 And it was! The thick chunks of peanut butter are swirled in the ice cream and melt in your mouth. The Oregon Strawberry was also great too and tasted as fresh as ice cream could taste. When you get your ice cream, you also get this little spoon with tiny bumps that makes you almost notice the ice cream more, by "bump"-ing the focus to your tastebuds and tongue.

Big Tom's ice cream has a great range of flavors and each flavor carries off the perfect balance of sweetness, creaminess and heaviness. And that's because their ice cream is stated to use "all natural ingredients." It's definitely a contrast to times after eating a few bites of certain flavors of Haagen Daaz or Coldstone's I feel overwhelmed with how sweet or dense it is and don't want to finish it, but yet don't want to waste the money that I've spent on it.

And Big Tom's service surpasses the sometimes snooty Haagen Daaz service by a long shot- they were friendly and generous in letting us try samples- and their quirky cow-themed decor makes the whole space fun (and a bit like Ben and Jerry's).

Okay- I'm going to rant for a moment here about Haagen Daaz.

My friends and I had a few negative experiences with Haagen Daaz- starting with their differentiation of "to go" and "sit down" orders. My friends ordered, paid and received two huge ice creams sundaes at the Shin Kong Mitsukoshi Haagen Daaz and then tried to sit down in the lounge-y area and told they couldn't since they had gotten their orders to-go (and in the paper cups). When my friend offered to pay for the service fee (that's charged when you sit down and eat), they were adamantly refused even though the space was pretty much empty on a cold weekday afternoon. It's the kind of thing that makes me not want to give them my business because you have two customers that have just paid US$20 for ice cream and you're not going to let them sit down in your space to eat your ice cream because of bad corporate logic that says only customers that declare they want to eat "here" get to eat here? It's one thing if the place is packed and there's a line and they are taking someone else's space, but it's another if it's totally empty and they are offering to pay a service fee! Anyways- something similar happened to me before at Vieshow Haagen Daaz, not to mention another time I wanted to just get a scoop of ice cream and asked if I could pay extra for banana on top and they said no, I had to get the banana split (with 3 scoops) to get banana.

ANYWAYS- if you haven't yet tried Big Tom, you'll have to give it a try on your next date, ice cream craving or afternoon tea with the girlfriends- or maybe take that special someone for upcoming Valentine's Day.

It doesn't have as many locations (especially in malls) but they are the only one on the 85th viewing floor of 101. And that is pretty awesome. 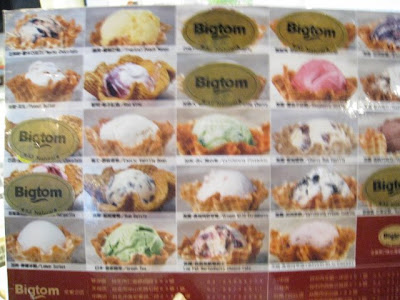 Maybe it was my imagination, but the scoops even seem bigger. Other de-luscious flavors include Mocha Choco, Kahlua, Vanilla Bean, Green Tea, low-fat Marionberry Cheesecake. They also have toppings and other desserts. One scoop is NT$108 and 2 scoops is NT$178, but the price also includes the waffle cone.

Their website also says they have ice cream making classes with a big hand-crank old fashioned ice cream maker, but didn't offer any information on where or when.

I think you missed the best and most unique flavor: Blueberry Ginger! Try it! I've never tasted anything like it!

Looks like a great place! The building it is in has some great architecture. And they were creative to make a housing for the waffle cup too, which improves "ease of use". It looks scrumptious!

looks good! i think i'm gonna put that on my "Want to Do" list for spring break. (earliest i'll probably be back next time) :)

I just saw it in Danshui when I rode up there yesterday! I was tempted to stop in, but that sure would've taken momentum out of the ride. There's also a location in Kaohsiung at the 文化中心. My cousin took me there. Blueberry ginger sounds like a must.

On an aside, the peanut/ice cream spring rolls you mentioned in the Longshan Temple area also have a stand in Raohe night market, as I also found out yesterday, post-ride.

i also had a very bad experience with Haggen D'azz in Vieshow Cinemas.

anyone who lives or will be travelling to LA, please be sure to visit Yogurtland on Sawtelle and Olympics. They just opened and it is awesome! I couldn't get enough when I was in Irvine so I am gald they open one in this awesome West LA location.

You can try the sweet cream with strawberries at Cold Stone, that is the only one I eat because it isn't as sweet. I used to live near a Cold Stone in the US, 5 minutes walking time, so I was there a LOT. Just one trip to Cold Stone here in Taipei, I never went back again. I ordered sweet cream with strawberries, and they looked at me weird because everyone else would order the big "sundaes". Also, the portions a LOT smaller, I want to say 1/3 less than the States.

do they have taro flavored ice cream?
i was always hoping to find a rich creamy taro ice cream perhaps with taro bits in it but all i came across were either very timid flavors or soft serve types

is it not weird that all their ice cream is made in the US, yet all their stores are in taiwan..? hmm. still want to go and try it, though ; P

IslaFormosa: wow.. that sounds very unique! i will give it a sample next time!

EatTravelEat: I like how the waffle cup is included in the price as opposed to other places.

Pauline: cool! let us know which flavor you liked best!

keauxgeigh: yeah. it's closer to Lao Jie rather than the Fisherman's Wharf. oooh.. I will look for the ice cream wrap at Raohe next time!

brandy G: i know! i'm so excited about Yogurtland on Sawtelle!

virginia: i really want to try the red velvet birthday cake that coldstone's has!

sera: i think they do have taro... i can't remember though since i personally don't like taro. you should also try the ice cream place near XiMenDing.. they should have taro!

carly: yeah.. i find it a little weird too, but maybe it's easier for them to manufacture it that way and ship it over than build a manufacturing place in taiwan?

Holy crap that is one huge ass scoop of ice cream. I'd be all over the mocha choco and kahlua next chance I get. Thanks for the 101 location, too. Stowing that piece of info in my brain for sure.