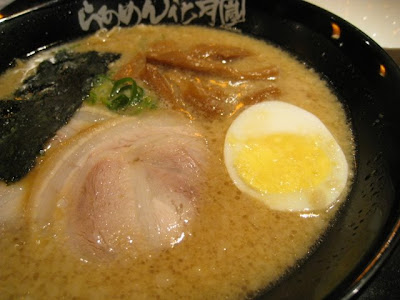 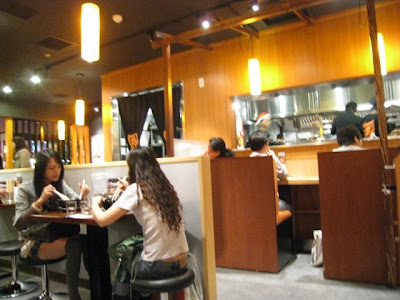 Over the past few years, the Vieshow food court has stayed mostly the same- Burger King, Haagen Daaz, Doner Kebab, the Korean and Taiwanese places, Bellini Pasta- with some turnover in the Pho spot, Froot and a long time ago Taco Taco. In the back, you can play some arcade and basketball shooting games while waiting to see your film. And what used to be a DVD/CD shop is now a ramen restaurant.

Apparently, movie goers have been waiting for ramen. Ramen Kagetsu Arashi was packed on the day I wanted to try it and after waiting a few minutes on the list, I grabbed my seat. The menu is only in Chinese and Japanese with a lot of pictures, so I wasn't sure what made the ramen different from from the places- but apparently this is the newest Taipei branch of a popular ramen chain in Japan. 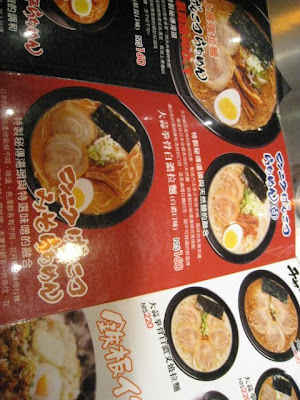 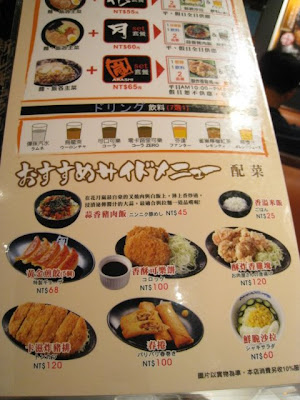 The space is a natural modern, though a bit tight as the tables are on the small side and they want to get you in and out.

On every table, there's a nice little assortment of spices and seasonings to customize your ramen as you like it. 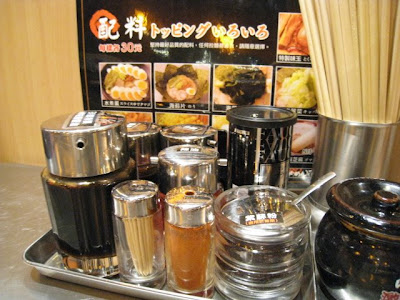 I ended up getting the bowl with the biggest picture and the shop's best seller with a "No. 1" (NT$160). But after eating it, I wasn't crazy about it- the "Ninniku Genkotsu Ramen" broth just seemed oily and not had a slightly burnt garlic flavor. The cha shu and noodles were decent, but the tastes overall weren't up my alley. Was I missing something? The white pork broth soup was better. Maybe I should have stuck to my preferred miso flavors. At that point, I had wished I had walked to Ajisen Ramen at A4 instead. 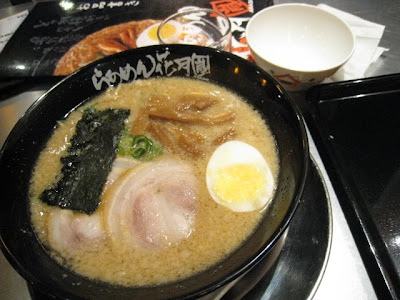 It was only after getting back home and doing some googling that I find out that Kagetsu has a lot of fans- the soup is a "shoyo tonkotsu" or soy sauce pork bone soup and supposed to be oily and rich.

And when you are done, you gotta deal with the line again at the register which seemed to take almost longer than the meal. Maybe they've improved that since I've visited, but you'd best stick with your other food court options if you are in a hurry to catch a film or plan in the extra time.

I'd love to hear from the ramen lovers out there if I should go and try it again, or maybe I'm just a miso ramen kind of girl.

I'm surprised you didn't enjoy it terribly. My brother in law thinks Kagetsu Arashi might just be the best ramen in Taipei.

And I enjoyed it immensely.

Although to be fair, when we went in late late December, they had a seasonal offering of BLACK ramen (where the oil used is black seasme oil over the standard ramen). The broth is a bit heavy (greasy?) but definitely rich and great. Just don't do what I did and eat at Fei Chien Ou for grilled unagi over rice dinner after having ramen as an afternoon snack, and then a tapioca milk tea at Chun Shui Tong as a late night drink...stomach will react quite violently :-)

There are two or three other ramen shops in Breeze Center but my bro in law says they are not as good. Then again, different strokes for different folks.

Kagetsu Arashi also has a teppan chahan (kind of DIY at the table sizzling platter fried rice, where you add butter and stir it up yourself). Sounds good, but maybe next time.

I remember the gyoza at Kagetsu Arashi was pretty good too. Perhaps there is better ramen around Taipei, but for sure way way way better than anything in Northern California or even Daikokuya in Los Angeles (and arguably Santouka).

we have ajisen ramen here in melbourne australia too, personally i'd prob score a 7 or 8 outa 10, so they r alright to my liking. hmm havent been for a long time tho

I've been to the Vieshow store and I tried their fried rice. Sounded amazing (like Pepper Lunch's beef plate), but alas it was not very good. Do not get anything with "shrimp" in it. It's dried krill (xia mi?) and it made me lose my appetite. I want to go back to try their ramen, but that rice experience has made me less interested in doing so. Sigh... even the ramen museums in Japan are better.

really though, what did you expect from a food court in a department store?

is FAR better imho, you can actually choose the hardness of your noodles, the base, etc. Like shin sen gumi back home or more aptly, like the more famous Japanese ramen shops in Japan!

Hi Hungry Girl!
I love pork-bone broth, but the one in your picture does look awfully greasy. There's a place I like in the Dun Hua MRT station "underground street," near Exit 4. It's just a plain little ramen shop called "Sakura Japanese-Style" （櫻日式料理）, but it's inexpensive and yummy. I can't remember whether or not they have an English menu (they do have pictures and a few of those wonderful plastic food sculptures, though). My personal favorite is the kimchee pork-bone ramen.
rq

KK: maybe i ordered the wrong type? or maybe it's just too fatty and garlicky for my taste..

dennis: i've seen the ajisen ramen everywhere! it's not the best, but it's 8/10 like you said.

Joshua: yeah.. i had high expectations too, i suppose. definitely can't beat anything in japan!

zelik: hahah. wow! i'll have to check that out!

rq: hi! mm, kimchee pork bone ramen sounds really good! i think i could eat some now even though it's 930 am!

There are SO MANY types of ramen that it depends a lot on what you feel like having that day. I haven't been to Kagetsu Arashi yet, but by their pictures and by the reviews, it sounds a lot like the type served at a shop I know in Gotanda, Tokyo. That shop even puts additional oil through a strainer to sprinkle on top of the ramen, almost like grated cheese on salads. It's extremely unhealthy, but very addicting.

Aside from a couple of pet peeves, I like all ramen to varying degrees - tonkotsu, shoryu, miso, and different thickness of noodles, etc... (I love spaghetti, but I can't stand that type of noodle in ramen, and there's a limit to the stinkiness of a soup - I can't stand 天下一品 in Japan - the smell of the soup is just vile) But I usually order ramen with reduced oil and harder noodles. Guess I'll get around to trying the ramen shops in Taipei, once I get tired of the local foods.

Okay, I checked out the branch at B1 in the triangular ESLITE building on Dunhua S. Rd. near Chung Xiao E. Rd. Compared to most ramen shops in Tokyo, this one is pretty good. This type of ramen is ニンニク豚骨ラーメン or garlic pork-bone ramen, not as common as some other types, like soy sauce, salt, miso, or plain pork-bone. The best rendition of this type of ramen that I have found in Tokyo is here:

If you like Ramen Kagetsu Arashi, you should try this restaurant above when you visit Tokyo. Overall, I thought Kagetsu was good - the pork melts in your mouth, the noodles were fresh and chewy, and the soup was heavy but a pretty good rendition of this type of ramen.

I think joanh hit the nail on the head. There are too many ramen types - so when reviewing a ramen shop, you need to either evaluate it for the type it is, or evaluate it with your personal preferences built in. Most Japanese (except ramen aficianado's) actually have a favorite type or two, and may actually hate most other types. I, on the other hand, like all of them, except one or two types - but I like quality ramen.

Like Ken, I sampled some of Kagetsu's product at the Eslite lower level food court on Dunhua S. Rd. I would have to side with you in that I thought it pretty greasy and salty, although that may very well be the style of ramen preferred by its adherents. The straight, thin noodles were just a hair thicker than I like and I was a bit put off by the strong garlic flavor and the generous helping of sour bamboo shoots. Still, different strokes for different folks I guess.

My mom really enjoyed the teppan chahan style fried rice which is served tableside for a dramatic presentation. Since the cast iron pan it's cooked in is very hot, the outer layer of rice is seared in much the same way as is korean dolsot bibimbop. She has a soft spot for burnt rice as it reminds her of her childhood and was happy as a clam. She did complain however, that her accompanying miso soup was over salty. We also tried the fried chicken nuggets as part of a set order and were disappointed to find the meat somewhat chewy. All in all, I don't think I'd go back for the ramen, or if I did, I would opt for the white pork broth instead.

Being somewhat fixated on ramen at the moment, I tried the kimchee ramen noodles at the Sakura noodle stand mentioned by rq upthread. It's located in the Zhongxiao Dunhua MRT food court by exit 4. These were pretty decent and cheap as well (NT$129). I liked the fact that the pork slices were fairly tender and the broth was rich and savory. The thin straight noodles were a bit boring however and the kimchee added a garlic note I found unnecessary. It had corn as well which added some textural crunchiness. Not bad for the price though I think I will stick with a non-kimchee version next time. If I had to choose between the Kagetsu and Sakura, I would probably opt for the latter.

Thanks for blogging by the way -- I'm really enjoying your recs. I have you to thank for both Ice Monster and Yong Kang Kou which I was lucky enough to visit on a previous trips before they closed (that street has been gastronomically devastated). Also, because of your blog, my family has booked a table at the new Mala Yuanyang on Zhong Xiao E. Rd. for Xmas dinner which should prove to be a memorable evening.

Still on this ramen kick btw, so I think I'll try Hachiban Ramen next at The Mall on Dun Hua S. Rd. It's another large Japanese chain but I really enjoyed the quality of their noodles when last I visited Bangkok.

Dragged me mum to the Far Eastern Shopping Mall ("The Mall")on Dunhua S. Rd. today in search of Hachiban ramen mentioned above. Found it in the lower food court as Genpachi Ramen. Wasn't disappointed. The quality of the noodles themselves were self-evident: golden, springy and pure joy to slurp. I had the pork broth which was so rich and creamy, I suspected the addition of milk. The slices of roast pork melted in my mouth. Pretty pricey at NT$220 per bowl. Extra noodles cost NT$50. Highly recommended.

Forgot to mention that they offered the noodles cold, by themselves, if you prefer. They also had a "Zhajiang" style ramen served dry and with ground pork and spicy fermented broadbeans on top. Yum. Defo going back.

would have to say out of all the ramen i've had in taipei, Yamagoya （山小屋）is the best value and taste...anyone else tried it?

would have to say out of all the ramen i've had in taipei, Yamagoya （山小屋）is the best value and taste...anyone else tried it?
it is 216巷,19弄 I believe, the one with the 7/11 on the corner.