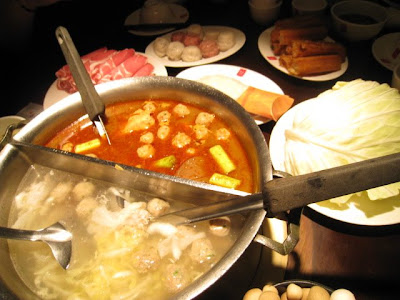 Kid friendliness: i think i saw high chairs. not for picky eaters. only spicy hotpot or pickled cabbage soup hotpot 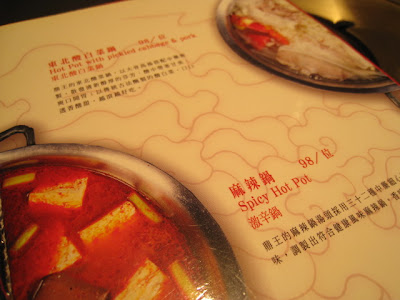 If you haven't heard about "mala huo guo" or spicy hotpot, then you've been missing out on the perfect meal for a cold and rainy day in Taipei. "Mala" hotpot is a spin on the regular hotpot, but offers a ultra-spicy deep red blood colored broth to cook your meats and vegetables in. 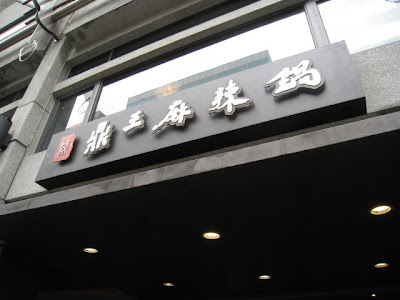 Tripod King or Ding Wang is one of the more famous joints in town- my girlfriends were raving for weeks that we had to try it and said that every time they attempted to call to make a reservation the line was busy. Sometimes it is easier to just go there ahead of time and get a reservation in person.

I'm assuming that the name Tripod King comes from the shape of the hotpot- a huge metal bowl with three short feet. 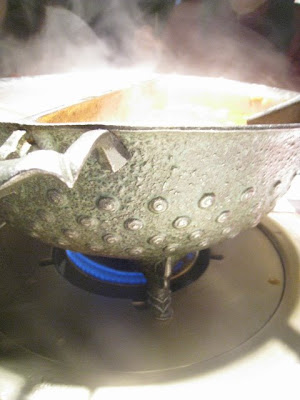 There's a set up fee just for the all you can drink broth- NT$98 per person- and then you pay for whatever additional plates of sliced meats, fresh fishballs or vegetables you want (NT$90-290+). If you want to have a half spicy and half not spicy like we did, it's an additional flat fee of NT$150. It ended up being about NT$500 a person for our group of girlfriends- it would probably end up more for a bunch of guys.

The menu is in English and Chinese with a picture for almost everything. I did giggle at a few typos and the way they attempted to describe the more unusual parts of animals. Would you like some "rice nuddles," "selected rectum" or "selected honey cumb?" 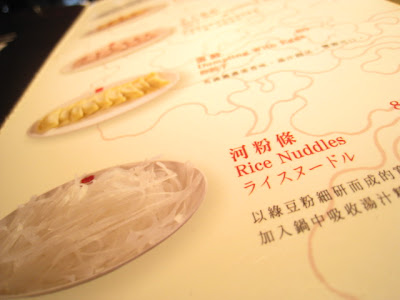 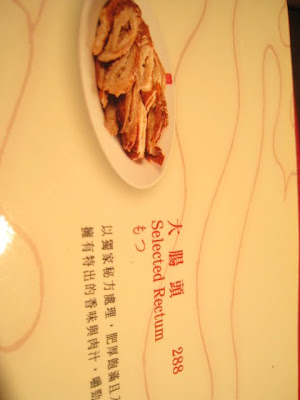 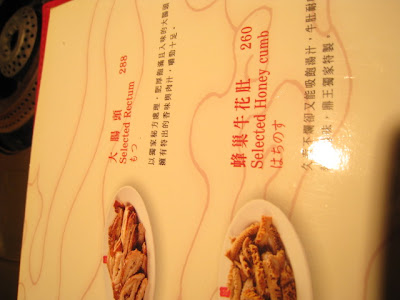 But one thing that is pretty smart is that they have "assortment" plates for each type of thing they offer- for example, they offer 5 types of handmade dumplings, if you can't decide, you can get the sampler plate that has 2 of each. They also have sampler meatballs, sampler mushrooms, sampler 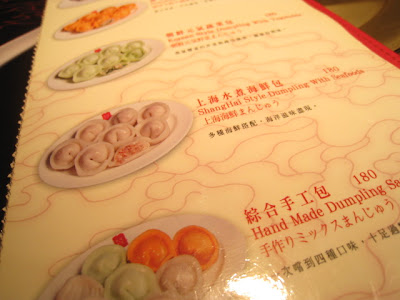 I also almost giggled after the waitresses bow after each time they come to your table. The first time was novel, but after each time (a glass of water, a refill of the soup, a new plate of vegetables) it kind of was a time waster when you were trying to flag down the waitress from another table. 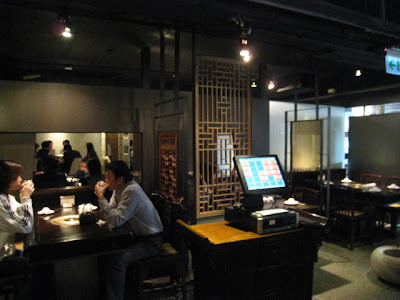 After you first sit down and order, they bring the hotpot to the table and all the dishes. The "mala" side already has large chunks of tofu and duck's blood (it looks kind of like chocolate tofu, as my friend's sister used to call it when she was a kid). The non-mala side has pickled cabbage and pork that gives the broth a slightly sour flavor. You can then go to the back of the room and get your own sauces and rice. 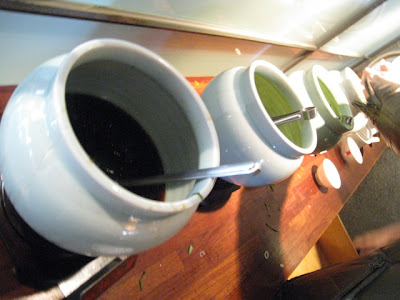 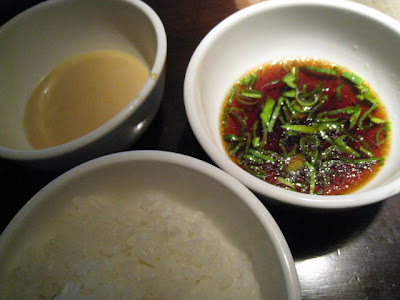 Supposedly you're supposed to use the creamier sauce for the mala and the soy sauce for the pickled cabbage, but I used them both.

And then once you get cooking, you've got a bowl full of food. There's huge ladles for everyone to use- if you're a first time hotpotter, try to keep your personal chopsticks out of the hotpot as well as remember to use a different pair of chopsticks to cook the raw meat.

Other favorites you should make sure to order are the "youtiao" or fried breadstick that will soak up the broth with a crunch, kind of like dipping your garlic bread in soup at an Italian restaurant. Also they have freshly made fishballs that they will spoon in for you. 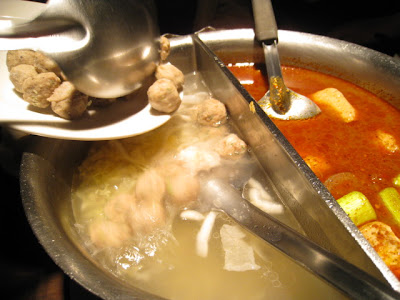 I wasn't so crazy about the Szechewan mini-meatballs, but mostly everything was good. The mala is too spicy for me to drink, but I enjoyed digging out some duck's blood and tofu and eating it with the rice. But I'd cook my meats and other things in the preserved cabbage side.

This trip to Tripod King was actually after going to another Ding Wang that I liked better. Tripod King's name in Chinese is Ding Wang2 (Wang meaning King, so 2nd tone), and the less famous but equally good Ding Wang4 is the 4th tone. The other Ding Wang4's non-mala broth was not a pickled cabbage broth but their own hotpot broth, and they also offered lunchtime NT$100 noodles that were so delicious (and to be reviewed!)

My friend said that once they had a reservation for 10 or 12 people and they were all squished at a table for 10... which is all fine, except that they all had to share just ONE hotpot. If you can't wait to eat, you might be better off at the all you can eat Momo Paradise which has a hotpot for every 2-4 people.

But if you can get a seat, you shouldn't turn it down. And if you can, go with a bunch of friends or family so you can enjoy chatting while you sharing good food, and can try more things when you order for more people so you don't have a huge bill for just yourself. 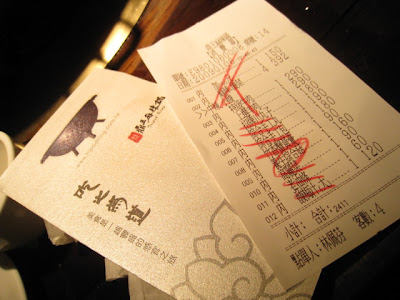 I have a tough time with Ma-La because it just keeps getting spicier. By the end of the meal, I can't taste anything anymore.

If you're looking for another good hot pot place (not sure if you already reviewed it), try Qi-Min. It's on the 2nd floor on a row of buildings with a Starbucks near the corner of Dun-Hua and Fu-Xing. They do organic hot-pot. Pricier than the typical hotpot but the vegetables are excellent and the soup base becomes nice and sweet without that artificial taste toward the end. Plus, they give you a large amount of meat as well as an appetizer and dessert. Plus, the atmosphere has a nice upscale feel to it.

wayne: i hear you. i can't do straight up ma-la.. i have to have my primary base be non-spicy and just eat a select few things from the spicy side. i've always passed by Qi-Min.. good to know they are good.. it always seemed on the expensive side.

It is kind of like what happened on one of our trips to China these years. At the Great Wall, one person was selling "watef, Beef, and camefa". They messed up the "R" for the "F" button on the keyboard.

The youtiao is also another interesting thing. I haven't tried youtiao in a hot pot before!

i was at this very shop on new years eve, that is 31st december. i was in tw for holidays and i went up to taipei with my friends. too bad i wasnt able to sample most of their food as i only had 40mins to eat b4 i had to leave and meet up with other ppl near Taipei 101 for the countdown. for my taste i thought the spicy side was ok (that is the original broth b4 any meat got cooked in it), and the non-spicy cabbage side was surprisingly good, alot tastier than i had anticipated.

unfortunately i didnt take such close look at the english part of its menu, would've been funny :) i really dont think rectum sounds very appetizing although anatomically correct :P

Hey there's a Momo Para in Tokyo as well- a friend has just recommended it to me.

If you can believe it I never had huoguo while I was in Taiwan. Are there any sweet huoguo's? I've heard of ones with fruit in the broth.

I really enjoy looking at the pictures of food in here. I've been several times to Taipei when I was a little girl. Wish that I could visit again someday and try all those delicious food :)

I am planning a trip to Taiwan. Do you think I should sign up for 8 days package tour or sign up for 4 days Taipei Free and Easy tour?

EatTravelEat: Yeah- typos no matter where they are always make me laugh. Youtiao in hotpot is SO good!

dennis: I like the non-spicy side too. Have you tried other spicy hotpot places? yeah.. i agree, rectum is technically correct, but just doesn't sound good!

sera: yah! Momo is from Japan! That's where I had it for the first time. I've never had sweet huoguo! What do you cook in it?

Selba: Thanks for reading and commenting! Hope you get to visit again soon!

Brendan: Hmm.. I don't know the difference between the two tours.. I guess it depends on if you want more structure and if you want to see other parts of Taiwan (if you are an outdoorsy person) or hang out in the city. It might up being the same amount of time in Taipei right?

This place is good, but not worth all the hype. Supposedly, the original is in Taichung, and is much better (according to all my local fanboi friends).

Momo Paradise is "meh", IMHO. I'd recommend you try out this place (I forget the name at this moment) at the corner of Renai Rd. and Anhe Rd. It's on the 2nd floor. Best all you can eat hotpot in Taipei that I've had. And they have Movenpick (sorry, dunno how to type the umlaut) ice cream!

I need to start understanding Taiwanese and Mandarin! Hehe, I ate at a few hot pot places in Taipei, but I have no clue as to the restaurant names. Very cool post, though; thanks for educating me and bringing back wonderful memories!

joanh: no i've not actually tried any other spicy hot pot restaurants, unfortunately i dont get to go back to tw often enough to have eaten at many places.

tripod king is overrated. if you want to try a good mala place go to 鼎旺（also ding wang, lol) for a better experience. the mala pot isn't spicy to the point where you're completely numb to the food you're shoveling into your mouth (adjustable to your taste, of course) but having tried both places i think the latter is simply better in terms of food.

if your computer can't type chinese just copy and paste what i wrote up there into a local search engine ;)

I actually like 太和 (tai4he2) and 天香回味 (tian2xiang1hui2wei4) the best. Both are not cheap, and the latter is "inner Mongolian" style, but oh so tasty (the inner mongolian is in quotes because my mongolian friends couldn't get used to the flavor). The First one has all you can eat black tofu/blood pudding, and stinky tofu, and has a couple of different levels of spiciness. The second has 2 different styles of soup, and you can also have the split pot. The base soup is really fantastic, and the ingrediants they have there are really special, and different from most hot pot places. BUT you have to pay for each and everything thing, but it's worth it. The noodles and the mongolian cake thingy is my fav.

bigbabygzus: hi! thanks for commenting! yes, i totally agree.. i really liked the other ding wang a lot and even more than tripod king. i think one of the advantages tripod king has is that the menu has a lot of english and photos, so it's good for first timers.

bluemei: i haven't been to those yet- they sound awesome. thanks for sharing and commenting

Hello...where will you recommend for milk-based hotpot in Taipei?