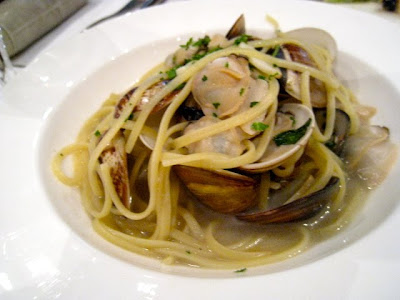 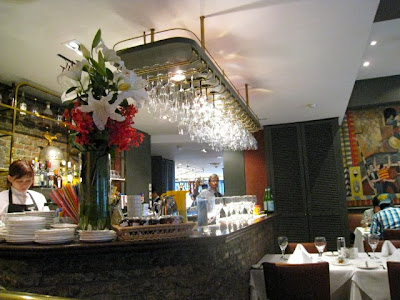 When I first started spending more time in Taipei in 2005, I remember one of the first Italian restaurants I was taken to was Pasta West East. It was classically classy, the kind of place where we saw couples out on fancy dates, where we took important clients for meetings, where you worry if you're dressed nicely enough and you're charged for your Evian water. I have memories of quite a few nice dinners there, but for whatever reason, over the years, I found myself going there less and less.

But when I was in the area and we needed a place for lunch, I was happy to revisit and finally get a chance to write it up for the blog.

You can order from the menu or order from the business set lunch menu which had three choices (NT$520-820) for the main course, and included soup or salad, dessert and tea/coffee. 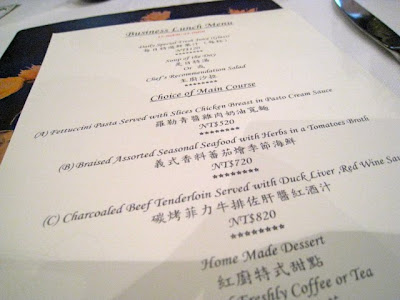 Once seated, we got our warm starter bread, which is a round thick bread sliced into pie-like pieces and comes with butter or a mini-jar of orange marmalade to accent the slightly sweet flavor of the bread. 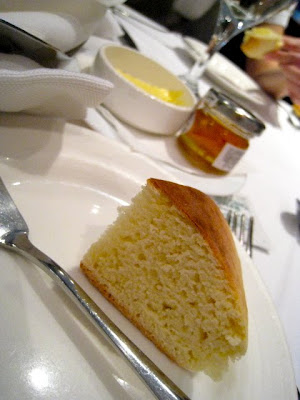 My soup of the day mushroom soup came fairly quickly and when I responded yes to freshly ground pepper, the waiter went a little overboard. I ended up having to scoop most of the black pepper out and put it on the plate. But I liked the soup, which wasn't too heavy or watery with plenty of slices of fresh white mushrooms. 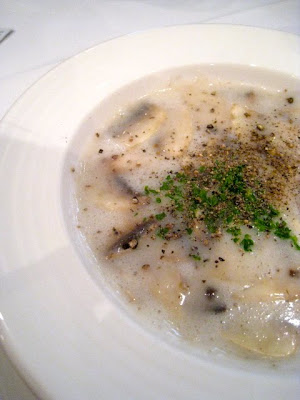 Two of my lunch companions chose to split a Caesar salad(NT$280) and clam linguine. Pasta West East pre-split the dishes for them and it still ended up being fairly healthy sized portions. I like the flavor of the dressing, though the few olives and hardboiled egg slices don't really add much to the salad. It was too bad because the menu said the eggs were poached, but I think it was just a typo. 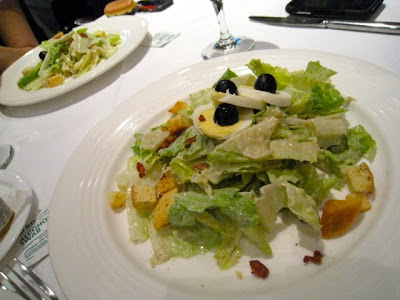 My fettucine pasta served with chicken breast and pesto cream sauce was quite a disappointment. The pesto cream sauce less creamy than a thick watery sauce and lacked the aromatic pesto flavor that I love. The thinly sliced pieces of chicken were interspersed in the pasta and also lacked any individual flavor. My friend looked at me in slight horror as I grabbed the salt and pepper (I almost never do this) and used them for my dish, but it didn't help very much. 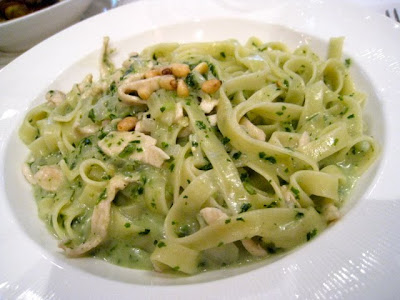 When I lamented about my disappointment of the dish to my friends who ordered the clam linguine, they told me that their dish was too salty and some of the clams were sandy. She agreed with me that the restaurant was not as good as it was in its prime a few years ago. I was definitely surprised- it was really too bad that the restaurant didn't put out consistently good meals to keep up with the competition.

The homemade dessert was more of the same- a banana cake that looked pretty, but was dry and crumbly- lacking the moistness or richness that would make it worth the calories. 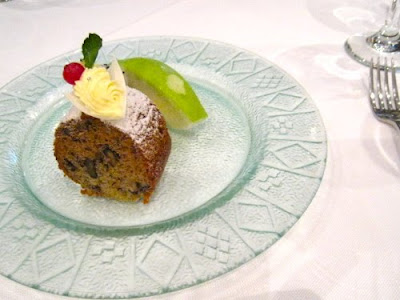 Eating here was like trying on an old expensive sweater and seeing that it wasn't as good looking on as it was before. Maybe the moths got to it, or the trends changed. For whatever reason, maybe the sweater would look better on someone else, I probably won't wear it anymore.


View hungry in taipei restaurants in a larger map
Posted by joanh at 10:47 AM

Email ThisBlogThis!Share to TwitterShare to FacebookShare to Pinterest
Labels: $$ depends on what you eat, area- Da An, area- MRT zhongxiao/dunhua, italian, romantic, salads

The mushroom soup and the salad does look good but I agree, the pasta and dessert looks so so to me. How did the waiter center all the freshly ground pepper in the middle of the soup bowl is surprising to me- those pepper mills usually spill out pepper everywhere.

Italian pasta recipe with olive oil, lemon, basil, 1 clove of garlic and pine nuts. For the pasta. orcchetti Apply in a small bowl, squeeze the juice of a lemon. Put the lemon rind aside. Chop 1 / 2 cup fresh basil. Rub a bowl with garlic clove. Chop the remaining garlic cloves finely. Place orcchetti drained into a bowl. Toss with basil, garlic oil and chopped olive until pasta is well coated. Add lemon juice and pine nuts. Mix well. Use the reserved lemon zest, grate it finely and add to the batter lightly coated.

I think there were some management issues around the time you revisited in '09, including the head chef leaving for Mondo. I went back with my family last year, and we all felt that "order had been restored." Would generally stay away from their creamy pastas, but the off-the-menu 香蒜辣麵 (similar to spaghetti con aglio e olio, but tailored to the Chinese palette) and sauteed mushrooms are pretty excellent.