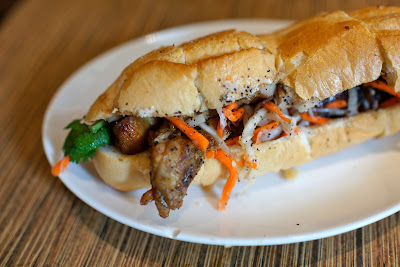 Kid friendliness: clean and spacious, though fills up quickly during lunch/dinner time; 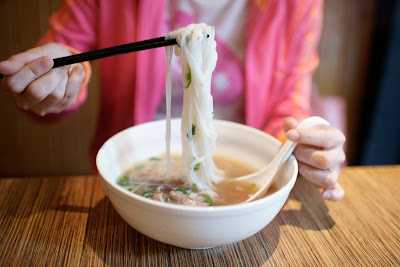 If you've never had Vietnamese food in Taipei before, get ready to try the real deal. Even before I stepped foot into the restaurant, I was drooling over photos of Yue Yuan Pho's banh mi Vietnamese sandwiches and pho soups, after reader Richard kindly recommended the new restaurant with "a yellow sign that says "Pho." (Thanks Richard!)

I quickly made plans with my friend S to give it a try and she said it was near Chang Chun Road. Good thing because otherwise, I would have ended up on Dun Hua S. Road instead of Dun Hua N. Road when I confused the two when telling the taxi driver the address in Chinese. I know, I'm retarded, but I still confuse the two in my head sometimes because I'm thinking of the "N" sound for "North" = "Nan" when in fact "North" is "Bei" phonetically. 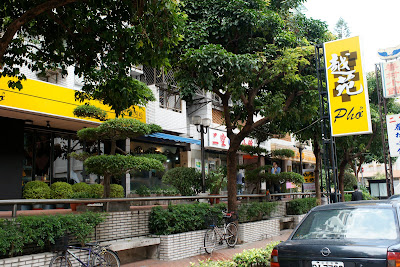 Anyways, once you end up on the lane populated with restaurants, you can quickly spot the bright yellow sign. At 11:30AM, we didn't have to make reservations, but the restaurant quickly became full after 12noon. 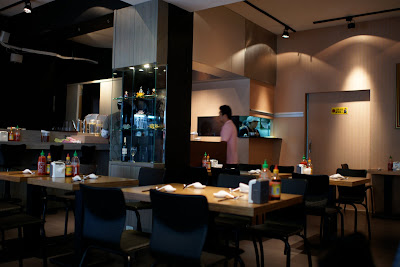 The simple menu is on a sheet of white paper in English and in Chinese. It's funny that instead of using the word "pho", it's instead titled "beef noodle soup." 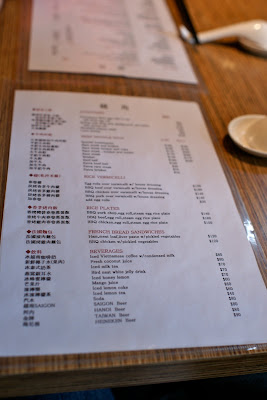 The space is sleek and clean, with lots of light from the storefront windows and a long mirror along the top of one wall that makes the space feel slightly bigger.

A bottle of Sriracha and Hoisin sauce are set on every table- believe it or not, I think this is my first time seeing Sriracha in Taipei. I don't know why, but it makes me excited- maybe because it reminds me of LA.

If you've never heard of Sriracha, here is a cool NY Times article about its not-Thai, not-Vietnamese, but American origins. 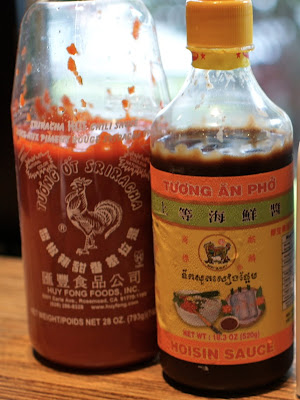 We were set on trying the beef pho, a dry noodle and a sandwich. But we got talked into ordering the "Luna Shrimp" by the waiter with a sense of humor, saying that it was what he ate everyday. I wasn't clear from the name that it was Thai style fried shrimp cakes, but after ordering it, he said it was enough food and we shouldn't order the sandwich. 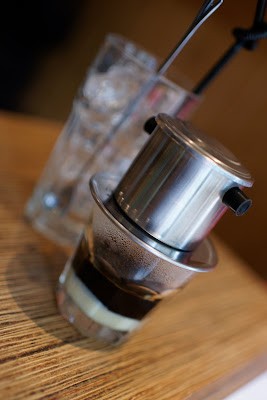 First came the plate of basil and bean sprouts and shortly after, a steaming hot small bowl of rare steak pho. (NT$140) The broth had a distinctive beef flavor, slightly sweet and spiced by onions and star anise. It really stood out from other broths I've had in Taipei. The beef quickly cooks after a few swishes inside the soup. 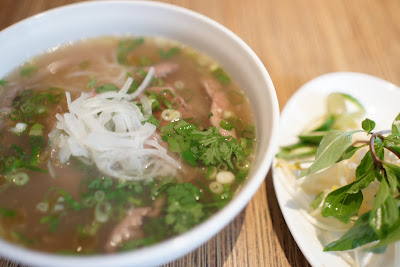 When I asked the waiter which of the rice vermicellis we should try, he suggested the BBQ pork over vermicelli with egg rolls (NT$140+30). You can also get bbq pork chop, chicken or beef with rice. 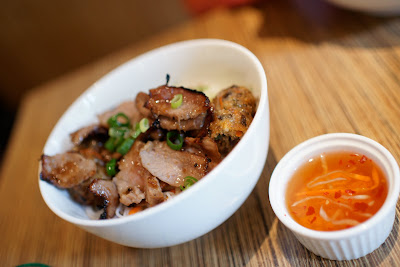 The large slices of grilled pork were tender and carmelized, like a Vietnamese take on the more familiar char siu. Buried underneath the pork were plain rice noodles on a bed of bean sprouts, where you could pour the house made dressing (or "nuoc cham") and make a sort of cold noodle salad. 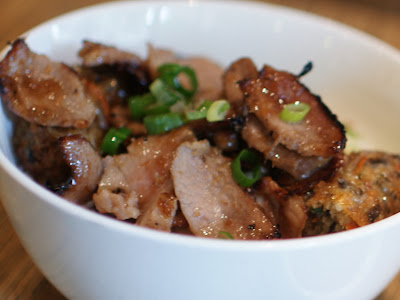 Next came the fat slices of the shrimp moon cakes, or called Luna Shrimp on the menu here (NT$180). Sure they were crispy, hot and thick with mashed shrimp, but they weren't what my friend and I came here to eat. We ate a few and offered a few to the older couple sitting at table next to us. Out of pity (and probably curiosity), they took a few. 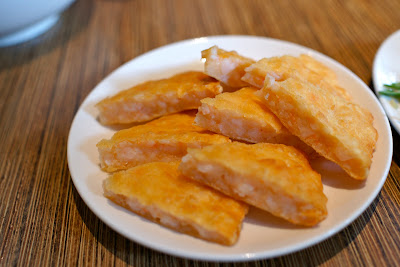 Though we were pretty full, I still wanted to try the sandwiches. After all, that was a rare find in Taipei. We reasoned with ourselves and decided we'd just sample it, and if we couldn't finish, we'd take it home. After ordering and waiting a few minutes, the BBQ chicken with pickled vegetables(NT$120) on french bread came. 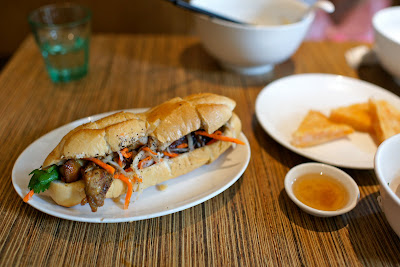 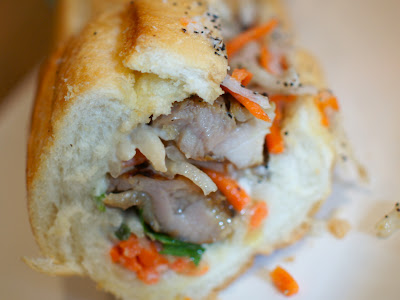 The succulent, hot, grilled chicken thigh, warm crusty french baguette, tangy julienned pickled carrots and radishes, and a slightly sweet mayo-ish sauce they used to "glue" it all together. It is perfection. And believe it or not, it's hard to find a good sandwich in Taipei, much less a good Vietnamese banh mi sandwich. I'm drooling as I write this and it's not even lunch time.

The food is so good, I must go again the following week with a gaggle of friends and order all the same things, but also try the spicy green curry with french baguette and the classic ham, meat loaf, liver paste with pickled vegetables banh mi sandwich (NT$120), which are both also amazing. Although this time, we have trouble getting service when the initial order of food is not enough (they are packed to the brim and running around like crazy. It seems only a few of the waiters are trained to take orders, some of the others are just delivering plates/cleaning up) and one sandwich order gets dropped for 20 minutes until we repeatedly ask for it.

It's pretty bold of a place to declare itself the best, as Yue Yuan Pho does on its Facebook page (or maybe a superfan set it up for them), but in this case, it is earned. It even kicks the butt of my former favorite local Vietnamese restaurant, Pho Hoa. The word of mouth is quickly spreading for this six month old restaurant in the good Vietnamese food deprived city of Taipei.

A second shop is already set to open this week or next, in the killer location between the Dun Hua Diner and Carnegies.

We tried it last time but still not as flavorful and authentic as Ming Jih Vietnam Restaurant. : )

I live nearby before and you should also try Ching-Ting Siao-Kuan (京鼎小館) for DingTaiFung-like dumplings. Japanese expats love eating here. It is just across Yue Yan Pho. There is also the 92 Tomato Beef Noodle.

You know just how to make my belly happy! I'm going to get this soon! Wish I could have the vietnamese coffee. :(

mike: ok! i will try ming jih sometime. i saw there were a ton of little restaurants that looked great on that street. thanks so much for the suggestions!

hamper: cool! hope you like it! :) they have some lemon drinks and other drinks.

I can't believe it: I just had supper, and your post made me hungry again :D. You know what else is simply mouthwatering? This little bit over here: http://www.pressdisplay.com/pressdisplay/showlink.aspx?bookmarkid=NEAKYF4L5648&preview=article&linkid=1222cc97-ecd4-425f-9f79-d07dcdddf8ee&pdaffid=ZVFwBG5jk4Kvl9OaBJc5%2bg%3d%3d

i haven't had pho or banh mi in a while...seeing this makes me real hungry...

I saw your post, didn't read it but saw that the address was near my house.

Since I'm French, I was kinda craving for some baguette! ;)

I went there with a friend of mine and I ordered the chicken sandwich... OH LA LA !!!

That was the best Vetnamese sandwich I ever had... even the Vietnamese shops in Paris Chinatown don't do it this way... it was amazing, and now I have to fight not to go there everyday! :)

Thanks for the tip, and hurra for your blog! (and the pictures look very pro now!)

Media Mentions: glad it made you hungry

Pierre: thanks so much for your comment and sharing your thoughts. i've never been to Paris so it's great to hear your perspective!

pierre: thanks also for the comments- i have been using my heavy duty DSLR more, so hopefully everyone enjoys the pics. Hope you can take some time to vote for the restaurants you like in the Readers' Poll!!

I asked the owner about how they procured their Sriracha sauce... He said that they bring suitcases full of it whenever they come back from the US (Just like we do! - but for us, just 1 or 2 bottles at a time)

Banh mi! Wow, great description. Who can resist a great Banh Mi. The other items look good too.

chaz: that's funny. i guess they wouldn't sell it then

Mmm.. pho is my remedy to everything. =] I haven't made it in a while though. Have you ever tried to make it?

I'm also curious as to how the pho in Taipei tastes compares to the ones made in the States. I've had pho in Ottawa, Montreal and Toronto and I think they all taste very similar - a sweeter broth with a punch of cinnamon and a pinch of cloves and star anise. Is that what the pho in LA even tastes like?

Thanks so much for this post.. I tried Yue Yuan the same day I read your blog and really enjoyed it!!

I'm glad you made it Joan! I ALWAYS get the half-fat raw beef noodle pho (ban-fei sheng niu riu he fen) and ALWAYS get a chicken sandwich to go!

I go there at least twice a week!

I'm going to put together my own review for this place when I have time, but in short - it was fantastic. I also visited the new branch near Liuzhangli, but wasn't as impressed. It could have been that I ordered a different flavor banh mi, but the one at the branch just wasn't nearly as well put together (both physically and in taste) as the one I had at the main location. Still, it's quite good and it's good to have a solid lunch option a bit closer to where I live.

Hi u people, I'm from Vietnam, being in Academia Sinica now and with only some Chinese. It's boring in Nankang 'cause there's nothing here aside rain rain and rain. It's my great pleasure to get to know 'bout some restaurants here in Taipei offering my traditional food like Pho (niu rou he fen). I would like to introduce to U another one which I often visit every Friday for dinner. http://noodle.zeelive.com.tw/

I was craving Vietnamese so I thought I'd stop by and check out what you recommend. I'm definitely going to try Yue Yuan Pho, maybe even tomorrow. I've tried another place which my friends rave about and I'm surprised it's not on your blog here.

Give it a try as well. It's called Madam Jill's.
http://www.chuilin.com/

This place has the best fresh rolls in Taipei, and the BB! pork is also superb. There is better pho in this city but what's key about this place is the Sriracha sauce.... I've actually convinced this guy to sell me a bottle after they we're out of NOODLES on two of my visits....

Argh, I stumbled here after seeing your suggestion. Their grilled chicken banh mi looks killer (albeit I think my mind defaults to pork when I hear banh mi!). Will have to add this to the places to try before leaving!

Thanks for sharing this restaurant. I LOVE vietnamese food especially the beef noodle. I'll definitely try it with my husband. I would also recommend 越香蘭 with address at No. 305 Fuxing North Road (台北市松山區復興北路305號). They have great soup noodle and french bread.

Definitely not at this address anymore. I tried to go there today. :) FB page indicated they have moved.