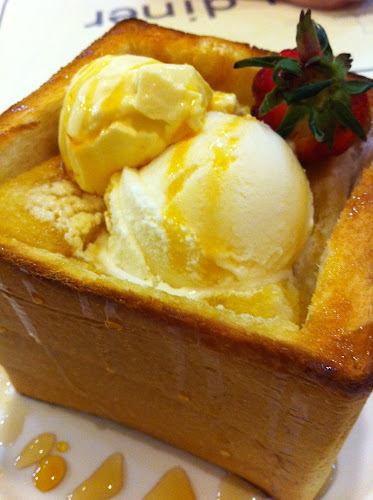 I swear the room fell silent when the honey toast (NT$180) came out from the kitchen. Maybe the other diners didn't see the new item on the seasonal menu, or maybe they didn't expect it to be big, or smell so good. Either way, the space in Fu Diner seemed to shrink even smaller when all eyes were on us as the heaping dessert floated towards our table. 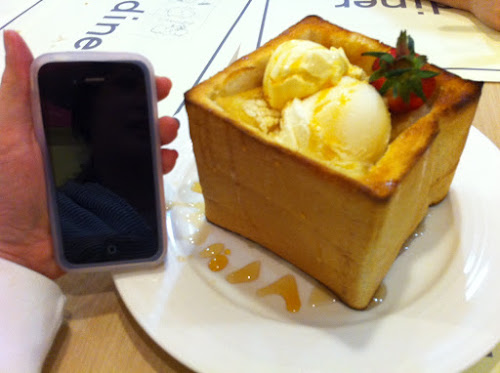 If you haven't heard of honey toast yet, imagine cubes of crunchy toast spread with honey, topped off with ice cream, pudding and more honey. The first time I had it was at Ichiza in Las Vegas a few years ago, and I haven't eaten it since. The popular place to get it now in Taipei is Dazzling Cafe, where you might spot a line of fashion forward girls waiting outside, but I haven't had the patience to try that out yet. 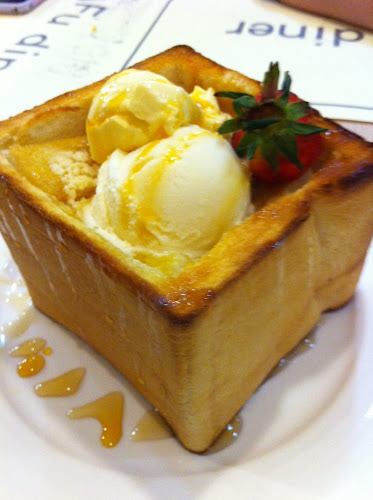 I wished there was a tad more ice cream to share, but we were sharing between four people while the other table was sharing between two. Also order it before you're done eating if you don't want to wait. We were there on a busy Sunday night and there was only one server running around and we were waiting after we were done because we didn't order dessert until the end. I also like the Indian curry omelette more than the chicken teriyaki omelette now, especially since the recipe seems to have changed since I've first had it.

erin: thanks for commenting! i know, i honey'd up some toast this morning to try to capture some of the same flavor. :)

Come on~ dazzling cafe isn't that difficult to get into.. :P Make a reservation or go around 8:30pm. Dazzling's honey toast looks prettier~ :\

That toast is insane! I don't know of any place in London that does toast like Taiwanese/Hong Kong places!

What beautiful pictures and great blog;)) cordially invite you to my blog, Kisses; **

Great blog; happy I found you!

this looks great and must be so yummy!

This looks so delicious! I love your blog, you always recommend the best places to try!

This looks absolutely fantastic! Thanks for sharing!

Hey me and my bf went to search for Fu Diner and sadly, it has closed down. =( We just went there on 17th May!