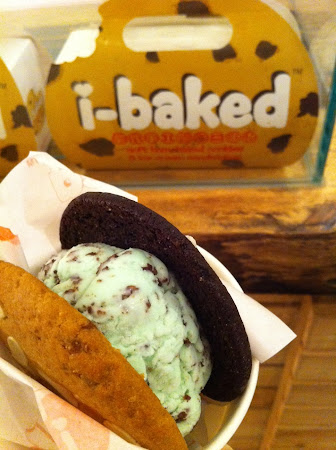 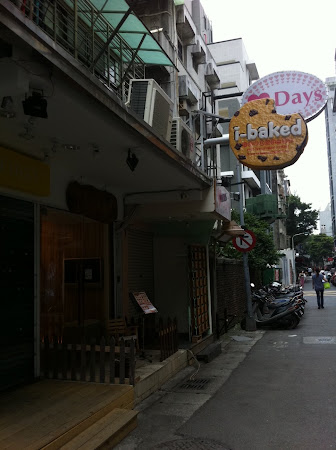 Ice cream cookie sandwiches in Taipei? I remember when I first started hearing the buzz about I-Baked last year, I thought- finally, someone did it. Because it's so dang hot in Taipei, it's what I'd want to eat when I'm not busy eating shaved ice. It might be fall in Taipei, but it's still humid and hot, even when it's pouring rain.

A cute little shop tucked in the alley near Shida Night Market, I-Baked was opened a little over a year ago filling a serious need for soft baked cookies in Taipei. You can pick up just one cookie or a dozen, or pick different cookies to build a ice cream cookie sandwich to eat. I'd heard about I-Baked since its opening and even had a friend gift me with some cookies in December, but I never had a chance to stop by the Shida store until now. 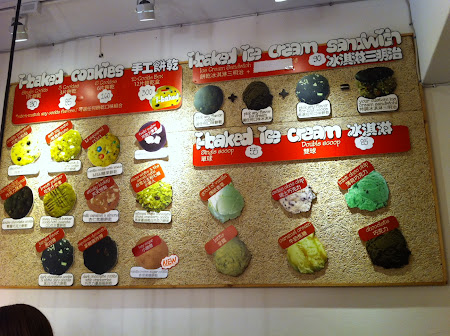 There's colorful displays and funny names for the cookies like "Jungle Fever" and "Snow White and the Seven Oats." There are chocolate cookies with chocolate chips, marshmallows or white chocolate chunks, caramel, peanut butter or candy cookies, and of course, the classic chocolate chip. Cookies are NT$30 each and slightly discounted when you buy 3, 6 or 12, which comes in a super cute box that looks like a giant cookie with a bite taken out of it. Ice cream cookie sandwiches are NT$90, with flavors like vanilla, latte, caramel cream, chocolate, mint chocolate chip or swiss chocolate chip. There's also some blondies and brownies available. 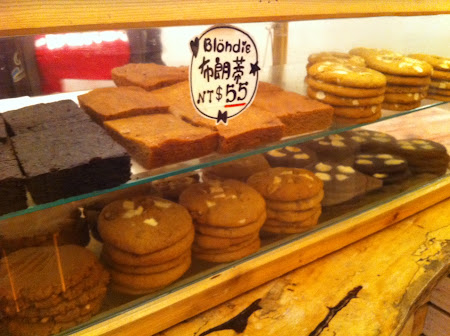 There's a small amount of area to sit and it wasn't crowded at all on a weekday afternoon, though I can imagine it being a hotspot during a hot summer weekend. Those who are in the know about local celebrities might recognize founder Ivy Hsu among the pictures of the cookies decorating the walls. Ivy writes on ivybaked.com that she's loved baking since she was little and when she first moved back to Taiwan in 2005 from the US (around the same time as I did! hehe), she'd bake cookies and share them with friends and some had never had soft homemade cookies before. 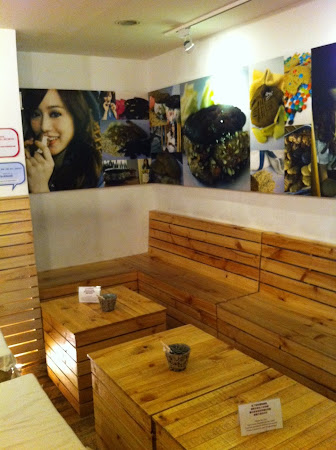 The cookies are soft baked which is surprisingly hard to find in Taipei, and while they hit the spot for a certain craving, the cookies were not sugary enough for my sweet tooth- perhaps catering to the local market. I also thought the cookies I tried that day were a tad dry. But I'm sure that I-Baked will satisfy a lot of people who are tired of the crunchy and crispy cookies prevalent in Taipei.

My favorite of the bunch was the new Chocolate Marshmallow and I also like Sticky Hicky, which has a melted toffee in the middle, so of course I had to make them into a sandwich with mint chocolate chip. At NT$90, it's not cheap, but a good price considering that just a scoop of ice cream at any of popular Haagen-Moven-Baskin-Coldstone's shops will cost you around NT$100. 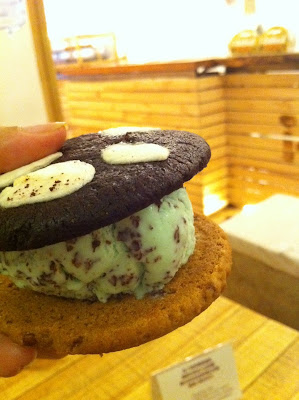 A good web site with exciting content, that is what I need. Thanks for making this web site, and I’ll be visiting again. Do you do newsletters? I Cant find it.

I usually get a triumvirate of Napoleon Dynamite, Chocoholic Anonymous and Cookie Monster. Mmmmmm... :)