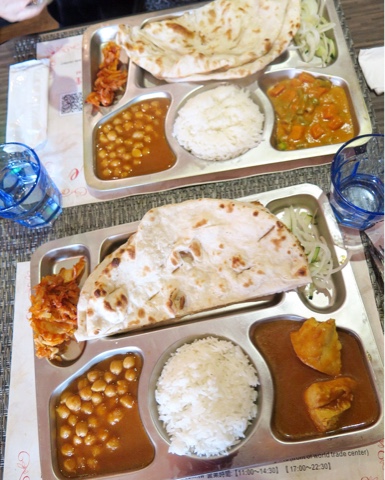 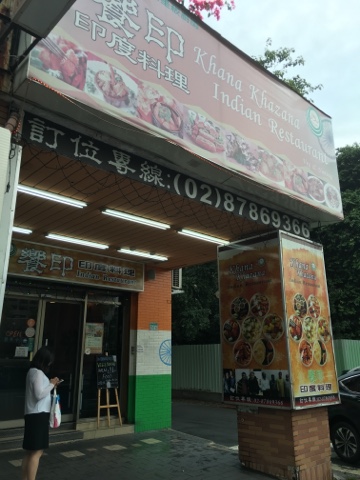 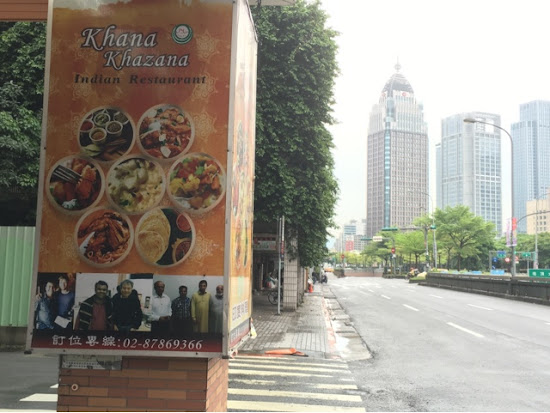 It's been a while since I've been to Khana Khazana, but I've been wanting to retry their lunch sets.  They are one of the few Indian restaurants in Taipei offering lunch sets under NT$200, as well as a halal menu. It's not very far from the original branch of Mayur's Indian Kitchen, also on Keelung Road, across from Grand Hyatt Taipei. You can see the bright orange sign when you are approaching, and huge photos of the owner with Ang Lee, who shot Life of Pi in Taiwan.

Inside is decorated with jewel colored tones, Khana Khazana seat about 40 people, but I've never seen it very crowded in the handful of visits I've gone over the past few years. The menu is sprawling and varied, but what sets Khana Khazana apart is their business lunch set menu. Good options for vegetarians with over 20 vegetable dishes on the menu. 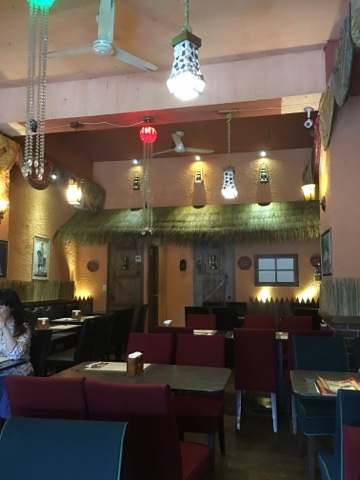 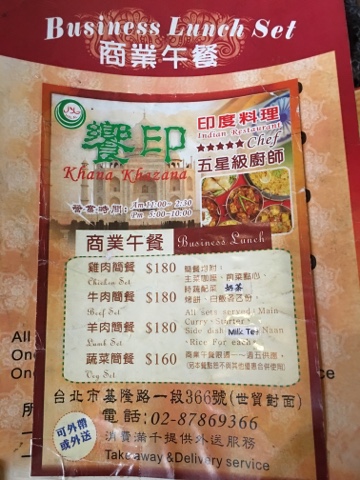 The set comes with a curry, chickpeas, pakora, rice and naan. Chicken set is NT$180 and vegetarian set is NT$160. Beef and lamb are also available. I had good impressions of the vegetarian lunch set as well as the chicken tikka wrap from the last time I went, so lunch with mom was a good excuse to go back. Thanks to my instagram to remind me what I thought back then in 2014. 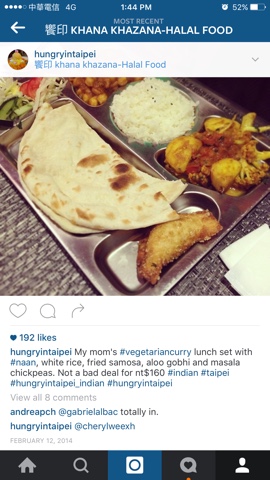 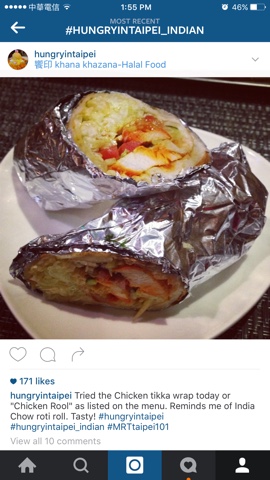 I decided to get the chicken set, even though in the past I haven't had the best of luck with lunch sets in Taipei. Usually it's a watered down, cheaper version of their regular food, especially for the meat curries because they have to sell it such a low price. But I wouldn't know until I tried it. I was debating on whether or not to add a butter chicken to my order, but the server (owner?) dissuaded me, telling me that the set would be filling for one person. (Little did he know who he was talking to! Lol!) 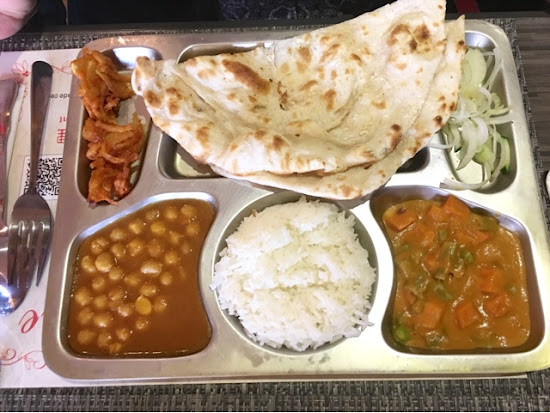 The sets came out fairly quickly and were slightly different than my last visit. Instead of aloo gohbi, this time it was a vegetable curry for my mom; the salad was instead chopped onions and the hot fried samosa type dumpling was instead pakora. 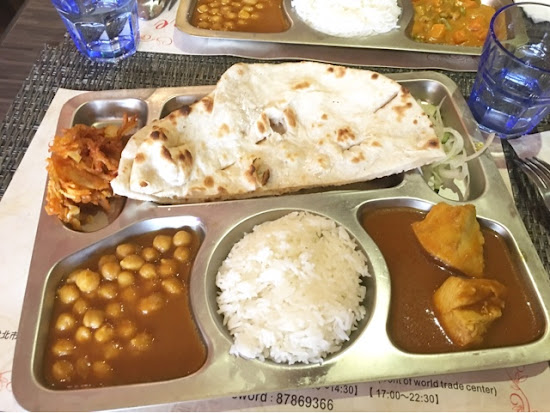 The good? You really do get a lot of variety for the lunch price since meals at many Indian restaurants can add up since they are portioned and priced to share. The naan was great, and more chewy than I recall than at other places.


The bad? My mom disliked that the pakoras (fried onions) were not served hot and the chickpeas were a bit sour (is that typical?). She also disliked how big and thick the samosas were, although I had no problem with it. I told her that usually people like it when they are getting a big portion for the price. Lol.

Samosas (NT$90 for 2) stuffed with curried potatoes and peas. meat option available too. I liked the samosas as they are similar to the ones I've had in the states, but it's very filling. 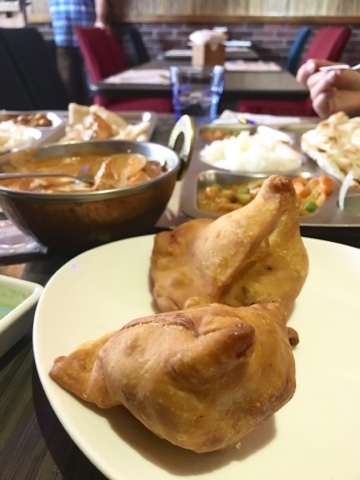 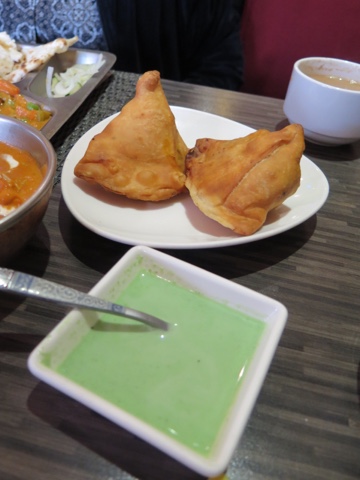 When the food came, I still ended up having to add an ala carte butter chicken since the chicken in the set was a bit bland, being chicken breast, and not tandoori chicken, and there were only two pieces. Come on, I needed the butter chicken curry to dip my naan in and be satisfied! Of course, altogether it ended up being too much to finish, (along with adding the samosas), but I packed leftovers to go for later. 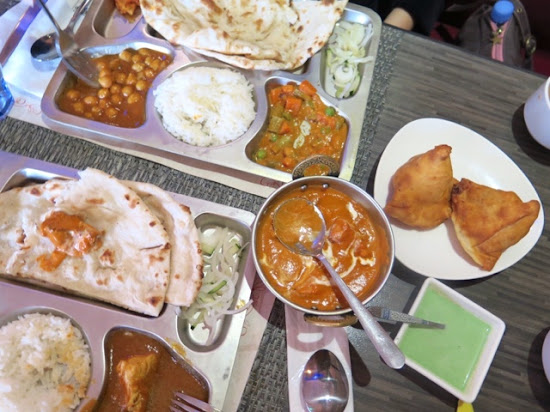 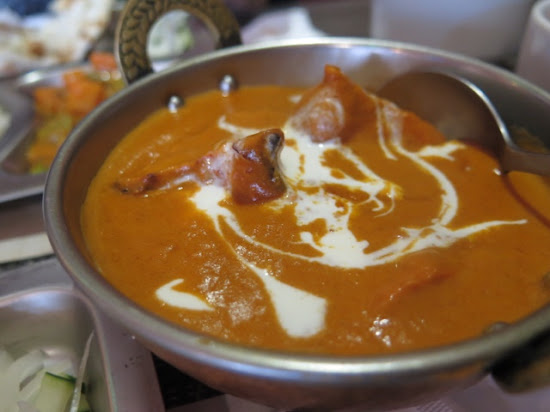 In the future, I'd probably share veggie lunch set with my mom (neither of us finished the naan) and add butter chicken (NT$350). I wouldn't mind getting the chicken tikka wrap again, or inviting a bigger group of friends to share more dishes.

In terms of how Khana Khazana ranks with other Indian restaurants, I think Balle Balle and Saffron are still my favorites, along with Joseph's Bistro. I do want to try MIK 4ever (Mayur Indian Kitchen's buffet style restaurant). I wish one of the Indian restaurants in Taipei would figure out a way to do lunch set with choices-- so that I could opt for the butter chicken curry or whatever I wanted, add a side of veggies or two and choice of naan and rice, like they do in the states or Singapore, so it's portioned for one person, but charge a little more than they do for the lunch sets they have now. If it was good quality and portions, I wouldn't mind paying NT$250-400 for that. 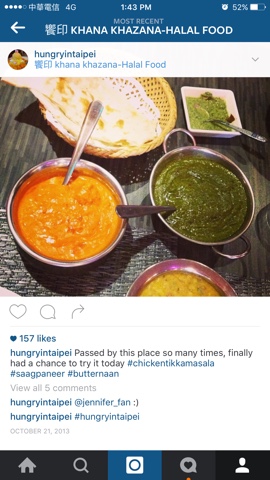 Hungry girl, come visit this place again. I think their sets are better than when you last went 8 years ago, lol. http://hungryintaipei.blogspot.tw/2008/02/indianfood-court-i-recommend-indian.html

Actually the owner is Pakistani and it's not authentic Indian food.