By chance, I got a heads up about today's In-N-Out pop up in Taipei and so I did a blurb on the blog yesterday and posted it on Facebook. And man, were you guys excited. 53K excited. Over 53,000 of you saw and shared the Facebook post and hundreds of people showed up at Goodies Cuisine this morning.

So many people were in line that I could even see the long line from the RenAi circle while I was going somewhere else. So I had to stop by and get some pictures since SO MANY of you guys were so crazy about it (and some pissed off that it was on a freakin' Thursday since you weren't about to ditch work or school for a burger. Even for In N Out). 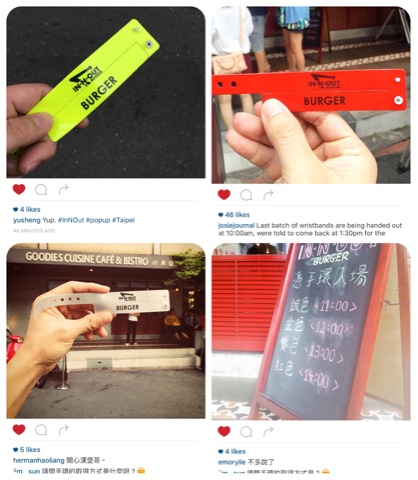 The In-N-Out event was advertised for 11AM, but the event manager told me that the people who got the first batch of wristbands had started lining up at 6AM. The last batch of wristbands were completely given out before 10AM. So people who showed up even an hour before the event started were out of luck. One wristband per person, one burger per wristband. Those who got their golden ticket wristbands in the morning and came back to wait in line to order and get their burgers around their designated time slot. Few brands could inspire such devotion-- if In N Out did ever open permanently here, odds are that there would be four hour plus waits like there were for Krispy Kreme when they first opened. 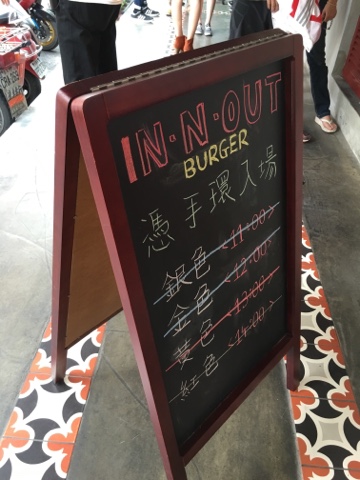 Today was a HOT day to be waiting in line around the block, but everyone seemed patient in their anticipation. In the 10 minutes I was there taking pictures, I overheard several people who dropped by being turned away by the In N Out door bouncer, since they did not show up early enough to get a wristband. 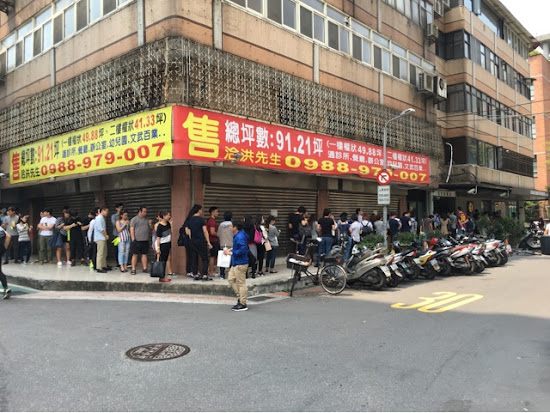 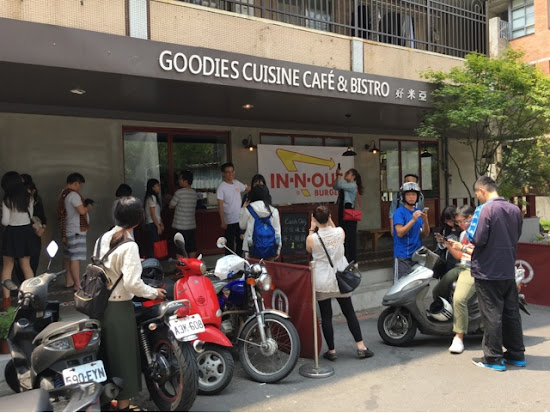 Without a wristband I couldn't go inside, but I grabbed these shots through the glass door at the front. The bright red and white menu should look familiar to anyone who has been to In N Out and they even offered to do burgers "Animal Style" or "Protein Style," (both phrases I believe they have trademarked.) Prices are extremely reasonable-- NT$100 for a double double, NT$160 for a double double combo-- although they couldn't do the In N Out fresh french fries here and served potato chips instead. I feel like even the casual burgers here are not that cheap considering the prices --Burger and Co is NT$180 for a cheeseburger, Burger Ray is NT$195, Burger Fix is NT$185, Bing is NT$300 cheeseburger with fries, 1885 Burger is NT$195 with fries, Diner NT$310 cheeseburger with fries (approximate prices). Of course, you can't price it too cheaply, otherwise you'll go out of business, even if the food is good ie Burger Stop. 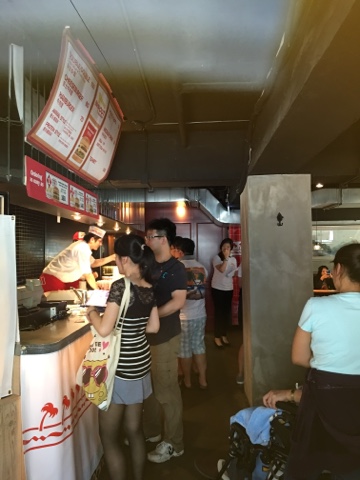 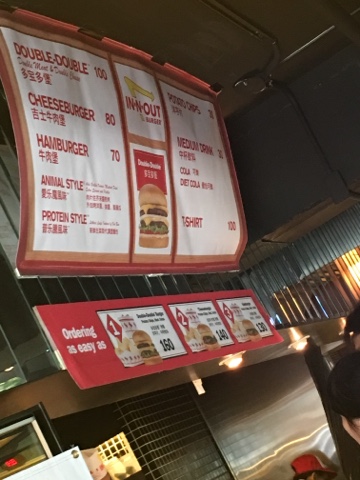 Why does In N Out do these seemingly random surprise pop ups in Asia on the other side of the world? The last few years has seen In N Out pop ups in Manila, Sydney, Hong Kong, Singapore and even London.  In N Out says it's to "promote and expand their brand and determine the best way to continue reaching customers around the world" (as they stated in their response to my Facebook inquiry about the event's authenticity on In N Out's official Facebook page) but essentially they are peeing on their territory, ie their trademarks, outside of the US. They want people in Asia who have never heard of In N Out, much less tasted it, to see this frenzy and know they are the OG and the real deal.   Raise false hopes that one day there might be a permanent In N Out in Taiwan, so that copycats can't try to use their trademarked menu names like "Animal Style" and "Double Double" without a fight. You can thank Caliburger for that.

So did any of you get a burger today? Where are you going to get your burger cravings satisfied until your next trip to California? My unofficial poll on instagram showed a lot of love for Burger Ray, and runner up, Burger and Co.  I guess I know what my next post should be!

The Burger Stop didn't go out of business due to low prices, they went out of business because the landlord wanted to double the rent, so the owner decided to call it a day.