chinese: i recommend THE GUEST HOUSE 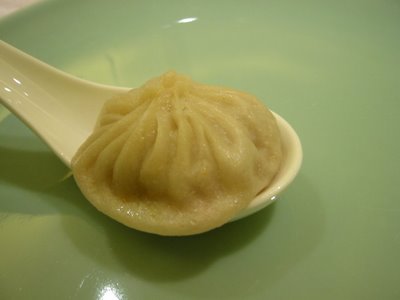 A family friend invited us out to dinner last night at THE GUEST HOUSE where one of their specialties is Steamed Pork Dumplings or Xiao Long Bao. As their website states, they feature Szechwan and Yang Zhou cuisine in its "chic modern" atmosphere that is modern and classical at the same time. Located on the 17th floor of the Sheraton Taipei hotel, THE GUEST HOUSE features an open kitchen with a glass window that you can watch them make your meal. While the 18th floor features a number of private rooms if you want to have your own space for larger groups, the atmosphere of the 17th floor is actually a lot more inspired and fun. 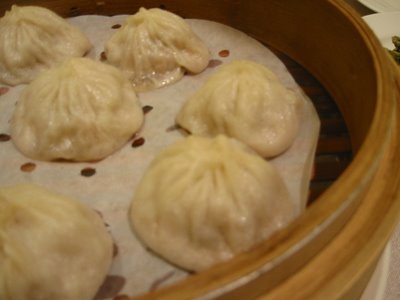 The xiao long bao were good. The skin held in the pork and broth until you stuffed the dumpling into your mouth. Since I had just eaten at Din Tai Fung for lunch, I could hold a slight comparison and I think I still like Din Tai Fung's dumplings better. 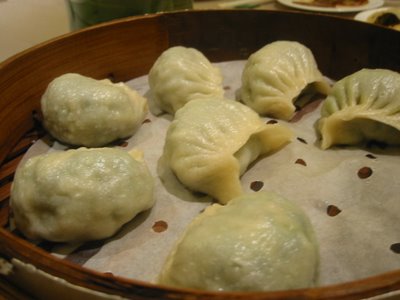 The vegetable dumplings were also really good, with minced vegetable, tofu and mushrooms inside. They are slightly drier than the pork dumplings, but still disappeared very quickly. 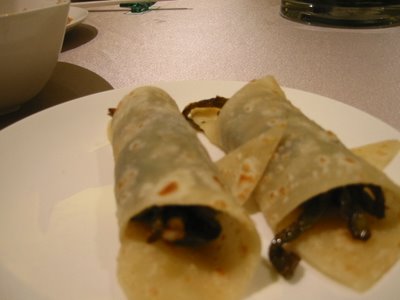 A few of their unique dishes include Braised Green Beans wrapped in Pancake and Braised Noodle with Yellow Fish Broth. I suppose sort of a vegetarian variation on Moo Shu Pork, the braised green beans were very soft and flavorful, while the pancake was delicious! I found the green beans to be a tad salty, but I could probably eat a stack of the soft, yet slightly crispy thin pancake. I found the braised noodle to be so-so, while the broth was mysteriously good with a seafood stock flavor without being fishy. We also had a beef braised in soup that was very very tender and flavorful without being mushy or dried out. 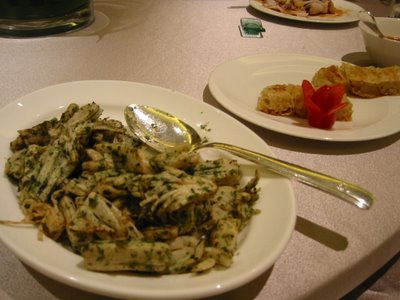 There were also other assorted small plates of eats on the lazy susan that I didn't get the names of. There was one dish of bamboo (I think!)(pictured above) and another of boiled pork with a spicy sauce that I quite liked.

After dinner, we walked around the hotel, I spotted quite a number of other restaurants that I want to try, including Pizza Pub and Sukhothai. The Sheraton Taipei is quite a nice hotel with all the rooms overlooking the center atrium, and glass elevators to see buffet located on the lobby floor. I heard that it went under major renovations the last few years, and is a lot nicer than Sheratons I've stayed at in the states!

Speaking of Xiao Long Bao, for lunch we dropped by DIN TAI FUNG and I have never seen it so packed! I suppose it's because I've also gone there off-peak hours on weeknights. It was Sunday lunchtime, and every single table was occupied as well as a line of at least 30 people outside waiting in intermitting downpouring rain. While I like their pork dumplings, I think I like their dessert red bean dumplings even more! 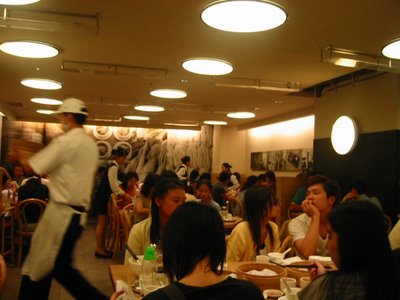 my lunch in a packed house at Ding Tai Fung

So if you don't want to wait in the rain for an hour for a table at Din Tai Fung, you can give The Guest House a try.
Posted by joanh at 11:35 AM

mmm...this post makes me hungry! the skin on those babies look terribly yummy *mouthwatering*! wish i weren't too lazy to whip-up my own dumplings.

I just arrived from Singapore to Taipei.

Your site rocks, will definitely check out the places you've mentioned.

Cat- wow if you could make your own dumplings, you should totally open a place in LA!

Peter- awesome! hope you come back and let us know your thoughts about the places you visit!

Thanks to the entries here, I know what to do for the weekend =)

Do you have any "must try" recommendations for me?

My colleagues back home asked me to look for 'tie dan' (metal egg?). I think I have to go to danshui to look for them.

Have a nice weekend =)

peter- i guess it depends on what you feel like.. some people feel that Din Tai Fung is the place you should go if you are visiting and don't have a lot of time.. their dumplings are very reliable. Moga and VVG are good for fusion type food that are on the pricey side with uneven service but tasty. Shin Yeh (which I will review soon) is all Taiwanese specialties. You should definitely go to the night market too!

Really like the blog. Great reviews. I went to the Guest House last week and I was really impressed by their xiao long bao. I love the xiao long bao at Ding Tai Feng but I would say the one's at the Guest House are equally good. The other things we ordered were excellent as well.

wayne: welcome to the blog! thanks! glad you liked Guest House.. haven't been in awhile, but thought it was pretty good when I went.

wayne: welcome to the blog! thanks! glad you liked Guest House.. haven't been in awhile, but thought it was pretty good when I went.