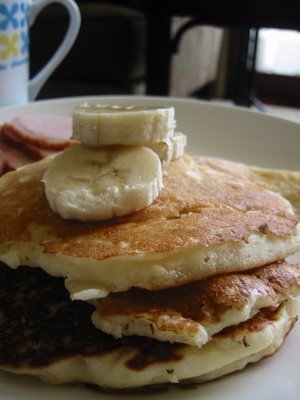 A few weeks ago, I was craving french toast and tried a couple times to get it at NY Bagel. The first time, we went at noon, but it turned out they stopped serving breakfast on weekdays at 11;30am. Seeing all the people around me enjoying their brunches just made it worse, so I left and had cereal at home.

A few days later, I dropped by on Sunday. It was packed and I didn't want to wait 20-30 minutes, so I wanted to do take-out. Except I discovered that their take-out doesn't include breakfast. After debating with the cashier for awhile,

THEM: it's a lot of food. We don't have the right to-go containers. We have to maintain our brand-level freshness. Your eggs might break on way home. blah blah blah BLAH.

I even talked to the manager.

ME: I just want some french toast. I'll go home and make my own eggs. I promise it will be fresh when I eat it. You can put it in the container that I know you have for the steak sandwich.

MANAGER: If we make an exception for you, then other customers will complain.

ME: If it's in a box and then in a bag, who is going to know? I live right next door. It will be eaten right away!

She disappeared for awhile and then came back saying no. UGH! It was very very annoying. After being too lazy to make my own french toast, it turned out that it would have been less of a hassle to do so.

Annoyed enough that since then, I have held an unofficial ban on NY Bagel, making my own pancakes and waffles at home. Breakfast is one of my favorite meals of the day to make- mushroom omelettes, banana pancakes or crispy waffles with sausages on the side. It's probably a good skill to have since finding quick and good American style breakfast is tough in Taiwan. 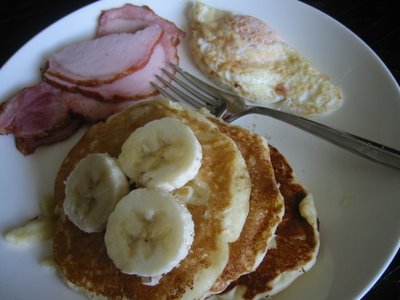 On this day, I made a small stack of banana pancakes (from Betty Crocker Buttermilk mix and fresh bananas- not gourmet- I know, but quite quick, easy and tasty), with an egg over easy and some canadian bacon lightly grilled. Mmmm.
Posted by joanh at 11:09 PM

WOW!! I want a plate of this. Can we order take-out. And don't give me no "we don't have the right containers, the eggs might break, or no specials for you or my other customers will complain" crap!!
This looks great. I too, love breakfast!

hahah. You are going to become hungry browsing food blogs at midnight like I do...

I can definitely make you guys breakfast sometime! :) If the eggs break, you'll just have to eat them that way. *sigh

Joanh's Kitchen is looking good! ;) How's the produce in Tai-pei these days? Is it hard to get the kinds of ingredients you would crave in an American breakfast?

wow! those pancakes look delicious! real thick and fluffy! You definitely wouldn't have gotten a better breakfast at NY Bagel. I went the other day and I got a bagel, and saw other people with small looking breakfast plates. I really only saw sausage and toast, not something as drool worthy as this stack of banana pancakes!

hi catherine and chicken! thanks for the compliments!!

catherine- well, there are definitely more international supermarkets now than before.. Jason's at 101, CitySuper at Breeze, and Costco! But you definitely pay more for American brands, like Betty Crocker or Bisquick. Personally, I find it hard to find stuff like arugula or fresh basil. I know it's around, but I guess I have to look. The canadian ham and eggs are from Costco!

chicken- yeah.. I've had the pancakes at NY Bagel and they were quite disappointing.. too dense and not fluffy. the McDonalds pancakes are okay if you are lazy.. but freshly made pancakes definitely fulfills my cravings the best!

December 5, 2011
I ran across this site while looking for "Taipei pancakes". Even though I just ate and your pictures are 2 years old that plate really looks GOOD!!