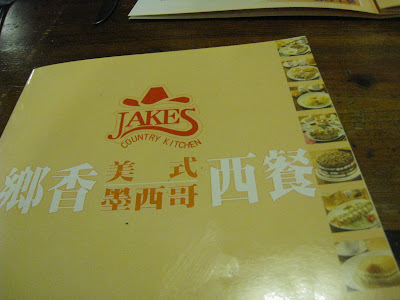 website: jakes.network.com.tw Chinese only, though online menu has English. 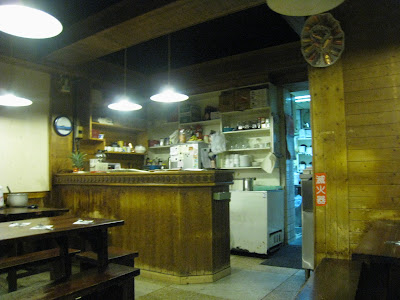 I visited Jake's Country Kitchen all the way back in February with high hopes for good Mexican food. While I admire how Jake's has been around town for such a long time and I could see how it was a destination when there were few Western restaurants in town, I was a bit disappointed. Maybe it's because I'd heard about it for so long and it's so far away from where I live that I held it to a higher standard.

Jake's does have a large variety of offerings on their English and Chinese menu- all day breakfast omelettes, pancakes with sides like corn beef hash; burgers, pasta, pizza, fried chicken, dinner plates like turkey with mashed potatoes; Mexican offerings like chicken mole, burritos, enchiladas, chimichangas and flautas, and slices of pies and whole pies to go. Their servers crowded behind the counter and in the kitchen and would pop over occasionally to give us food. The songs from the 80s and 90s playing also gives the place a whole throwback feeling that you could imagine it being around for almost 30 years. 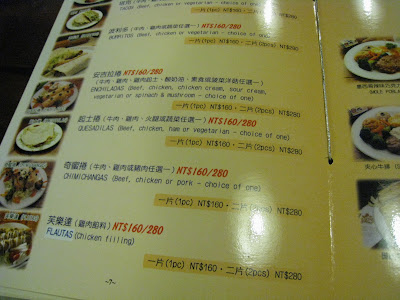 The nachos were just chips with melted cheese (not enough of it) and the guacamole/salsa wasn't fresh and piled on like I'd hoped. It looked and tasted like when I tried to melt jack cheese on some Tostitos at home in the microwave. 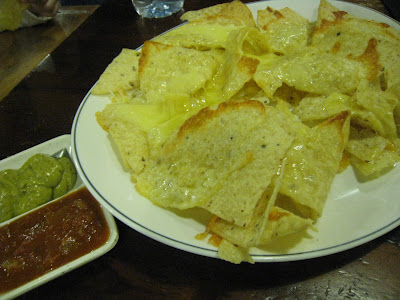 The burger (NT$115) was ala carte, but it was a pretty decent burger- served super hot, good size proportion to the bun, fresh fat slice of tomato and lettuce. 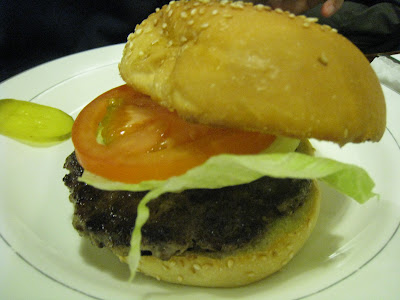 The open faced turkey sandwich with mashed potatoes and gravy (NT$250) was better than I thought it would be. It was hearty and filling and the gravy is more like country gravy than brown gravy. It could be a great alternative to a fancy turkey dinner around Thanksgiving if you don't want to slave in the kitchen. Or anytime you just felt like some serotonin from the turkey. 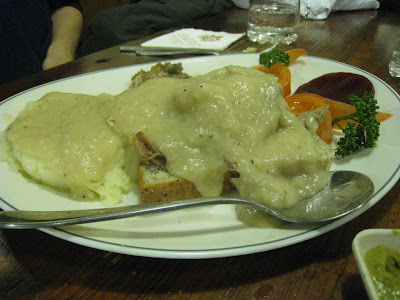 I got a Chimilada which was a Chimichanga Enchilada combo plate (NT$300). The enchilada fared better than the nachos with its cheese quota, but there wasn't enough sauce. The whole point of ordering an enchilada rather than a burrito or chimichanga is that it's soaked in the sauce and the corn tortilla soaks it all up. At Jake's (like many Taiwan eateries), you could barely tell which is the enchilada and which is the chimichanga (NT$160-280 ala carte). 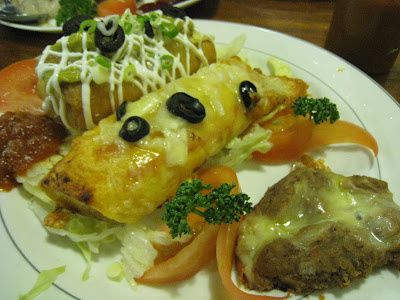 I could have also done without all the sauce on top of the food and rather had it scooped on the side. The refried beans were also rock hard and I didn't bother with trying to eat it. The problem with eating Taiwan-ified Mexican food is that it just makes you long for the real thing even more. 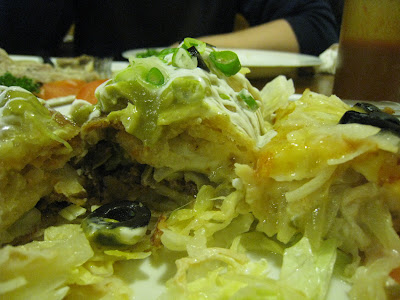 The milkshake again was okay, and it was smaller than expected for the price. 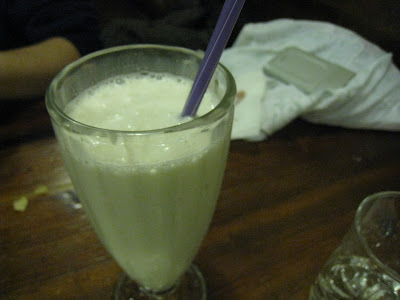 I was so excited to see Lemon Meringue pie on the menu, but it turned out they were out that day. So instead we opted for Strawberry Cheesecake. I love cheesecake. But this was weird cheesecake. It had little fiberous textures inside the cheesecake that was not strawberry-like. It was very off-putting and made me not want to finish it. 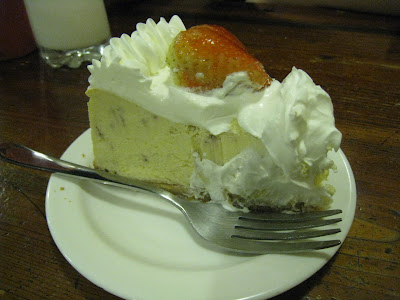 The dessert menu itself does offer a huge array of pies, but they only had a few cheesecakes to offer that night. So you'd have to call in ahead to check if they had what you wanted, or order ahead if you wanted to take it home.

I'm curious to know if their breakfast/brunch menu is better, although with options like The Diner now closer to me, I don't know if I'll make the trip to find out.

Maybe for the pie.... Anyone been to Jake's Country Kitchen?

Like you, I went to Jake's with high expectations...I think it's because all the tourist guides hype it up, but maybe because their information is dated, from before so many other (better) American breakfast places opened.

We've only had the breakfast at Jake's. It was okay, but like you said, kind of underwhelming. Not really worth a trip if you don't live in Tienmu!

hey abstractpoet: glad to see you are still reading occasionally! :) I agree. I think it's because their info is dated.. I can definitely imagine it being an oasis before all the other Western eateries popped up, but times have changed.

I've been there once and was disappointed. The beef they offered was rough. But my bf said their breakfast is better.

In the late 80s/early 90s, Jake's Country Kitchen was awesome! Now it's a sad, pale shadow of its former self.

Eddy, of Eddy Burrito in Danshui, has opened a sit-down restaurant in Danshui. I haven't been there yet but saw a write up on it in this month's Taipei Walker.

orangesoda: hmm, maybe i'll have to try their breakfast someday

faye fly: hi! thanks for commenting

mmm.. these are top most delicious item. I love very much burger and sandwich. I would like to eat now.

I went there 2 weeks ago. My friends got mexican combo plates, and their burritos/enchiladas/chimis were surrounded by lettuce, tomatoes, salsa, refried beans, etc. It looked good and filling. When my burrito came, I was disappointed to see it only came with lettuce - the plate looked ridiculously empty next to theirs. I kept my eye on dessert and was extremely pleased with the tiramisu cheesecake. It was rich and creamy as a cheesecake should be, with all the nice flavors of tiramisu. We then ordered another cheesecake slice (was it mocha or marble or something else?)...and it was disgusting. It tasted like a gelatin no bake cheesecake - with a really funny texture much closer to pudding.

Overall, nothing to rave about, but I would go back for the Tiramisu Cheesecake

5 years ago, this was a destination restaurant: nearly the only mexican food or western breakfast available in Taipei! Times have changed, and while Jake's has remained the same, the new places are outshining it. Poor Jake.

I lived in Taiwan from 1999-2004. There was a Jakes Urban Kitchen in Taipei run by Al, who was Jakes son-in law and Jakes daughter. I usually had the beef enchiladas, which were nothing like enchiladas in Texas, but it was tasty anyways. Anyone know if it is still open?