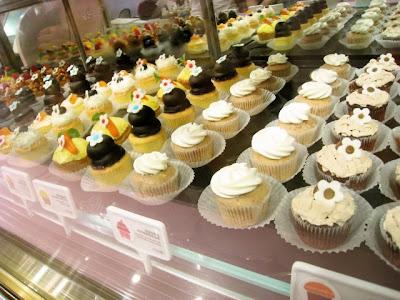 Kid friendliness: no high chairs. displays of candy and sweets everywhere- be prepared to buy something for the kids unless they have no sweet tooth! 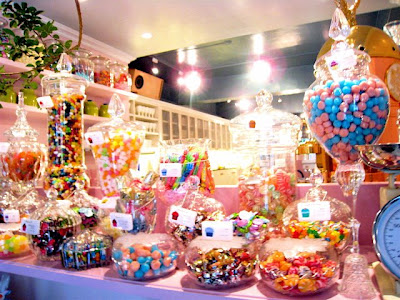 Dining in VVG Bon Bon is like dining in a girly candy store, with its pink walls, glass containers filled with various kinds of candy and rows of cupcakes and sweets to tempt you with. A fantasyland for the 10 year old girl in you or the place not to go when you have a dentist appointment the next day.

I went with three friends for a brunch meeting and it was pretty full at VVG Table- and the waiter suggested we check out their newly opened and nearby third venue- VVG Bon Bon. From the moment you see the entrance, with doors painted purple and white, it's like entering a wonderland far away from the busy streets of Taipei. 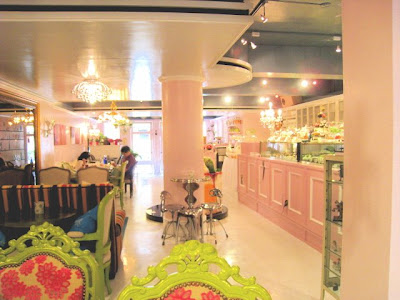 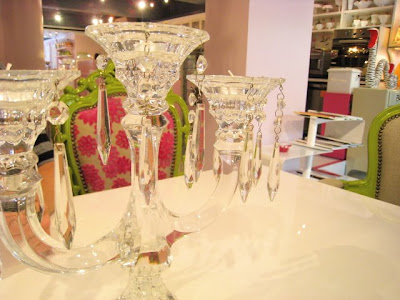 There's even a self-serve cotton candy machine and frosted sugar cookies on top of the counters. They should totally give out free cotton candy to people as they leave, as one waiter did for us at Simon in Las Vegas. The restaurant pays only for the sugar and gets the result of the giddy squeals of happiness of the customers who have totally reverted into their childhoods- and word of mouth. 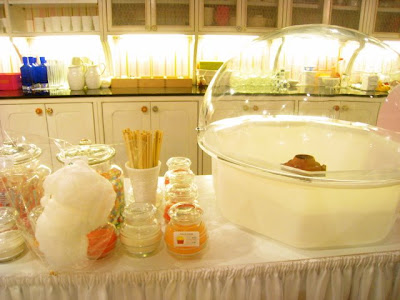 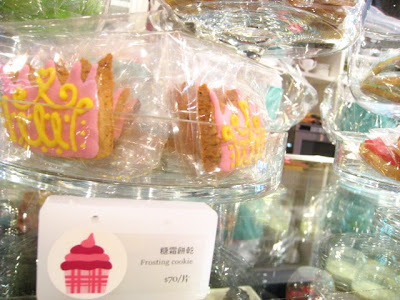 For first impressions, VVG Bon Bon does a great job. Even their business card is eye-catching cuteness, with rows of cupcakes adorning the restaurant's name. 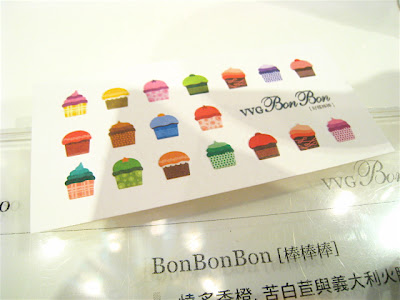 A perfect place to meet friends for afternoon tea or brunch, or maybe to host a baby shower or birthday. They have 4 set menus on their clear plastic menu, all including a cupcake and raspberry soda drink for NT$580. The menu combos looked promising, but ultimately were all much smaller in portions than I expected for the price. 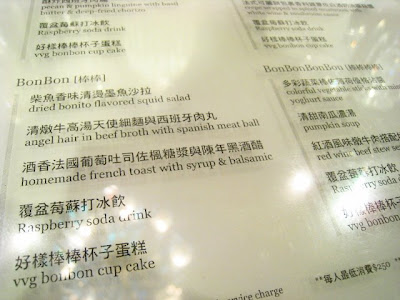 We all ended up ordering different things so I got to eye (and taste) the different meals. The most filling is probably the Bon Bon Bon Bon with the red wine beef stew. 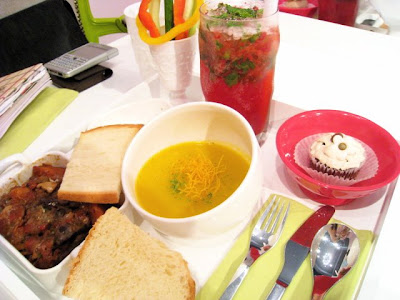 Second most filling is the Bon Bon set with the angel hair noodle soup and french toast. I thought the french toast would be the main feature of the set, but it's actually the noodle soup. 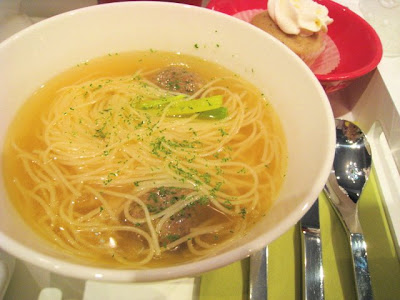 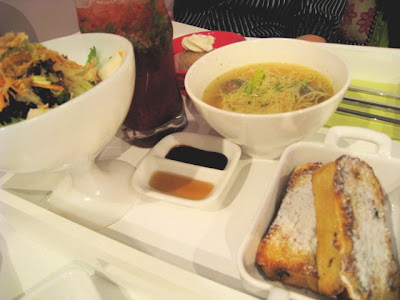 I chose the crepes (the Bon Bon Bon) since I thought that wouldn't be too heavy. It was TINY. I suppose you could still call it a crepe, but I guess I was envisioning Mamm Goz sized crepes. 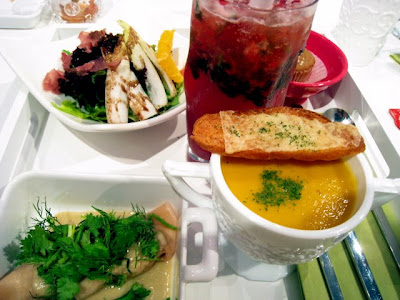 After picking all the dill off of the crepe and eating it in two bites, I traded it with my friend for some of his angel hair soup. I hoped my own soup and salad would fill me up. 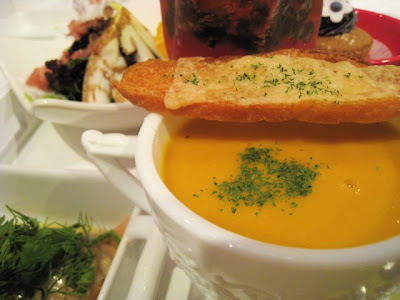 The hungry look on my face was probably evident, since everyone offered some of their dish to me. When some guy friends mentioned to me that they liked VVG Bon Bon, I was surprised. I asked, Really? You were full from one set? and the response was, Are you ever full eating at VVG? And I guess it's true- VVG's standard presentation is always beautiful, delicate, but the food never makes you 100 percent full.

The same with their cupcakes. The waitress brought them over with the set and explained what they were in Chinese, so I didn't catch everything, but brought four different kinds for our four different sets. They were almost too cute to eat and at this visit, the exotic flavors like fig cupcake just left me wanting for something more traditional, like a cupcake from Ginjer. The thick frosting was more for show and not taste and the cupcake was dense - there should have been more fluffiness and air in both the frosting and cake. 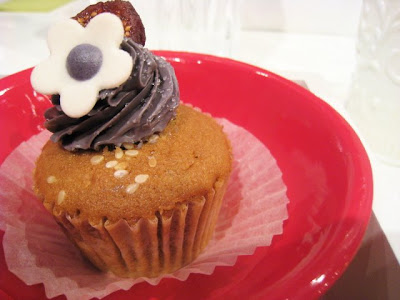 It should be joyful to eat a cupcake, but in this case it was work. It makes me sad when I don't even want to finish the cupcake. 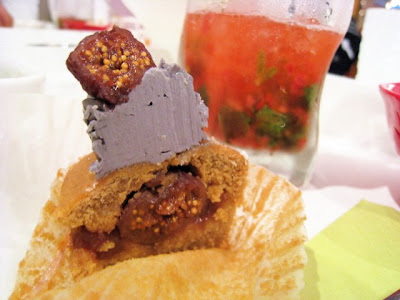 If I were to go again, maybe I would request to choose my own cupcake. That might make for more happy pairings with the cupcakes and the customers who are going to eat them.

I have been mulling over this review for a long time- for over four months- and VVG Bon Bon isn't so new anymore and I wonder if their menu has changed. The flavors could satisfy any gourmet, but the portions for the price you are paying is just a big factor in a city where you could order a table full of delicious things for the same amount of money which is almost US$18. For that price, I'd rather wander over to Nonzero which has definitely stepped up its game since I reviewed it last year, or L'Idiot which serves a pretty decent brunch and even better set lunch menu.

But in any case, I've never seen anyplace like VVG Bon Bon, and it's definitely something to see in person. The food should be better than the equally pink and girly Hello Kitty Sweets or a great place to browse if you are picking up favors for your latest party.

so cute!
i miss taiwan, its food, its culture. really envy you.
anyway, can you help me??
here are some picture links *cakes, tea*, i found them on a blog.
maybe you know where they are sold.

hi 菱: thanks for reading and commenting! none of the ones you posted looked familiar.. are you sure they are from taiwan, or are they from china? you might have better luck asking the person who wrote the blog you found them from! :)