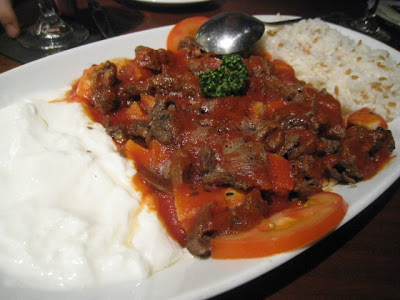 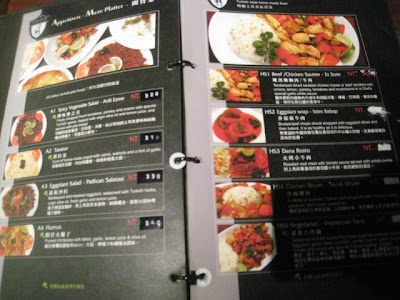 If it's first impressions, Truva gave us great first impressions. The waitress (and owner?) patiently went through the extensive menu with us, explaining different things and making recommendations. The restaurant was smaller than I expected, but elegantly designed with rich colors and a prominent bar. The restaurant was nearly empty when we arrived for dinner, but it gave us a more private feeling. 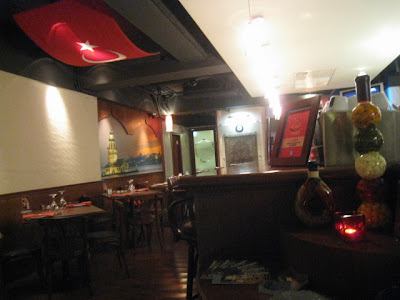 But if it's last impressions, well, let me know what you think. Some reviews I had read about Truva complained about the bottled water charge (that they serve bottled water without asking and then you are charged for it), so I was prepared for that- it's pretty common in a lot of the nicer restaurants in town (and nothing could be worse than the one time my friends and I ended up paying US$40 for just Fuji bottled water in Vegas when we didn't know we were getting charged by the bottle rather than by the person).

Instead, I happened to catch multiple charges for pita bread on the bill (it was complimentary as part of the appetizer as well as the shrimp dish) and the waitress apologized and looked like she was going to fix it. But then the owner came back and said something along the lines of, "I gave you extra pita bread with your appetizer. It usually comes with 1, but I gave you 3." 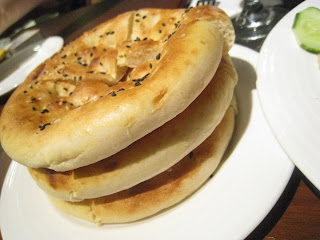 Ummm... Wait a second, if he gave it to us (rather than us requesting it) then isn't it a gift aka free of charge? I was a bit annoyed, but we paid the bill rather than debating with him. I had raised the point and he made his. It couldn't have been more than a NT$160 charge, but the more I thought about it, the more it bugged me. As you might remember, I don't like it when the restaurant "upsells" you with a smile without a heads up. Eventually it left a bad "aftertaste" in my experience on the meal and restaurant, which was too bad because there is some decent food at Truva. 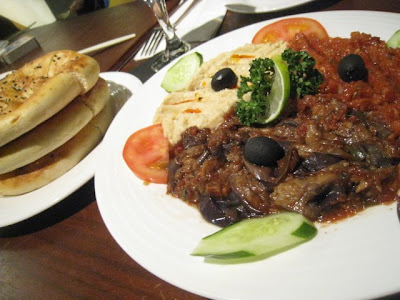 The pita bread in question was good. Turkish pita bread is different than pocket pita bread that you might picture from the more familiar Greek pita bread or pita sandwiches. It was soft and chewy and went well with the mixed dip plate that we got with creamy hummus, eggplant (mashed and grilled) and spicy vegetable salad (with tomato, onion and parsley).

If I had to do it over again, I wouldn't order the mixed pita(NT$560) and the baked shrimp casserole(NT$620)- both were overpriced for what you are getting. The mixed pita was the least favorite of the table, a bit dry and bland with an overcooked egg. 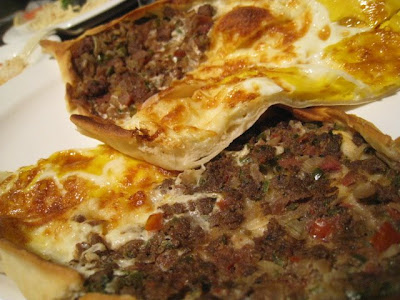 And the shrimp in the casserole seemed to be frozen rather than fresh shrimp, and just too expensive for the portion. The sauce was a bit oily and the shrimp themselves didn't seem to have been marinated for long. 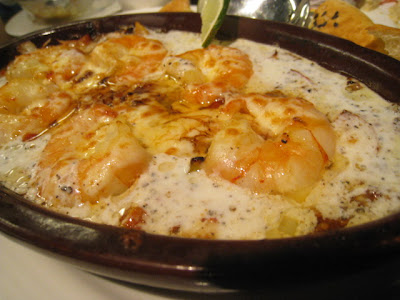 Instead, check out the mixed grill (NT$860) with turkish meatballs, lamb shish kebap, chicken shish and adana kebap with sides of rice pilaf and french fries. My favorite from this plate was the grilled chicken- it was the most tender and juicy. 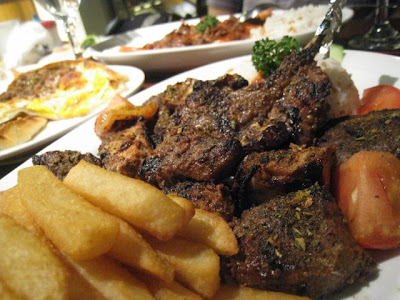 and the beef Iskender (NT$760) with slices of rotisserie grilled beef in a thick, sweet tomato paste sauce and huge portions of yogurt and pilaf on each side. This was a crowd pleaser at the table. 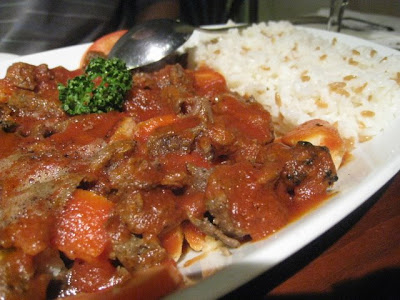 I think at one time maybe people would pay a premium for an "exotic" food like middle eastern or Turkish food. But now with the growth of the casual chains Doner Kebab and Sababa, I can get a filling and equally delicious entire meal and drinks for two or three people for the price of one entree from Truva.

I'd be curious to see how differently priced the lunch menu is- maybe there are some deals to found there? Otherwise, for the value of what we got, it's hard for me to see myself going back, with so many options to eat around town. But if you're looking for new place to romance a date or try something new like Turkish ice cream, the fine dining ambiance can definitely set the mood. 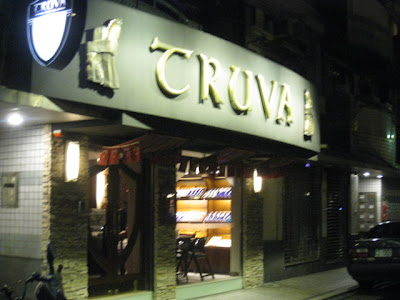 Email ThisBlogThis!Share to TwitterShare to FacebookShare to Pinterest
Labels: $$ depends on what you eat, $$$ special treat, area- Da An, CLOSED, mediterranean/middle eastern

i stumbled upon your blog and i love what you are doing! makes me drool :) keep it up!

That is a shame how the owner kinda cheated you guys. I'd never woulda thought Taipei would have Turkish food... Love seeing "out of place"(in my mind) restaurants you review!

The place isn't that great and the night I was there, we were the only two customers, yet the service was slow and as mentioned, we got charged for water that we thought were free, as it was just poured and served.
They managed to have run out of half of the stuff we wanted, the starter wasn't what we expected from reading the menu and they even managed to run out of fries, so we got some fairly crappy rice instead...
Having been to Turkey and Greece, the food in Truva is not at all authentic and despite the mixed grill being ok, it's a small portion which they suggest two people can share and it's just worth the money.
As much as I love Turkish food, I'm not going back...

cat k: thanks for stopping by and commenting!!

roger: yeah.. i love trying the "would never expected in taipei" restaurants too! but usually they are more expensive (for being special). thanks for still reading!

theLostSwede: thanks for sharing your experience. it never is a good sign when you walk in a restaurant and it's empty, so it's too bad that the owner doesn't realize or make changes to keep would-be returning customers.