not Taipei/LA: KOGI TACO and GET SHAVED TRUCKS 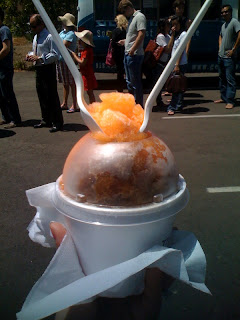 Mmmmm. I don't know why there isn't Hawaiian Shaved Ice in Taiwan, but it would be the perfect extension to the already popular top-it-with-anything shaved ice places in Taiwan. Sweet, fruity and colorful, I headed to the trucks at T-Lofts on Olympic after finding about Get Shaved's Shave Ice from twitter. 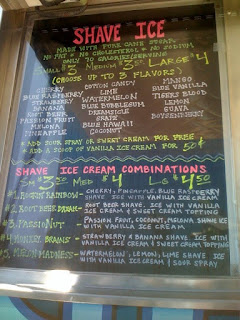 After looking at the extensive menu, I decided on Root Beer, Strawberry and Dreamsicle (Orange + Vanilla). I loved how the ice was finely shaved (rather than chunky) and the flavors were sweet but distinctive. It started to melt as we were waiting in line, so I had to eat it quickly. 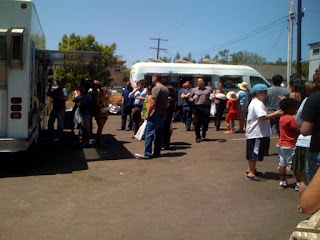 I had already eaten lunch so I was took a tiny bite of my friend's tacos. It was different than I expected- I thought the meat would be sweeter and there would be kimchi, like my own little experiment. Instead there was some spicy shredded lettuce atop of the diced and grilled meat. There was no sweet and savory combo. 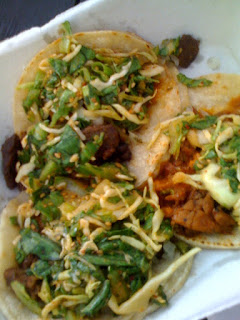 I think I'll stick to the carnitas and carne asada with guacamole that I've been craving when I'm not here since that's a lot harder to come by for me. But if you're still curious, you can find out where to line up for the Kogi tacos or Get Shaved by checking out them out on twitter: kogibbq or getshaved

A few days after this, I found out that Diddy Riese in Westwood also has shaved ice- and only for $1!! For $1.50 you can get it topped with ice cream or get an ice cream sandwich with two cookies. Mmmm

Unfortunately, I'm having trouble uploading pics from my camera to my computer... so until then, all pics are from my iPhone.
Posted by joanh at 5:16 AM

I friggin love Diddy Riese, but I didn't know they offered shaved ice. I should look out for that shaved ice truck in LA sometime :)

HOT DAMN that looks great! Now to drool over all the other posts I've missed...

I try asking for Hawaiian Shave Ice in San Francisco at Double Rainbow on Irving. It owned by Taiwanese. They have all kind of shaved ice but said to me "That sound so plain we don't that here". So I found out in Japantown they do make Hawaiian Shave Ice not fine ice but still good enough.

I love Diddy Riese, but it's been so long since I've been to Diddy Riese. I didn't know they have shaved ice now!

What a coincidence. I was at Diddy Riese that Friday for the first time. The ice cream sandwich with cookies seemed like a kid's idea, but very good, nevertheless.