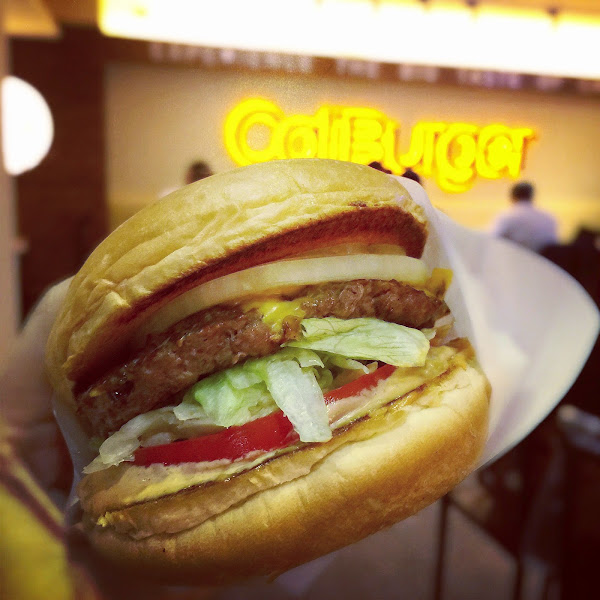 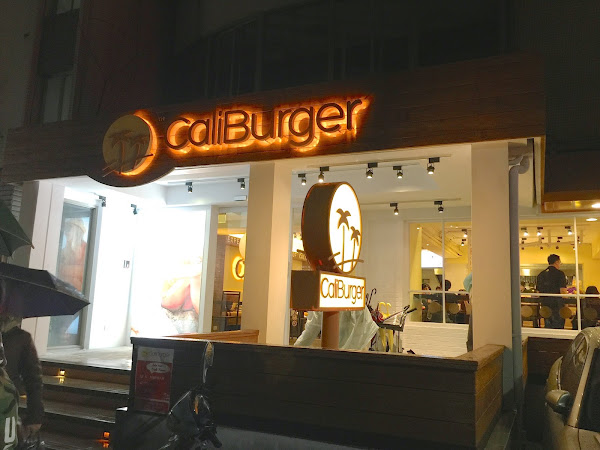 To the casual burger fan, Caliburger would appear to be very close to In N Out- the style of the burger, the fries, the dousing of thousand island dressing and cheese and onions, the palm trees and cherry red trays. But to those who grew up on In N Out, it might not satisfy completely- it might just make you long a little more for the real thing.

Caliburger took over the space from the previous Sanrio Cafe Kiko's Diner and kept most of the same seating format- except that it tore down the front register and moved it in front of the semi open kitchen. I went during its soft opening, when they were still training the staff and working out the flow in the kitchen, so our burgers took quite a long time. Thanks Caliburger for the sneak peek and the tasting- I know things will run smoother as your team gets more experience. 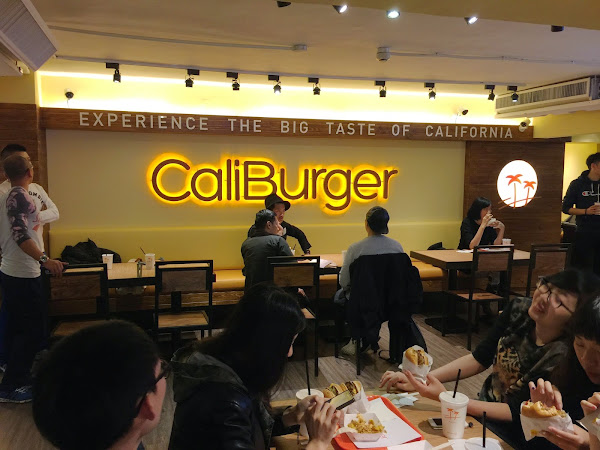 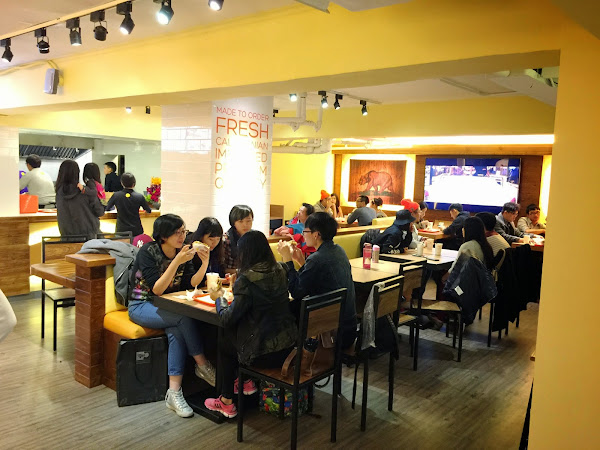 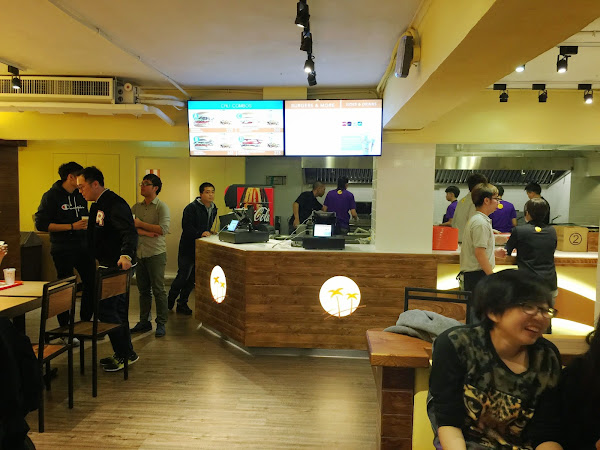 Though my meal was comped, the Cali Combos were slightly more expensive than I expected- NT$275 for a Caliburger (that's a cheeseburger), fries and drink, while a Calidouble combo bumps you up to NT$345. The burger alone costs NT$175 and the Calidouble is NT$245. Usually when I'm in LA at In N Out, I get just the burger and fries which according to current prices is US$2.10 and US$1.60, let's say with tax is around US$4. I think lower prices for a better-than-fast-food meal is one the things that makes In-N-Out a favorite in the states, besides its taste. With so many burger places now (and NT$80 bentos) in Taipei, Caliburger will need to keep its prices competitive. Even BLT Burger has already closed. Anyone else remember Burger Stop? They tried to bring double stack burger combos to Taipei for under NT$200. 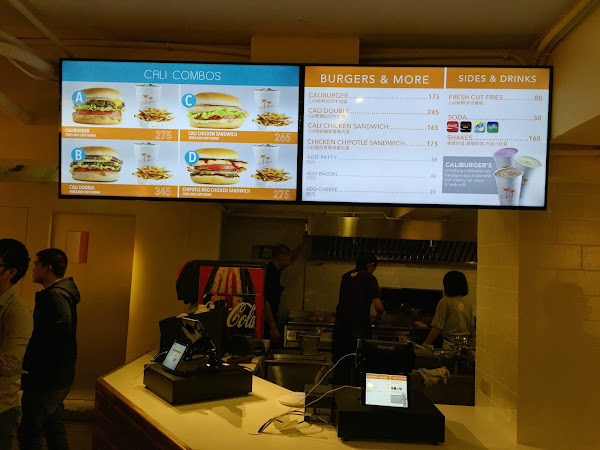 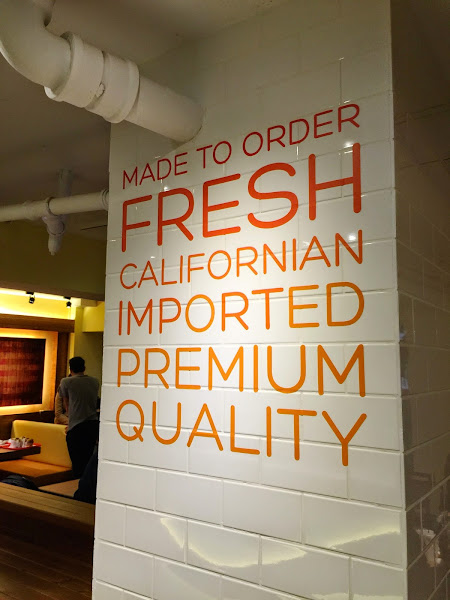 I'd never heard of Caliburger until In-N-Out did its one day pop up in Taipei (confirmed to be really In-N-Out via twitter), and I did research on what other pop ups they were doing outside of the US and why. Part of it is to protect their trademark which Caliburger stepped on when it marketed itself as having "double doubles"  and "animal style fries" when they opened its first store in Shanghai in 2012. The similarities to In-N-Out were not an accident- Caliburger's chef de cuisine Jonathan Wong was a manager at In-N-Out in Northern California and has said that "the model was In-N-Out."  In-N-Out caught wind and sued, and the case was settled out of court with an undisclosed agreement. Since then, Caliburger has added shops in Shenzhen, Hong Kong, Manila, Dubai, Bahrain, with locations set to open in DC, London, Stockholm and In-N-Out territory, Los Angeles. 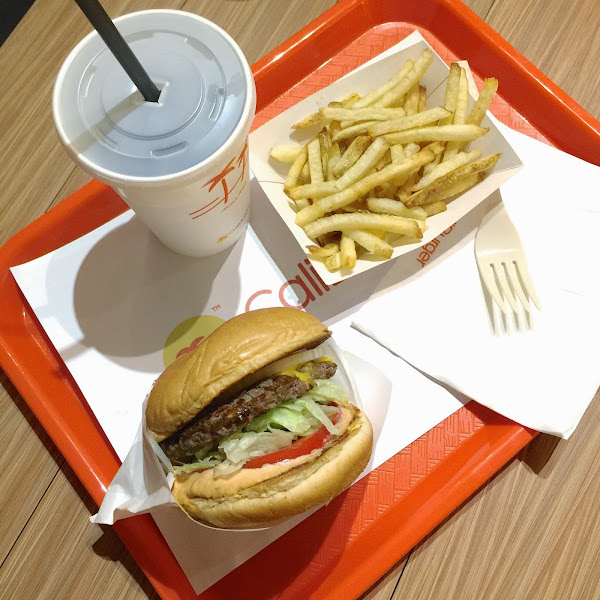 So is it worth trying? I always think it's worth trying on your own, since everyone has different tastes, but I wouldn't wait in a long line for it. Whether or not you love it, I think will depends on how hardcore you are. 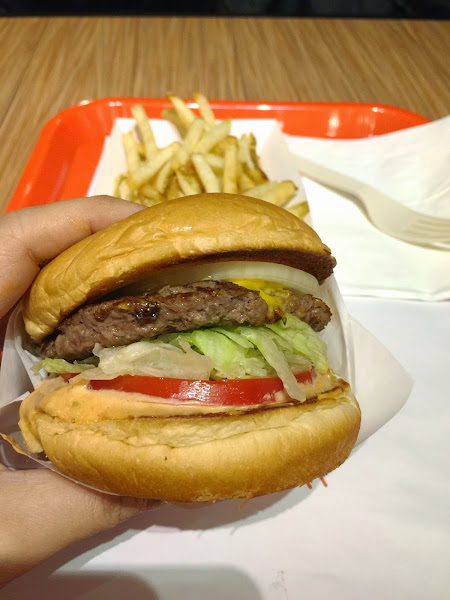 I thought the fries were spot on (especially knowing how hard it is to get fries that also look like In N Out's with Taiwan potatoes, having seen and eaten fresh cut fries at Burger and Co and Lobster Bar that were sweeter and browner). Personally I liked the plain fries over the animal style, excuse me, wild style fries, but I don't love Animal style fries to begin with. Too much going on with the thousand island dressing, grilled onions and cheese- I'd prefer it on the burger. 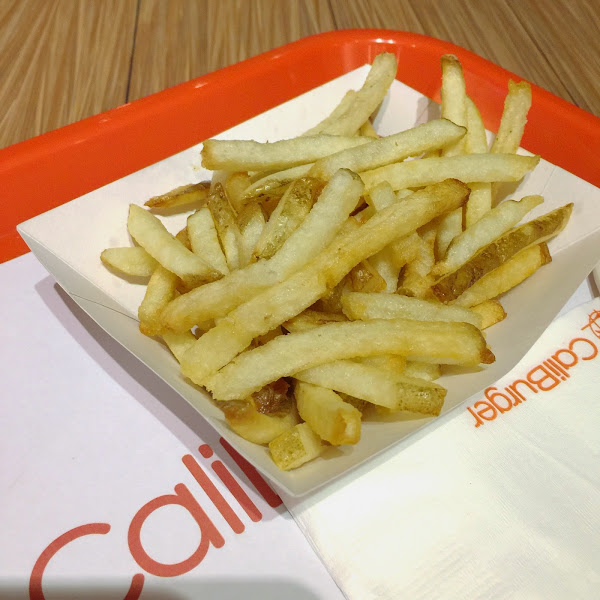 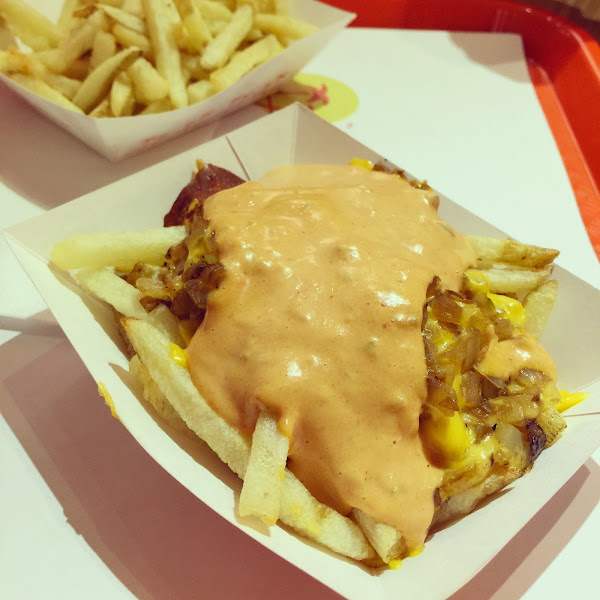 I thought the Caliburger was good, the meat, the veggies, the sauce, except I really disliked the bun. The bun was too sweet for me, but it might not be a deal breaker to some. Hopefully they'll keep working on it and make it less sweet. Note you can also ask to have your onions grilled for your burger instead of raw. The beef patty is made from Australian beef.

I found myself comparing the Caliburger to Burger and Co, my current fave for American style burgers, or to those from the newly opened gastropub Bing. I'd say those are my two go-to places for burgers these days, unless I'm watching a movie and grabbing a Whopper. Burger and Co recently also opened a second shop in Tianmu I'm looking forward to checking out. 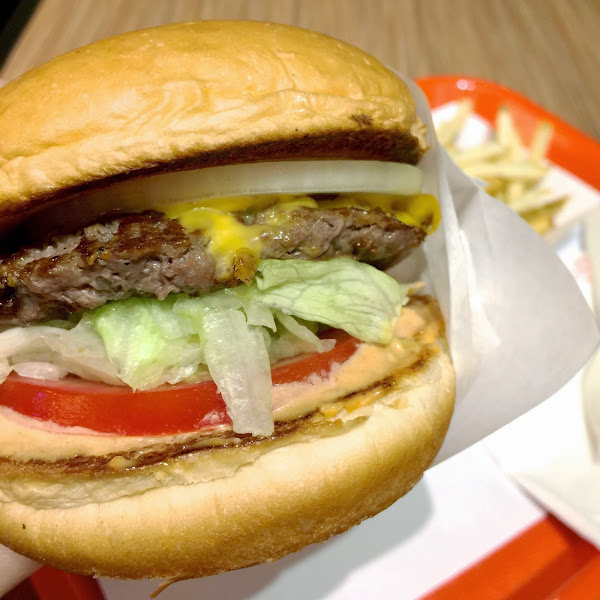 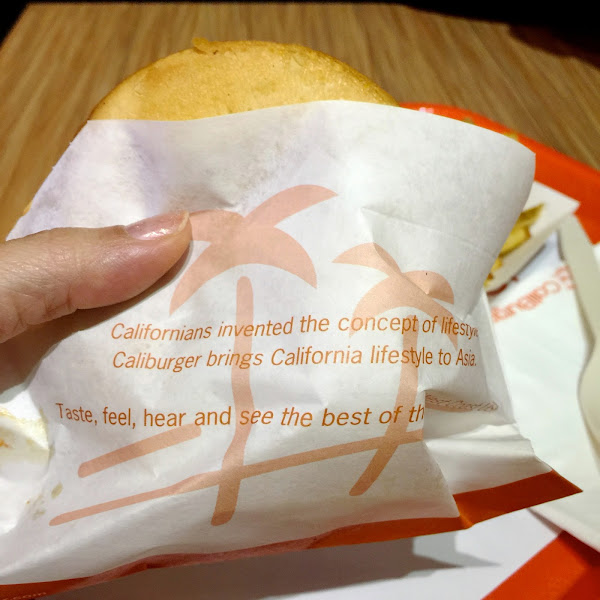 If you're really hungry, you can get the Calidouble (NT$345). If I go back, I'd give this a try and maybe order a milkshake. If you're drooling over these pics, give it try and let me know what you think. I know some of you will be very excited to have a place like Caliburger in Taipei. 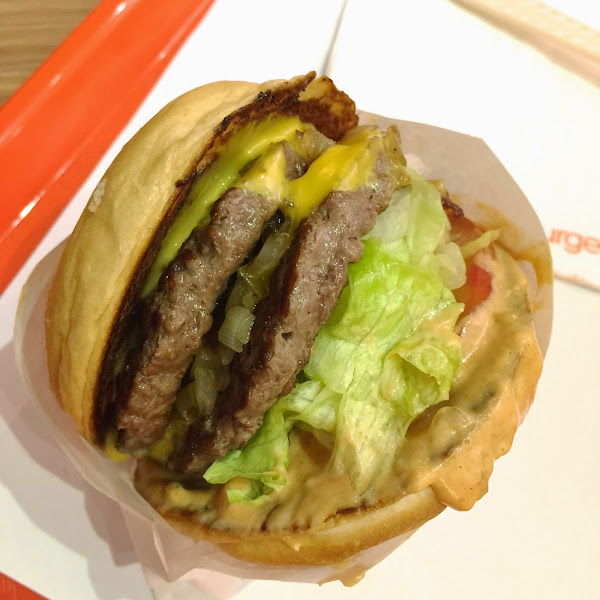 Exactly! The prices for some of these places here in Taipei is outrageous which is why these places come and go so often. Do some research and set your prices at a respectable level. Someone with some scruples please open a cheaper option in Taipei. I guarantee you'll make a go of it. It's not like the wages are astronomically high here. Why is that back in Ontario, where minimum wage is probably 10 times more, I can get a much better burger meal for a fraction of the price. What a rip off! Until then, I'll just BBQ my own (way better) burgers on my double-stack patio grill.

Kristin- I was thinking the same thing.. the cost for importing the ingredients should be balanced by the lower wages here.. Burger Stop did try to bring burger combos to Taipei for under NT$200 but they aren't in Taipei anymore either.

I have made burgers before for a restaurant in Taipei, and it is very very cheap to make, especially if they buy pre-ground meat. For my burgers, we had to ground our own meat, make our own ketchup, buns, and that only costs 60 NT per serving. Tell you the truth, they are just raising the prices to compensate for their ridiculous and unnecessary overhead costs.

wow, the burger is so amazing

Caliburger started in Shanghai several years back. If you read the reviews on dianping.com, it's quite bad. In fact it's first location in Shanghai shutdown very quickly. Lets hope this burger is an upgrade compared to the quality in Shanghai, as the burger, fries, and shake in Shanghai is less than desirable. And it's expensive. Caliburger is no In-N-Out Burger in quality, taste, and value.

Burger Stop was the closest to In-And-Out in Taipei. The owners raised prices after a while (still about 1/3 cheaper than Caliburger), and later left Taiwan for other reasons. It was probably my favorite burger in Taipei. These days, I go to Awesome Burger.

@Kristin - It could be because the rent in Taipei is astronomical. The guy that was running the Burger Stop some years ago called it quits when the landlord wanted to double his rent, just like that, as apparently business was good.
Many restaurants that go out of business here is due to the fact that the rents are way too high and doesn't even come close to what they're pulling in on a daily basis. Some places open up in the boondocks because of it and then people won't go, as it's too far to travel and they fail because of it.
Setting up in most food courts isn't any better and the rent in those are going up all the time as well.
Just look at the small ships in Xinyi, they're changing every few months, as selling cheap fast food in Taipei is simply not very profitable and peoples taste here changes every few months. Now Korean food is all the rage, give it 6-12 months and it'll be something else and 90% of the Korean places will go out of business.

Isn't that just like In-N-Out? I think people needs to create something of their own instead of copying others...sigh...

It was great 100% the same as In n Out. Keep up the good work Better than Burger Stop which I liked.

Went there last night. About 5 people in line in front of me. A little crowded but certainly no more than any In-n-Out is all the time. From the time of placing my order to receiving my food was 35 minutes. I watched what was going on in the kitchen. Because they were backlogged on orders, the fries were being cooked faster than the hamburgers so all of the trays just sat on the kitchen work station counter with fries getting cold waiting for the hamburgers. We had one regular order of fries and one fries monster style, so by the time we got our food the fries were limp, no longer hot, and the cheese on the monster style fries had congealed into one big block of fries, sauce, and onions. The hamburgers were not bad. Reminiscent of In-n-Out. We ordered one Combo A with regular fries and one Combo B with monster style fries. Price: $675NT. Same burgers, fries, and drinks at In-n-Out in my hometown, $350NT. The cost is prohibitive for what you get. I can't recommend it based on this one visit. If you do go, try to go when there are not very many people there.

Even though I love burgers, I would never ever give Caliburger a try. Copying In 'n Out is bad enough, but having the audacity to claim that it is from the States is unbelievable. With all the recent news on tainted food in Taiwan, I believe being trustworthy is one of the most important attribute, especially if you are in the food/restaurant business. To come out and straight up lie to consumers' face? No thanks. I'll pass. Next! -Z

The bun was really bad. I thought the meat and fries were just fine, but the first thing you notice is that the bun just was terrible. Ruined the entire experience. The worst thing is that the bun was toasted on the grill but still tasted stale. For this price, I don't think that I'll give it another shot. Disappointed, as I had really high hopes for this place.

Omg, that price is ridiculous! No thanks, rather eat at BK's.

If you really like this CaliBurger place it makes me doubt your taste in food..... that Burger was very very bad.... and the friesss... the worst.... I know everyone has different taste but ....

Anonymous- haha point taken. If you read the review, I said I didn't like the bun. And on following visits, the fries were not the same and definitely not as good. This location is closed now anyway