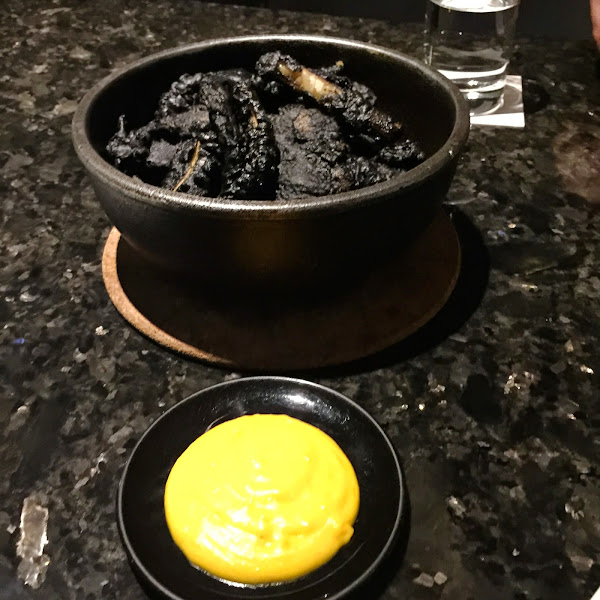 Kid friendliness: maybe for an early dinner, but menu is probably suitable only for foodie kids 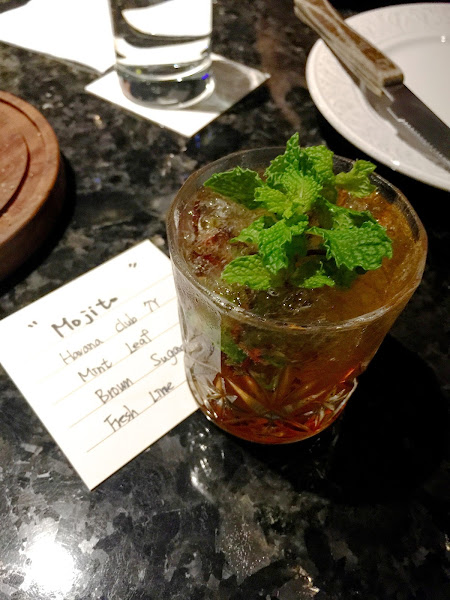 Once you see Diary's handwritten coaster notes for their drinks or its ink black bowl of "fried rocks," you won't likely forget it. Even though it had been years since my last visit to Diary, those images had made a distinct impression on me, which is not easy to do given the cluttered landscape of Taipei's restaurants (and I've had a lot of forgettable meals among them). 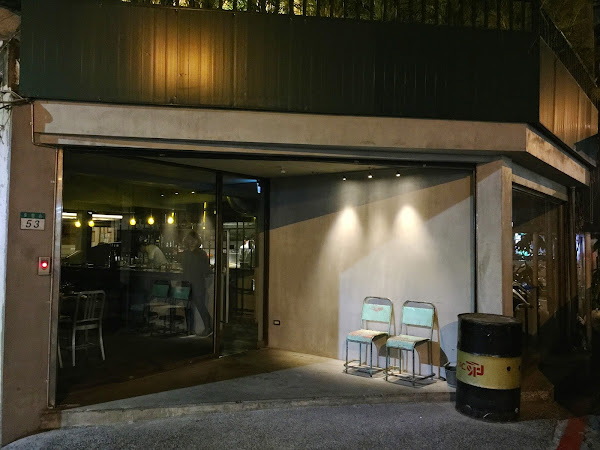 I hadn't planned on going to Diary when meeting up with a few new friends-- we had actually planned on meeting at a ramen shop, but it turned out to be closed on Mondays. Luckily, Diary had available seats for us at last minute's notice and I was curious about how Diary was since my last visit years ago. Diary has been doing bistronomy before it was a buzzword in Taipei, serving modern, creative food and drinks in a cozy, industrial space since 2009. Diary is easy to miss along Dong Feng Street since it doesn't have an obvious sign, but there's a lot worth exploring on this street (as well as the nearby Siwei Road). 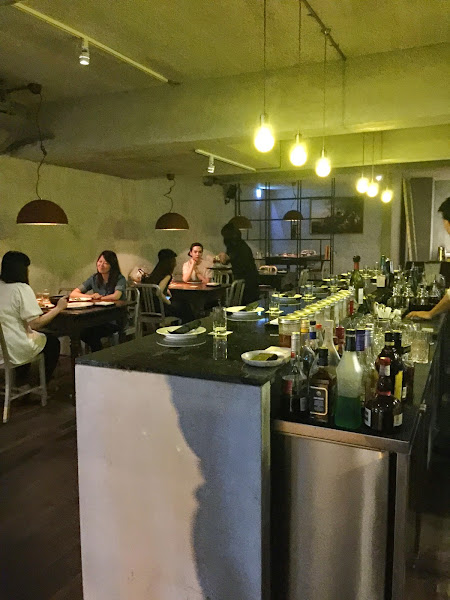 The handwritten menu is more expansive and polished than I remember, with lots of tempting options for shared plates, like lobster soufflé, crab cakes or roasted spring chicken. We end up ordering a crab meat ravioli, a risotto, the fried rocks and lamb shank to share between three people. 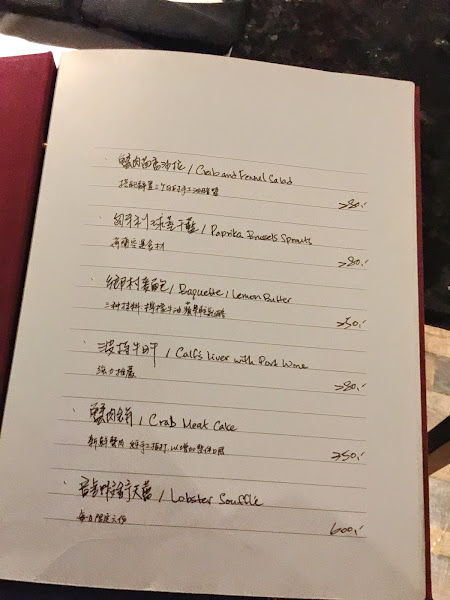 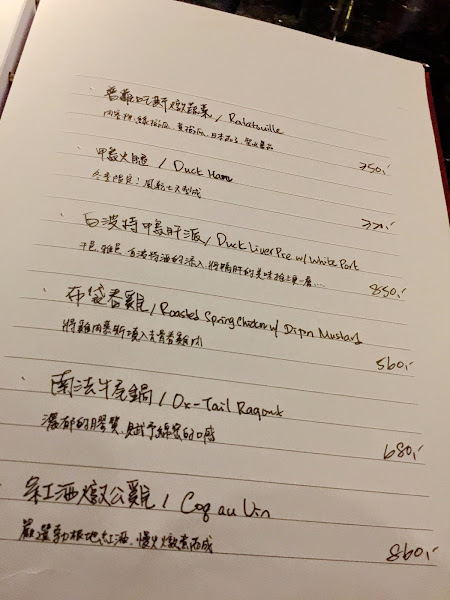 Complimentary smoked rolls of turkey are brought to the table, with smoke dispersing when the glass cover is lifted. (Unfortunately I was too slow with the camera to get the cool part of the action before this shot) 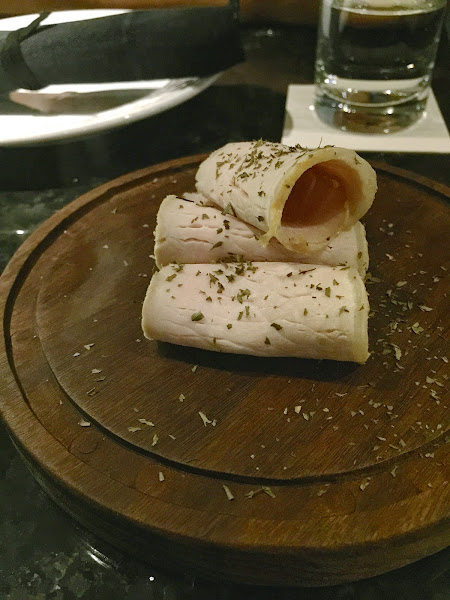 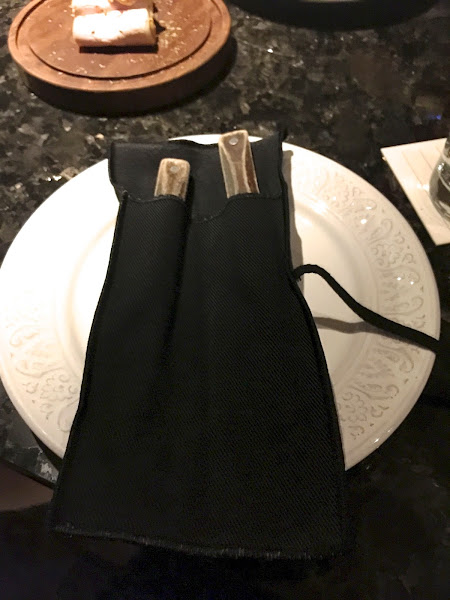 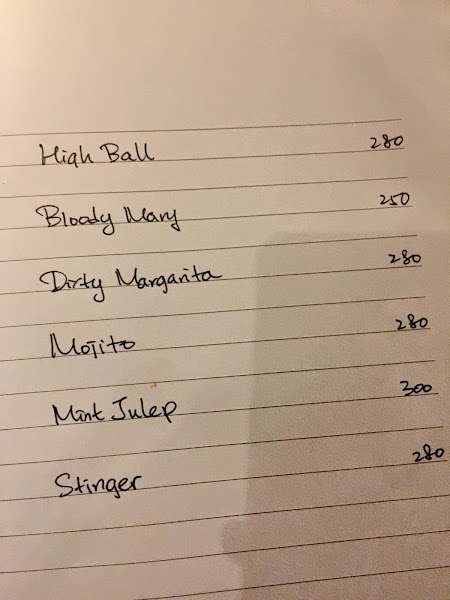 Predictably, I order the mojito (NT$280). As indicated on the handwritten note under the glass, Diary's recipe for a mojito is Havana Club 7 year old rum, mint leaf, brown sugar and fresh lime juice. It's a more serious version of a mojito- not as cloyingly sweet as some other bars and a distinct brown color instead of clear when it's made with sparkling water and white rum. 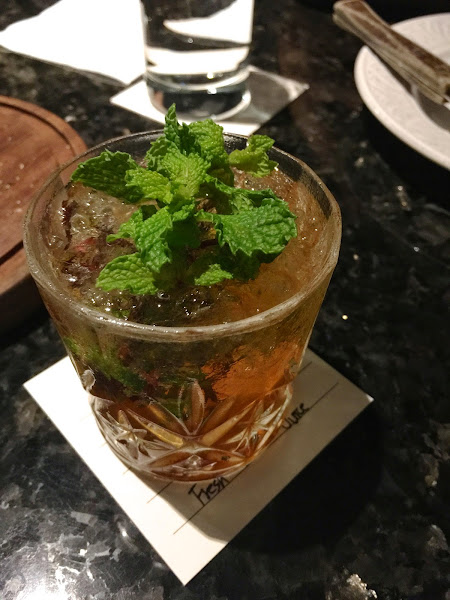 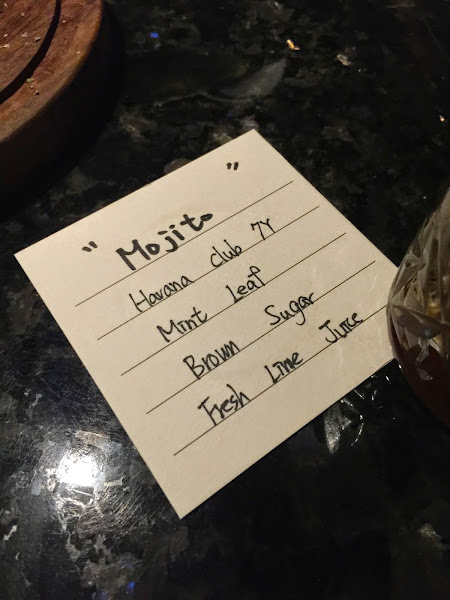 The Crab Meat Ravioli (NT$320) was a hearty enough portion to share with bite size pieces bathed in cream sauce and black pepper. The ravioli dough is a bit gluey for me (maybe underdone a tad?), but we still clean the plate. I was pleasantly surprised with the portions of all the dishes at Diary that night as I remember the dishes being smaller on my last visit, and I dislike it when restaurants serve only four to five pieces of ravioli in an order, especially when it's not part of a set tasting menu. 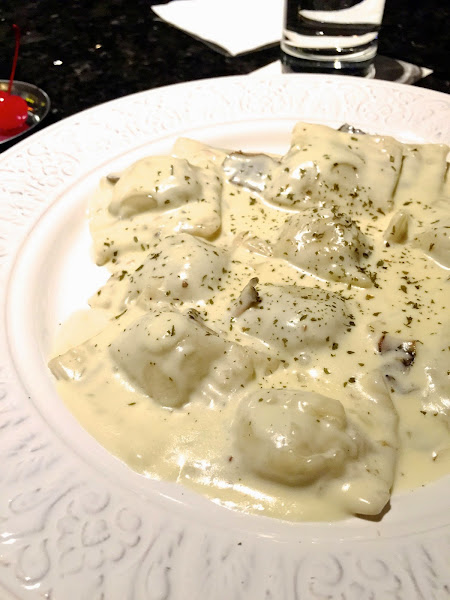 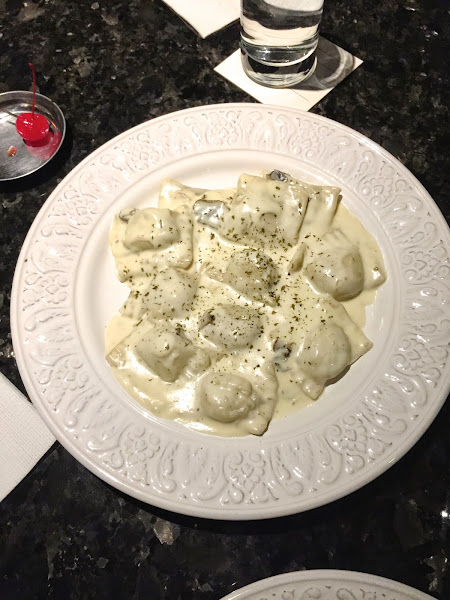 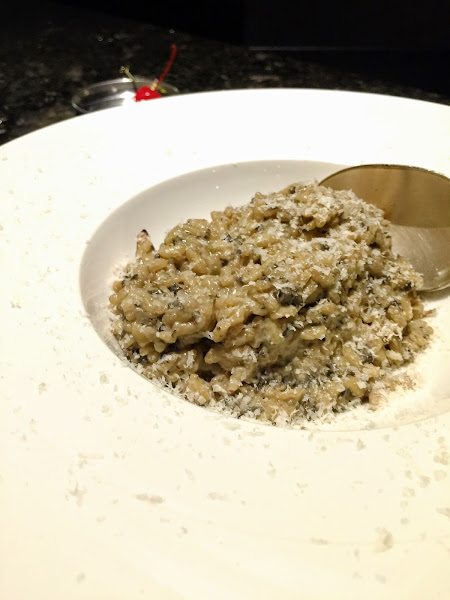 Paired with the bright yellow saffron mayo, the Fried Rocks (NT$320) is the most striking dish at the table. I couldn't stop eating the crispy, squid ink battered, fried fish, squid and shrimp. Perfect amount of coating and crispiness and the seafood inside was still moist and sweet. Darth Vader of fritto misto. If you try one thing at Diary, you must order this signature dish. 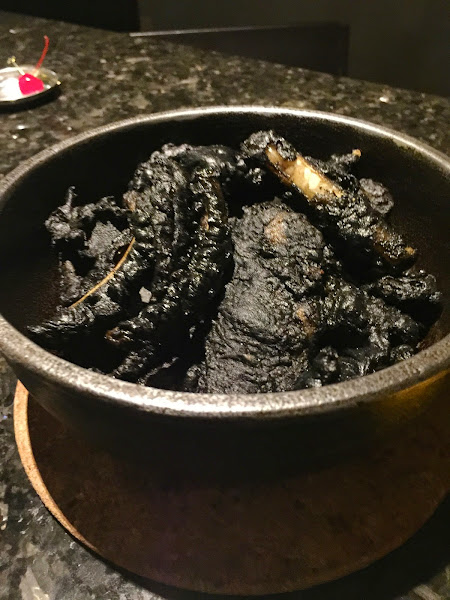 The only other restaurant I had seen do black battered calamari in Taipei was the Spanish tapas restaurant Cocina de Jackie, who took the theme one step further and served it in a faux plant pot with a flower. 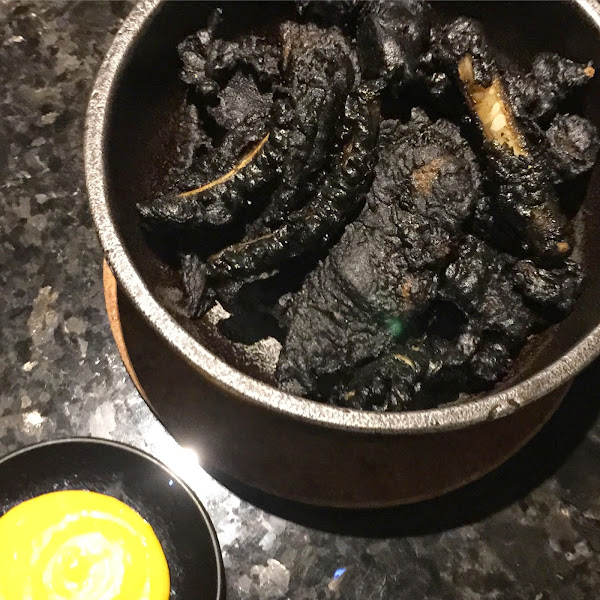 Braised lamb shank with fennel (NT$1380) - I was getting quite full by the time the lamb shank and mashed potatoes came to the table, but it was still a happy addition to our stomaches. Some parts were fork tender, and some parts were a little bit tougher, but again, a good sized portion to share. I might try other dishes next time rather than reorder this again. 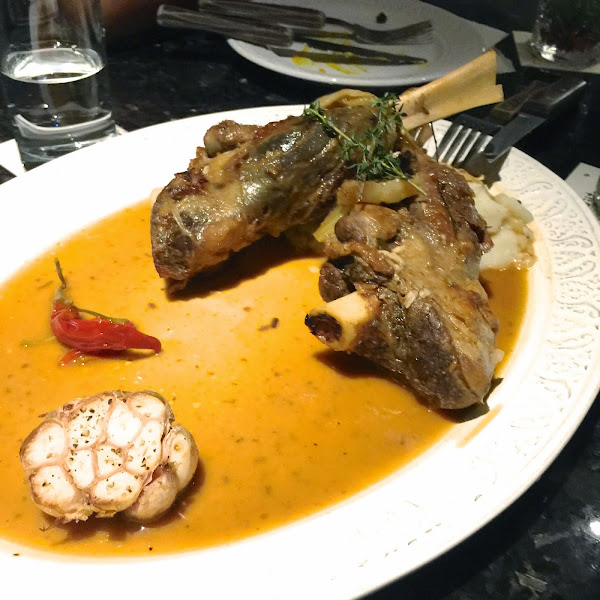 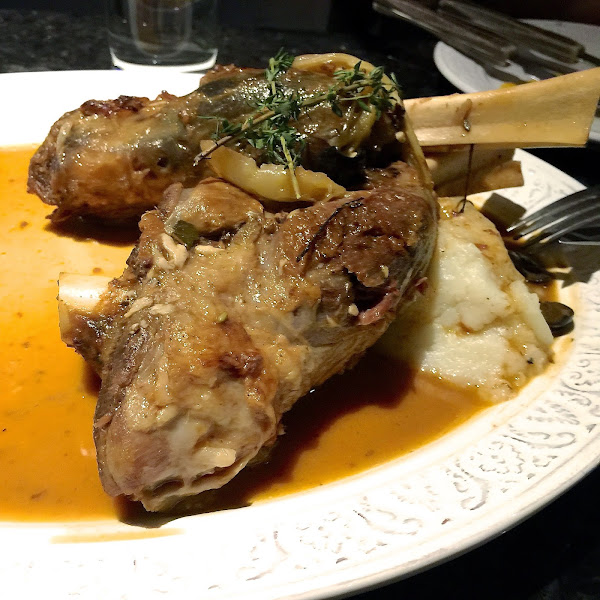 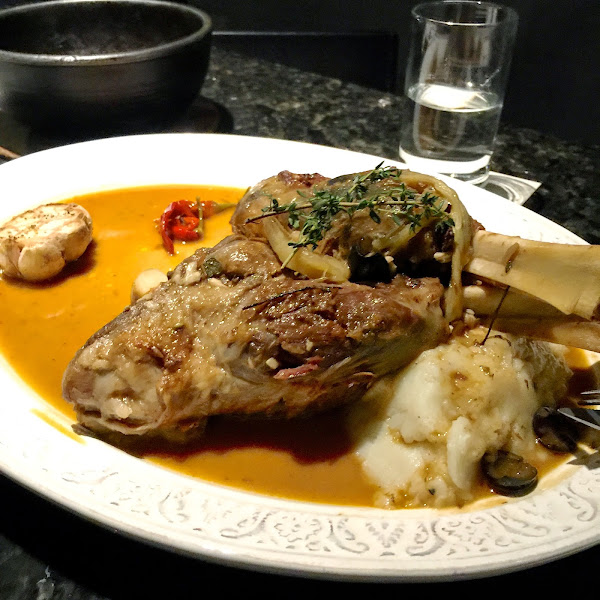 Reservations recommended for Diary, as the space and seating is limited.
Posted by joanh at 11:31 AM

I tried out Diary tonight and quite honestly it was a huge let down. I just can't see what was great about the food here as the flavors and quality is just not rich enough. Taiwan is strong with Chinese and Japanese cuisine, and the western food is consistently underwhelming when compared to places like such as HK and Shanghai. The black rock of fried calamari, fish, and shrimp was not seasoned at all and the overpowering sweetness of the yellow sauce/aioli was not good. As was the crab meat and fennel salad which was just frisee and 4 pieces of poor quality crab legs. Our oxtail braise/soup also did not have the 7 hour stewed taste recommended by our waitress. The roasted spring chicken was blah. I am sorry, I just don't see how this restaurant can be highly recommended. It just wasn't good and I unfortunately couldn't agree with why you enjoyed this restaurant.

Hey Steve, thanks for sharing your experience.. Too bad it fell short of expectations for you. I didnt try the dishes you had, and perhaps if I did I would have had a different review.

I visited the other day, and I don't know if they told you but there is a minimum 800nt charge per person. I think if you order enough, they don't let you know, but otherwise if you try to order less they won't let you. Other than that, the ravioli for me was also a bit raw, if not too Q. The skin felt thicker, and our risotto rice was way too al dente.
But my two cents. Loved the mojito.

Hey Nick, thanks for your comment. That's definitely good to know.. NT$800 per person is definitely steep and you wouldn't be able to just go there for late night snacks or drinks. I felt like our ravioli was a bit underdone too but didn't know if that was the texture of the dough.