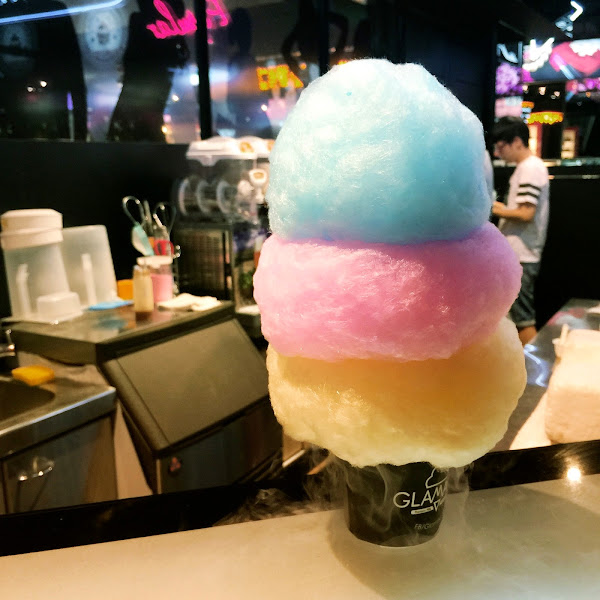 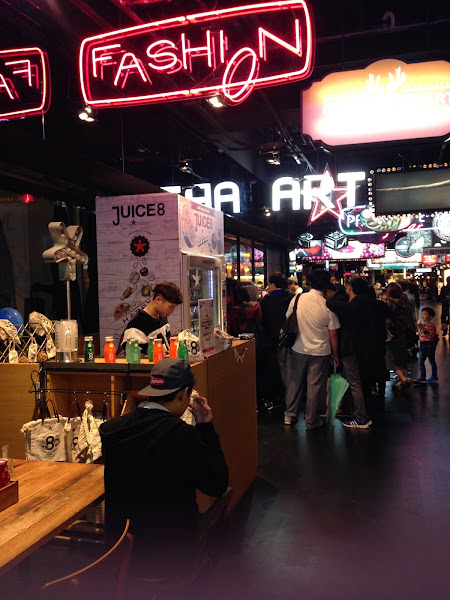 The first time I ever had actual clouds of cotton candy stacked on top of ice cream was at Coffee Alley in 2011, where it was more of an interactive experience. A small pitcher of espresso is served to pour on top of the cotton candy so that it melted into a caramel coffee sauce over three scoops of vanilla ice cream. I've since spied imitations at a cafe in LA that opened a few years ago.

Then I spotted wisps of cotton candy on soft serve at Honey Creme, which was more known for their honey comb ice cream.

Glam Air takes it one step further, by making the cotton candy into literal eye-candy. Sugar rainbows are molded and stacked high like Taipei 101 and dry ice is added so that each cup has its own special effects of fog drifting out, its own "Glam Air". The visual result is hypnotizing- you can't help but to feel like a kid again,  those times that your parents agreed to buy you cotton candy. The concept is so simple it's brilliant- cashing in on those kid at heart fantasies for NT$150 a cup.

Glam Air also has soft serve without the cotton candy (NT$110-140)- plain, with caramel, honey, honey comb, chocolate or with fish taiyaki instead of a cone, or as a float with bright hued sodas or shake. 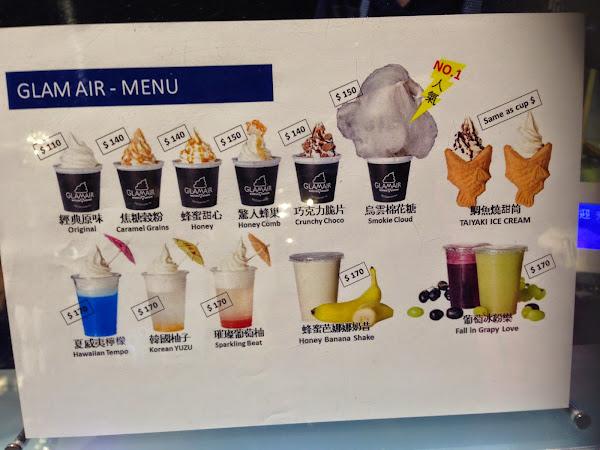 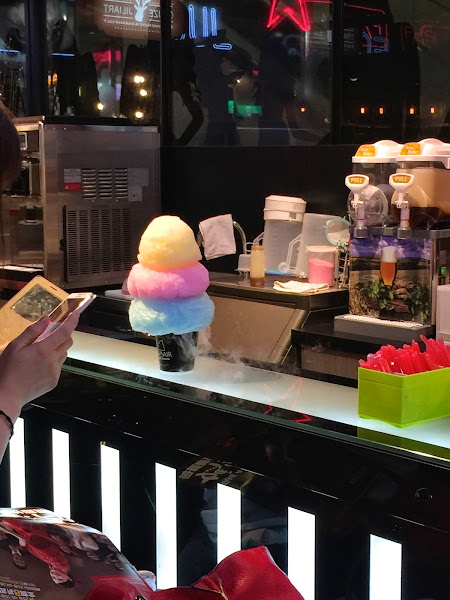 Everyone taking selfies with their cotton candy ice cream (and not eating it. Lol) 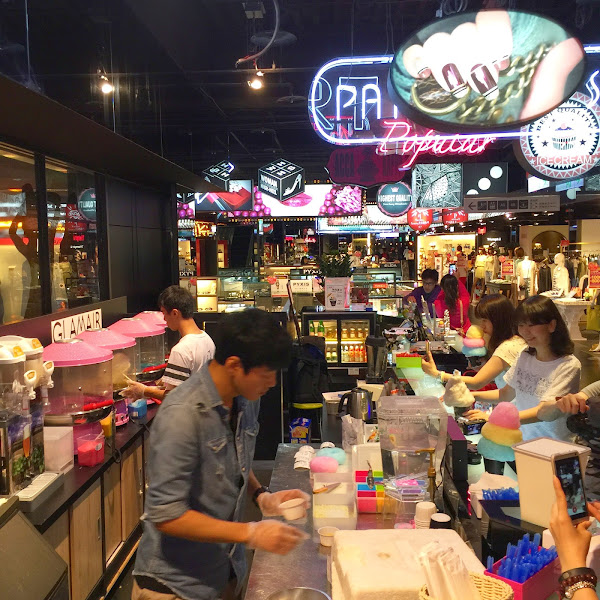 It's amazing to see how crowded it usually is, even on weekday afternoons, especially in comparison to other ice cream shops in the Mitsukoshi malls. One news clip on Glam Air's Facebook page reported a 40 minute wait on weekends. There's a liquid nitrogen ice cream shop in a different building that had no buzz going on. The thing with liquid nitrogen ice cream is that it looks cool when it's being made, but the end result looks just like regular ice cream- while Glam Air's final result is purposely eye catching. 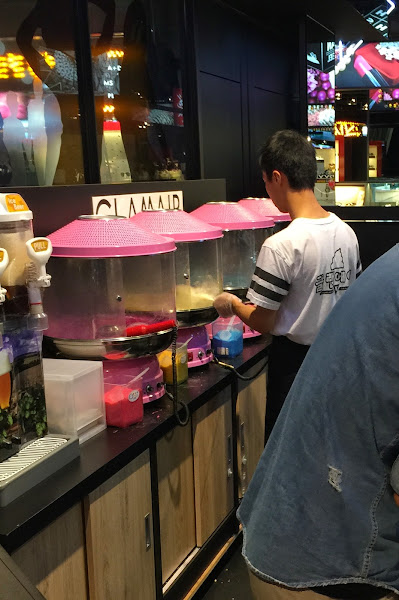 Each Smokie Cloud is made to order. The three tiers of cotton candy tower are made from freshly spun puffs of sugar then molded into doughnut rings to fit around the soft serve. When it's done, a small scoop of dry ice is put in a larger cup and then the smaller cup of soft serve is placed inside and served. 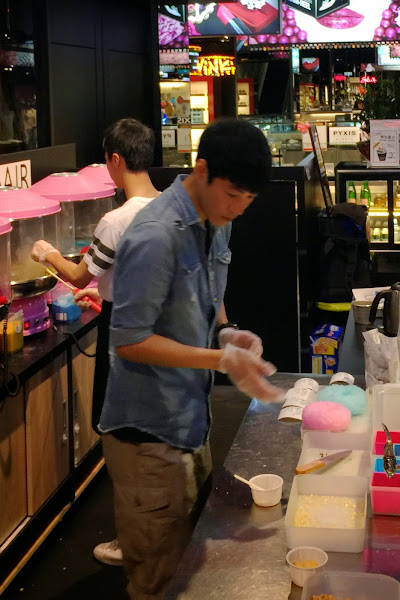 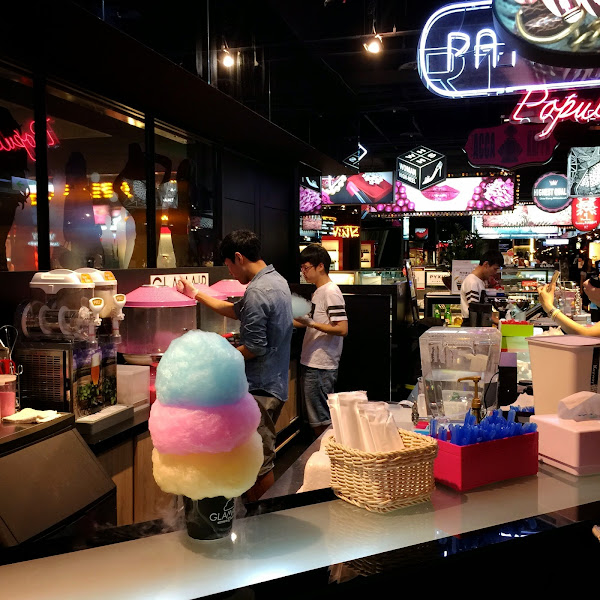 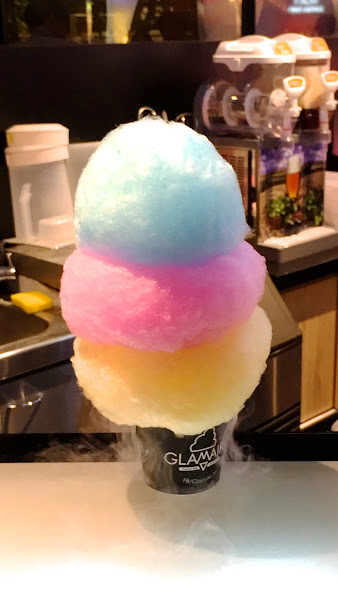 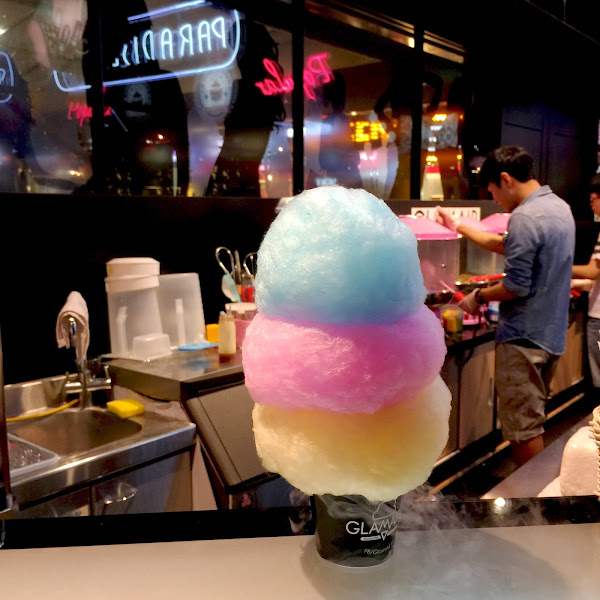 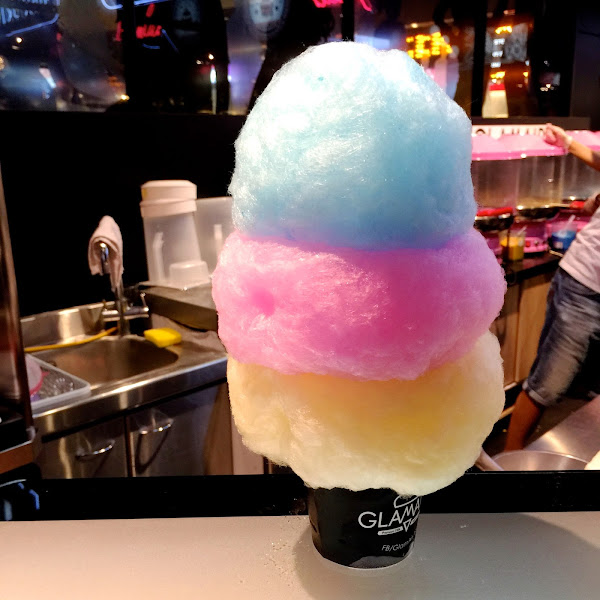 I know by posting this, I'm perpetuating the hype, but dang it if it isn't pretty. It's only a matter of time we see a copycat in the states. I know some of you will go and get one just for the photo ops and it won't even matter how it tastes! Isn't that crazy? Thanks Kirbie's Cravings for the excuse to finally try one during our Xinyi dessert crawl.

Glam Air is one of those businesses that succeeds in the age of social media- you see it online, you try it once for your own post/selfie, but unfortunately it doesn't taste very good.  It's much prettier than it tastes. The cotton candy tasted like cotton candy and I found the soft serve overly sweet, but in the end, most people won't care. We'll have gotten our sugar high and photos and Instagram likes and endorphins from the rainbow hued memories of being a kid again. 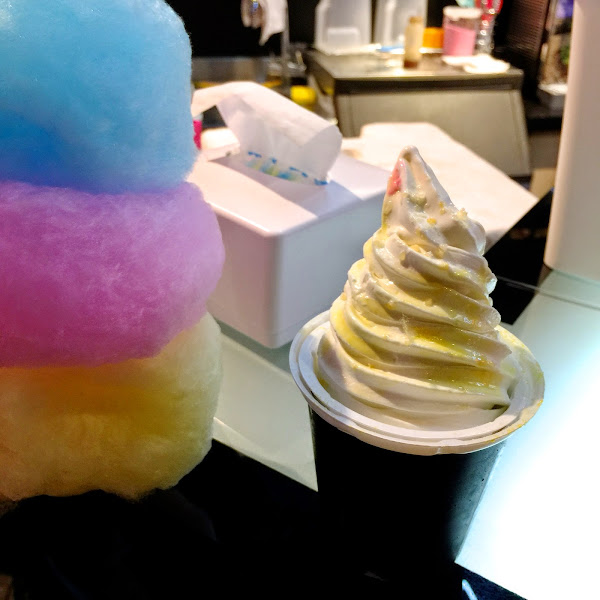 Thanks for taking me here! Even though it was more for photos than taste, it was still fun to experience as I haven't seen anything quite like this before.

I just recently went to here with a friend as well. It was definitely an overpriced, disappointing experience that was only worth the photos!!

Is this place still open?