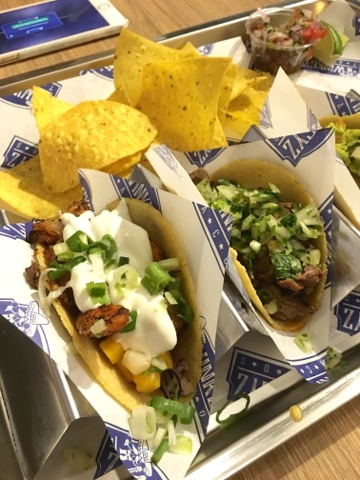 kid friendliness: lots of non spicy options for kids, there are also fries and corn and chips 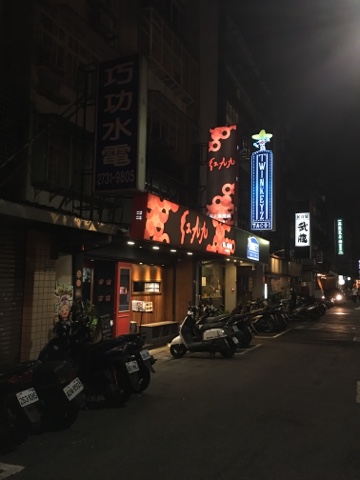 I'M ON THE HUNT FOR TACOS IN TAIPEI on a quiet alley near Yanji Street. My phone GPS tells me I'm close and I spot the bright blue neon sign not far away. After attempts to walk in at Mume (packed), Le Blanc (kitchen closed at 9pm), Thai Made (closed at 9pm), Chi Mac (too heavy), I remembered that I wanted to try Twinkeyz and we walked from Yanji/RenAi to Yanji/Zhongxiao.

Opened just a week ago, Twinkeyz Tacos aims to bring both street and uptown tacos to Taipei in a casual yet cool vibe. Along with tacos, there are nachos, kimchi fries, mexican corn, chicken wings, horchata and beer (although don't expect any burritos or quesadillas here). I know we all get excited everytime there is a new taco place in town, and even though I didn't want to get my hopes up, I can say, I think there's a lot of promise and y'all can get excited too. 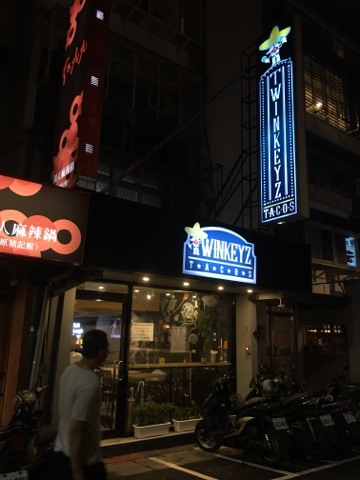 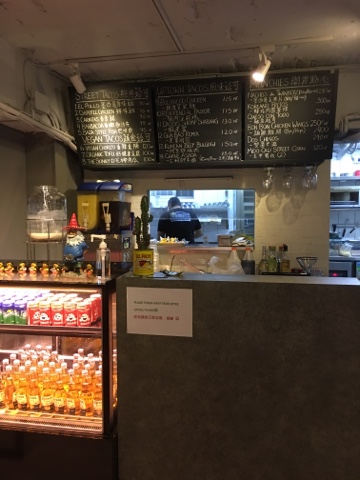 In neatly lettered writing on the chalkboard above the counter, there's over a dozen tacos to choose from as well as a handful of munchies. It wasn't until I spied someone else with a paper menu that I asked to see it later for photos, even though I had already ordered. If you're traditional, stick to their street tacos like chicken, carnitas (pork), barbacoa (beef) or baja fish (which can be fried or grilled). If you're adventurous, you can try some fusion flavors like bollywood chicken (indian spiced), korean beef bulgogi (all the rage in LA, 10 years ago), gua bao remix (replacing the bun with tortilla in a Taiwanese pork belly bun), or sous vide Carne Asada. There are also three vegan tacos on the menu with soy chorizo, tofu taco or veggies.

I ordered an assortment to try (although I wish they had told me about the taco flight deal when I ordered) and my favorites surprised me.. 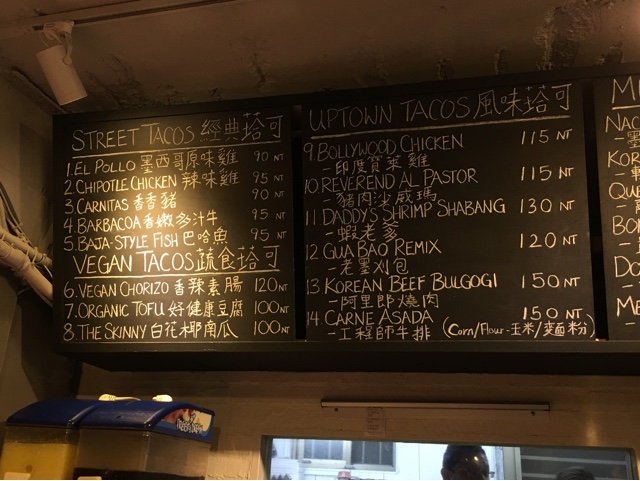 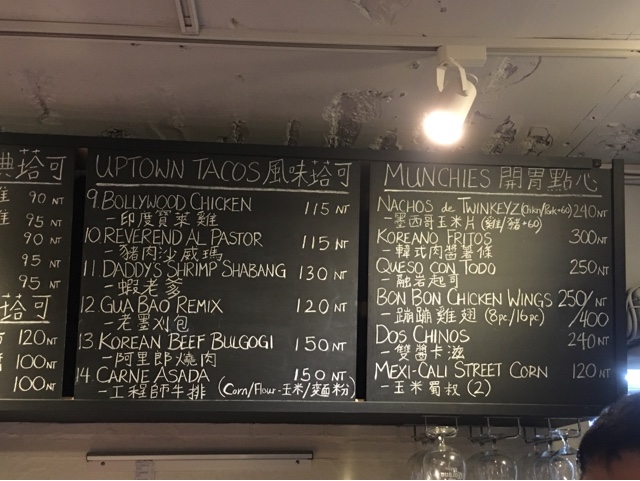 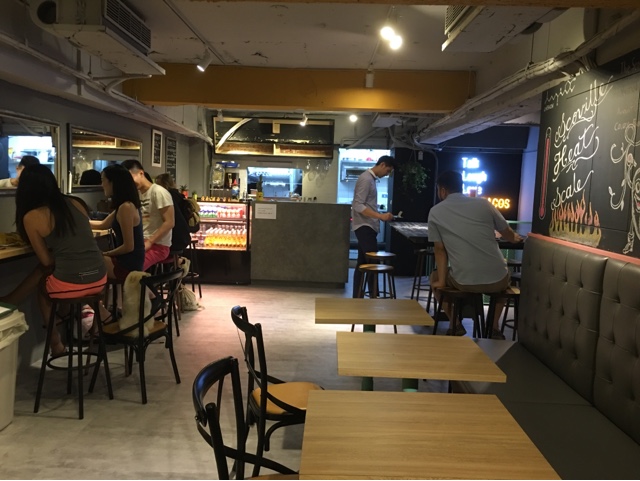 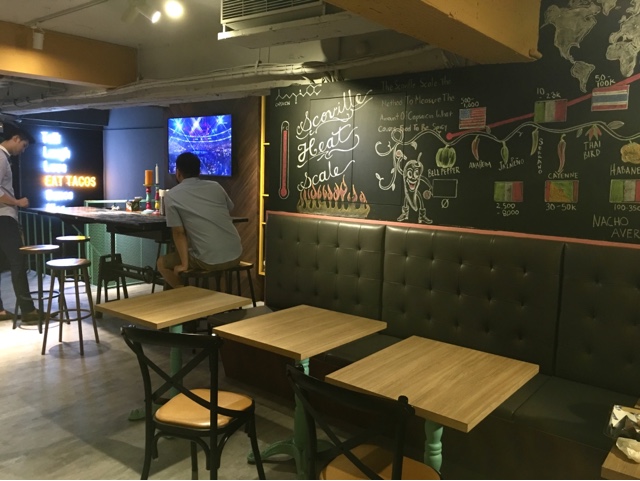 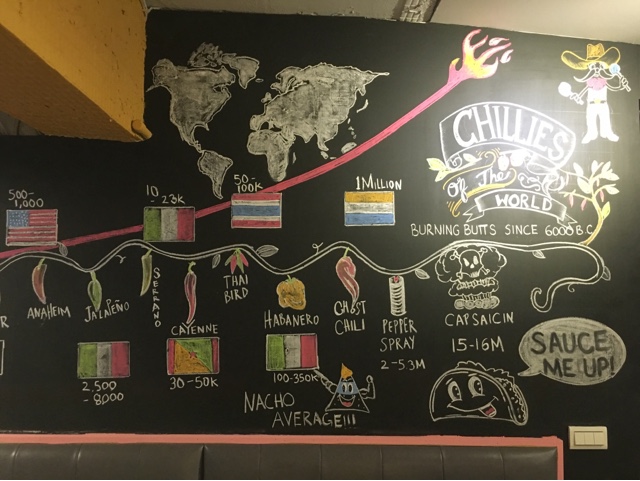 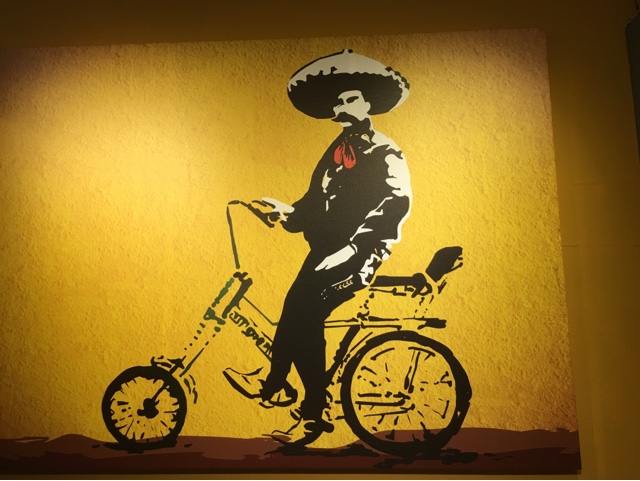 It's great that Twinkeyz gives you free chips and salsa which is strangely rare in Asia. That being said, they just opened a week ago and are still in their soft opening, so they are still working everything out- from their pricing to the serving style to QC. The chips in my first round were fine, but the second round of chips were not crispy and not appetizing. 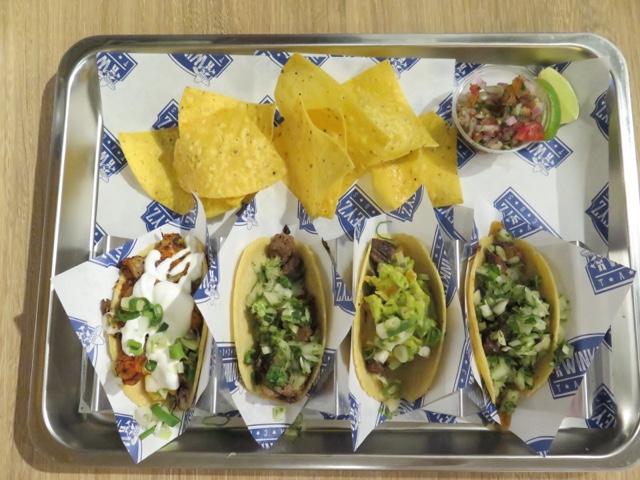 When I ordered you can choose between flour or corn tortillas. Of course, corn.

Let's take a closer look at the tacos.

Daddy's shrimp shebang taco (NT$130) was hands down my favorite bite of the night. With shrimp marinated in the Shrimp Daddy's shebang sauce, mango salsa and (a bit too much) sour cream, the taco was filled to the brim and the shrimps were fresh and sweet. It was so good, I had to order another one. I haven't been to Shrimp Daddy's yet, but this taco made me want to try it. And if you're wondering why they are offering Shrimp Daddy's sauce, it's because the chef here at Twinkeyz used to make tacos at Shrimp Daddy's on Thursdays and it was so popular, it evolved into Twinkeyz Tacos. 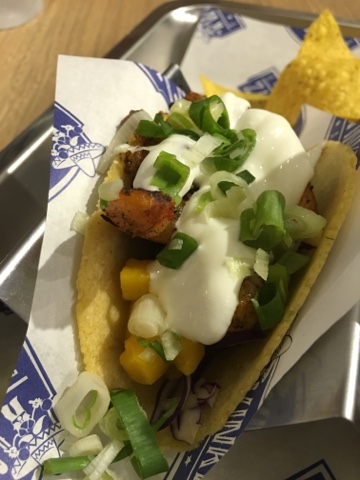 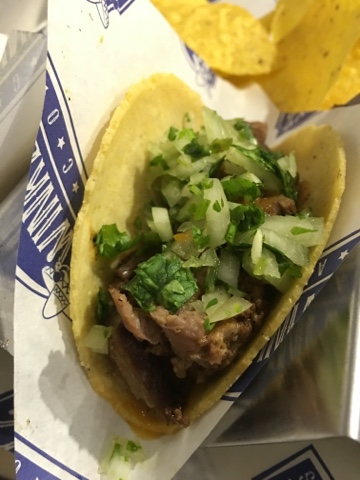 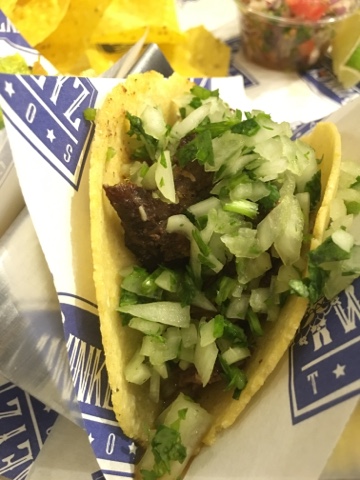 Carne aside with guacamole (NT$150)-  I was a bit disappointed with the carne asade, especially since it was one of the most expensive tacos on the menu. The 48 hours sous vide made the meat quite tender, but the amount of meat in the tacos seemed lacking in proportion to the price and the guacamole though creamy, didn't taste sweet or maybe it wasn't ripe yet. I could get a whole burrito elsewhere for the price of this taco. I wouldn't order this again personally. 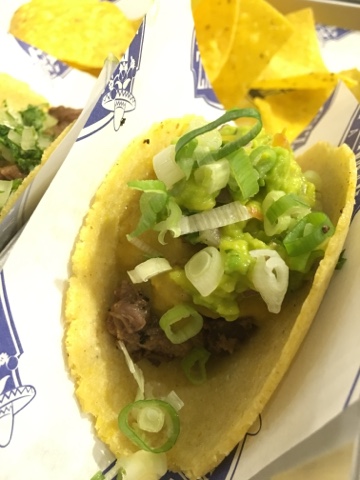 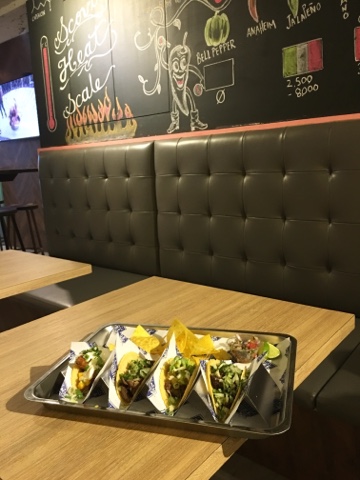 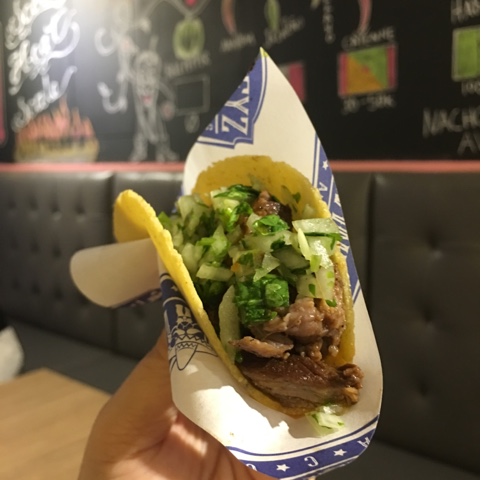 Nachos de Twinkeyz (NT$240)
Although there were a lot of chips on the platter, this was overpriced for me with no meat included in this price. (Meat is extra) There wasn't enough cheese, or it was oddly distributed, so that there were clumps on certain chips and zero cheese on many of the pieces. I have to say I'd prefer the nachos at Machos Tacos, 1Bite2Go or even the diner over this version, but it's an easy fix here. I would totally order Korean kimchi bulgogi nachos or even shrimp nachos, so if Twinkeyz could figure out some way to custom the nachos with marinated meats they already have on hand for the right price, it could offer the customers a lot more options. 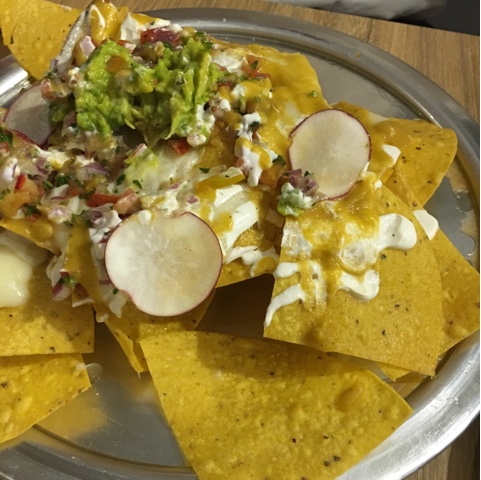 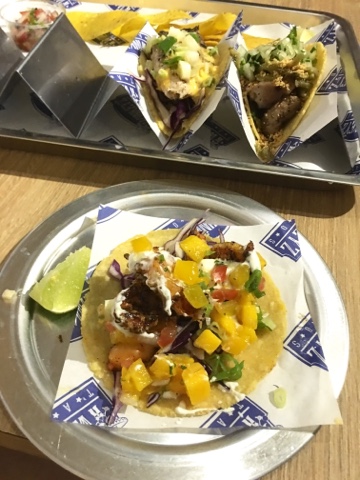 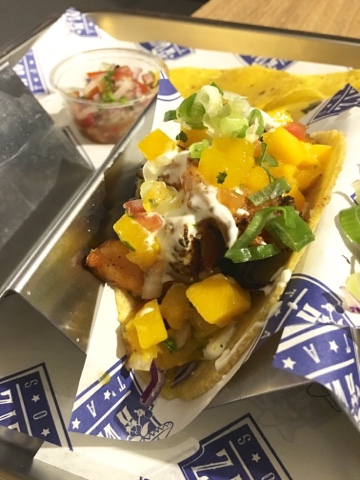 Baja fish taco- grilled mahi mahi. I originally was going to get the fried version, but the server suggested I try the grilled version and I'm glad he did. With purple cabbage and Twinkeyz orange sauce, this might have been my second favorite taco of the bunch. 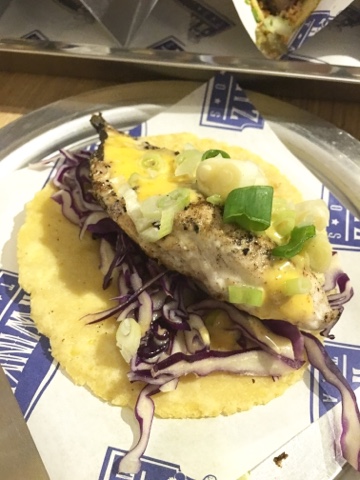 Gua bao taco remix (NT$120) with braised pork belly, pickled vegetables, peanut powder and onions/cilantro. I've often bemoaned about the fact that many of the Mexican restaurants in Taipei were localized into weird versions of mexican food to suit local tastes (Doritos plus salsa does not equal nachos). But this kind of Tai-Mex fusion is something that I can say YES to. Why not take the heavier bun and swap it out for a tortilla, but keep all the elements of the gua bao? I wonder what locals will think of this, but it doesn't matter. This is totally something I could see happening on a food truck in LA. 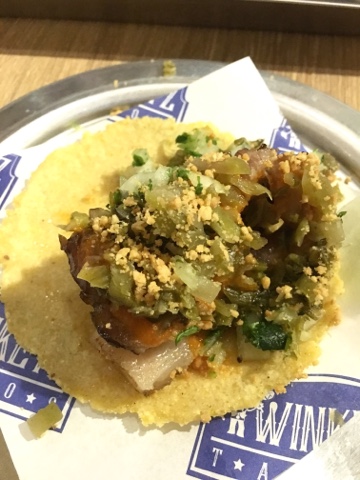 The printed menu is fun with directions of "how to eat tacos like a boss" and more descriptions of each taco that I wanted to see when I was initially ordering. But eventually Twinkeyz will have to have either photos of some of their tacos and other dishes or photos of their food out front, if they want to draw in locals passing by. Macho Tacos, Eddy's, the defunct Juanitas and all the Mexican restaurants before them have done a lot of educating Taipei on what and how Mexican food is, but Twinkeyz has a slightly more gourmet vibe with the fusion tacos and higher price points, so they will still have to figure out ways to explain their different tacos quickly, so that if there are lines not everyone is asking a million questions on their first visit (like I was) instead of ordering.

The prices on the menu are already different than the ones on the chalkboard and the chalkboard was taken down after I ordered and erased, so price points and menu are still being worked out and may not be exactly the same as this visit. That being said, I do think Twinkeyz should offer some sort of soft opening deal for early adopters/supporters who go and try their tacos while they are working everything out and also elicit feedback from customers. It would be great to have taco flight being buy 3 tacos, get 1 free or something along those lines, since it's best to try a variety of tacos and you need at least 3-5 to be full, since they are not that big. That being said, I'm happy there's another taco place in town, there's room for more. I know you guys love tacos too, so let me know if you try it based on this review and what you think, do these pics make you want to try it? Looking forward to my next round of tacos and trying to Twinkeyz into making me some customized nachos with more cheese please. 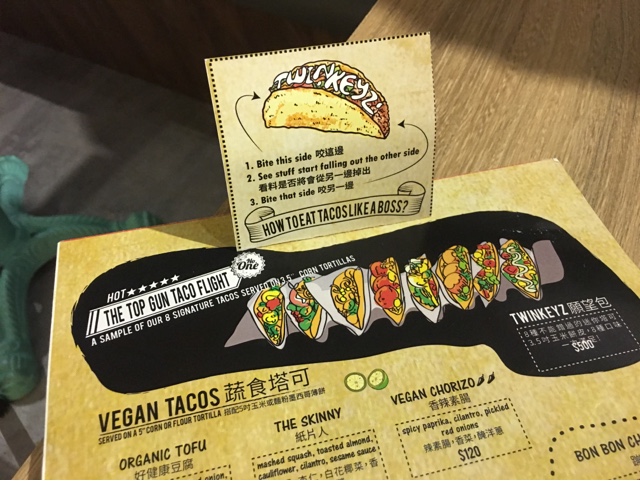 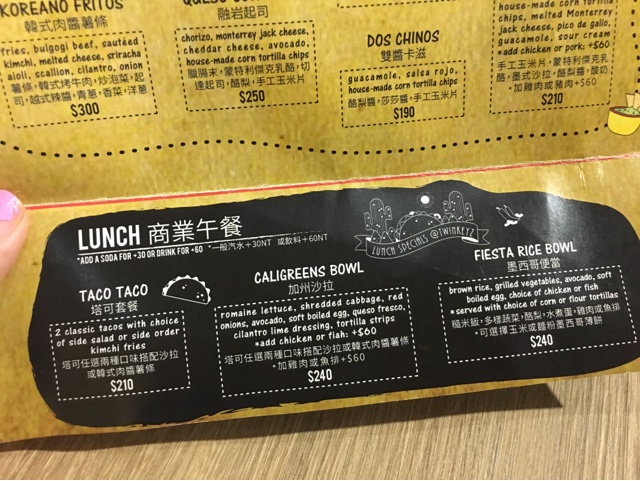 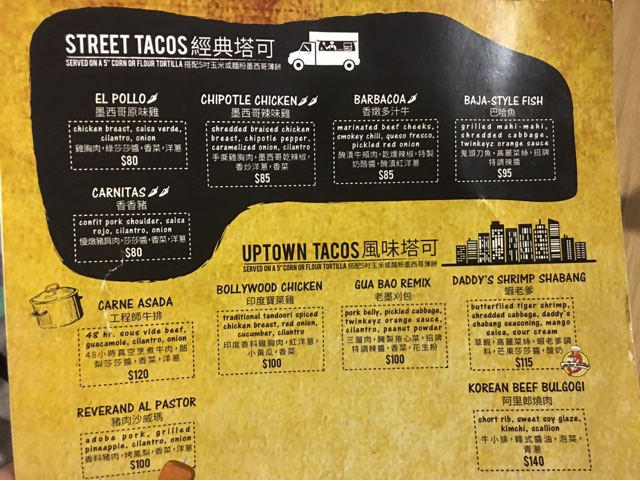 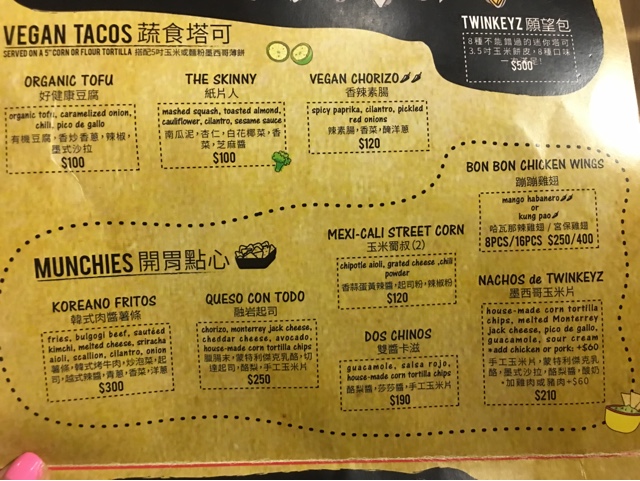 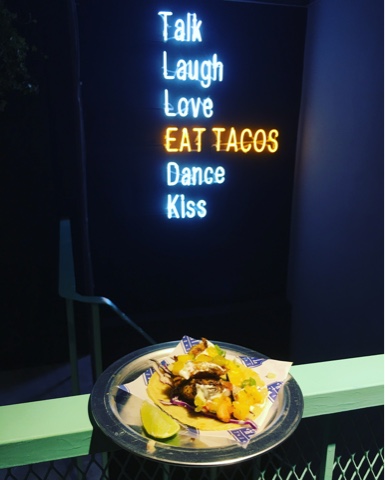 Looks good! Thanks for posting about it. Will try it soon

This place was terrible! There have been far better Mexican restaurants that shut down. If I want to eat Mexican I will go to Macho which isn't far from this place or The Corner which is very close to this spot.

Hey, Hungry Girl! Was wondering if you've been back to Twinkeyz lately? If so, is your opinion still the same? I went just last night (Saturday night) with three other people and had an absolutely terrible experience. It seems a lot has changed about the place since you visited. The prices, which you noted, have definitely increased. But, the menu has also changed and no longer includes chips and salsa with the tacos. The tacos are now served with a VERY small portion of (cold) rice and beans; however, there was no mention of this anywhere in the restaurant or when we ordered. When we asked why, they brought us chips and salsa but said the menu had changed. We also received floor tortillas instead of corn, but didn't bother to ask why. Furthermore, our tacos took 30 minutes to arrive at our table and they all came out very staggered. By the time the fourth person got their food, the first person was finished. The restaurant was not at all busy; there were 5 other diners when we arrived, so this wasn't due to busyness. Anyway, my group and I had high hopes after reading your blog, but were severely disappointed in this place. Not your fault, but worth noting that in case you go back (or even for anyone visiting for the first time), don't expect much. We all left still hungry and very unhappy!

Hey Kelsey! Thank for your comment and sharing your experience.. I haven't been back lately and it does sound different than my experience. I suppose they should ask the customer if they would like chips and salsa vs rice and beans. Was there a taco sampler of some kind? I thought prices were a bit high in the first place. Sorry to hear it didn't fit your taco cravings ☹️

This place was not good at all. We got there around 6, the place was filled but everyone got their food so I don’t know why it took 30+ mins to get our food. We ordered the shrimp, grilled fish, a few street tacos and korean fries. The shrimp and grilled fish came in a tortilla without any fillings, so I asked why wasn’t any cabbage or lettuce, he just said, that’s how it’s made here. The street tacos were skimpy but it had some onions on top. No chips, just some black beans and a side of salsa. The korean fries were good, just really expensive. I get that this is TW, Mexican is hard to come by but if you’re gonna charge 150 for a taco, make it right, make it good.

I was shocked to b this disappointed bc their Facebook reviews were outstanding. Too good to b true, going back to Macho tacos.

Hands down the best street tacos in town. But $5 a taco is silly. I like the Carne asada and the Korean taco, but I'm not ordering 10-12 tacos like I would at King Taco. Macho Tacos is cheaper, but you get what you pay for. Only reason I would still go to Macho is for Taco Tuesday. I've never tried the nachos, but I have seen them and I have no desire to try them. I usually make my own, but their guac and pico are solid. You can buy them as well as packaged tortillas, which is cool. Overall, Twinkeyz tacos are solid, but overpriced, which kinda defeats the purpose of eating tacos because tacos are supposed to be cheap street food. Gourmet tacos makes no sense to me.....