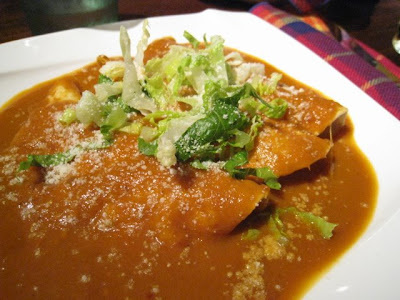 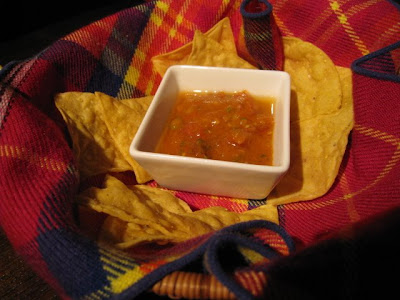 Any time I hear about a new Mexican restaurant in town, I think to myself, nah, can't be good, don't want to get my hopes up. Then I drool over any decent review, forums about good experiences, pictures and the more time passes, I think the more my expectations build and get too high. It took me awhile to get to El Gallo from when I first heard about it, as it's in Tianmu which is far for me, and took me awhile to write up and post this review (from when I first started it over 8 months ago), but I'm sure it will still be new to some of you. 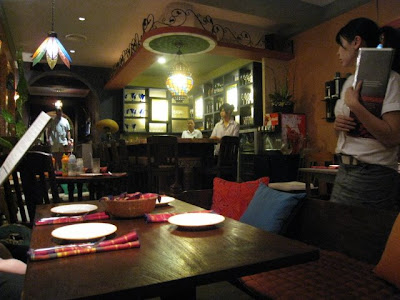 El Gallo is definitely a cute, little sit down restaurant that's elegantly festive, with a decent sized English or Chinese menu that include appetizers and main dishes that are more than just tacos and burritos, with dishes like Chile Colorado Pork Stew or Chile Rellenos Stuffed Bell Peppers. 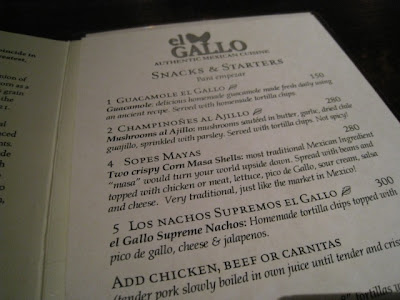 They even offer a weekend brunch. 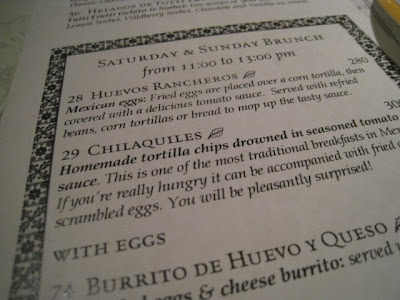 I was extremely excited about the enchiladas, as that is one of my favorite dishes back home and the guacamole. My love and familiarity with Mexican food is from Southern California, probably starting with family dinners at neighborhood restaurant El Paso Cantina in Torrance when I was a kid with their warm crispy chips and sweet, spicy salsa- continuing to discovering places like the awesome Mexican/Salvadorian Gloria's Cafe on Venice. In LA, often you get huge hot plates with pools of refried beans and rice almost overwhelming the enchiladas or chimichangas.

I've been to hole in the walls, taco stands, sit down family restaurants and chains, so I'm open to the variations that exist. With El Gallo having a Mexican chef/owner, I thought I'd have something that reminded me of home. But then a number of "different than my expectations" happened. 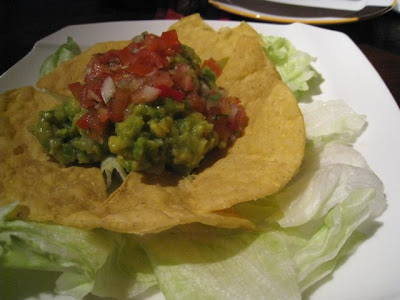 "Different than my expectations" number one was when the guacamole (NT$150) came and we tasted it, we could tell it was made with Taiwan avocados (which was confirmed when I asked the waitress). Taiwan avocados are just more stringy and less sweet and creamy than Haas avocados. While I know that Haas avocados are expensive here and not always in season, if I'm paying NT$150 for a tiny bowl of guacamole, then I want the real deal, or don't serve it. Or at least the waitress to ask "it's made with Taiwan avocados, is that ok?" But it was my fault for not asking.

"Different than my expectations" number two was that when the carnitas (NT$450) (or roasted pork) came they weren't spiced, browned and shredded. The flavors of the dish was very light. But this wasn't a big deal- it was still tender and nothing a little salsa couldn't fix. 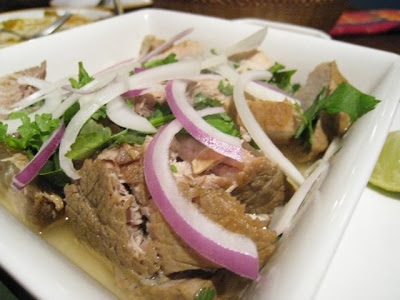 But "different than my expectations" number three when I bit into my enchiladas (NT$380) was the deal-breaker. The texture of the corn tortillas was chewy rather than soft and the sauce was like a thick salsa and I realized that the dish wasn't piping hot and it wasn't baked. 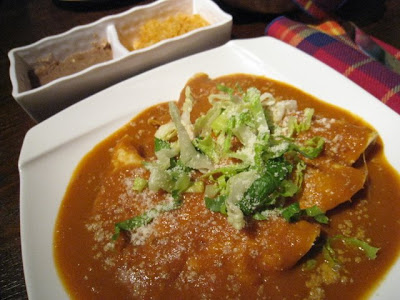 And wait, there wasn't any melted cheese anywhere.

I took a few more bites to convince myself that it had just been too long since I had an enchilada, but the textures, flavors and elements just didn't add up to be what I was craving. I even asked "aren't enchiladas usually baked?" and they said "no, they were pan fried and then served with sauce."

Huh. I've never had them not baked.

That night, I googled up a storm, extremely confused and I guess in some parts of Mexico that that IS how enchiladas are served? So perhaps El Gallo is a bit too authentic for me and people who are expecting Mexican American versions of Mexican food. Maybe it's sort of like people who come back to Taiwan and wonder where their favorite neighborhood Chinese restaurant's beef and broccoli or moo shu pork went? Even if we eat the original versions, our favorites are the incarnations that we've grown to love, a sort of comfort food that reminds us of home.

After that, I was a bit too disappointed to enjoy the rest of the food, which was decent, but I had really hoped for baked, cheesy enchiladas to eat. I think I might have been okay if I had ordered a burrito or tacos, as their rice and beans were not bad, although sort of randomly served. Some dishes, like mine, came with both. Others came with only one or the other.

There was a very spicy shrimp dish or Camarones a la Diabla... (NT$380) 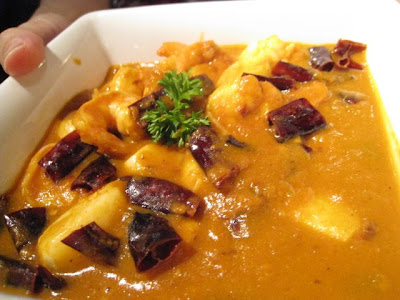 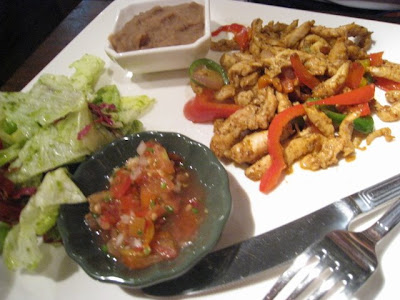 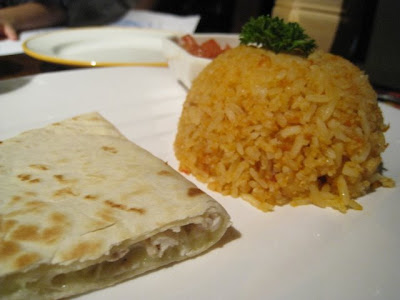 and a strawberry margarita. 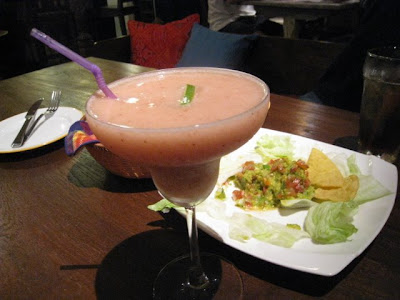 If I lived in the neighborhood, I'd definitely give them some more tries with other items on the menu, like the Carnitas Tamales or the Mexico City Steak, and I think they have a weekday lunch special, but they are just too far for me to make the trek without a special occasion. 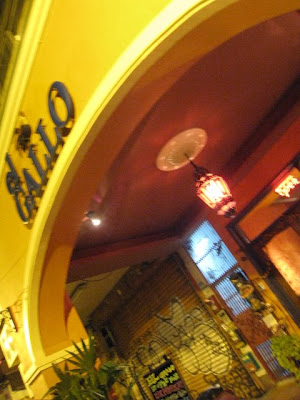 Email ThisBlogThis!Share to TwitterShare to FacebookShare to Pinterest
Labels: $$ depends on what you eat, area- tian mu, mexican

I've been served something green arriving at my table under the moniker "guacamole" several times, and I've always been left wondering where the dear people of Taiwan got such deranged ideas about guacamole.

Your post goes a long way to answering my question, thanks.

Looks high end and interesting! At first I thought by the looks of the menu and everything that it would be pretty good and authentic but your photos show the results! The guacamole is interesting- I like how it is served in a chip bowl. But I wonder why salsa is on top of it...

We have just added your latest post "Cookbooks for Chinese Food" to our Food Directory . You can check the inclusion of the post here . We are delighted to invite you to submit all your future posts to the directory for getting a huge base of visitors to your website and gaining a valuable backlink to your site.

under sundog: yes.. it just doesn't taste the same, right? even worse is when it seems like it was squirted out of a tube. thanks for commenting!

eatTravelEat: yeah.. I didn't mind the salsa on top of the guac, but I just wish the Mexican restaurants in town would just stick to using Haas avocados when it's in season.

You know, I saw an episode of Anthony Bourdain's No Reservations when he when to visit a small town in Mexico where one of his cooks was from. His mother made a big feast for the American guest and she prepared her enchiladas in a similar manner to what you described. She rolled out the fresh made, thick tortillas, grilled them in a frying pan with a little oil, then folded them onto a plate and poured sauce over them. Definitely not what we're used to as Southwest or Tex-Mex food. But it still looked good and Bourdain loved it.

Did you ever try the Mexican options at Omelet to Go? Kind of a limited selection since it's not a Mexican restaurant per se, but everything we had was always really, really good. And that's with a Taiwanese dude cooking. =)

Thats to bad you had a bad experience at El Gallo! I haven't tried it yet but have been wanting to. I actually just got back to TPE and know what you mean about the Guac made with Taiwanese Avacadoes. Just not the same...the pics of the food look pretty decent, but I hate it when restaurant serve rice in a upside down bowl form. To me it just looks well...cheap? haha

billy: i have no doubt that fresh out of the frying pan that it was probably fantastic. at El Gallo, it was ok. have you been? curious to know what others who have eaten there think. but I don't consider my expectations Tex-Mex or Southwestern.. maybe California Mexican? The hole in the wall places I've been to in LA are definitely not Tex Mex.

abstractpoet: Yes! I did. I really liked their burritos for awhile. They were spiced right and not crazy expensive. I should go back there sometime.

dlin: Yeah.. not a bad experience, just not a great one, I suppose. Let me know what you think if you ever try it! haha. the upside down bowl of rice didn't bug me, just the seeming randomness of who got rice and who got beans or both. why not just give everyone rice AND beans if it's such a small amount?

Oh the tender green tendrils of hope for a decent Mexican place in Taiwan at long last crushed again.

Hey,
shouldn't the restaurant be on Zhongshan North Road?

The restaurant is on Zhongshan North Road, Section 7, not Zhongxiao. Important distinction, as the two roads are at the opposite ends of town!

angelica: thanks for feeling my pain!! :)

anonymous/Maoman: thanks for catching that! i've just corrected it..

I'm going out on a limb and I'm gonna say that Taco Bell is better than most Mexican food in Taiwan.

That said, thanks for the Good Day post, I went afterwards and found it very acceptable in a Taco Bell-ish kinda way.

I can't tell you what kind of heaven I was in with the burrito I got from the Mission District in SF. Watching them make them with a big pile of halved avocados behind them, and then they just scoop the whole thing out straight into the burrito. And then the big dollop of sour cream which is like a little treasure when you bite into it. Drool, drool, drool.

You gotta try "La Casita". Beyond awesome. Whenever I get up to Taipei, its the only mexican I'll eat!

Ive been to el Gallo recently. I'm truly impressed with everything, they not only have one mexican chef, they have two, and the dishes they come up with are extraordinary. Try some regional stuff from Veracruz, like the fish dish they have, or their mole, truly genuine, Ive seen great reviews of this restaurant on tv recently, i greatly recommend it.

Pretty sure this place is closed now.