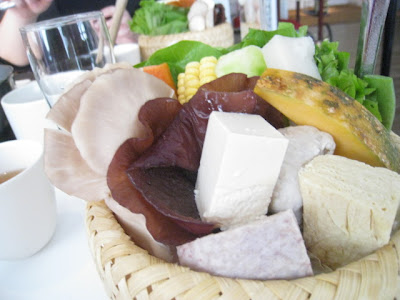 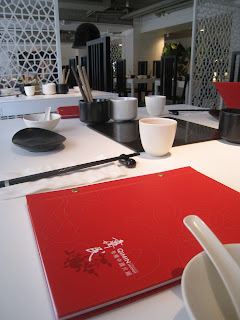 If you're crazy about organic foods and don't mind paying a premium for it, then Qi-Min Organic Hotpot is the place for you. I had passed by Qimin many, many times, but always thought it was too pricey to eat at. My friend wanted to check it one day while craving hot pot, so we agreed to go.

A lone menu and staircase is the only sign that there's a restaurant upstairs. Before you get to the actual restaurant, there is a room with display cases of their organic goods, as they also have a home delivery service of meats and vegetables you can use to cook with at home. Their motto is "from farm to table" which is also a movement going on in the States, eating more things grown locally. 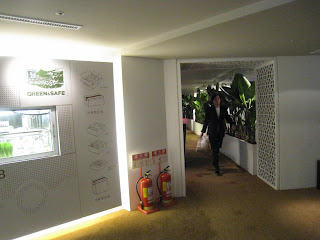 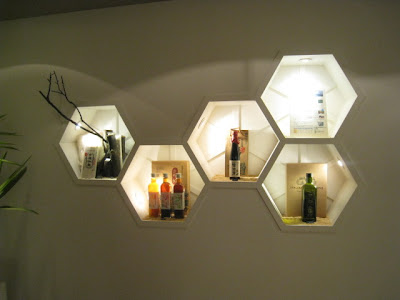 Once you step in, the atmosphere has to be one of the most spartan and regal hot pot places I've ever seen. 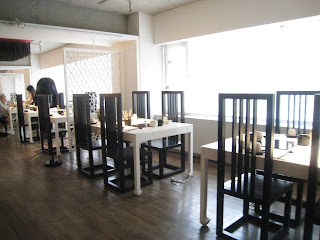 Their set menu runs from NT$600- NT$2680(! for two) which includes seasonal appetizer, a choice of broth, a basket of seasonal organic greens, your main protein, a choice of two sauces, a choice of starch and vinegar disgestif and dessert. There's also an English and Chinese menu full of pictures of additional or ala carte sides you can add such as dumplings, squid balls, veggies, seafood. 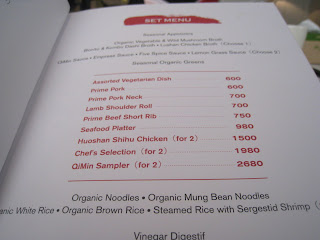 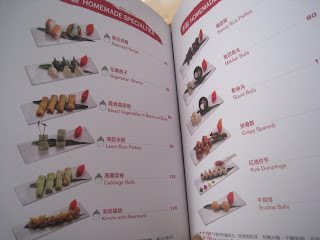 I ended up choosing the Prime Beef Shortrib in the Organic Vegetable and Mushroom Broth, with Qimin and Lemongrass sauces. There's also a bonito and dashi broth or a Lushan Chicken broth. 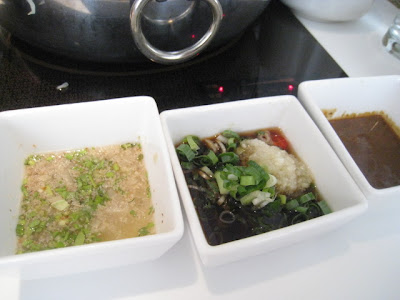 The appetizer was delicate and stylishly presented. The bite of pork I had was good. 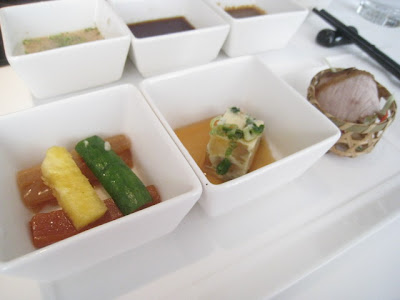 We chatted and waited for our water to boil. For hard core shabu-shabu'ers, you should cook the meat first and then throw in the veggies. But we were hungry, so put in some veggies first. 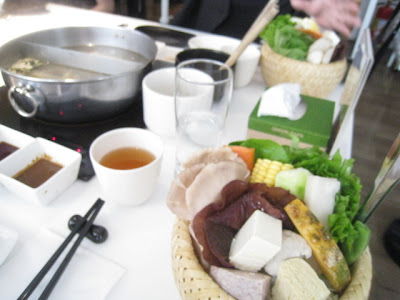 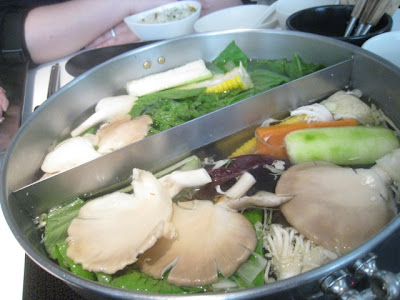 Once in awhile, nature sounds from a CD they played would come on the speakers. My friend was startled by the frog sounds that came out of the blue- we all giggled at her reaction.

I was pleasantly surprised at the amount of meat I got. Long sizeable slices that made for some delicious beef consumption. 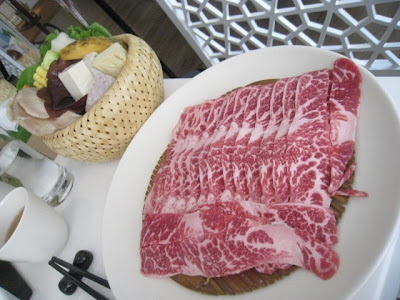 I was going to get the Organic Noodles for my starch, but the picture in the menu looked like such a small amount, I got what my friend who had been here before got- the Steamed Rice with Shrimp. Good call. 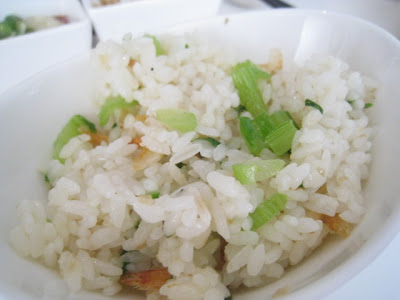 The Lemongrass sauce gave the meat and vegetable a sour, citrus flavor that I haven't had with hotpot before.. double dipping it in the lemongrass and the soysauce and garlic flavor gave the right salty, fragrant kick. At Qimin Hotpot, it's quality over quantity, so I savored the food I got, instead of wolfing down everything like I usually do at all-you-can-eat shabu shabu Momo Paradise. 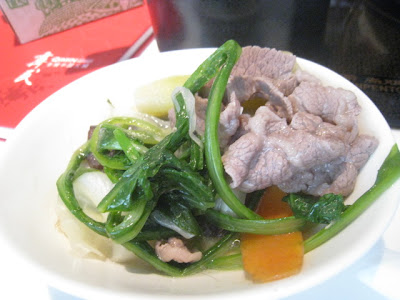 The lunch ended with a pumpkin pudding and plum-like vinegar drink. Both flavors I happen to dislike, so after a tiny bite and sip, I left it alone. 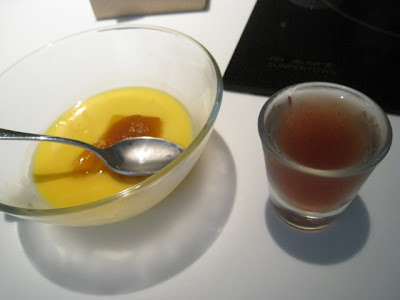 Would I go back? With so many hotpot options in town, probably not- there's mala spicy hotpot and the jazzier Orange hotpot if I want to splurge. Or even the mushroom overload Bai Gu Yuan, where the broth is so flavorful from the different mushrooms, it's good for even non-vegetarians. But if you've got an organic health nut friend you gotta impress, Qi-Min should do the trick.
Posted by joanh at 10:52 AM

Hey Joan, if you haven't already, you should check out this guy's photography...all about eating in Taipei :) http://www.flickr.com/photos/yusheng/sets/679140/

lin: yup, have seen it thanks! i think about uploading some pics to flickr sometimes, but it's like double the work!