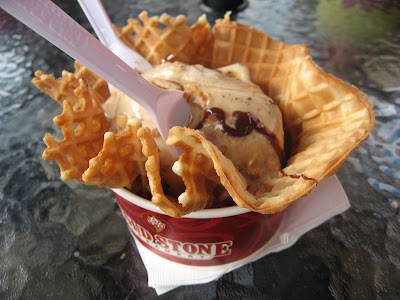 Nothing beats the heat like a nice ice cream cone and in Taipei, the humidity comes earlier than most summers. That's why I predict Coldstone's will be around for quite awhile. It's got more variation than the established Haagen Daaz and though it's sweet, I feel like it's less heavy than Haagen Daaz as well. It's easier to find than the local Big Tom's chain and got more pizazz than Movenpick. 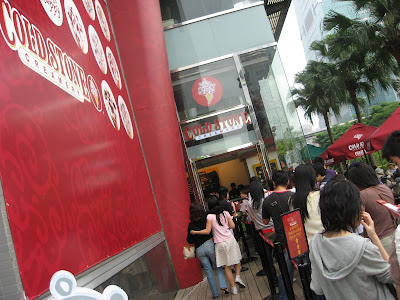 I heard about its opening through a friend's text message a few weeks ago and when I passed by it on a busy Sunday afternoon, there must have been at least 40 people in line. A little googling showed that the same company (PSCP) that operates McDs, Mister Donut and Starbucks here plans to open more Coldstone stores in Taiwan in the next 7 years. So maybe it's time to buy your stock in Coldstone. Even though most of the people I see here are so darn skinny, I know they have a sweet tooth too! 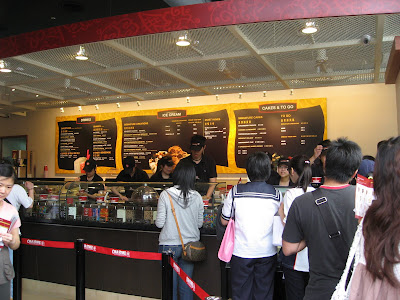 While you're waiting in line, try and snag a copy of their menu which is full of pictures and ice cream w/ English and Chinese names like "Monkey Bites" or "Cookie Mintster", but the description is only in Chinese. You don't like their combos? You can also make up your own. 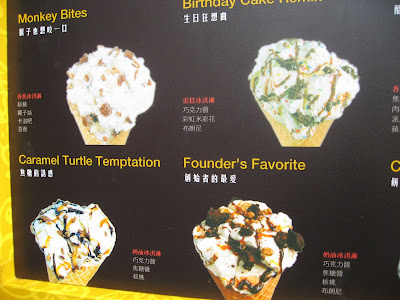 So if you want details on what is in the combos (or do your homework on the website), ask one of their servers who are taking the orders. Ours had quite good English, and the servers at the counter- not so much. I sampled a dark chocolate flavor ice cream and asked him what flavor it was, and he didn't know the English name. 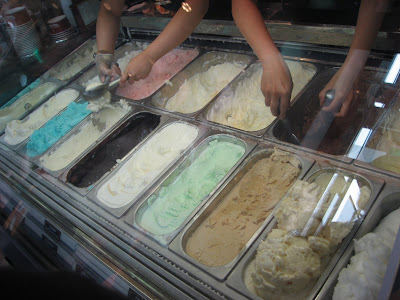 One you've placed your order, one of the many servers will scoop up your ice cream, mix in your choice toppings on the cold slab on the counter, and then scoop it back into your cup or waffle. I got a medium Mud Pie (which came with coffee ice cream mixed with fudge, peanut butter and almonds) with a waffle cone to share with a friend (NT$160 + NT$20). It's definitley not cheap, but soften the blow by sharing with a friend or getting a single scoop with one mix in (NT$90). 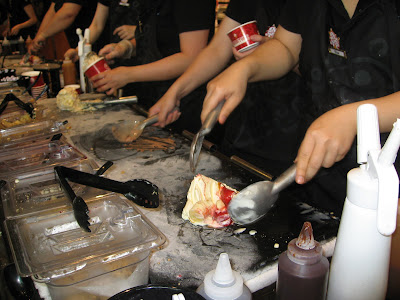 There were at least seven servers behind the counter buzzing about so the line went fairly quickly and occasionally they would burst into song, which I've heard is their trademark in the states. 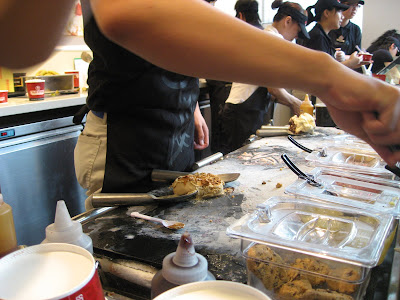 Pay, get your stuff, and then eat on the go, or try and get one of the very few tables inside, or slightly more tables outside. Or if you have a whole team of eaters, have someone else grab a table while you wait in line. We had to wait a little while for them to make our waffle cone and wait for it to cool so it didn't melt our ice cream creation. It was a little softer than I would have normally liked, but it was still sweet and coffee-chocolately goodness.

So if you've had your fill of Ice Monster mango ice, then head over to get some Coldstone. Go on a weekday and you might not even have to wait in line!

I wasn't sure if they had cakes, but how awesome would it be if they had Red Velvet cake in Taipei?? I would become a fat, but happy frequent customer.

four words... cookie dough ice cream! There is not much else that needs to be said. As an American living in Taiwan, I haven't been able to find my cookie dough ice cream, until now. I went two weeks ago (on a Monday night) and didn't have to wait in line. The service was good and most of them spoke English. Thank goodness for Cold Stone!

i think coldstone is a little too sweet for some reason but i do love the atmosphere and the fun of making your own ice cream flavor. speaking of red velvet cake, there's a cupcake bakery a friend of mine opened behind Eslite that might have red velvet cake. it's called Ginger, i cant' find the address though!

shannon: Hi! Thanks for your comment.. yeah I heard Coldstone's also has a cake batter flavor?

ffc: haha, speaking of Ginjer, I just went there the other day and will post a review soon. the website is ginjer.com and the address is No. 20, Lane 233, Tun Hwa S. Rd, Sec 1 and I didn't see any red velvet!

I LOVE Birthday Cake Remix, and the Strawberry Blonde!!! The Banana ones are really good too... I was hoping that being in Asia, they'd have cool asian flavors and combos... like green teas and added in red beans, etc.. and MOCHI pieces (yum!) MAYBE eventually..

miss tiffie: i'll have to try those! nope, i guess there are too many of those already- azabo sabo has a lot of crazy ice cream, red bean, ice mix type desserts! you should check them out.

no wonder i couldn't find it, spelling Ginger with a j is way to confusing. I just talked to the girl who opened it and she said they only had red velvet at chinese new year. that doesn't really make sense to me since red velvet is THE staple cupcake at Sprinkles but oh well! I saw a red velvet cake last time i was at ralphs, yummm . . i think that'll be the next birthday cake.

ffc: you gotta get your red velvet bday cake from Auntie Em's in Eagle Rock! I wonder if the Ralph's one is any good!

My 80+ year old grandpa insists on going to Coldstone every time he visits from Taiwan. I think they're going to do very well there.

Stop!! First the pastrami and now coldstones! I can't read this blog anymore. It's making me too hungry!

Would you say this is your fave ice cream place in Taipei? I haven't been yet (insane queues!) but am wondering how it is... I tend to like my ice cream simple and not mixed with a bunch of stuff... Have you been to Big Tom's? How would you compare the two?

i think the prices in taiwan are probably comparable to prices in US for coldstone (equally expensive).... i like the coffee, twix and caramel (my own combo)...

if you tip them do they sing like they do in the US?

chubbypanda: that's awesome! now he'll get to eat it here!

daddy alex: at least you will get to eat coldstone's here, sorry about the pastrami!!!

mei: hi! the lines aren't so bad on weekdays.. I have had Big Tom's.. I'd say.. hmm, Coldstone's is probably sweeter though you can get it not mixed in. I liked the waffle at Big Tom's!

jean: yes, they sang here- I don't if it's because someone tipped them or because they were entertaining the long line. i think it's more of a value than haagen daaz here.

I've been there twice and I'm SO glad Cold Stone has finally come to Taiwan! I love the peanut butter cup perfection. BTW, they DO sing if you tip them, but you have to make a big show of it because otherwise they don't notice. They do seem to happily break out into song every once in a while, even without a tip, though! Isn't it interesting--100 seems like a LOT to fork out at Haagen Dazs, but 110 at Cold Stone seems like a pretty good deal.

oh coldstone is so good. I used to go there all the time when i was working at an californian camp near santa cruz. We have a version called cold rock here in Australia, but it isn't the same...

j'adore: yeah- i totally i agree about haagen daaz vs coldstones. i think it's because you're getting a mix in and a larger scoop! plus they are friendlier

susan: hi! yeah, copycats never are the same as the original.