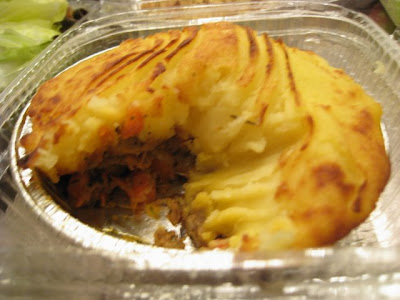 Kid friendliness: tiny space. Reservations necessary. Not a lot of room for strollers.

I was super excited to try out this place after reading about it at haochr. After all, who the heck sells pot pies in Taipei? Well, Costco did for awhile, but they were not very good- the crust of the chicken pot pies was not bad, but there was not enough sauce/gravy inside with all the chicken and vegetables.

So I swung by one rainy afternoon around 2pm and was very surprised to find it PACKED. I figured it was after lunch hour, but apparently they are also very popular for afternoon tea (with their hot apple walnut crumble or brownie) in their cozy space with about 8 tables. There was one open table, but it had already been reserved. The manager said that it's best to call and make a reservation/check.

No worries... I ordered some to go. A shepherd's pie (NT$180), a chicken pot pie (NT$150) and a apple walnut crumble (NT$150). Their English Chinese menu also offers fish and chips, English breakfasts (with eggs, bacon, sausage, tomatoes, bread and coffee or tea). A 10-15 minute wait later, I got two brown paper bags to take home. After paying I realized too late, that I wanted to get the ala carte chicken pot pie for NT$100, but they had given and charged me for the regular set (with side salad & garlic bread). You could also opt for the full set with soup, salad and coffee/tea for NT$280. 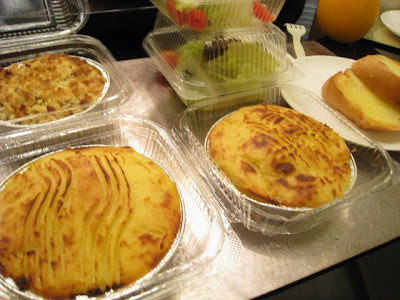 Getting home, my first impressions were that the pot pies were tiny. Smaller than I expected. Maybe because they packed it with the garlic bread, but it was barely larger in width than the slice of bread. My second thoughts were that I was disappointed that the chicken pot pie did not have a flaky crust- instead it was also covered with mashed potatoes (like shepherd's pie traditionally is). 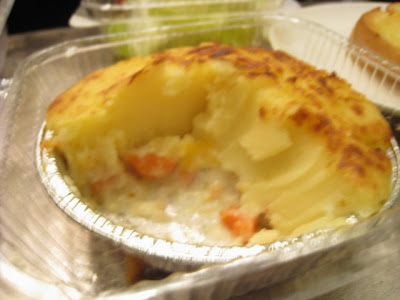 The salad greens had a light vinaigrette that was a good balance to the heaviness of the pot pie. If I had to order again, I would order the chicken and mushroom pot pie over the shepherd's pie (which has lamb), but overall, there was too much mashed potato and not enough meat and veggies for my personal taste. Don't know if this is different from the pot pies they make for the in-restaurant servings or if the portions are bigger. It would be good if I was craving mashed potatoes, but not quite the picture of a chicken pot pie I had in my mind.

On the other hand, the apple and walnut crumble was delicious. I know it would have tasted awesome out of the oven at the cafe, but it was still warm and sweet with chunky diced apples and a sprinkling of walnuts. I would strongly recommend this for anyone who loves apple pie or wants a warm healthy-ish dessert.

I've heard of other pot pie places around Taipei- Pie Boy and Frankie's? It's interesting that they are all sprouting up around town. Anyone been to the other ones and can say which is their favorite between the three?
Posted by joanh at 3:09 PM

Email ThisBlogThis!Share to TwitterShare to FacebookShare to Pinterest
Labels: $ can't be beat, $$ depends on what you eat, afternoon tea, breakfast/brunch, dessert, western

A friend and I tried this place last week and had reactions similar to yours... the dessert was pretty good, but the signature dish was a bit of a let-down. Your to-go chicken pot pie doesn't look much smaller than the one I had in the restaurant, so I'm guessing they're close in size. I was disappointed about the potatoes, too, especially since they dominated the dish. This might be something to try a couple of times in a year, but I don't feel drawn to try the pot pie again... maybe the fish and chips next time!

farfromfrostburg: hi! thanks for the 2nd opinion... yeah. If they put in more meat and veggies to balance the potatoes, then it would be a lot better. The fish and chips did look good. :)

When I get Shepherd's pie back home it usually comes with that much mashed potato so I was over the moon to find this place in Taipei. The lamb is super tasty so I would certainly be happy with more. The apple crumble is just to die for, probably my favourite dessert in Taipei :-)

(on that note, how about an overview post of your favourite desserts in Taipei)

Pie Boy, serves New Zealand meat pie. Its a small restaurant, small menu. Only opened few weeks ago. Last time I had the minced beef pie (4 varieties to choose). Flaky pie crust but it was a little soggy for some reason. Pies are kept in a warmer, maybe. I will give it another try.
Zhong Xiao E. Rd. sec 3, lane 251 alley 3, #1. Near the new green SOGO,
2773-2881

Joanh, I was surprised by the lack of an actual pie crust too, but at least in the dead of winter, I thought the shepherd's pie totally hit the spot. It's probably the sort of thing you need to be in the mood for, though.

I thought the fish and chips were just OK (though I think my wife liked it), and the full English breakfast was myeh. So really I'm just a fan of the shepherd's pie and the apple dessert.

nesiote: Hmm, thanks for the experienced opinion. I've only had American style Shepherd's pie, so it's slightly different.. It's a good idea for overall fav desserts.. maybe after I'm done catching up on my backlog!!! :) Right now with the warmer weather, it's shaved ice!

ron wu: cool.. thanks for the info. will have to venture over there eventually..

abstractpoet: we are surfing the web at the same midnight hour. :) i saw your guys' review about the english breakfast.. i did feel like shepherd's pie, but also like crusty chicken pie, so 2 mashed toppings was a bit much for me. the apple dessert WAS really good.

If you want a real pot pie, you should really try Frankie's. The pie is not very big either, but it is filling. Frankie's quiche is one of the best I've had in Taipei, especially considering how reasonble the price is.

Taipei Times just ran an article about the place, read it for yourself. Better yet, just go to Frankie's and try the pies and quiche.

I've now tried both Frankie's and Pie Boy. I did like both but I have to give a slight edge to Pie Boy for the following reasons.

First, I thought the pastry was better than at Frankie's. The flavors were a bit more savory too. And the location can't be beat, off of ZhongXiao close to FuXing.

I had the 'minced meat' pie. It was nice, so nice that I wanted another one but I took a steak and cheese pie to go.

I'll give this to Frankie, his pies are filled up, while there is a little less inside one of Pie Boy's pies.

You are probably right that the pies are a little small (especially the take out pot pie version). But I find them filling enough. Compared to the same pies you get in England they are very very small. However, the food is not bad. If are hungry try their English Breakfast (served all day). Anyway, you can see my comments on this restaurant here:

Hi, first forgive me on my english and it wasnt excellent. I was searching for the potpie website then I saw your blogs and starting reading your item. Then I click your link website of potpie. Though I will try british foods this time. Then I saw Maggie again the same owner of Le bistro de L' Olivier french cuisine in An-he Road. Though this potpie it would be the same quality and taste of her french restaurant. Only their desserts taste better. But the main course is just xoxo and you would not probably able come back to dine again, and you will feel dissapointed, not only her foods is xoxo and its so expensive. If me I will never recomended this restaurant to anyone will kill your bill only. Its okay if her foods is taste delicious.Thanks for sharing your experience in this restaurant. I would never plan to eat in this restaurant specially the owner is Maggie again. Maybe you can try Swedish restuarant and their are excellent you would not dissapointed in this restaurant, infact we always come here just last Saturday. And it become one of our first choice in Taipie. Just wanna share to you, just visit their website http://www.flavors.com.tw/
Also you can visit this webshots links:http://home-and-garden.webshots.com/photo/2340626280102585871KDbAIx

Well, thats what you get for going to a british restaurant: notoriously bad food.