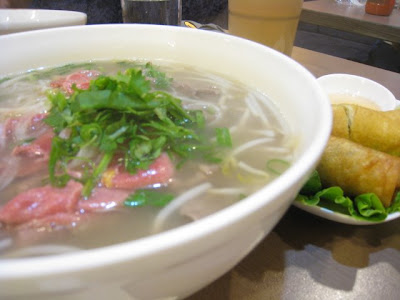 Thank you, thank you to readers Virginia and Joshua for telling me about Pho Hoa. It is by far the best pho I've had in Taipei and quite comparable to the pho joints that I frequent in LA. I owe you guys, seriously. 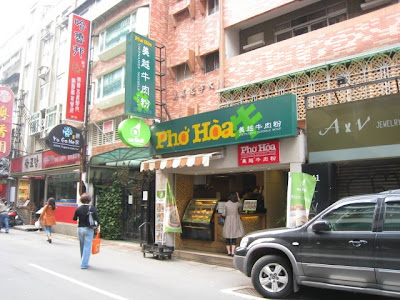 Why is it so good? I don't know. Supposedly, they used to be a part of the chain Pho Hoa according to a November 2000 Taipei Times article (but no longer? They are not mentioned on Pho Hoa's official website). But maybe they retained the secret recipes and standardization that makes it so different from adjusted-for-Taiwanese-customers eateries.

And apparently the Taiwanese customers don't mind. We walked in around 2:30pm and it was packed full. We ordered while we waited and were shortly seated among the 30 or seats in the clean, modern and air conditioned space with a semi-open kitchen in the back. 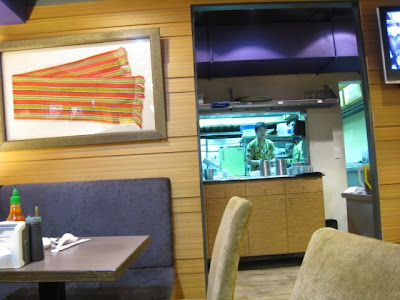 The menu is in English and Chinese at the front counter and you pay before you sit down. I think I saw some hidden plastic menus with pictures too, in case you don't know what the different kinds of pho available are. Basically you can get it with hot soup with various meat toppings or dry with chicken, shrimp or pork chop, in small or large sizes (NT$120-$180). It's more expensive than the mom and pop places, but here, you know what you are getting and I think you get your money's worth. They also have Vietnamese coffee or milk tea (NT$50) and soft drinks.

They offer fried spring rolls (no summer rolls) which are served hot and crispy with ground meat, glass noodles and chopped veggies. It's not a steal at 2 for NT$80, but good if you are craving it. They also have sliced papaya salad (NT$35) and limited starters. 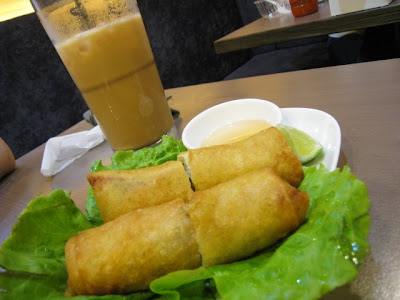 Most importantly, Pho Hoa uses the skinny rice pho noodles, rather than the wide noodles I've been seeing everywhere. Their broth in the soup pho is a right combination of salty sweetness flavors and depth- not too oily or murky. 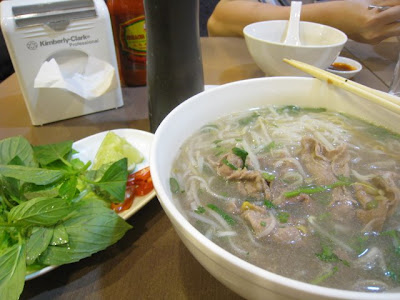 I like getting a big bowl of rare steak pho (NT$160) and watching the thin slices cook in the broth before I eat it, squeezing a bit of lime, tearing up some basil and adding some of the sweet hoisin sauce into the broth. 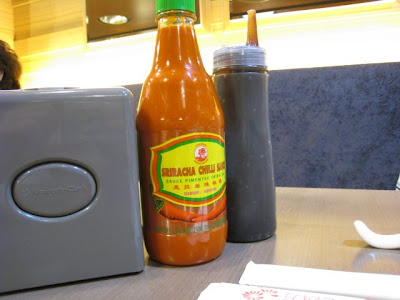 The dry phos (NT$120-150) are not served cold, but with warm, slightly wet noodles, with a side bowl of hot soup. There are crushed peanuts, pickled cucumbers, cilantro and sprouts side by side with the sliced pork chops (which have been marinated in basil?) and all the flavors again mesh well together and you just want to inhale the whole bowl. 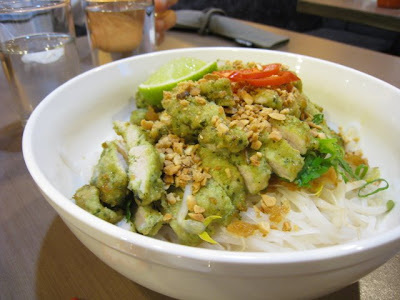 I was kind of weirded out by the green appearance of the pork, but it quickly faded as I took my first bite. It was SO good.

I took some friends back to Pho Hoa the next day so I could order that dish again. With more people, I got to check out the dry shrimp pho and dry shredded chicken pho dishes. While it was pretty full when we got there, it emptied up and then filled up again with customers, though it was into 2-3pm in the afternoon.

Maybe I was just too pho-deprived, but it was still really good, two days in a row. My friends agreed it was one of the better bowls of pho they've had in Taipei, too.

Also, interestingly enough, they have a Mr. Roll area in the front where they sell mixed rolls "from California." Didn't get to try that, but in case you are craving California rolls you could check it out.
Posted by joanh at 4:44 PM

Hi. Your blog, I found an article about Japan
Do you like Japanese foods and fashion?
If you are interested in Japan, there is a link to my site please.
Japanese culture (for example, Japanese healty food, animation, games) here.
http://japanesefood-cultuer-history-anime.blogspot.com/
E-Mail/bunbungirl888@yahoo.co.jp

I swear, every time I see you update your blog, my appetite just grows (except for those waffles. So sorry you haven't had a chance to find a worthy waffle house).

That's it. I'm getting Pho this weekend!

humble reading: thanks!! i was sad no one was commenting, so you made my day. :)

I have not been there since changed hand. From the look of the pictures, its not the same as it was. Too bad, I used to love that place.

joanh, my comment was based on your pictures. So to answer your question fairly, I visited the place today for the first time. I ordered the same dish I would normally have - Noodle soup with brisket. The broth was the same quality. The meat was OK but a little more chewy. The minuses, bean sprouts should be served in the garnish plate and dunk it in the broth at the table to keep its crispiness. Noodle was over cooked or pre-cooked and had sat around for awhile. I did not care for the fancy decor, seems out of place from what they serve. I won't go for beef noodle soup at The Hyatt. Price was the same but portion is halfed. I don't mind pay more but don't cut portions. Where is that Mr. Roll come from ?
Now I really miss the old place.

ron wu: hi! Thanks for the response... Since I hadn't been there before, I can't compare, but I can totally see how you have something to miss..

Personally, I like the more modern decor and I like bean sprouts more well done than not, so it works for me. Especially in contrast to all my un-pho like experiences in Taipei. Could you recommend another pho place in Taipei that you'd go to?

hummm.... none at the moment. I will let you know when I do find one that I think its worth a try.

This looks really good! I love pho and was on a constant lookout for good pho places, but could never seem to find any decent ones. I'm sad that we left before I got to try this place! Guess this'll give me a good reason to come back and visit.

Phoa Hoa has also a huge following here in the Manila and one of my favorite is their fried rice. Theirs is the kind that will make you want to order another bowl (油而不膩，爽口). When I'm at Pho Hoa, I would order there grilled chicken with spring rolls as side dish and Vietnamese fried rice. They have this fish sauce (we even bought one home) that's not too salty and definitely complement their grilled foods.
However, the price is a bit high considering the set grilled chicken rice meal would cost at approximately NT$155 not including taxes. But for the love of their food, it's well worth it.
This is the only Vietnamese resto that my mom (traditional Chinese food lover) would go and eat without hesitation...
If their menu is all the same, why not try their grilled chicken or pork...

Ok, I am here on a business trip and craving for some Vietnamese Pho in Taipei and I have tried a few places and none lived up to the name "Vietnamese Pho". I went to this place yesterday (Sun) per recommendation from this site and yes, it was crowded, small but I guess this is Taipei. Simply put it, I would not go back here again. It's not Pho. The soup was too bland, the beef broth has no smell or taste of the beef bone marrow and beef. Not sure what they put in there and still missing a few key ingredients that make it tastes and smells like Pho. I would call this "localized Pho".. :) There are quite a few Vietmaneses living here and yet, no one has any info of a good place to eat, so sad... Plus, the vegetable dish is pathetic.. a few leaves, no beans sprouts, missing two other vegies for Pho too. I guess if this is the best Pho in Taipei then everyone is loosing out big time.

There is a yellow sign that says "Pho." It's nice and clean inside and has a decent selection of Vietnamese food. My friend is a regular and goes 5 times a week and claims that their curry there is really good.

I tried their rare steak and brisket Pho and it was pretty good. One thing they do have there that Pho Hoa doesn't have (besides curry) is that they use real Sriracha Sauce!

Anyhow, when you have time I think their place is worth checking out. But don't get me wrong, Pho Hoa is still a really good Pho place in Taipei!

Yummy. That food looks so delicious. I love ethnic food.

What a great article! I've never tryed PHO but I hear it's amazing for you!

tintin: cool! thanks for commenting

phu: i'm not sure if this would be localized pho, more like california-ized pho. the localized pho is even more different... but i'll keep trying other places for you to check out. hopefully you can let us know what your favorite is!

richard: i have been looking at some pictures from your recommendation and it looks good!!! i'm excited to give it a try- maybe this week... and they have banh mi sandwiches!

Hi Joanh, I am from Cali, Southern Cal to be more specific and that that Pho Hoa in Taipei is definitely not california-localized. If you think so, you must have been to the wrong place. Plus Pho Hoa in cali is not the same and not as authentic as the orginal one in Vietnam. I know b/c I have been to both places recently. There are plenty good one in OC. LA do not have good Pho as I used to live there too.

I still cannot find a good one in Taipei. However, I did visit that Pho in in Eslite, level B2 you mentioned, at least the broth has more taste than the fake Pho Hoa.. :) I must admit, the meat is definitely local and exactly the same as the other food stands nearby and in other malls. Must be from the same "factory and cuts". If you put in more fresh chili, it will help.. :)

Still looking as I don't speak Chinese so it's hard to find. Actually, in Hsinchu, there was one place but I don't remember the names.

The search continue as I am still here for another week on this business trip.

Hello,
This an interesting blog post found.... Very nice information about chinese food..... Really its great. Thanks a lot for the share....

I've been here in Taipei for nearly 12 years now and Pho Hoa is one of the best places for a bowl of pho noodles. I've been to HCMC in Vietnam and have had pho noodles there and this place gives the Vietnamese a good run for their money. The "Hwu Tse - Fai Chi", translated is train-plane, is my favorite. The broth is wonderful and rice noodles are authentic, not like some of the other Vietnamese restaurants I've tried here in TPE. Savoy near Tun Hua and Chang Chun is also a great place for pho. Give it a try and let me know.

Phu: I'm from So Cal too and it's comparable to places in LA. Maybe not too the places in Little Saigon, but I like it.

Bob: thanks for commenting! I did strongly recommend Savoy, before they named it that, under their Chinese name- Yue Yuan Pho

I'm also from S. Cal. Both Pho Hoa and Savoy (Yue Yuan Pho) are great places for a nice bowl of Vietnamese noodles. That area where Savoy is located (near Tun Hua and Chang Chun) is nice. Lots of places to choose from, some being pretty trendy or hipsterish. I like it!