revisited/breakfast/brunch: i do not recommend BRASSERIE (ala carte menu) 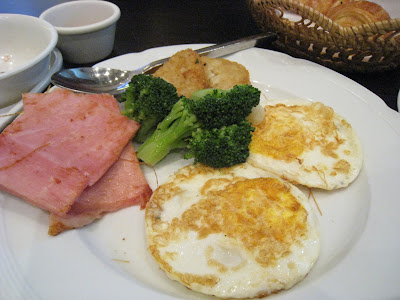 Trying to reconfirm the search and recapture the magic of my memories of a decent waffle in Taipei, I headed over to Grand Regent Formosa one morning. I don't know if my fuzzy memory served me incorrectly or that the hotel has just changed, but I can no longer vouch for the waffles there, much less their breakfast.

Okay.. a few years ago, when I went on the hunt for an American style breakfast, my cousin and I taxi'ed all over town to finally land at a hotel that would serve us breakfast past 10am. I remember driving up the steep hill and sitting in an open space which is why I thought it was for sure the Grand Regent Formosa.

But present day, Azie (their lounge-y restaurant) is not open for breakfast so we're directed towards their buffet, Brasserie, which already feels not right.

But we still forge ahead, we're here, we're hungry and we'll check it out. We don't have the appetite for the full buffet breakfast, and they do have an ala carte breakfast menu. It's not a bad price for a hotel eatery, but later on after we get our food, I suspect it's because they just plate stuff that is being served from the buffet! 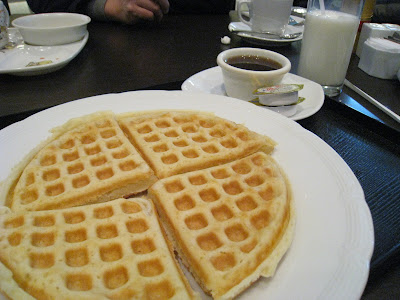 The waffles were cakey and dense, far from the crispy lightness I remember from so long ago. I think I saw the waitress bring it from the buffet waffle chef. It's made to order, but the batter is just too thick for the waffle to be fluffy. I barely finish one quarter of the waffle and leave the rest on the plate.

The eggs (pictured first) are overdone and inedibly dry, and served with a side of broccoli (for breakfast?), reheated triangle hash browns and dry slices of ham.

The omelette was a tad better- a lot of ketchup helps too. 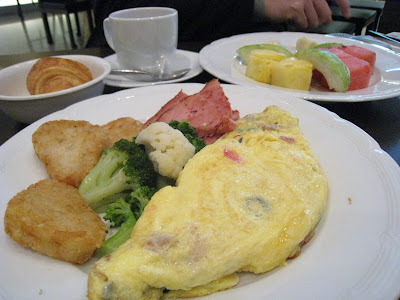 In the end, the hash browns (though probably frozen and reheated (not even refried)) are the best thing even though even they aren't good.

I can't say if the food we ordered reflects on the food at the buffet, but it has to a little bit if it's coming from the same kitchen, right?

Because it's a buffet setting, there's not really any service even though we ordered from the ala carte menu. I almost hope that since it's a fancy hotel that they would ask if there was anything wrong with our food when most of it is left on the plate, but they do not. I even dare ask the waitress if there is a different waffle available, to which she gives me a very confused look.

I guess it's back to making my own breakfasts.
Posted by joanh at 10:09 PM

Is it really called Brassiere? Cuz that would mean bra in French... bra as in bosom support.

lambchops: hahaha.. THANKS for pointing out my typo since i wrote that post in the wee hours of the morn. i've changed it.

There's an Irish pub next to Dan Ryan's called The Shannon that has a large breakfast set. Someone told me that it's really good but also very big. I'd like to try it sometime but if you get to if first please let us know how it is.

Hold up! Went by The Shannon the other day and saw that they have closed down. boo hoo