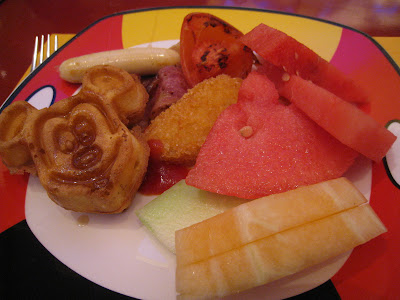 Last week, I went to Hong Kong Disneyland for the first time. I had heard horror stories about people cutting in line, how it was too small and it just wasn't the same. It wasn't the same- but that's okay. And I only got cut in front of once. Other than that, it was pretty awesome. A bizzaro Disneyland if you will.

There were NO lines at practically every ride- I went on two weekdays- and even though it was small, they had a lot of the main rides- Space Mountain, Dumbo Flying Elephants, Jungle Cruise, Autotopia, Mad Hatter Tea Cups. Autotopia had the longest line we waited in- half an hour. But every other ride was practically zero wait, just go to the front and hop on. You feel like you've accomplished something because you're able to check off all the rides, and you spend more time on the rides than waiting in line!

Everyone at the park and hotels were exceptionally friendly. I know that's their job to be friendly, but everyone was so pleasant and helpful that it just felt really *nice* especially in contrast to the matter of fact service that you sometimes get in Asia. 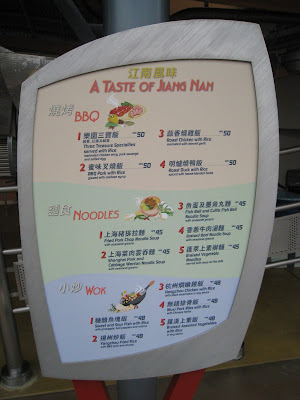 But what cracked me up was seeing all the Chinese food everywhere. It's too be expected since most of their visitors are gonna be Chinese. But Tomorrowland's cafe had a whole range of noodles, rice and beef noodle soups. 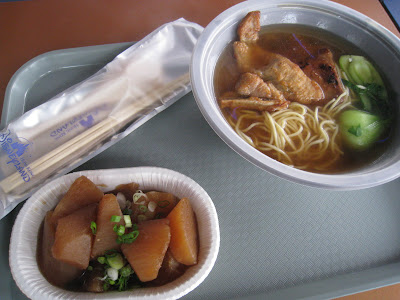 I chose pork chop noodle soup (HKD $45) with a side of braised radishes . Even though it was put together assembly line style, it still tasted pretty good. A lot better than the awful noodle soup I had the night before at the Asiaworld Expo for the Coldplay concert- proving that just because we're in Hong Kong doesn't mean all the Asian food is going to automatically be good. 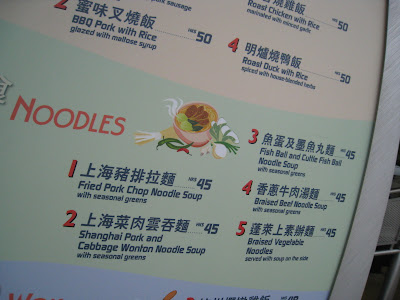 If you're going to be visiting, I'd advise eating the Chinese food over the American food. I don't remember the hot dogs and burgers at Disneyland OC being that good, but not this bad either. 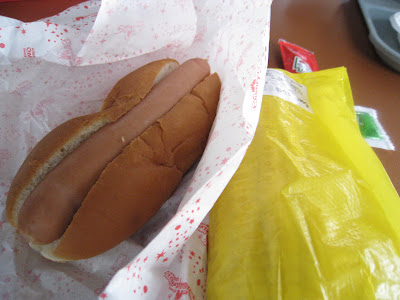 I take that back. The corn on the cob wasn't bad. It tasted like the kind you'd get from Church's Chicken or KFC. You'd find it at the vendors, alongside dried squid and squidballs on a stick. 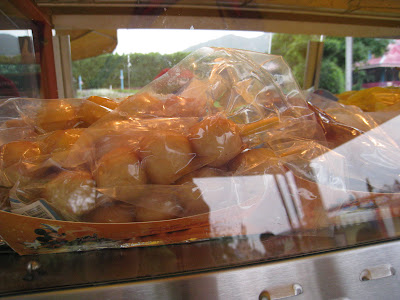 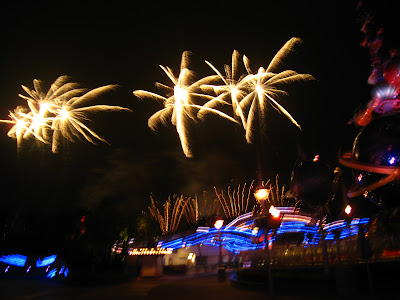 The park closed unbelievably early at 8pm, after the firework show, so we ended up eating dinner at Crystal Lotus in Disneyland Hotel. More Chinese food, but sit down style. It wasn't bad, but of course, a lot pricier (HKD $ 318/per person for set menu). 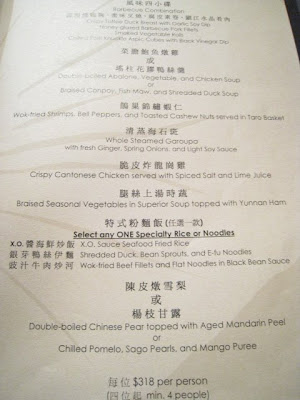 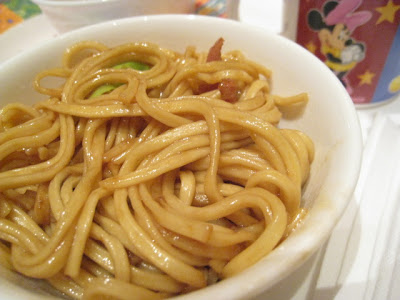 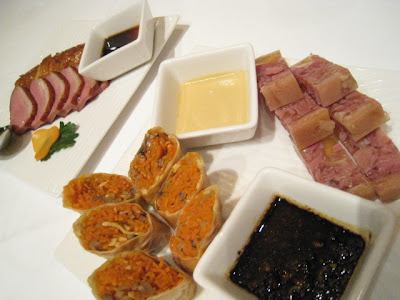 When we went we got the "Stay and Play" deal, where if you stayed at their hotel, you could buy 1 day at the park, get 1 day free. Pretty good for Disney lovers. I just checked and it's available until Sept 2009.

Maximize your Disney-fied stay by catching breakfast buffet at Chef Mickey's at Hollywood Hotel and Mickey Mouse waffles, or even better, meet Mickey and the gang at the Enchanted Forest at Disneyland Hotel where they'll wander around for photo ops while you eat. The Chef Mickey's breakfast buffet had Western style breakfasts, Chinese style dim sum and noodles, Indian curries and some Japanese offerings- as well as an array of pastries, fruit and juices. I sort of expected to see more food in Disney shapes, but the waffles were the only one. 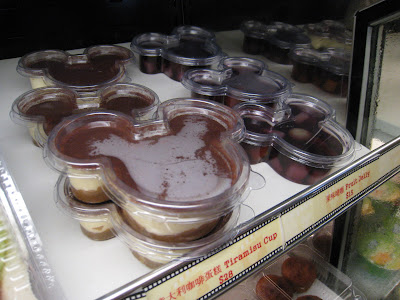 On the last day, I found a little to-go cafeteria shop in the back of Hollywood Hotel where you could get sandwiches, hot plates and tiramisu with the mouse ears. I don't know how it tasted, but it's amazing that just the shape of it makes it so cute and recognizable.

Been to Disneyland in CA 4 times and really fun. Stay at the Dineyland Hotel with food vouchers had best time ever along to Knott
Berry Farm vouchers. It was more a foodies trip for sure.

San Francisco Chinatown in dim sum shops have worst line cutters ever. Old people were so rude in pushing in front of me to get waited on. Shouted at them in Cantonese "you wait your turn like everyone else". Customers were glad I spoke up to them now counterperson tell them the same.

Autotopia is some how the most over-hyped ride in Disneyland HK. Always a line-up but the final result is painstakingly boring to say the least haha.

Well I like Japan Disneyland for it bigger and got more theme places in park. It next to their own Universal Studio like one in CA and Florida. Food is great. They have Mel Drive Inn in park like one in San Francisco much more than Hong Kong in rides and food places.

Check out Japan Disneyland web to see how good it is.

so jealous that you went to HK Disneyland that hot looks TERRIBLE. but i think that's awesome that they sell squidballs on carts. i guess they'd make more money selling chinese food rather than the turkey legs and churros they sell at Disneyland here.

Wow, this is certainly some great food and design! I like that there are so many better food options available at HK Disneyland compared to what I had at California Adventure. And I am happy to see some Mickey inspired items available, such as the Mickey shaped waffle- never seen that before!

I agree, it's pretty weird that the Disney Parks close so early these days! When I was at California Adventure, they closed at 7PM.

That was about the worst looking hot dog I've ever seen! Ugh! But at least you could get waffles shaped like Mickey Mouse's oversized head. :) It's nice to get consistently friendly service, and I'm glad to hear that you found it there. The food at Crystal Lotus looks delicious, and definitely worth the splurge. I've never thought to visit Hong Kong Disneyland, but it sounds like it was actually a lot of fun! Good to know!

It seem people in Hong Kong Disneyland are so in a hurry. Pushing almost trying to cut in line in everythings. Was not happy about it at all. Went to Japan Disneyland and it much better.

It bigger than HK one and no pushy people waiting for rides or buying food. Like the CA one too.

We also went to Hong Kong 2 months ago. It's such a great place. Nice blog and I get hungry just by looking at the pictures. You can also visit my HK chronicles of my trip at LivingTogetherBlog

Had to compare all three Disneyland I been to. One in Calif.,Hong Kong and Tokyo. Tokyo one got more things than HK and Universal Studio near by. Calif. one is lot of fun and enjoyed their Disney Hotel and restaurants in there.

Hong Kong was too small and still need to added more to park.

anonymous: man, i haven't been to Knott's in forever!

eugene kan: hahah. at least it's a long ride.

jeff: i do want to check out Tokyo Disneyland someday! i have only been to Japan once!

jean: i didn't see any churros, but they seem to sell pretty well at costco in taipei!

sapuche: it's worth the trip because you can ride a lot of rides if there is no wait. if i had to wait in line, i wouldn't go!

thea: thanks for reading and sharing your link!

nancy: since i grew up in LA, i never really hung out at the hotels at Disneyland.. but the HK Disneyland while small, you can get through the whole thing in 1 day.

I want to eat the buffet at HK disneyland, coz they doing a special offer till JUne 2009.....But dont really want to go inside the park, since went florida/california one and they were amazing soo amzing!!


So, just wondering, can i just eat buffet there without having to go inside the park? lol

All of the food are tempting. They sound scrumptious and healthy too! Always a winner as far as I'm concerned :) Keeps me pushing to the dining.

I will definitely take tones of photos there!!!