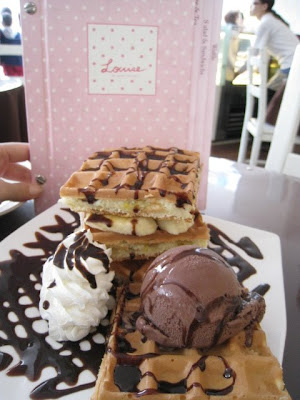 (This location is now CLOSED! One other location remaining at Fuxing Sogo)

Kid friendliness: lots to eat. no high chairs spotted though some room for strollers. near busy intersection though. only outside seating. 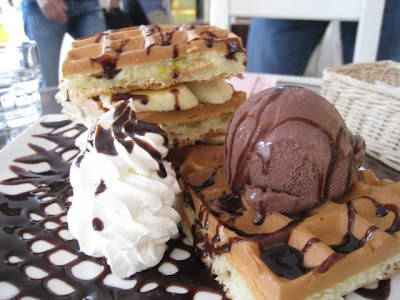 These waffles were a lot more cakey than I usually like my waffles, but Louise by Aunt Stella's is a cute corner of a cafe at the Shin Kong Mitsukoshi at Zhongshan Station to catch up with a friend over cakes, especially on a nice day.

I rarely get out to this part of town, but there's a lot going on on this busy street- there's also a McDonald's, Coldstones, Starbucks and Apple reseller nearby. 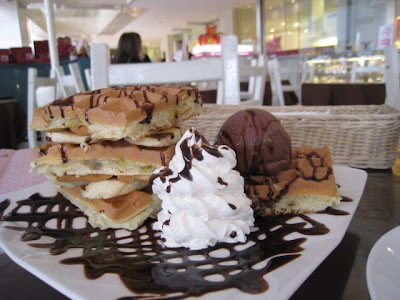 And apparently waffles are big on this side of town. Across the street tucked in the alley, apparently there is a place called Melange Cafe that serves waffles that often has a line outside of girls waiting.

Don't forget- in Taipei, waffles are more a dessert or for afternoon tea than for breakfast (if you couldn't tell by the ice cream and overload of chocolate syrup.)


View hungry in taipei restaurants in a larger map
Posted by joanh at 11:25 AM

yes melange is crazy!! last few times i've been there i've had to wait a good hour before i got a seat. The waffles are pretty darn good though thats for sure, they also have a nice tea and coffee selection. If you don't mind waiting it's definitly a place you can try

Oh my goodness. These look positively divine. I've never even heard of this place, so thank you very much for the heads-up.

yum!! that looks so good. are you on twitter btw?

This is near Zhongshan Station? Agh, I stayed in Zhongshan a few months ago and wish I'd known about this place! Of course, there's always next time. :) Your photos of the waffles are fantastic, and I can see why one would have this for dessert rather than breakfast! Maybe one should compromise and have it for brunch instead?

dlin: wow! were they worth the hour wait?

carrie: let me know how you like it if you go..

sapuche: right outside the Zhongshan station on the corner of the mitsukoshi mall. the rest of their menu is not that exciting but their cakes looked good

I think it depends if your really craving waffles! I was with some ppl that really worth so I didnt really have a choice hahaha...but it really is worth a try. I would try mon~thurs just before or after lunch if you can. I've heard they are "not" as busy during those times

looks really good! A suggestion: When you take a picture of something really big next time, can you put a coin or a dollar bill next to it as a reference. Keep up the good work!

dennis: yeah.. after 2 bites i was done since this was after lunch

dlin: i'm not as into cake-like waffles, so i'm not sure if i would tolerate the wait. maybe someday!

samihaha: yeah i've thought about that in the past, but usually i try to take the pics as quickly as possible and then dig into the food!

Louise by Aunt Stella's is now a Mr. Coffee! Heaven help us.

yeah, it's actually a mister donuts now... you can still find the original Louise at Fuxing Sogo next to the City Super in B3. New delish Waffles and new other stuff too~